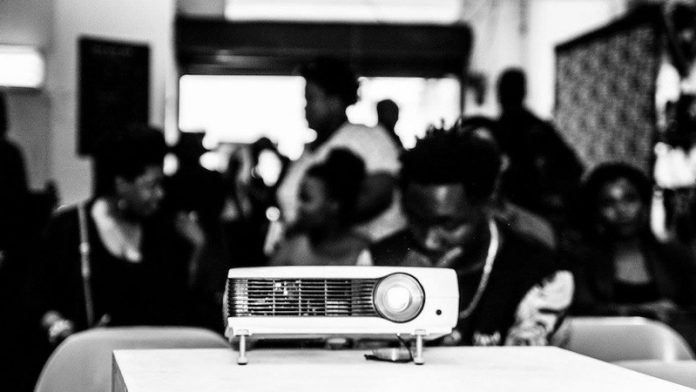 As part of the Open Design Festival, the Black Filmmakers’ Festival held a screening and discussion session in Cape Town’s City Hall, which Sarah Koopman attended.

What is the Black Filmmakers’ Festival?

What is the Open Design Festival?

For 12 days, Cape Town is involved in a citywide festival with a design focus. With an interactive platform, the aim is to bring people of all demographics into the Cape Town city centre to enjoy (mostly) free events and participate in celebrating and discussing different aspects of design.

So was there celebration and discussion with the BFFF?

Well, no, not really. The afternoon featured two screenings: the first was The Virgin Vegan by Reabetswe Moeti – a comedic take on a young woman who, after having lived abroad, returns home to save her family’s butchery business. But returning as a vegan throws that plan off course. Moeti says the film is loosely based on her own life – having studied abroad herself – and is a commentary on culture, tradition and the generation of young people growing up straddling them and their modern life. But there was no discussion on it. Which is a shame, considering the filmmaker was telling a story relevant to so many young South Africans. But Moeti could not be there on the day, so perhaps that’s why.

And the other film?

Sakhumzi Mati’s Township Life Is like a Dog was a depiction of “real life” in the townships where poverty and education exist inversely and crime is the consequence of this relationship. And the specific crime that took the spotlight in this film was rape – including the rape of a child – by three drunken men who aimlessly wander through the township causing trouble wherever they can.

And as audience members bowed their heads and shielded their eyes from the screen, the screams of the little girl being attacked filled the room with an icy silence. The larger narrative was unclear but it skirts around the story of a man (one of the three rapists) who abducts a woman and plans to rape her, but doesn’t. She makes him sign a document that is never revealed to the audience and, in the next scene, we see him attending a college doing legal studies.

The kicker is that the woman he abducted works at this college and she has flashbacks of her almost-rape but the film doesn’t deal with him having perpetrated the rape of a child or whether there is any redeeming factor in him. It was a glib skim over rape; chilling and unsettling.

But what about the discussion?

There were comments about the film being “raw” and “bold”. There was praise for the filmmaker. But there was no question about why there was no trigger warning about rape, which is one of the greatest threats to South African women and children’s safety. It was left unpunished and the perpetrator went on to nearly commit the crime again. Or about what it meant that the film ends with a quote on education by Nelson Mandela and the implication that if the rapist had been educated he would not have raped.

Does this beg for more critical audiences?

Definitively. At least in attempts to dissect the film, what it means, how it fits into the society we live in and what messages they perpetuate. “A film is not about how interesting the story is, but about the amount of conflict it creates,” said filmmaker Mike Dube, who was the special guest for the short discussion at the end of the screening. But, arguably, that conflict cannot be at the expense of the audience who could be left traumatised after consuming a film with absolutely no warning about its content.