Shabaka and the Ancestors’ music pays homage to the past, whilst looking ahead 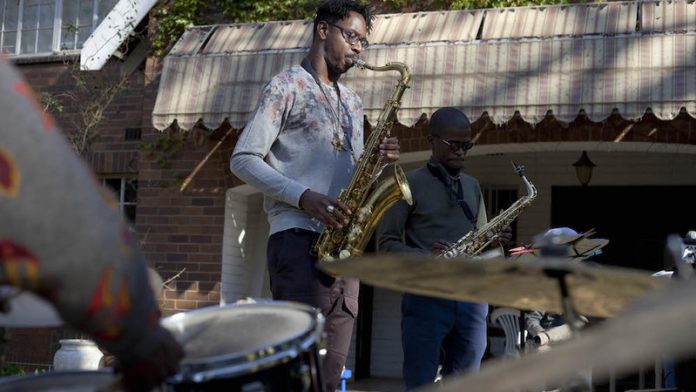 – Lyrics from Mzwandile from Wisdom of Elders

The backstory to the creation of an artwork can profoundly influence its reading. Shabaka and the Ancestors’ Mzwandile, off their album Wisdom of Elders, is a case in point.

The opening song of the album, and the first song of the group’s second set on their launch date at The Orbit, is an insistent, incantatory praise song which I had assumed to be a tribute to the sterling work of Mzwandile Buthelezi.

Buthelezi has almost singlehandedly carved the visual accompaniment of this generation’s reinvigorating body of work by contributing to cover art or design to the albums of Benjamin Jephta, Thandi Ntuli, Amandla Freedom Ensemble and Shabaka and The Ancestors.

It’s an easy assumption to make but the artwork itself, and singer Siyabonga Mthembu’s lyrics, suggests a lot more is going on. Mthembu, vocalist for the group The Brother Moves On, and a member of the Ancestors, sings of a progenitor who strengthened his home through hardships.

In Buthelezi’s artwork, a universal, triple-breasted figure imparts vibrational information to an earthling and the figures are connected by a branch. Yet the singer’s announcement on Friday complicates the narrative further: as Mthembu proclaimed after a rendition of the song, Mzwandile is also the name the UK-raised tenor saxophonist Shabaka Hutchings was given by legendary Blue Notes drummer Louis Moholo-Moholo. Literally translated, it means the house has expanded.

Hutchings has played with Moholo-Moholo in both the UK and South Africa. He first visited South Africa in 2008 to participate in a Pan African Space Station show alongside Ayetoro. On subsequent returns, he plugged into Mandla Mlangeni’s Tune Recreation Committee (TRC), an open and experimental platform which has seen the likes of Moholo-Moholo helm the drum kit for some performances.

But before all of this, there is his actual ancestor —  a great grandfather who fought for the British army in World War I. He was stranded in Cape Town for a month after his squad had left him. Hutchings says that it was upon hearing this story that he first started to think about what being in southern Africa might be like.

Of his first trip, Hutchings says he realised that there was stuff happening which he had not thought of before. “What you get in terms of jazz and the music scene in England, especially at that time, was that there were older musicians doing South African jazz,” he says during a pre-launch rehearsal in Melrose, Johannesburg.

He added: “You don’t get a sense that the music actually keeps progressing. There are guys that are innovating, that keep it on the tradition and all the in-betweens. People doing electronic music and all the different crossovers.”

Around 2012, he began frequenting the country, where he saw the experiments happening at Cape Town jazz venue Tagores, and met trumpeter Mandla Mlangeni and the TRC. “I didn’t know there was stuff like that — where it was composed material but this loose, innovative way of approaching it. With the guys I was playing with it was either you play really tight, composed tunes, or you play loose, no tunes at all. There wasn’t this kind of combination.”

“From learning about the South African lineage I can see exactly where that has come from. The music of the Blue Notes, Chris McGregor stuff, Barney Rachabane and the big band history that they have had there.”

Wisdom of Elders is the culmination of jamming and recording with groups led by either Mthembu, drummer Tumi Mogorosi, trumpeter Mandla Mlangeni or pianist Nduduzo Makhathini.

But more than just a South African moment driven by “the quest to inhabit one’s own voice”, as Mogorosi says, the advances in South African jazz and the coming together of The Ancestors speaks to a global movement alluded to by the sentiment of Los Angeles-based tenor saxophonist Kamasi Washington’s Change Of The Guard.

In a live performance of his towering album, The Epic, Washington recounts a story of a guard dreaming about an upcoming generation to take his place. Four upstarts rise up to challenge him, with the last one being so supremely gifted that the guard voluntarily allows him to take his life. The guard wakes up to the fact that he is was actually dreaming and only watching the young boys in training. When a subsequent dream flashes 10 years forward and the youngsters again make the trek to challenge him, they find that the gate has been destroyed and the guard has already left, leaving them dejected as their entire life goal was to usurp him.

That the limits of jazz have been pushed to brink by a generation not afraid of being “wrong,” as Mogorosi says, is palpable from the malleability of Christian Scott’s stretch music, the relentless operatic sketching of Mogorosi and the distinctive rhythmic travels of Hutchings.

For Mogogrosi, there is the abiding tendency of not wanting to overemphasise the importance of this moment, realising that it came from the sacrificial toils of a generation before. “The only thing that has changed is the attitude, but the music and the conditions stay the same,” says Mogorosi in reference to a conversation he had with pianist Andile Yenana.

“Even though we went independent, we are still facing the same determinant conditions that negate certain notions of freedom that we might cling to as artists. We are brave in the sense that there is already a foundation for us to be brave, but we still face the same conditions of people coming to enjoy the music when the artists themselves are not enjoying life.”

Mogorosi prefers to call this the age of experimentation. The brilliance of Wisdom of Elders is how it encapsulates the zeitgeist from which it emerges.

In Mthembu’s subject matter and lyricism there is a focus on the idea of paying homage. This is carried over into tunes without vocals. Give Thanks, the freest tune on the album, is an amplified showcase of Mogorosi’s non-linear approach to drumming, presented on the album in conversation with the “relentless” (as Hutchings calls it) percussion of Gontse Makhene.

Give Thanks, I am willing to venture, is an ode to the pioneering spirit of the Blue Notes or Louis Moholo-Moholo, the generous, last surviving member of the group.

Hutchings confessed to being enamoured with the interplay between Ariel Zamonsky’s sturdy basslines and Mogorosi’s almost tidal approach which creates, in the mind of the listeners an imagined groove.

Makhathini’s tasteful infusions of colour on the Rhodes throughout make this album a meditative affair, while the distinct playing styles of Mlangeni, alto saxophonist Mthunzi Mvubu and Hutchings make this an exercise in egalitarianism, in essence, a brotherhood of breath.

Wisdom of Elders is available from Brownswood Recordings.

Who was Bra Hugh

Kamasi heeds the call of an epic time

Zoë Modiga and the sacred art of Yellow