SADC puts the focus on Swaziland, an anachronism in an ostensibly democratic region 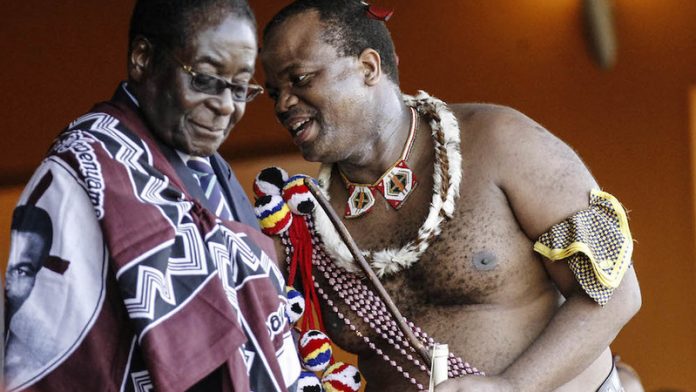 The chair of this week’s annual Southern African Development Community (SADC) summit of heads of state and government is being transferred from the region’s leading democracy to the last absolute monarchy on the continent.

The headquarters of SADC are in Gaborone, and Khama was outspoken about undemocratic practices among his peers, most notably the repeated controversial re-election of his long-serving eastern neighbor, Robert Mugabe, from whom he took over.

In an unprecedented move, Khama unexpectedly withdrew his country from regional election monitoring duties, which were regarded as a waste of resources because their reports and recommendations were repeatedly ignored by political systems propping up dictatorships.

The summit’s theme is Resource Mobilisation for Investment in Sustainable Energy Infrastructure for an Inclusive SADC Industrialisation for Prosperity.

Everything is being done to ensure the summit is a “resounding success”. The road to the new airport at Sikhuphe, 80km from the Swazi capital, Mbabane, and named after the king, is being made a dual carriageway and is lined with billboards advertising the event and welcoming guests.

The airport project is regarded by many as another sign of extravagance amid extreme poverty, because of the king’s acquisition of a bigger plane that was too large for the smaller Matsapha airport in Manzini.

More than two-thirds of Swazis live under the poverty datum line, and civil servants are threatening to march at the SADC summit to protest against poor salaries.

Mswati, unlike the rest of his peers, who were elected, giving a semblance of democratic practice in line with SADC treaties and protocols governing democratic elections, inherited the throne in 1986, making him the third-longest-serving head of state in Southern Africa after Angola’s Eduardo dos Santos (since 1979) and Mugabe (since 1980).

In matters of governance, Swaziland has a unique and controversial nonparty system, known as tinkhundla, in which leaders are appointed by traditional regional councils on the basis of “individual merit”. Political parties are not recognised, and power and authority reside in the Swazi traditional customs, whose chief custodian is Mswati.

The main opposition leader and proponent of democracy in Swaziland, Mario Masuku of the People’s United Democratic Movement (Pudemo), is out on bail. He is charged with terrorism, subversion and sedition for addressing a May Day rally in 2014 at which he called for democratic reforms in the country.

Based on the country reports from delegates at the civil society forum and the People’s Summit events organised by the citizens of SADC, the Swazi leader is taking over the reins at a time when the region is experiencing many socioeconomic and political challenges. Besides the effects of the ongoing drought, which has affected agricultural production so badly that the region has become a net importer of food, it also faces peace and security issues in at least five other countries.

The situation is volatile in the Democratic Republic of Congo (DRC), where the incumbent, Joseph Kabila, copying most of his peers in the Great Lakes region, seems keen to extend his rule unconstitutionally beyond the mandated second and final term ending on November 27. The country’s chronicle of violence is littered with deaths, broken limbs, raped and sexually violated women, and tensions are already simmering, especially in the eastern region, which has not known real peace, despite hosting the United Nations’ largest peacekeeping mission in history.

Another of Mswati’s headache will be Lesotho, a tiny kingdom with a mountain of problems. Already on the agenda for this summit, the security situation hasn’t stabilised since a coup attempt in April 2014 and the brutal murder of army chief Maaparankoe Mahao by members of the Lesotho Defence Forces in June 2015, prompting SADC to intervene for the umpteenth time. Recently, a newspaper editor was shot and critically injured in unexplained circumstances, and most leaders of the opposition political parties have fled to safety in South Africa.

Zimbabwe is back in the limelight for the wrong reasons – police brutality in the face of resurgent civil unrest amid economic meltdown. Ignited by the growing social movement under #ThisFlag, the situation is likely to get worse as Mugabe will be preparing for elections in 2018 in the face of disharmony, even in his own party Zanu-PF party.

Mozambique faces turmoil, with strong fears of a resurgence of the devastating 15-year civil war. Already, 48 schools have been closed in the central and northern regions and thousands of refugees have fled to Malawi and Zimbabwe. The economic revival of the country through its gas and coal deposits risks becoming another African resource curse if calm is not restored soon.

National security in Madagascar is still work in progress since SADC mediation after a 2009 coup d’état. Although the country is back on the path to democracy after credible elections in late 2013, more needs to be done to deal with the root causes of the conflict.

The summit will coincide with the Umhlanga festival, the reed dance at which tens of thousands of unmarried, bare-breasted girls parade at the royal village and at which Mswati is allowed to choose another wife (he already has 13).

One hopes this will not distract regional leaders from dealing with the critical challenges at hand, especially in one of the most patriarchal countries in the world and in which women’s rights are not considered or protected at all.