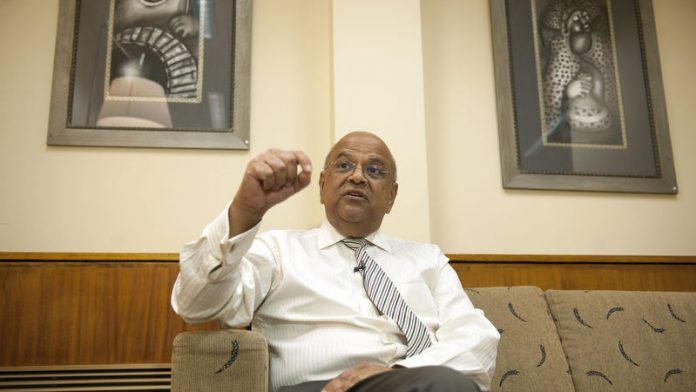 South Africa’s elite police unit, the Directorate for Priority Crime Investigation also know as the Hawks, this week summoned the country’s Finance Minister Pravin Gordhan to appear at its offices to receive a warning statement. The minister is reportedly the prime target of a Hawks investigation into an alleged rogue South African Revenue Service intelligence-gathering unit. Gordhan refused. Most observers see this as part of a plot to oust Gordhan as the country’s finance minster and that the Hawks are acting at the behest of President Jacob Zuma. The Conversation Africa’s Charles Leonard asked Raymond Suttner to make sense of it all.

What is behind this battle between the Hawks and Pravin Gordhan?

As I see it, the Hawks are acting on behalf of President Zuma in the guise of law enforcement. According to legal experts, there does not seem to be any basis for criminal charges against Gordhan and the other former South African Revenue Service employees. This should be seen in the context of the various attempts by Zuma to prevent the National Treasury from regulating state owned entities, notably South African Airways; but also others where there appear to be irregularities and where Gordhan has sought to have new board members appointed, and in the case of the airline a new chairperson.

It may sound crude, but it does appear that Gordhan and the National Treasury more generally stand as a barrier preventing wholesale looting of state resources. For some time, maybe the entire period since 1994 (when South Africa became a democracy), the Treasury has maintained a level of professional autonomy and insulation from some of the divisions that have run through other state departments. It has been known to get a job done on a basis that conforms to what is required according to applicable regulations. That standard ought to be observed by all ministries and departments, but that’s not the case.

There is an ideological element in that Gordhan is trying to run the economy in a manner that attracts investors, conforms to investors’ expectations and that will stabilise the economy. That has a downside, which does not concern Zuma or the Hawks, in that the investors are not necessarily friendly to the poor. Stability for the investors means “market friendly”.

But at this moment whether we are sympathetic to the poor or not, there is a need for macroeconomic stability and what is happening threatens that. What appears to be intended – to remove Gordhan or undermine the Treasury – threatens that.

But it is not ideological in the sense that it is an attempt to cream off state resources in ways that may be both irregular and illegal. The Hawks are thus acting in a manner that has little to do with legality and everything to do with furthering the president and his allies’ goals – to accumulate personal wealth, at the expense of state resources and the taxpayers.

Can anyone else bring sense and salvage this situation?

There is a mystique that has been created by the media and sections of business around the powers and capacity of Deputy President Cyril Ramaphosa.

I think we should be cautious about attributing messianic qualities to any individual. Certainly Ramaphosa may not be corrupt and may be able to exist as a leader without the need to cream off state resources. But is there any possibility of his becoming leader? What is his support base outside the media and business? Also, whoever becomes leader enters a situation where she or he is now expected to service patronage relationships.

In my view, something more than a change of leader is required to change the patronage-based character of ANC politics.

This looks like a battle to the end with no consideration for the consequences. Is that a fair assessment?

What appears to emerge from the firing of former Finance Minister Nhlanhla Nene in December 2015 and the current situation is that Zuma does not care much about what happens to the economy, or with rating agencies. He seems at once very hands off and simultaneously a very focused man. He is slow to make decisions but he is single minded in some respects. He is concerned about himself and his own well-being, whatever price the taxpayers and the country and its laws have to pay. No price is too great for others to pay to meet his avarice.

It is by no means clear that his appetite has been satisfied and he may well be trying to take as much as he can before he leaves office. At the same time he wants to have a successor who can be relied on to do what is necessary to avert a prosecution. Ramaphosa does not appear to be trusted to ensure that.

Who will be the biggest winners and losers?

As I see it in the short run the country will lose and stands the chance of going down the drain economically. But we are not powerless. It is very important that interested parties – and we are all interested parties – should exert what influence they can to thwart these plans. Business, notably the banks, played a role in securing the removal of Des van Rooyen as Finance Minister and the return of Gordhan.

I think the future of this country as a democracy and stable economy can be retrieved if South Africans find ways of building unity around agreed values. Under apartheid, legality connoted denial of rights. Under the present order we have a rights-based constitution. It defends the rights of all.

That is why it is important that South Africans defend the country’s laws and constitution. That is what is in the interests of the richest of the rich and the poorest of the poor. Neither benefits from the lawlessness and looting.

There needs to be a way of combining their strengths, and finding ways of building unity in broad organisations, not simply NGOs and other interest groups. South Africa needs to have people out there as members of an organised force defending and building on what it gained in 1994.