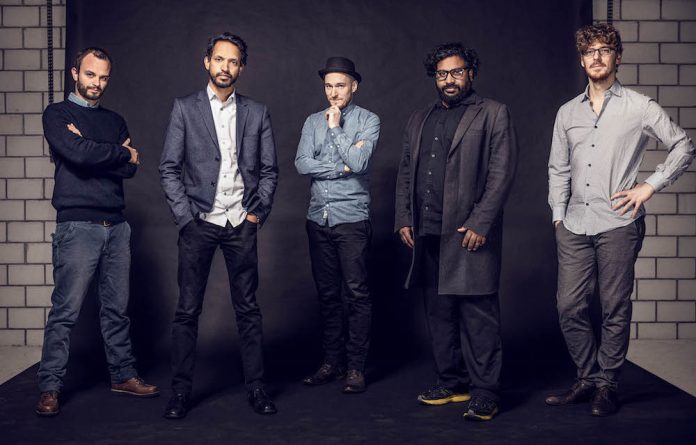 A skyjack is a crane-like aerial lifter used to elevate or lower people. “That has no connection to our band name though; there’s no deeper meaning. We just liked the sound of it,” award-winning bassist Shane Cooper says with a smile.

The name of the band Skyjack may be arbitrary but the collaboration between this powerful group of five jazz musicians is not. Some of the country’s best musos are joined by two Swiss performers on an upcoming national tour to launch their debut album. The band consists of Kyle Shepherd on piano, Kesivan Naidoo on drums, Andreas Tschopp on trombone, Marc Stucki on tenor sax and Cooper on double bass.

The tour is a 10-day adventure around the country to launch the album and is made possible by the support of Concerts SA and Pro Helvetia, the Swiss council that pro- motes that country’s art and culture. The first gig kicks off on September 7 in Durban and the band will visit Johannesburg, Cape Town, East London, Knysna and Port Elizabeth.

Skyjack formed as a result of connections made over the past few years and a deep musical chemistry, which brings them together when possible. In 2012, Cooper and Naidoo went to Switzerland to perform at the JazzWerkstatt festival. They were invited to perform with Stucki, and Tschopp was also included.

Cooper connected with the Swiss musos again in 2013, the same year in which he was awarded the Standard Bank Young Artist Award for Jazz, when he was preparing to perform at the National Arts Festival in Grahamstown.

“There was a real natural chemistry when we all played together for the first time and that’s why I really wanted to play with Andreas and Marc in Grahamstown,” he says “We ended up being a quintet for the whole show, because the formation between us was so strong,”

The band toured South Africa in 2013 and performed twice in Switzerland in 2015, winning the prestigious BeJazz TransNational competition, which brought them back to perform at the BeJazz Winter Festival earlier this year in Berne.

Regarding the decision to form the band, Cooper says: “We just realised it was a really fun project for all of us to be a part of and [we] shared a good connection whenever we could meet up to play. Because of the distance, we only get to meet once a year, if we’re lucky, so there’s a fun reunion feeling every time we get together.”

The self-titled album is a wide exploration of sounds, with compositions from all five members of the band. It was recorded last year at the Powerplay Studios Maur in Switzerland.

Despite the band members being on different continents and with widely diverse backgrounds, the album has achieved a complete fluidity with a modern jazz aesthetic. The opening track Tafattala is an Ethio-jazz-inspired composition by Cooper, and Anonymous in New York has the distinct signature of Shepherd’s piano. Naidoo’s Freedom Dance, which was originally featured on his album, Kesivan and The Lights, also gets a reworking.

Cooper currently balances his life between performing as a jazz musician and as the electronic music producer Card on Spokes, for which he is about to launch his latest EP.

Naidoo had returned to South Africa briefly after a year at the Berklee College of Music in Boston where he is completing his masters. This will be the first opportunity for audiences to see him perform on home soil since his return.

Shepherd is one of the most successful independent local jazz musicians and is currently completing his masters in music at the University of Stellenbosch.

Some might remember Tschopp from this year’s National Arts Festival, where he performed with Carlo Mombelli. The trombonist is currently on a three-month residency in South Africa until the end of September. He has collaborated with many local musicians, including bassist Herbie Tsoaeli.

Stucki is a well-known figure on the Swiss jazz scene. He runs a small concert venue in Berne, the Sonarraum U64, and is a cofounder of the festival Jazzwerkstatt Berne.

Talking about the creative process, Cooper says: “We enjoy the process of selecting songs that make sense to the sound of this band, [songs] that everyone writes individually with their own style. We then compile set lists based on what will work best within the dynamic of the group.

“It’s quite fun and one of the only bands I play in that has equal contribution [from its participating members] creatively. It just made sense for us to record an album of where we were at with the music at the time, and then share that with people.”