Angela Davis: Nina Simone’s music was so much more than the soundtrack to a movement 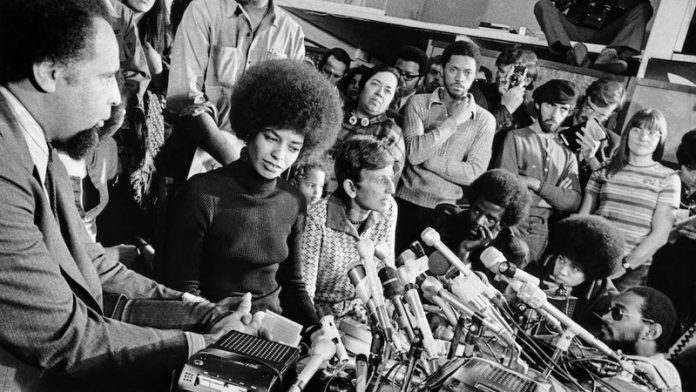 Former political prisoner; black feminist activist and theorist, writer and teacher Angela Davis will deliver the 2016 Annual Steve Biko Memorial Lecture at Unisa on Friday 9 September. To commemorate the inimitable cultural icon’s lecture, the M&G is honoured to have acquired the rights to publish one of Davis’ most recent essays, written as the liner notes to the new album Nina Revisited: A Tribute to Nina Simone.

I first heard Nina Simone’s music as a high school student in the late 1950s in New York. Although her name did not yet by itself evoke black freedom, as when she later sang All I want is equality/ For my sister, my brother, and me, I do not think that I was alone in feeling that something in her phenomenal voice beckoned us toward the battle to come. As we moved into the 1960’s and an increasing number of people identified with the call to bring down segregation in the South, Nina Simone’s music helped us to navigate the contradictions that propelled the black struggle forward.

It was from Nina Simone that we learned, for example, how not to interpret the tactical importance of nonviolence as mitigation of our collective anger against racism. Thus, Mississippi Goddamn became as important an anthem of the Civil Rights Movement as We Shall Overcome.

For those of us who were fortunate to follow her from the earliest stages of her career, the music she forged with her haunting voice and her multi-genre instrumental forays helped to guide us through the complex turns of the black freedom movement. In this sense, her music was always more than a soundtrack of the movement. It was much more foreground than background. It was not mere accompaniment. It announced, asserted and innovatively played the changes of the movement.

As a young activist, one of my favorite songs was her cover of Lotte Lenya’s Pirate Jenny from Berthold Brecht’s and Kurt Weil’s Threepenny Opera. I do not think I fully understood then why it spoke to me so powerfully – although the intensity of her recorded performance is by itself a sufficient explanation. Later I came to realise that while virtually all of the dominant voices of resistance were male, here was a black woman musician redefining the content of this song to depict the collective rage of black women domestic workers.

Nina Simone compelled us to think about those primary agents of change, relegated to invisibility but without whom the Montgomery Bus Boycott would not have been able to launch the 20th century freedom movement. In this sense, she helped to introduce gender into our ways of imagining radical change long before it became a permanent category in our political vocabulary.

In 1968, as a member of the newly formed Los Angeles SNCC, I was one of the organisers of a massive birthday celebration at the LA Sports Arena for the imprisoned Huey P. Newton. During this Free Huey extravaganza, a merger (short-lived as it would turn out to be) was announced between the Black Panther Party and the Student Non-Violent Coordinating Committee. Speakers ranged from H. Rap Brown (Jamil Abdullah Al-Amin), Stokely Carmichael (Kwame Touré) and James Foreman to Bobby Seale, Corky Gonzalez, and Reies Tijerina.

As I recall, not a single woman was invited to speak. However, Nina Simone was asked to perform. While I felt deeply privileged to be present at that event, at which so many of the movement’s major players were present, it was Nina Simone’s voice that bestowed on that gathering an aura of historical transcendence. In representing all of the women who had been silenced, in sharing her incomparable artistic genius, she was the embodiment of the revolutionary democracy we had not yet learned how to imagine. At that moment we were no longer powerless individuals but rather a formidable collective force that was moving irreversibly in the direction of radical change.

For almost as long as I can remember, Nina Simone’s music has guided us, strengthened us, and bolstered the creation of communities of resistance. While many artists have enthusiastically supported the quest for social justice, few have been so relentless in their efforts to dedicate their careers to the goal of collective political transformation.

I followed Nina Simone as she made the transition from movements demanding the acknowledgement of our rights as citizens to insurgent movements calling for the economic and political restructuring of our society. With her, I moved from an assimilationist project to a revolutionary project. I also learned from Nina Simone that our capacity to embrace large causes is only valuable to the extent that we are able to apprehend and embrace equality and justice on more intimate levels as well. I thus found guidance not only in Mississippi Goddamn, Pirate Jenny, Old Jim Crow, Four Women, Young Gifted and Black, and I Wish I Knew How It Would Feel to Be Free, but also in I Put a Spell on You, I Want a Little Sugar in my Bowl, Don’t Let Me Be Misunderstood and Ne Me Quitte Pas.

In 1971 I was deeply moved when I was informed that Nina Simone wanted to visit me in jail. When she did not appear at the appointed time, I worried that the visit had been called off. But as it turns out, the occasion for the delay was the jail authorities’ refusal to allow her to bring into the secured area the gift she wanted to present to me.

When she finally appeared, she was holding a beautiful red helium-filled balloon. I learned that she had engaged in an extended verbal battle with the guards, whose evocation of the rules was no match for Nina Simone’s tenacity. Over the next period, as it gradually lost its buoyancy, this balloon remained one of the few permanent fixtures in my cell. Even when it was entirely deflated, I preserved it as a treasured artefact of my time with the amazing Nina Simone.

I now discover that this story of the balloon has acquired a second, more public life, in that it inspired the artwork for Nina Revisited: A Tribute to Nina Simone. The artists who pay tribute to her on this extraordinary album range from Ms. Lauryn Hill, Common, Lalah Hathaway and Mary J. Blige to Lisa Simone, Usher, Gregory Porter, Grace, and Alice Smith. Jazmine Sullivan sings Baltimore, the song that powerfully accentuates the contemporary reach of Nina Simone’s music. Hard Times in the city /In a hard town by the sea /Ain’t nowhere to run to/ There ain’t nothing here for free.

As this album is released, the case of Freddie Gray, the young black man who died in the custody of the Baltimore Police Department, has emerged as the most recent symbol of racist state violence, against which young activists are passionately mobilising under the slogan “Black Lives Matter”.

Just as Nina Simone’s music inspired and guided those of us who struggled to defeat previous manifestations of racism, today it bridges the collective imagination of fifty years ago and the spectacular, awakening consciousness of a younger generation today. It is fitting that the last track on the album is Nina herself: I Wish I Knew How It Would Feel to be Free.