Is the SA Reserve Bank in danger of falling victim to state capture? 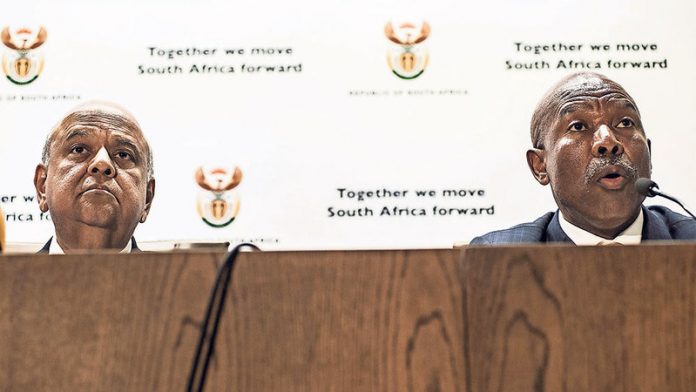 With the continued harassment of South Africa’s Finance Minister Pravin Gordhan, it has become patently clear that no institution will be spared in the wave of state capture that is sweeping through the country.

The finance ministry has been at the centre of this wave for nearly a year. The latest move against Gordhan comes against a backdrop of efforts to wrest control of this particular portfolio. The most spectacular was President Jacob Zuma’s decision in December 2015 to fire then Finance Minister Nhlanhla Nene and replace him with someone more agreeable to his plans.

That plan backfired. President Zuma had no option but to reappoint Gordhan, the previous Minister of Finance. But Gordhan is now back in the firing line after refusing to give ground to Zuma on some crucial issues. Rumours persist that the finance minister is about to be fired or charged – possibly even arrested – by the elite police unit, the Hawks.

Is the Governor of the SA Reserve Bank next? This consideration comes on the back of political attacks directed at the country’s central bank by senior members of the governing African National Congress (ANC) aligned with Zuma.

The Deputy Secretary General of the ANC Jessie Duarte has raised questions about the central bank’s role. She is suggesting that the bank serves partisan interests because it has private shareholders.

It has also emerged that Mosebenzi Zwane, the Minister of Mineral Resources, tabled a working paper to the Cabinet recommending that the power to issue banking licences should be taken away from the SA Reserve Bank and given to the minister of finance.

But can the Governor be removed as easily as a minister of finance? My reading of the SA Reserve Bank Act is that the answer is no. The current legislation makes no provision for the President to dismiss the central bank governor.

Holding central bankers to account
Central banks’ governors need security of tenure once appointed. Security of tenure allows them the opportunity to conduct monetary policy in the interests of the whole country without fear of dismissal.

Imagine a scenario in which a central bank governor was dismissed every time he or she took a monetary policy decision that the government disliked – for example by raising interest rates. This would render the job unworkable.

Because of this, the appointment of central bank governors has been designed to ensure that they can get on with their mandate without political interference.

The Governor of the SA Reserve Bank is appointed by the President of the Republic after consultation with the Minister of Finance and the Board of the South African Reserve Bank. Appointments are for an initial five years. Once the first term is served, the President can reappoint the Governor for an unlimited number of further terms, each of a maximum period of five years.

So much for the appointment. What about getting rid of a governor?

The SA Reserve Bank Act lists conduct that will render the Governor unsuitable to complete any term of appointment. Other than on these grounds, no provision is made for the dismissal of the Governor.

So how would a governor would be removed if he or she was considered to unsuitable for office? This is open to some debate, but it seems that there might be at least two possibilities:

My understanding is therefore that the President cannot simply remove the Governor of the SA Reserve Bank. It would require – at a minimum – legal action or a parliamentary process.

Central banks with shareholders
Duarte’s main point of contention is that South Africa’s central bank has private shareholders which means that it cannot act independently. This is not true.

South Africa isn’t the only country with a central bank owned by private shareholders. While most central banks in the world are publicly owned, there are a handful that aren’t. These include Belgium, Greece, Japan, Switzerland and Turkey. In the case of the US and Italy, only shareholding by commercial banks is allowed.

In none of these instances is there evidence that private ownership affects the institutions’ independence. In fact, it can be argued that a private ownership structure adds to the transparency and accountability of central banks. For example, the SA Reserve Bank publishes a comprehensive annual report for distribution to shareholders. In addition it has to hold an annual ordinary general meeting of shareholders at which the Governor responds to questions about the business of the central bank and the conduct of monetary policy.

The link that Duarte tries to make between the central bank’s shareholding and its approach to exchange rate policy simply does not exist. The SA Reserve Bank made this point clearly in a statement it issued shortly after Duarte’s salvo. This points out that shareholders play no role in the formulation and implementation of monetary policy.

On its approach to exchange rate policy, South Africa’s central bank takes a stance similar to most central banks in the world: namely, that any attempt to influence the value of a currency by intervening in the market is futile. China is an exception to this rule. It has a controlled economy and has substantial foreign currency reserves with which to support the yuan in the open market.

The SA Reserve Bank serves the best interests of all South Africans. The Governer’s security of tenure supports the efforts of the central bank to contain inflation. At the same time a structure of private shareholders in the central bank helps to improve monetary policy transparency.

Jannie Rossouw, Head of School of Economic & Business Sciences, University of the Witwatersrand