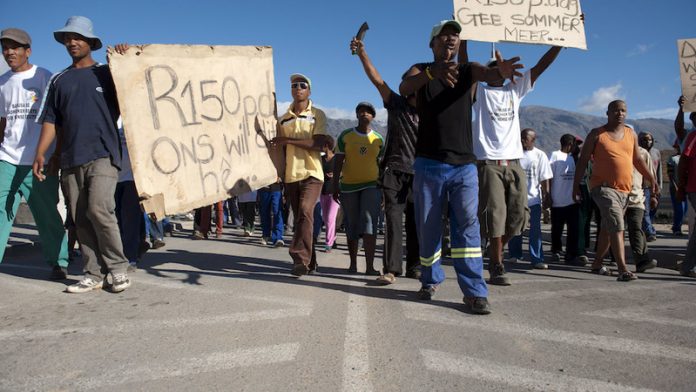 The value and relevance of a minimum wage for all workers is being debated following the recent appointment of the National Economic Development and Labour Council panel by Deputy President Cyril Ramaphosa.

Yet by far the majority of formal sector workers already receive a minimum wage.

The proposed national minimum wage range seems to be anywhere between about R2 000 and R5 500 a month. How this amount is determined and what it includes will be at the heart of the debate for some time to come, with trade unions on one side demanding a higher minimum wage and industry arguing for no minimum wage or one that is at the lower end of the scale.

If one follows the practice of making the minimum wage a percentage of the median wage then it is likely to be less than R3 000 a month. The panel, made up of representatives from government‚ labour‚ business, is likely to agree on an amount of R2 200 to R2 800.

Minimum wages cover the majority of workers – about 80% of the formal sector – and, by last count, there were at least 420 industry-prescribed minimum wages in different sectors and subsectors of the economy.

Using the average wages of the formal non-farm sector, we can see who does well and who could be affected by the minimum wage. The average non-farm formal wages averaged R18 668 a month for the year to March 2016. By my calculations, that is 7.6% up on the previous year.

Although the minimum wage is often different within a sector, an analysis of the average wage in the non-farm economy shows the top 20 paying sectors fare well when compared to the average and the bottom 20 struggle by comparison.

Average formal sector wages vary widely. According to the quarterly employment survey of data from firms in the formal sector, the average monthly wage – including overtime and bonuses – was R18 668.

This formal salary average is at least six times higher than the estimated minimum wage is likely to be. It excludes the directors, including the finance director, of the companies in the sector and so would include the general worker but also the foreman and the human resource manager.

Using this data source, the 20 subsectors with the highest-paid employees were, in general, technical sectors with many highly skilled staff. In the non-financial sector, the refinery industry has the highest average monthly salary followed by air transport.

The data in Table 1 (below) shows that of the industries that are not reliant on university graduates and that are employers of semiskilled workers, the petroleum refineries and automotive manufacturers pay the best. In this assumption, one has to remove monopolies such as Eskom.

Seven of the above industries would have a high percentage of graduates and technical staff. For example, the legal and accounting sector would probably employ people with degrees or diplomas for more than 70% of their staff requirement.

Three are monopolies and would not worry as much about staff costs because they can get away with increases to the economy in general. Real estate is based on commission and risk-taking, and one is the national government, which is known worldwide to have one of the biggest payrolls as a percentage of gross domestic product.

There are only six manufacturing sectors in Table 1 that generally train and equip their own staff and form part of the best-paid non-financial economy. Certainly, of the employers with a large percentage of semiskilled employees, the auto and petroleum industries pay their staff particularly well. They are the best place to apply for work for someone who has just completed their matric. These industries also often offer training and a way into the more skilled positions, particularly for those who do not complete degrees and the like.

For example, the auto manufacturers pay an average wage that is 50% higher than the formal sector average and also provides non-financial benefits such as a career path and sometimes other benefits such as free medicine.

In all the top sectors, the minimum wage will have no effect, and of course in many other industries too. The workers in these will pay for the minimum wage if it triggers an inflation increase.

But all is not a garden of roses.

The industries that may be in trouble when it comes to the minimum wage are the agriculture sector and the pool of domestic workers, although some manufacturing sectors may also be forced to increase their average minimum wage.

Table 2 (below) shows the 20 lowest-paid formal subsector categories that pay the lowest averages.

All 20 lowest average wages in the formal sector are in manufacturing. These sectors are struggling with growth and imports. Although their average wages are far above the proposed minimum, the problem is their minimum wages are far more likely to be low. And, as with most other manufacturing subsectors, they are employers of unskilled and semiskilled workers.

These sectors employ an estimated 488 000 people, with about 25% to 30% of their employees close to the sector’s minimum wage.

These industries will be the first to feel the pressure of a prescribed increase in their minimum wages. The five lowest paying sectors are probably in trouble if the minimum wage crosses R2 800 a month. At R4 000 a month, the bottom 10 would have to either shift to importing or mechanisation, and that is where the problem will lie.

Agriculture, taxi and domestic workers will also be in serious trouble and so too will be some personal service industries that are interwoven in the other subsectors.

A minimum wage of R2 800 a month will put close to 15% of the workforce – or about two million people – in a range where some will get a wage increase.

Not all two million will get the increase and not all will lose their jobs, given that some earn more than the minimum wage. Some hours will be shortened, or some industries can adjust a little. But it does mean that further job creation and the use of semiskilled adults will dry up further.

Mike Schüssler is director of economists.co.za