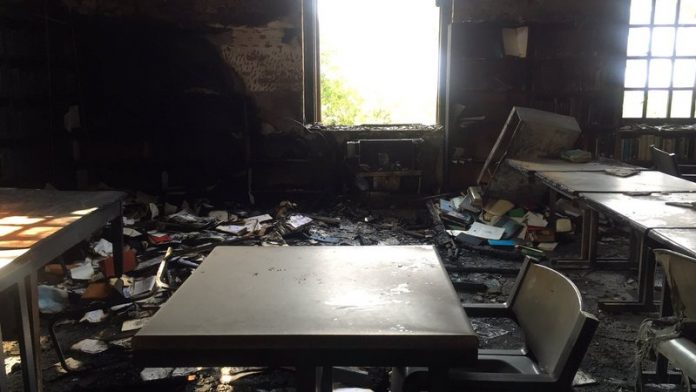 The University of KwaZulu-Natal’s student representative council (SRC) has condemned the burning of the law library at Howard College on Tuesday evening.

“I want to categorically state that we as the SRC are against any form of burning. That infrastructure is used by us and benefits us. If you burn an institution of higher learning you are disadvantaging a black child especially. They are the people who need it the most,” SRC president Bandile Majola told News24 on Wednesday.

According to Majola, there were many “general issues” that students wanted addressed urgently.

“These are issues the university has been well aware of for a long time. They have failed to act on them. Negotiations are a tactic they use to get students to quieten down. They don’t implement agreed upon resolutions.”

Majola questioned why the university had enlisted the services of a private security company when the institution had security staff, adding that he suspected some sort of corruption in the matter.

“Private security Isidingo Security has had their personnel roaming around our campus when we have insourced security. Why?”

Curriculum, NSFAS, fee increases
He said another of the students’ grievances was an unchanging curriculum for first year courses. Majola said students paid more for tuition every year but they were not always offered courses that were current.

“Nothing has changed. We don’t exactly know what we are paying for.”

Listing another grievance, Majola said students are now required to submit applications for government funding directly to NSFAS and not through the university. Majola said handling the application process this way had proven unsuccessful at other universities.

“We have seen this direct application process fail at DUT [Durban University of Technology]. We want government or the university to come up with a pilot project at least before just changing things overnight.”

Majola said the SRC was also fighting to ensure there was no fee increase in 2017.

No word from management
He further claimed that police and security dealing with protesting students were using strong-arm tactics.

“They have assaulted and shot at students. The sad part is that media itself is not honest. When security and police are terrorising students there is no reporting. But when a building burns down they are there and publishing that.”

According to Majola, students also wanted residences built at the university, a resolution he said the university agreed to in 2011.

“We have been asking for residences for I don’t know how long. On the website we are sold this dream of quality residence, but that is far from true.”

Majola said he was yet to be contacted by management on any of the issues since protests began.

“By doing this, they are saying the grievances of students mean nothing. We are clients of the university and they are failing to provide for us. There is no university without us, but they are not assisting us. Management has not contacted me since this all began.”

He said the SRC was open to meeting with management but would only do so with a mediator present.

“We will insist on a mediator because in previous instances when we tried to resolve issues, management comes to the table with arrogance.”

University closed
Majola urged students to use the early September recess that management announced on Tuesday to catch up on their studies.

“We want students to remain in their residence and catch up on a lot of study time that we have lost.”

The university will be closed from September 7 to 19 with the academic programme resuming on September 20.

Thirteen students (not 16 as previously reported), aged between 17 and 20, were arrested for public violence, contravening a court order and causing damage to property at the UKZN Westville campus on Monday night. Police said six vehicles from the campus were burnt and one building set alight.

On Tuesday police dispersed a crowd of around 30 students who were chanting struggle songs at the UKZN Westville campus. Students reported being tear-gassed. A small fire in a bin had to be extinguished.

The university’s Howard College and Pietermaritzburg campuses also experienced violent student protests with groups of students being dispersed by police firing rubber bullets in some cases.