Free education would now have to take place under trees, says UKZN after arson 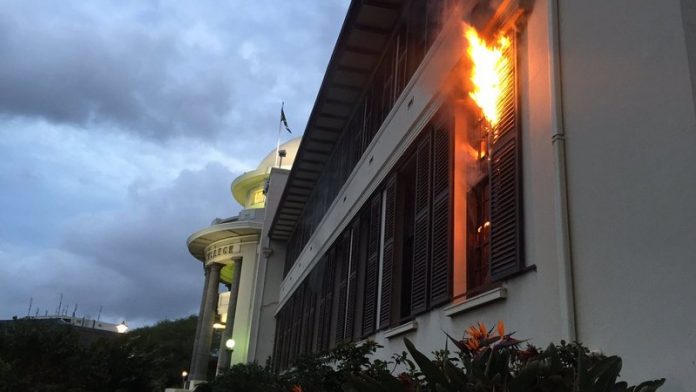 Amid mounting tensions over the announcement of next year’s fee hike, 51 students from the University of KwaZulu-Natal (UKZN) were arrested following a wave of violent protests.

Most of them have been held in connection with a spate of arson attacks that forced the embattled institution to close on Wednesday. It was scheduled to close on September 16 for the holidays.

Several buildings were torched on the university’s various campuses and the damage is estimated at millions of rands. These include an exam hall on the Pietermaritzburg campus, a coffee shop and part of the law library on the Howard campus in Durban, as well as the Senate building on the Westville campus. Six vehicles on the Westville campus were also burnt.

UKZN spokesperson Lesiba Seshoka confirmed that it has managed to obtain video footage of the incident involving the burning of a section of the law library. He said they were studying the footage in a bid to identify the perpetrators. “Books that were burnt were priceless and we will not be able to replace them.”

Wednesday’s protest at the UKZN Pietermaritzburg campus was triggered by an allegation from a student that she was raped and sexually assaulted by police on Tuesday morning during violent protests. The university, however, has distanced itself from the claim, saying the alleged sexual assault took place far away from the campus.

Seshoka said police were investigating and that “we cannot say anything about it except to say we are totally against this kind of thing”.

Commenting on the damage to university property, he said that if students who committed such “untold damage” wanted free education, “this free education would have to take place under the shade of trees”. “Where is the money for these destroyed buildings going to come from?”

The higher education director general, Gwebinkundla Qonde, also condemned the torching of university property, saying it was “a barbaric act”, as well as “anti-scholarly and is against everything we stand for as a democracy”.

Qonde said the government was finding out the cost of damage to property as a result of protests at universities across the country.

Meanwhile, Ahmed Bawa, chief executive of Universities South Africa – a body representing the country’s 26 vice-chancellors – said universities were worried about the outbreak of violence, especially at UKZN and the University of Zululand. The latter has been closed since the end of last month following protests over low staff salaries.

“Tensions are on the increase and we are very concerned. I think we just have to hope we get some closure on fees so that there’s some level of certainty about what the financial situation for next year is going to be like,” said Bawa.

Higher Education Minister Blade Nzimande is expected to make an announcement on next year’s university fee increases on September 15.

During the public hearings on fees by the presidential commission in Cape Town this week, University of Cape Town vice-chancellor Max Price said universities would support a no-fee higher education system if the country was rich and was already providing universal fee-free quality primary and secondary schooling, as well as access to early childhood development centres.

“For the foreseeable future … higher education should be funded by government grants and tuition fees,” said Price.

He said there were different ways to achieve equal access to universities if fees are a necessity, including free education for the very poor, midlevel fees for lower-income households and higher fees for the rich.