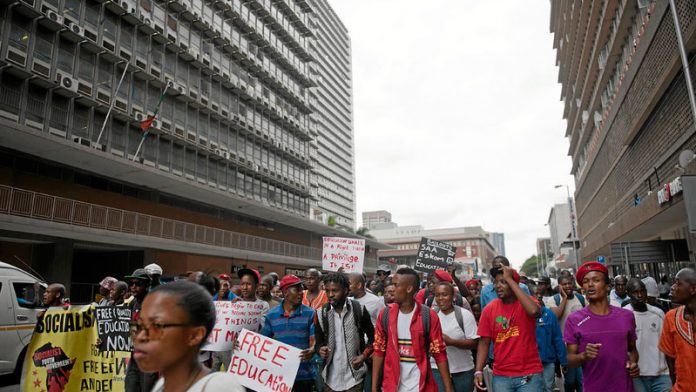 South Africa’s universities are once again in uproar. Higher Education and Training Minister Blade Nzimande has outlined how higher education should deal with fee increments for 2017. His announcement sparked anger and a great deal of confusion.

Neither smoke from police stun grenades, burning buildings nor officialdom’s smoke and mirrors will solve the problem.

We’re surprised that many didn’t anticipate the fallout from Nzimande’s statement. There are several reasons for students’ anger toward the state and university managements.

The most immediate is that Nzimande’s statement dealt with fee increments but sidestepped the fundamental issue: an ongoing call to make higher education free for all.

It is clear to us that very little will be resolved without reference to this critical demand. All the minister has done is to kick the can further down the road, deepening students’ disquiet and provoking conflict on campuses.

It is disingenuous to scold students for “protecting the rich” and “increasing inequality” through their demands for universal quality education. The state cannot merely exhort citizens to patiently await an increase in economic growth and its trickle downward, while blaming “selfish” students for taking resources allocated elsewhere.

There are revenue sources that can be examined carefully and accessed to fund free education for all, at all levels. This can happen while other social needs are simultaneously met. The most important of these sources is raising more tax from the super rich and stopping the illicit outflow of capital.

Confusion and omissions
Nzimande had insisted that a special presidential fees commission deal with the issue of free education. The commission, which began its work in January 2016, is widely viewed as sluggish and unfocused. Its completion date has been shifted and there have been complaints about its lack of transparency.

More importantly, the commission’s terms of reference are couched in the language of “feasibility”. Its mandate holds no clear and tangible commitment to exploring “fee free education”. In fact, how the commission’s mandate is understood is itself the subject of conflicting interpretations.

There were several other problems with Nzimande’s statement.

Some people interpreted Nzimande’s statement to mean that this group would be exempt from paying any fees. This is not true. They are merely exempt from the payment of any fee increases levied for 2017. They will continue to pay the same fees as they did in 2015 and 2016.

The approach he outlined for funding students appears to favour student loans from the financial sector. This amounts to a further entrenchment of debt-related financing and profiteering by banking and other financial institutions. Students are particularly disquieted by this element of the statement. They continue to be lent money – a far cry from any concept of free education.

In fact, higher education in South Africa is chronically underfunded – the main reason why universities constantly increase fees. The country spends far less on this sector than many other developing countries. South Africa’s state budget for universities as a percentage of GDP is 0.75%. The Africa-wide average is 0.78%; the proportion of GDP for Senegal and Ghana is 1.4% and Cuba 4.5%.

South Africa’s higher education budget for the 2015/16 financial year is R30-billion. If the government were to spend 1% of GDP on higher education, this would amount to R41 billion. That’s almost four times the reported shortfall caused by 2016’s freeze on fee increases.

The argument about competing national demands can only be used if there’s an honest, open engagement around how and what public choices are made in the utilisation of resources. This includes examining wasteful and vanity projects as well as exploring how much is lost to malfeasance.

More importantly, it’s time for South Africans to have a serious, open discussion about the potential sources of such resources.

The super rich can pay
We are academics and researchers working at a range of South African universities. In our submission to the fees commission, we made it clear that one potential source is the super rich.

As we argued, a determined state should examine the structure of personal taxation which could be levied for the country’s top 10% of income earners.

This income bracket, together with high net worth individuals – those who have an annual income of more than R7-million or R70-million in accumulated wealth – could generate a substantial increase in available public revenue to fund higher education.

Such an approach, which concentrates on the structural aspects of inequality and uses tax revenues for the purpose of higher education funding, is preferable to the idea of a differentiated approach to the “rich” and “poor”. It supports the idea that those identified with the top net worth pay for their children’s education through taxation, and the distribution of public funds, rather than through an individually-based “wealthy user pays” model.

This is a more democratic model of public interest and public funding than individual philanthropy or subsidy, which is not sustainable.

We are also opposed to the idea of a graduate tax. That too will have racially differential impacts on graduates from vastly different class, gendered and social backgrounds. Some graduates also have more accumulated family and other responsibilities than others, making such a tax an enormous burden.

Road map to free education
We urge the ministry of higher education and training to immediately set in motion a process which will show its determination to meet the promise of “free education for all”.

It should set out the concrete time frames for its achievements, its immediate and further milestones as well as the mechanism by which this process will be monitored, especially by students and their accepted representatives. Without such a road map to universal free education, there is little prospect that the present conflict will abate.

The ministry, in setting up this road map, must engage fully with as broad an array of students as is possible. It needs to work beyond the extant formal structures of representation which are likely to be ineffective for the purpose.

We would also like to urge university vice chancellors, working together with students, to call public assemblies for engaging with institutions’ most affected communities. This will elicit greater public understanding and democratic dialogue.