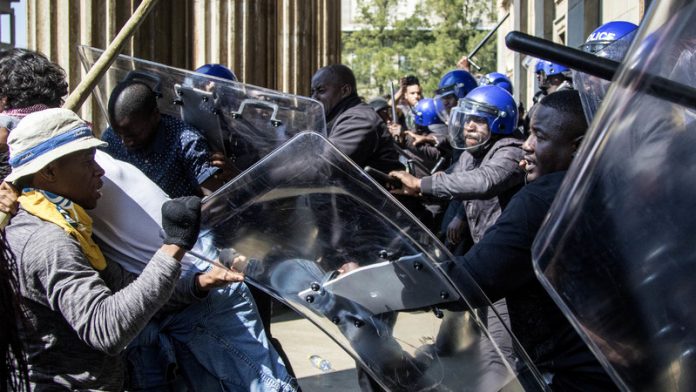 There’s no guarantee that university fee increases for 2017 would be capped at 8%, as recommended by the higher education minister, said the University Council Chairs Forum.

Protesters forced the shutdown of several campuses after Minister Blade Nzimande’s announcement, with some groups insisting that tertiary education must be made free immediately, and most rejecting the 8% increase as too high.

“We are hoping like hell that they are all going to try their best to keep it within 8% but we can’t guarantee that,” said Roy Marcus, the deputy chairperson of the forum, who met the chairpersons of the university councils on Wednesday.

Nzimande left undisturbed the autonomy of university councils to determine their own fee increases.

Marcus said there was consensus among most of the chairpersons at the meeting that they would support Nzimande’s recommendation. More than two-thirds of them attended the meeting.

“There was an appeal that all universities try their level best to operate within that constraint of 8%,” he said.

Meanwhile, universities are making contingency plans in the event of a prolonged shutdown. Academics and students have expressed fears that lengthy disruptions to classes could result in the final exams being postponed or even moved to early next year.

Staff and students at the University of Zululand fear that this academic year could be lost completely. Academics there went on strike in mid-August over low pay and most have not returned to work.

The university’s vice-chancellor, Xoliswa Mtose, had earlier warned that management would not hesitate to close the campus indefinitely if protests turned violent.

Meanwhile, Max Price, the vice-chancellor of the University of Cape Town, said one of the contingency measures they were looking at was how to make learning material available “so that students don’t completely lose the time when they are not in class”.

Price said they were considering all options, including introducing online exams, but added that it might be difficult to implement this because many students might not have access to computers.

“We are more likely to rely on other measures, for example, take-home exams. You can rely more heavily on a year mark or on tests. It’s too early to say but all options are being looked at.”

He said students had a realistic goal during last year’s #FeesMustFall campaign, which was the demand for a 0% fee increase.

“But what is the goal now, given that the government has agreed, in effect, to a 0% fee increase for the poor? If the goal is free education for everyone then that is not a goal that is going to be achieved between now and the end of the year.”

“Universities will make a plan for online education and for online lectures and exams to help many students through, but students who don’t have their own laptops and access to wi-fi will find that they aren’t able to take advantage of that. The consequences of a shutdown are very serious.”

He said between 60% to 70% of UCT students would be able to afford the 8% fee hike that Nzimande had recommended.

Marcus said the consequences of universities closing down was “far greater than just the disruption of the academic agenda”, adding: “The moment you start closing a university down, you have got to understand the impact it has on their international rankings. It further aggravates the situation. You’re now finding that visiting professors and researchers are extremely reluctant to come to South Africa because they are fearful for their own safety.”

Professor Ahmed Bawa, the chief executive of Universities South Africa, an association representing the country’s 26 universities, said there was a possibility of universities postponing exams to later this year, depending on the number of days lost.

“The bottom line is that universities will try as hard as they possibly can not to lose the academic year.”

He said: “The biggest progress is that for the first time the department of higher education has identified the ‘missing middle’ as a category of students to be assisted financially.”

He said a task team had been established to identify the number of students whose families earned more than R120 000 but less than R600 000 a year. This group — the ‘missing middle’ — would pay the same fees that were levied in 2015 but would be exempted from paying the 8% increase. This was expected to bring huge relief to students whose parents were nurses, teachers, police and social workers.

Lesiba Seshoka, the spokesperson for the University of KwaZulu-Natal, said its council would take a decision on next year’s fee increase on October 14.

He said recent protests, during which part of the law library was burned down, caused damage estimated at R160-million.