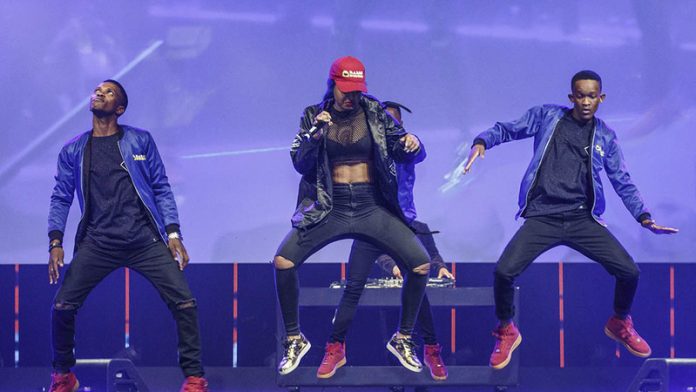 Gqom, perhaps no more than other forms of music, is a testosterone-driven genre where the record of female participation can sometimes go missing.

For example, Bhejane might take credit for uBaba ka Girl but the spirited, almost unhinged lead performance comes from a woman credited simply as Thando, who had no ambitions of being involved in the music scene. Similarly, the scene-setting intro to DJ Cndo and Lusiman’s Yamnand’ Into, is performed by a woman named Zinhle, who was a friend of Lusiman’s girlfriend.

The fact that Babes Wodumo is the first person (and perhaps the only person) you want to see in the video to her hit single Wololo is primarily what gives her claim to the self-styled title Queen of Gqom.

Babes, whose real name is Bongekile Simelane, is the red-maned preacher’s kid with the Instagram-wrecking vosho moves, a moniker that has become a movement unto itself, and luscious lips that are the only constant on a shape-shifting face that renders her anew in every photograph.

Babes’s moniker seems so meticulously chosen that she is now a self-perpetuating myth, with millions drinking her kool aid and some trailing the myth of a breakout star without knowing what the buzz is about.

Off stage, Babes can be seen working through choreographed moves with students who attend her West Ink Dance Academy, acting cute with her bae and inspiring a “free Babes” movement that wants to see her just once without having to dodge the hulking shadow of Mampintsha.

In interviews, Babes has the charming habit of refusing to speak English to interviewers, no matter how insistent the questioning, dodging the bullet that sought to shame first generation kwaito stars such as Mandoza and Boom Shaka. Babes is having none of the scrutiny that seeks to offer merit to one’s creations based on their ability to speak English.

Not too long ago, Babes trended following an interview with radio DJ Sbu for admitting that she did not know who Finance Minister Pravin Gordhan was. At that time, just one hit in, she had already inspired a legion of defenders, but it was her own retort that stood the test: “I don’t see anything wrong in that, he also doesn’t know me.”

Like the thousands of women who have graced Big Nuz videos, Babes started out in the anonymous zone of the tokenised video girl (Big Nuz’s Hawaii) who graduates to singing uncredited hooks (Big Nuz’s Tsege Tsege).

As the first artist released under her beau Mampintsha’s West Ink label, Babes’s emergence is both exciting and deflating.

The excitement comes from the injection of much-needed feminine energy into the young boys’ club that is gqom. With Wololo and, more recently, Mercedes, gqom – albeit a palatable version with little of the genre’s trademark grit – is inching towards mainstream South African acceptance, thanks in part to the phenom that is Babes Wodumo. The deflation is attributable to the nagging sense that Babes can hardly sneeze without the approval of her handlers.

To be arrested by Wololo’s catchiness is to feel the rhythmic potency of gqom. For the man regarded as one of the genre’s architects, DJ Sbucardo, gqom’s syncopation was a response to people-watching at clubs, and spotting the missing links in terms of their interaction with the drum pattern.

It is a moment not too dissimilar to Kool DJ Herc’s discovery of the magic a breakbeat could inflict on hordes with – to borrow from the principal architect of P-Funk George Clinton – ants in their pants and a need to dance.

And yet, for Mampintsha and the Afrotainment crew, gqom was, and is, a culture to be acknowledged only on their terms.

Mercedes, featuring Madanon, is an example of this. Whereas it was Madanon who first rhymed over gqom beats back in 2012, his first appearance alongside Babes has him as the featured artist in a supporting role that barely registers. This is after contributing more or less anonymously to Big Nuz’s For The Fans.

In Mercedes, Babes and Mampintsha toy around with the loaded symbolism of the noun, alluding to the Mercedes drug’s potency while having us believe that the lyrics are analogous to music.

In a sense, it is vintage gqom, a little anachronistic and unsurprising lyrically. Sonically, too, the beat has elements of gqom and a lot of trippy ad-libs but would not be out of place in a Big Nuz album. The song is disappointing on two levels: that Babes doesn’t dominate it in the way that she does Wololo, and that Madanon’s trademark “Uyeheni bo” appears to have been pulled out of his mouth and handed over to Babes, leaving him with a few insignificant ad-libs. Mercedes is a long way down from the high octane and cocky confidence on show in Wololo and has so much of Mampintsha in it that it may as well be a Big Nuz song.

As a cultural icon, Babes walks the fine line of being an exciting, expressionist female voice, versus the kept woman being closely policed by her lover and label owner. The second scenario is one that unsettles her fans. Reacting to rumours that the pair were engaged, the outcry on social media saw the emergence of #handsoffbabes hashtags and rants that Babes was “national treasure” and not one man’s squeeze.

In interviews, she claims they have bonded over knowing the hardships of being preacher’s kids and Mampintsha’s outsized generosity.

In the absence of an interview (her manager Victor Dlokolo fed us a line about calling us back for almost an entire work week), the lyrics to Wololo suggest Babes to be equally comfortable pledging allegiance to her benefactors as she is cautioning against the overconsumption of alcohol in the rapey environment of the music industry.

But Mercedes is a different type of mixed message, an attempt at marrying the no-holds-barred frankness of gqom culture with the conservatism of the mainstream music industry.

In this sense, she is walking straight into the celebrity trap where she must perform to an entire country’s expectations in a scramble to justify her existence. There is already an uncomfortable pressure on her to produce an album that, in that hallowed South African tradition, must be in time for that December rush, satisfying everybody from ventricose capitalist gods, our collective musical baggage and our morbid desire to live vicariously through celebrity.