​Students, protest in a way that doesn’t endanger your or your university’s future 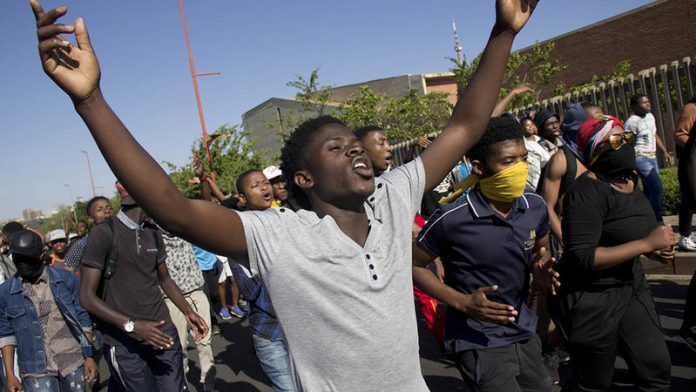 Watching students graduate is one of the most heartening experiences – more so when African students are capped and handed their degrees. The ululating affirms an unprecedented pride. Many of these students are the first in their families to have studied at university and received academic degrees.

My generation in the 1980s fought for and contributed to this realisation. We did not burn our universities, even at the height of apartheid repression, but appreciated that the privilege of education must be shared with all in the future.

Moreover, when we used the tactic of shutting down universities – for example, to challenge the banning of the United Democratic Front – we united all in the university community.

We utilised this collective power to demonstrate, in a nonviolent way, our opposition. Shutdown tactics would not have worked as an effective political tool if these conditions were not realised. A shutdown was merely a step towards strategic mass mobilisation and disciplined resistance in the streets: marching together with all against apartheid.

When students receive their degrees, the journey to this accomplishment cannot be ignored. Many come from families that are distressed by low incomes, the effect of drought, precarious work, high unemployment, hunger (53% of South Africans are food insecure) and increasing service costs.

These realities shape the aspirations of our students and lie at the roots of the demands for free, quality, university education. This demand is a challenge to the post-apartheid political economy.

South Africa’s transitional consensus and social contract has been undermined by failed globalisation and market-based policies. Wealth has been redistributed upward, moved off-shore and captured by corrupt transactions. The boundary between the market and the state has been reset in favour of markets.

With declining state support public universities are being driven increasingly into the clutches of the market and forced to operate in an exclusionary way. The instability at universities is not going to go away, given the stakes for present and future generations.

The damage done to universities during violent protests last year and this year now stands at more than R600-million. Academics cannot teach in such a context and neither can we remain silent. We cannot teach in a securitised environment and be indifferent.

Fear, entrenched positions and antagonism inhabit the world of the universities. Universities are at their limit and can be irreparably harmed. Achieving free, quality, higher education in this context of destroyed universities is not a victory.

Students have a right to protest and the space to do so exists at universities. But every struggle has its limits and constraints. Struggles also have unintended consequences, such that the violence on universities will legitimise a destabilising mode of politics for all institutions in society. It could also provide licence to the further securitisation of state-society relations. The student protests have the potential to avoid these pitfalls and it is not too late to do things differently.

South Africa’s economic crisis is further exacerbated by the onset of climate shocks, such as the drought, inducing increased food prices and hunger. Student protests are a symptom of these twin crises.

In this context, current and future generations of students are best understood as the “Anthropocene” generations, living in a new age marked by struggle with deep inequalities and a climate-driven world in which conditions to sustain life are going to be challenged.

A new vision for South Africa has to start with these realities so we think boldly about a just transition based on alternatives such as a basic income grants, public transport systems, commoning of resources, socially-owned renewable energy, climate jobs, zero waste, food sovereignty pathways and solidarity economies. The student protests are prompting us to think about society in a different way.

This means free, quality, education has to be located in an effort to renew a social contract for South Africa, as part of the just transition to address the economic and climate crisis. We need a new Codesa (Convention for a Democratic South Africa) now so all institutions take on the imperative of building capabilities to survive the climate crisis. Free and quality university education has to be the building block for such a social contract and approach.

This means South Africa’s leaders are faced with an opportunity to renew nation building to confront some of the greatest challenges facing human societies. The student protests are not a threat but an opening for another path.

The South African state, including the treasury, is failing to appreciate this imperative because of its technocratic approach. The announcement by the minister of higher education, while respecting the autonomy of universities and making a crucial concession in getting the state to carry the cost of fee increases for 2017 for households earning less than R600 000 (up from R122 000 to include the missing middle), does not go far enough to address this imperative.

His proposal re-enforces the commercialisation of universities, locks students into a debt-based loan scheme and takes forward the ANC’s fiscal populism of zero fee increases for some, but in a disingenuous way. It is far from where students are.

The wrath of students could have been mitigated if it was clear that he was working tirelessly to secure state support for placing universities firmly on a path towards decommodified education. The minister could have, for example, set the basis for converting the current student loan scheme into a merit-based bursary scheme, instead of adding the “missing middle”.

The minister could have made the case to business for an increase and greater percentage of the training levy to be channelled to universities, as part of a new social contract to position universities to build knowledge capabilities to lessen the effects of catastrophic climate change and for a sustainable green economy. This boost in subsidy could have been tied to bringing down the cost for the missing middle by universities.

At the same time, as an interim measure, universities could have considered increasing fees for those households with incomes above R600 000 to about 20% or more, given that universities are underpriced, for the rich, and in relation to their spend on private schools.

This is a version of the “wealth tax” that could have gone immediately into university budgets. Moreover, all graduates could have been given the choice of serving in a national climate jobs programme.

All of this would not have delivered free education now, for all, but would have moved the university system significantly in this direction and demonstrated a commitment to embed this logic institutionally.

Yes, the immediate response of the state to student demands could have been more transformative. Fixing conflict-ridden universities means addressing the crisis of market-led politics in South Africa. Lets hope our policymakers, politicians and university administrators understand this. Privatising public higher education is a dead end and not viable. It is time for a new policy direction and politics.

Students have led a struggle that affirms universities as a public good. They need to struggle in a manner that gives universities and themselves a future. They are not the only ones who want free, quality, university education.

Vishwas Satgar is an associate professor at the University of the Witwatersrand and an activist. He serves on the National Co-ordinating Committee of the South African Food Sovereignty Campaign.