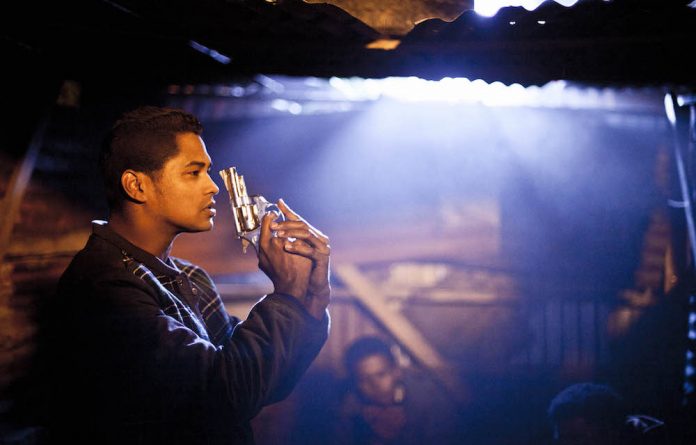 I have a room full of scripts but I never wanted to write Noem My Skollie. It haunted me.

In 2002, I had the first draft. Then I met David Max Brown, the producer, at Sithengi [Film and TV Market] and I gave him the script right there. He read it on his flight back to Jo’burg and, when he landed, he said: “I love your story.” So we worked together, writing and rewriting. When we applied for funding people said to him: “You have a good story but now you need to find a writer.” He said: “No, I’ve got a writer. John is going to write the story.” That’s when I went to Sediba, [the National Film and Video Foundation, NFVF] script- writing workshop.

I only got grade 8 in 1960, but I was on the course with people who had studied film at the London Film School and all that. I was the only coloured person there, the oldest one there and the only one from the Western Cape there. I was overwhelmed when I got there and they looked at me. The people thought I was a token, so I had to prove that I am there on merit. I knew nothing so I had to dig deep.

Every Monday when I came back from Jo’burg I wanted to quit, because I was angry about money. There was no income. They gave you per diem but I would buy books and so on because I was serious about writing. I am getting on in years but I was driven. And so the story developed.

In 2011 I got development funding and a script editor. Eighteen months later, the script editor got so tired of me and told me I must now step back from the project, because I apparently had project fatigue. I said: “Project fatigue? What is that? I get up every morning to write, I don’t know that word.” Then she got off the script, because they don’t understand what I’m trying to say.

“How can you eat a flower at the grave?” they asked. I know we did that. When a friend had fallen, we’d eat a flower at his grave, and that’s a threat in itself, because we are coming to get you. That’s the meaning. Now how do you explain to people all these things, when they think you are just a stupid coloured man who thinks he is a writer?

So I was fighting and swimming upstream. The script editor left and then a month later, [coproducer] Moshidi [Motshekgwa] came on board and the script flowed. So I was a protegé of NFVF, but when we applied for funding they refused. Ei! I hit the ground hard because I had given up my day job [as a security guard] at 50 years old to pursue my dream. Then Kyknet, MNet and the department of trade and industry came on board — that was when the NFVF came on board — and now we are here. I’ve also been approached by Penguin Books to write the book, and I’ll be doing that as soon as they give me the papers to sign.

Besides writing, I think my calling is working with youth at risk. I’ve done that for a long time. And I’m inspired to motivate and evoke dreams. At the one screening, I went to go and speak to gang members, but they didn’t know I was there. So after the film, the lights go on and I am standing there. And I spoke to them. I spoke from the heart. In the beginning of the film they were laughing because they could identify themselves with what was happening on the screen. And then it got serious and they became quieter and quieter. After the film they were silent, and it was like I was there in prison.

The next day, the one guy who organises the screening said to me: “John, something happened.” A mother of one of these gang members came to him. She was in tears. She said her son came home and told her: “Mom. I’m done with the gang life. I want a change.” Hosh! How’s that?

I am a coloured. I grew up in the ghettoes and I have been to prison and all that. Now, a white man can’t tell my story, or anybody else. You see people come here with their big cameras and their fat chequebooks. They stand a hundred metres from the township and they take photos and they tell stories.

They don’t know the heartbeat. The township has got a heartbeat. A pulse. It goes up and down. My director, Daryne Joshua, he comes from Bridgetown not too far away from where I was born. His father was involved with gangs and stuff like that. He knows the culture. He knows exactly what I’m talking about.

Daryne was the sixth director I had on this script. The director before him, you know what he did? I almost went crazy, bru. He changed my mother’s character into a prostitute. And she is a God-fearing woman.

You have to understand the dialect. In Blood In Blood Out, that Chinese dialect is so beautiful. We have our own dialect so that is why I left it in. In other South African films they get guys from Jo’burg and they speak a different type of Afrikaans from the Cape Flats. You can hear the difference. In Noem My Skollie the people were cast on the strength of knowing the township dialect. It’s got to roll off the tongue. That’s how it worked.

John Fredericks has either written, directed or produced many documentary and feature films, including Mr Devious, The Father Inside, Hard Living Kids (Tomorrow’s Heroes), Shooting Bokkie, Grumpies, Freedom is a Personal Journey and Girlhood for ETV.

​‘Kalushi’ is a meeting of history and cinema