A plan by the department of basic education to subject aspirant principals to a competency test has hit a brick wall after 93% of the successful candidates failed to write the assessment.

Only 103 of the 1 435 newly-appointed principals in the past financial year wrote the test. The 103 were from the Western Cape.

Guidelines for strengthening the administrative processes in the appointment of principals, including the implementation of a competency test, were discussed by the Council of Education Ministers (CEM) as far back as November 2011. The CEM comprises Basic Education Minister Angie Motshekga and the nine MECs of education.

Elijah Mhlanga, spokesperson for the department of basic education, said the decision to test was in response to the National Development Plan’s (NDP) call for candidates to undergo assessments “to determine their suitability”.

“Appointment processes have to change because shortlisting and interview processes alone remain inadequate as a means of appointing quality school managers. Interviews enable experience and knowledge to be probed but they only uncover the information which the interviewee chooses to share,” Mhlanga said.

The department said in its recently released annual report that competency tests had not been written in eight provinces because provincial education departments had not yet developed them.

It has since emerged that Gauteng had developed a test but had not implemented it for appointment purposes.

The report stated that the matter has been scheduled for discussion at the Education Labour Relations Council (ELRC), a bargaining council that promotes the maintenance of labour peace in the public education sector. 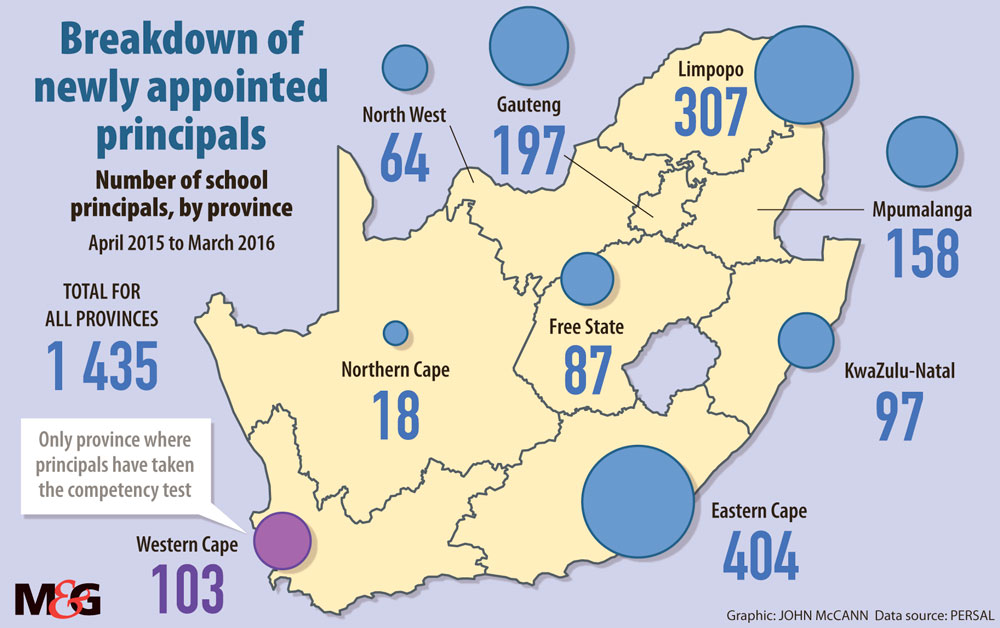 The report stated that a tender will be advertised to appoint a suitable service provider to develop and administer competency assessments for potential principals in all provinces in the 2017-2018 financial year.

In a bid to improve the quality of principals, the Western Cape education department piloted the introduction of competency-based assessments in 2014.

A principal who did not wish to be identified welcomed the idea of subjecting those who wanted to become principals to a competency test.

“An institution is only as strong as its leader. A principal deals with infrastructure, public finance and curriculum management, as well as the management of personnel. You have to be proficient and knowledgeable.”

He said some educators had been appointed as principals simply because of their affiliation to certain teacher unions.

He said the questions in the test should be based on categories that include leadership experience, organisational ability, professional development, community-based involvement and human relations.

“The dismal matric results, for example, are a strong indicator of a school that’s poorly managed.”

Mugwena Maluleke, general secretary of the South African Democratic Teachers’ Union, said the union did not accept or reject the move to get aspiring principals to write a competency test.

“We are willing to discuss it because it must be within other elements of leadership. We view the principal as very important so we don’t view a competency test as the only determinant.”

His union had tabled as an agenda item at the ELRC an overhaul of the entire appointments system.

“We must review the qualifications [of teachers], the years of experience and other requirements. We asked for the overhauling of those particular requirements that may include issues of competency tests or not, on the basis that we can have other better mechanisms to appoint principals.”

Brahm Fleisch, a professor in the educational leadership and policy studies unit at the University of the Witwatersrand, said: “My sense is that I don’t suspect it [competency tests] works but that’s based on my reading of the international context. We need to make absolutely certain that any new policy is based on substantial evidence that it’s successful in the South African context.”

He said he was keen to know if research had been conducted to suggest that it was an effective strategy.

“My worry is that it’s quite an imposition. If it works and there’s evidence that it’s a very useful way in which to differentiate the strong versus the weak principals, then it’s worthwhile.”

Rej Brijraj, chief executive of the South African Council for Educators, said it would have a discussion with the department on the feasibility of testing. “It will have to go through the ELRC to be accepted as an additional requirement for promotion.”

Mhlanga said the issue of testing had not been fully discussed at the ELRC because meetings had been postponed.

“The department believes that the discussions at the ELRC will centre on the nature and form of the tests rather than whether they should be implemented or not since the sector has been instructed to do so through the NDP which was adopted by the country as a whole.”

Mhlanga said a “variety of batteries”, including competency tests, should be used to select experienced, appropriate and competent principals.

Asked about questions that will be asked in the test, Mhlanga said it would be “premature” to provide this information.

“The skills of developing such a test lie outside the education department. The department will have to rely on registered psychologists with the HPCSA [Health Professions Council of South Africa] with accredited psychometric tools.”

He said a competency test was used to measure an individual’s ability “to deal with complexity, unpredictability and changing environment beyond knowledge and skills”.