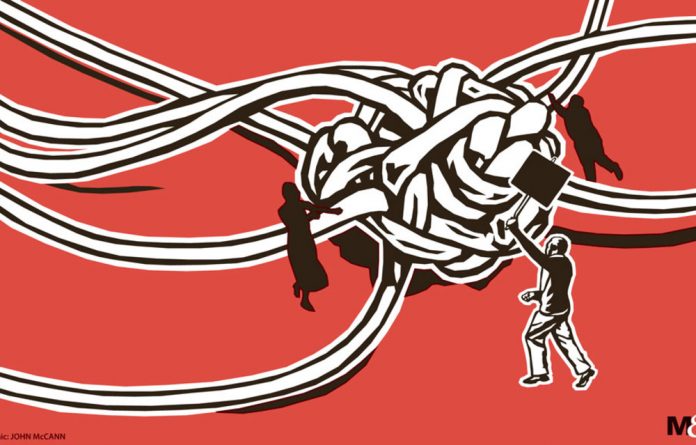 When a political order is well established, the mechanisms by which it sustains itself can be normalised to the point that they don’t appear to be matters of legitimate disputation. They may be hidden, like the scaffolding beneath a stage, or they may appear virtuous, as the pillars of civility.

But when a political order does not succeed in fully establishing its legitimacy, or its legitimacy begins to break down, its modes of authority cannot be entirely normalised. When a system of order seems to be giving way to something new, something still unclear, forms of exercising and legitimating power that had been rendered invisible or honourable can be rapidly called into question.

The bounds of the permissible are stretched, new sites and subjects of struggle can enter the terrain and new ideas and practices can be generated. People not ordinarily granted a right to presence on the political stage might make a dramatic entrance. These moments are often presented, and initially experienced, as a virtuous people taking on an oppressive, corrupt or distant elite.

Sometimes breaches in the established order come to be marked in history as events, as moments of collective possibility with a universal resonance. The Haitian Revolution from 1791 to 1804, the Paris Commune in 1871, the revolts in Budapest in 1956 and Prague in 1968 or, more recently, the occupation of Tahrir Square in Cairo in 2011 can all be placed in this category.

At other times the entry of new forms of popular political action onto the political terrain is an attempt to reorder society, and relations of domination and accumulation, on an authoritarian and exclusionary basis. The work of turning neighbours into enemies is often a fundamental feature of these conjunctures. The attacks on Jewish people in cities across Germany in 1938, the violence against Chinese people in Jakarta in 1988 and the anti-Muslim pogrom in the Indian state of Gujarat in 2002 are instances of this.

But the consequences of calling people on to the political stage outside of forms of previously authorised engagement exceed any distinction between left and right. Contenders for power in an interregnum, and with an eye on the new order to come, often find themselves in forms of contestation internal to their broad struggle that, even when they are not openly declared, carry real political stakes. Movements towards emancipation, including those with a universal dimension, have frequently carried with them new forms of domination.

National liberation movements and projects organised in the name of the working class have ended in new forms of authoritarianism, exclusion and exploitation. There is no progressive project that is not limited, contradictory and at permanent risk of degeneration. There is always contestation in struggle. Critique is a permanent obligation.

We inhabit a global moment in which the social suffering, and at times devastation, consequent to the subordination of society to capital, has led to a deep suspicion of abstract rights, technocratic forms of decision-making and political elites.

The idea of the people as the authentic foundation for the exercise of power has acquired a new life. This has taken progressive forms that aim to expand inclusion, deepen democracy and, in many cases, extend it into the economic sphere. But the turn towards an idea of the ultimate sovereignty of the people has also taken reactionary forms that are attracted to exclusionary and authoritarian forms of politics.

In the United States the contrast between Occupy, and later Black Lives Matters and the Bernie Sanders campaign on one side, and the Tea Party and the Donald Trump campaign on the other, offers a clear illustration of this. But we can also look at the protests against corruption in Brazil in 2015 and 2016, or the ongoing attempts to mobilise right-wing nationalism to suppress academic freedom at Jawaharlal Nehru University in Delhi, as examples of forms of populism that are exclusionary and authoritarian.

In the US, Brazil and India – or Russia or Turkey – the line between left and right is often drawn very clearly. There is a striking contrast between left and right, between forms of politics that seek to build democratic counterpower, and to extend it into the economic realm, and forms of politics that aim to mobilise authoritarian nationalism, often scapegoating vulnerable minorities for economic distress, and to ally with predatory forms of capital while actively entrenching exclusion.

Things play out a little differently in South Africa. Because, with the exception of Palestine, the end of apartheid came so much later than the end of formal colonialism elsewhere, we still inhabit a moment in which the language of the left, and of national liberation, sustains extraordinary authority.

Some of that authority derives from the legitimacy of previous struggles and is orientated to the past. But some of its authority derives from the fact that our society sustains colonial features and is orientated to the present and the future. At the same time there is not a popular right-wing project that dares to speak its name. The result is that much of our politics plays out within a set of ways of speaking, performing and affirming lineage that present themselves as forms of left or left-nationalist populism.

But authoritarianism and chauvinism abound. This includes the classic tropes of the far right – anti-Semitism, homophobia and sexism. It also includes the primary trope of the contemporary right – hostility to migrants. On this terrain King Goodwill Zwelithini, Johannesburg mayor Herman Mashaba, the state xenophobia of Operation Fiela and numerous local state officials and political entrepreneurs whose names seldom enter the public sphere find common ground. There is also support for the most predatory forms of capital, and vigorous attempts to expand its reach into the state in the name of the people.

Emancipatory and reactionary currents are often simultaneously present in the same organisations, the same political aesthetic, the same broad political frameworks and the same spaces. The simultaneous presence of radical left or nationalist rhetoric with ideas and practices that would ordinarily be seen as typical of the right, including the far right, is present in and out of the ANC. It is present from Parliament to the campus, the factory floor and the urban land occupation.

It is not unusual for the same individuals to take progressive positions in some respects and to sound like Trump supporters, or even Trump himself, in other respects. The same dynamic is often evident in forms of organisation and networks, often locally constituted, that are steadily building forms of power outside, alongside and in the state, and that are shaping the state, in progressive and reactionary ways, from below.

One result of this is that when a xenophobic mob, resolved to use violence to intimidate, exclude and appropriate, is mustered and mobilised the language and performance used to achieve this is, in some respects, likely to sound and look like the anti-apartheid struggle and contemporary struggles for inclusion.

The way in which radically different forms of popular contestation can appear simultaneously was dramatised in Grahamstown on October 21 2015. As students marched out of the university, in support of an eminently progressive set of demands around matters such as fees and antiracism, a group of taxis arrived at the City Hall, many emblazoned with threatening xenophobic posters. While the students marched on one side of the small town, shops and homes were attacked on the other.

Muslims were the explicit target of the attacks and looting. One action was taken in the name of black students, the other in the name of black business. Both framed their actions as an insistence on the realisation of the long-denied promise of the post-apartheid order. And although there were striking differences in how the two mobilisations were organised and presented, some of the slogans, the presentation of political lineages and so on were similar.

This was not solely a matter of a gulf between town and gown. As events unfolded the organisation that offered the most sustained support for the people under attack, and their families, including, on occasion, direct confrontation with the mob, was the Unemployed People’s Movement – an organisation that draws its membership from the same milieu as the political base for the local business and political class that organised, enabled and legitimated the xenophobic attacks.

As events unfolded on campus in the months to come, democratic forms of politics, in which women and gay people were often at the forefront, were rivalled, from within the student body, by forms of politics marked by chauvinism and authoritarianism.

We find ourselves in a situation in which actors can present themselves and be received as radical, or as located within the trajectory of a long struggle for justice, while taking positions usually associated with the right. What Frantz Fanon called “the brutality of thought and mistrust of subtlety” that frequently characterises many forms of political engagement, and a good deal of the public sphere, in South Africa carries real and urgent dangers.

One of the most pressing obligations of the moment is the sort of intellectual, ethical and strategic political seriousness that can give things their right names. We need to undertake the careful labour of disentangling the contradictory threads that, across our society, are woven into many of the new forces cohering and emerging as the legitimacy of the established order frays.

Richard Pithouse’s new book, Writing the Decline: On the Struggle for South Africa’s Democracy, is published by Jacana