​Honey for the history books 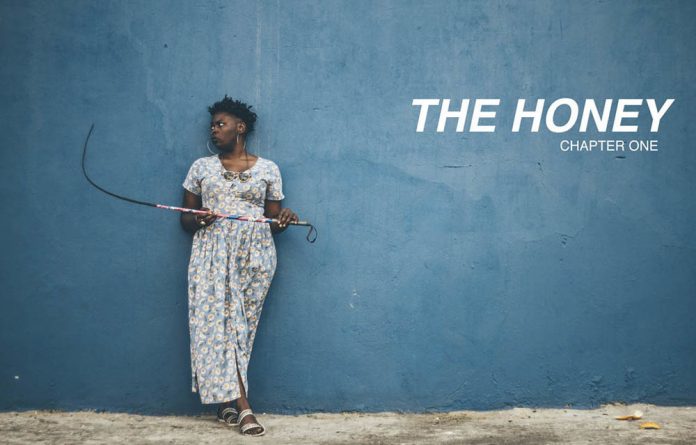 When Johannesburg-based graphic designer and art director Rendani Nemakhavhani partnered with photographer Kgomotso Neto Tleane in 2016, their collaboration resulted in the first instalment of The Honey, an ongoing photo novella that celebrates black love, Nineties nostalgia and narrative photography.

Following the third and latest instalment of The Honey, which launched on April 6 at Umuzi Studios, Nemakhavhani, who plays Aus’ Honey, and Tleane, who plays Aus Honey’s lover Gavini, spoke about the latest iteration of the series which sees them collaborate with musician Nonku Phiri and director Odendaal Esterhuyse.

In much of the coverage of The Honey, it’s often mentioned that Honey and Gavini are inspired by iconic Yizo Yizo characters Chester and Papa Action. Do you agree?
Rendani: I think it works in the inverse, where Rendani and Kgomotso were inspired by Yizo Yizo to create a story line that speaks to where we think Chester and Papa Action would be, had they been a couple living in 2016. They love money and fast cars but, most importantly, they will always love each other.

I feel like we don’t have a violent nature but we love the idea that the Yizo Yizo characters exuded an almost indestructible invincibility. Their environment was very chaotic and ours also tends to be chaotic, but we live our best lives regardless. Honey and Gavini are positive and a very realistic version of love and hope and vulnerability in a black community. I feel like I relate to Chester as a liker of nice things. That’s the real me. I like nice things fam, there’s no way around it.

You’ve both collaborated with a number of different artists as The Honey developed from chapter to chapter. How did you go about choosing them?
Kgomotso: By the time we were doing The Honeyversary [the first anniversary of The Honey] collaboration, we wanted to experiment with other photographers on the project. We wanted to see how different photographers with a distinct style would interpret The Honey. Andile Buka and Anthony Bila were a really great fit and obvious choice since they’re both really amazing photographers and their style is quite different.

Rendani: Our most recent showcase was a collaboration where we partnered with singer/songwriter Nonku Phiri and director Odendaal Esterhuyse. Nonku Phiri came across our work online and she loved it and asked whether we’d be interested in working with her for a short film based on her song Regrettables. We couldn’t resist, and so here we are. I aspire to be Honey in reality, so wherever the opportunity presents itself for us to live out the characters, we go for it. We’ve committed to doing this, especially in 2017.

We’re open to working with brands and people with whom we are aligned — both in a personal capacity, as well as a professional capacity. As long as we get to keep our authenticity within these collaborations, then we’re good to go.

The most important terms and conditions of working with us are trusting that we are capable of producing high quality work — giving us creative control, acknowledging our contributions and also paying us accordingly — we feel that we are of international standards.

So much of your work is all about ownership, representation and authentic storytelling. The common phrase FUBU, or For Us, By Us, definitely comes to mind when I think about The Honey.
Rendani: The Honey marks the beginning of not having to explain myself as a person, and as a creator of work that represents blackness to Western society. “For Us, By Us” is the perfect description because that’s exactly what it is. So it’s okay if people don’t understand the work. When we create our work, we create it from our perspective and our experiences.

We don’t create the work for someone to get it. We create the work mainly for us. Kgomotso and I come from the same background so it’s easy to understand. If people want to know what it means, we’ll explain it in the best way possible. However, they must be aware that it’s probably a watered-down explanation, because so much gets lost in accommodation and direct translations.

Not subscribing to the pressures of the audience is also necessary for the story and the project to grow. But I’m also — and I’m still debating with myself about this — moving towards separating the business aspect of it from myself, Rendani.

Last year you exhibited at the Turbine Art Fair, which you called your “debut into the art world”. How was that experience?
Rendani: It was crazy! But crazy in a good way and a bit overwhelming — mostly because we were moving into a zone which rattled our comfort. It’s safe to say that it was also life changing. That world is so closed off and can be tricky. I do, however, feel like we’re working at it. I also feel that our work doesn’t exactly read as traditional art, so I think we take some getting used to in that sphere.

What do you hope for The Honey?
Kgomotso: For me, the dream is to create work that can be used as a reference. This shit must go into the history books, must be on screens, people must study what The Honey is, [and] how and why people are reacting to it the way that they are. Archiving is really important. I work really hard to create work that speaks to and represents who I am as a black person in the most honest way. My goal is to create work that will go down in history.

Rendani: Creating art in South Africa right now feels like “the war” that I’m fighting, through this gift. I want black people to be happy and know that the world is theirs. Honey wants to show you that you can be whatever and whoever you want to be, despite your adversities.

I also hope that people are moved and feel proud to be represented in this manner. The Honey is an extremely personal project that at times feels like a calling. This project comes from a very fragile place within me. I never want to lose the essence of it, which is the idea that “The Honey Shall Govern”. This is where I get to explore myself as an artist, where “artist” is a term I’m still trying to identify as, coming from a design background.

It’s definitely starting to feel like it’s becoming bigger than us. When you know that what you’re doing is close to revolutionary, you want the message to be as authentic and as relatable as possible.

To keep up to date with The Honey and Gavini visit allhailthehoney.com.