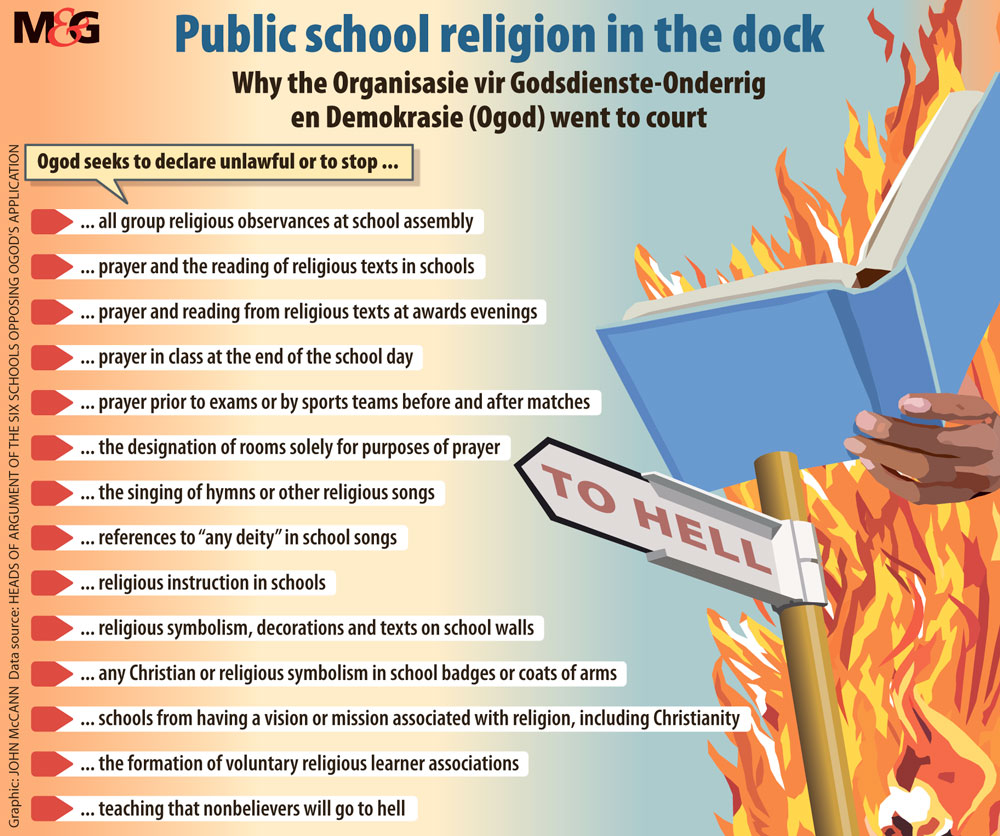 The right of public schools to single out one religion to foster at school will come under the spotlight in the high court next month in what is being described as a watershed case.

Nongovernmental organisation Ogod (Organisasie vir Godsdienste-Onderrig en Demokrasie) is seeking an order declaring that it is unconstitutional for any public school to promote adherence to only one or predominantly one religion.

Ogod is asking the court to interdict six schools from participating in Christian religious observances at school assembly. This includes reading sacred texts, opening assembly and closing the school day with a prayer, as well as praying before exams or before and after sports matches.

The NGO, which vows on its website to eradicate religious indoctrination in public schools, is also seeking a ban on the singing of hymns or other religious songs, as well as a ban on Christian symbolism in the school badge or coat of arms.

The schools cited in the court case are Laërskool Randhart, Laërskool Baanbreker, Laërskool Garsfontein and Hoërskool Linden — all in Gauteng — and two schools in Oudtshoorn in the Western Cape.

Represented by the Federation of Governing Bodies of South African Schools (Fedsas), the schools, which are opposing the application, have said they have a Christian ethos and promote Christian values because the majority of their learners belong to the Christian faith.

In their heads of argument, the schools describe Ogod as a “radical atheist organisation” whose leader “deliberately offends individuals who hold religious beliefs”.

The schools maintain that the relief sought is “designed to sterilise South African public schools of religion and create an environment that suits only learners who are atheist or religiously indifferent”.

They argue that, if Ogod’s application is granted, it will have the effect of eliminating religious observances from all schools in the country.

Ogod has been battling with the schools since 2014 when its founder, Hans Pietersen, tried to interdict them from advertising themselves as Christian.

The schools, however, argue in court documents that participation in religious observances at school assembly and elsewhere was voluntary and that any learners who didn’t want to take part were accommodated in “supervised classes” or were allowed to arrive late at school.

Significantly, the schools have made a counterapplication, seeking an order declaring parts of the national policy on religion and education unconstitutional.

The policy took effect in 2003 during the late Kader Asmal’s tenure as education minister.

The schools maintain that the policy is not binding in law on them or their governing bodies, saying: “Insofar as the minister [Asmal] purported to make binding policy outside the confines of his powers, the policy provisions are invalid. The sections of the policy on religious instruction and religious observances are, for that reason alone, unconstitutional and invalid.”

In their court papers they state: “On a practical and concrete level, at public schools such as the respondent schools it would be confusing, if not distressing, for educators and learners to have conducted religious observances that were not Christian but multireligious in nature.”

In response, Basic Education Minister Angie Motshekga has asked the court to dismiss the schools’ “ill-conceived” constitutional attack on the state’s religion and education policy.

The schools believe the governing body is the “appropriate public authority” to determine a school’s religion policy, but Motshekga’s counsel, Matthew Chaskalson SC, argues that the rules made by the governing body must be informed by the policy.

“The state … cannot allow public schools to be governed purely in the interests of their current learners and their parents. Public schools are public assets, which must ultimately serve the broader public interest,” he says.

There is no imposition of religiously diverse observances on a school community in which the majority of learners belonged to a single religious faith, argues the minister.

“We point out that to allow a notionally uniform school religious community to decide that religious observances at the school would not be diverse would serve to discourage other learners from joining that school.”

Chaskalson adds: “The contention that schools, as juristic persons, have a fundamental right to religion is simply unfounded.”

Freedom of Religion South Africa, a nonprofit Christian organisation aimed at protecting and promoting religious freedom, says if Ogod were to win the court battle, it would mean the end of scripture reading and prayer as well as other Christian activities in public schools.

Freedom of Religion South Africa’s executive director, Michael Swain, says the question the court will have to answer is not whether religion has a place in public schools, but what the boundaries are — especially in the context of the six schools that are named in the court action, all of which have a learner population that is almost 100% Christian.

Paul Colditz, the chief executive of Fedsas, says the case is extremely important not only for education but also for the country as a whole.

“It will determine the kind of country we want to live in: a country where courts are used to suppress the freedom of the people to express and manifest their beliefs and religions, or a country where people are free to be what they want to be.”