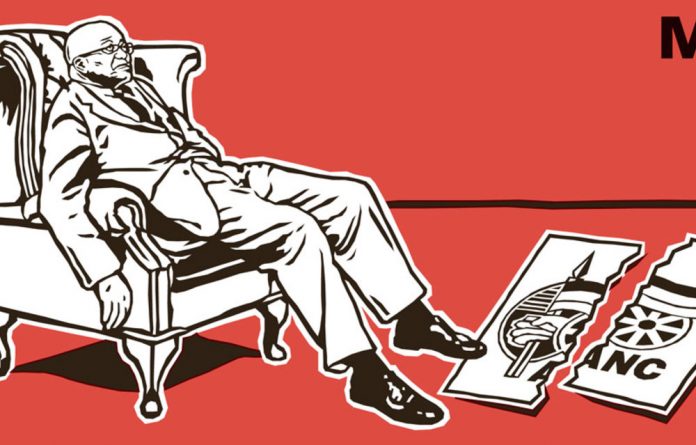 As President Jacob Zuma enters the Hamburg Messe on Friday, venue of this year’s G20 summit, and is greeted by German Chancellor Angela Merkel, he will feel a very long way away from Soweto’s Nasrec Expo Centre – scene of the ANC policy conference that ended on Wednesday after six gruelling days.

And as he reclines in a big leather armchair for the informal “leader’s retreat” immediately afterwards, and comes face to face with United States President Donald Trump for the first time, Zuma may well ask himself whether he has gone from the sublime to the ridiculous or the ridiculous to the sublime.

Trump can no longer be described as “light entertainment”, but after the attritional, hand-to-hand combat of Nasrec, the annual meeting of 19 of the world’s most powerful leaders may seem like light relief for the president of an organisation as deeply troubled as the ANC.

In the evening, when Zuma sits through the 74 minutes of Beethoven’s Ninth Symphony at the magnificent new Elbphilharmonie concert hall, he will no doubt reflect on the mess that he has left behind and contemplate, as ever, whether his grip on power in the ANC, whether directly or indirectly through his proxies and beholden lieutenants, is holding or slipping.

The policy conference was certainly no ode to joy; it was a cacophony of noise and often angry belligerence – not a choral symphony.

Raw politics – meaning the control and dominance of key processes – inevitably trumped policy. In this respect, the fifth policy conference of the ANC was no different from the previous four, except that whereas previously politics and policy cohabited relatively comfortably, now they formed a congealing embrace.

On occasion, these conferences have yielded important policy shifts or fresh ideas – such as the pre-Polokwane policy conference in 2007, where the National Health Insurance began its tortoise-like journey towards reality; or the national general council in 2010, where there were substantive and serious attempts to open up new ground on strategic state intervention in the economy.

I write as the policy conference is closing, and the leadership must still feverishly tidy up the final versions of the recommendations that will now wend their way through branch, regional and provincial meetings ahead of their final destination in Midrand at the ANC’s national conference in December, so a final analysis is not yet possible. But it is already clear that nothing of real significance will emerge in terms of substantive policy and that, as a result, the status quo will hold.

What is more interesting is to ask the question: Why?

Partly, this is because of the toxic politics. The ANC faces an unprecedented situation where not only are there two distinct camps in the organisation contesting power and supremacy, but the rivals in the race to succeed Zuma as president head factions that also oppose each other in terms of “policy” (loosely defined).

If this was a real “battle of ideas”, with contrasting worldviews and ideo-logical platforms set out for genuine discussion and debate – like, dare I say it, a contest between Blairites and Corbynistas in the modern Labour Party in Britain – then this might be a good thing, representing an opportunity for the ANC to sharpen its thinking and set its policy course in a more decisive direction.

If, for example, the debate was a carefully nuanced one about what exactly “independence” means for a Reserve Bank in the modern era and how it should relate to the democratic state when determining monetary policy goals, including inflation targets, then this too would be healthy.

But this was not what unfolded at Nasrec. When six or seven hours are spent arguing over whether the word “white” should be attached to the concept of “monopoly capital”, then any hope of a detailed consideration of complicated policy choices evaporates.

The Nkosazana Dlamini-Zuma faction – branded “philistines” by hardened Mbekites – are happy with the ANC’s organisational status quo, because it has delivered them enough power to prosecute a dual strategy of party political and state capture over the past decade, but are also eager to secure an even more aggressive form of predatory state capture.

Against this backdrop, for the progressive left the best that could be hoped for was a “holding action”, in which the state-capture project was at least arrested if not pushed back. As the Cyril Ramaphosa 17 “constitutionalists” (better known as the CR17 lobby group) seek to contain the nationalist populists, so a form of mutually hurting stalemate emerges, with the most difficult policy issues fudged to preserve some kind of parity ahead of the endgame in December, with the succession too tight to call.

In turn, this plays into the hands of the technocrats who have, from the executive branch of government, dominated ANC policy since the 1990s. There is resentment about this, which makes it easy for the populist nationalists to mobilise a new generation of angry demagogues in support of the politics of elite accumulation by attacking institutions such as the Reserve Bank or treasury, which are presented as “anti-transformation”.

Like an artichoke, there are layers upon layers of complexity and contradiction to be peeled away before one can get close to what should be the heart of matter: What policies can extricate South Africa from economic crisis, and how can a progressive democratic state secure the structural reforms to the economy which are necessary to dramatically reduce unsustainable levels of unemployment and inequality?

The policy conference failed – inevitably, given the leadership crisis – to navigate a way out of this paralysis.

Instead, the 11 commissions produced reports of unprecedented unevenness. A team of scribes and rapporteurs was deployed to serve the commissions and liaise between them and the members of the national executive committee, whose unenviable task it was to then panelbeat the reports into something vaguely cogent. What emerged was, according to more than one of the team, “without any depth”.

Interestingly, many of the core group of scribes have played this role on many such occasions in the past. As one remarked to me: “We were all sitting around and wondering: Are we here again because we are disciplined members of the ANC family or are we here to bring some calm and maturity, and to make some policy sense, amidst all the chaos and sense of crisis?”

These are the sharply divergent, parallel universes of the ANC; remnants of its erstwhile sophistication and philosophical capacity for self-reflection represent islands in a sea of mediocrity and self-interested opportunism.

When Zuma chose to attack the “so-called stalwarts” in his opening speech a week ago, and tried to whip up outrage among the rank-and-file delegates seated in front of him by accusing the stalwarts of disregarding the branches, for once he spoke the truth: the stalwarts neither recognise nor respect the current ANC, an organisation so divided, so weak in capacity, so poisoned by corruption.

Despite secretary general Gwede Mantashe’s shambling attempt to sashay around the deepening social contradictions in the ANC at his press conference last weekend, his report on the state of the ANC was relatively clear and candid in its diagnosis. The ANC’s schizophrenia has disabled it.

Given the objective circumstances, it is beyond reason to think that in its current predicament the ANC can lead change in South Africa. Like its leader, it is trapped between its past and its future.

There is a paradigm shift in global politics under way, presenting new opportunities for progressive policy-makers (as well as old threats from right-wing populists). Preoccupied by its own self-indulgent proxy battles, the ANC is all set to miss the moment entirely.

Richard Calland
Richard Calland has for over twenty years been working in the fields of democratic governance and sustainable development in South Africa and beyond. Based at the University of Cape Town (UCT), where he is Associate Professor in Public Law, he built and led its Democratic Governance & Rights Unit from 2007-2016.
Facebook
Twitter
WhatsApp
Linkedin
ReddIt
Email
Print