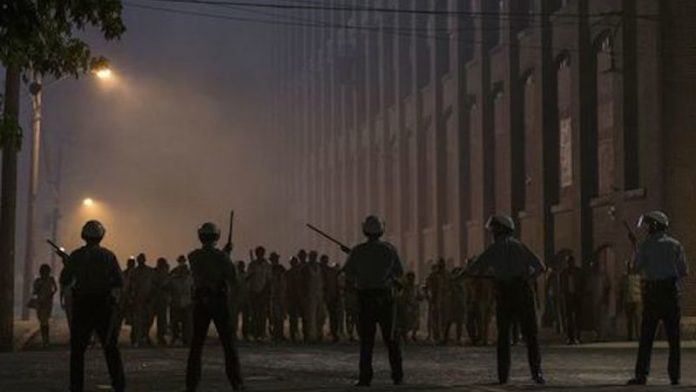 Detroit. July 25 1967. The Motor City is roiling in a tempest of riots. What ignited the inferno is a police raid on an illegal after-hours drinking club in a black neighbourhood, better known as a “blind pig”. The black clientele is rounded up and arrested. A stone is thrown through a shop window. In this racially tense milieu, a community fights back. The National Guard is called in, leaving 43 people dead, more than 1 000 injured and 7 000 people under arrest.

Kathryn Bigelow’s film adaptation of Detroit revolves around what is known as the Algiers Motel incident, an appalling case of police brutality and murder in the midst of wider chaos in the summer of 1967.

The film’s title gave me reason to pause. How does one dramatise an entire city? It does make marketing sense, because 2017 is the 60th anniversary of the rebellion, and I can’t help but think this is exploitative and demeaning to the memory of what happened that summer.

The film opens with an animated depiction of the great migration, based on Jacob Lawrence’s artwork The Migration of the Negro (Series), and then goes into the police raid. The opening sequence provides a compelling brief on urban migration and touches on the themes that would later mutate into the riots of 1967.

There are narratives in Detroit where I feel that Bigelow is trying to pass off racist, murderous cops as a few bad apples instead of showing a system of inequality and racism in a rotten police department. Ahistorical depictions of the three people murdered by the cops as older than they actually were (teenagers), the existence of a starter gun (never found) and an implied notion that the three youngsters were somehow to blame for their own deaths (at the autopsies, no alcohol or narcotics were found in their blood).

Should you watch Detroit? No. Save your coins and read John Hersey’s book, The Algiers Motel Incident, instead.

The events that occurred at the Algiers Motel are important and would have made for compelling viewing but, based on Bigelow’s earlier movies, she isn’t too interested in the legal and cultural aspects of historically important events but rather in torture and bloodshed.

Detroit leaves a thick lump in your throat, an uncomfortable lingering sense of injustice and disgust at what you have just witnessed. And that may just be the film’s primary goal.

Kathryn Bigelow’s latest visceral offering has faced no shortage of criticism. A large chunk of the ire focuses on the film’s limited telling of the event that the title alludes to — the 1967 political unrest in the United States’s Motor City. Instead, the plot revolves around the Algiers Motel incident, in which three black men were killed by police during a raid.

The pain and suffering at the Algiers is a telling of the dire consequences that arise when an already trigger-happy police force have their sensibilities insulted. They lose their shit when two white women are discovered sitting in one of the rooms with a black man. When he reveals he was an airforce pilot in Vietnam — shattering their perceptions of him as a lowlife pimp — the beatings only intensify.

The violence is orchestrated mainly by one cop — a scary performance by Will Poulter — who prods and encourages the others into more acts of depravity. What the film does well, though, is illustrate the crimes of inaction, pleading ignorance and looking the other way.

In the first act, Poulter shoots and kills a suspected looter in the back. An annoyed police chief recommends he be charged with murder but nonetheless sends him back on the beat with an indifferent “don’t do it again” warning, presumably unenthused by the admin of replacing an officer during trying times.

At the Algiers itself, the soldier mixed up in the mess appears conflicted, disturbed even, by the blatant torture unfolding in front of him. Ultimately, he does nothing to stop it, bar ensuring the white women are escorted to safety. When it’s clear the situation has escalated beyond repair, he solemnly excuses himself from the scene and declares “this was police business”.

Even the justice system is unsuccessful in policing its own kind and offer recourse for a night of tragedy.

Detroit no doubt has its flaws. But if its goal is to act as a microcosm for white complicity then it succeeds. Given that we live in an era in which we too easily change the channel when our realities become too gruesome to witness, this may be a timely admonition.

Of course, it has also rightly been pointed out that a story about black pain is not necessarily Bigelow’s to tell in the first place. Her film is not an attempt to understand black pain or comprehend the socioeconomic realities that sparked riots, violence and death. For better or worse, this is a film by white people, for white people. It’s a harrowing tale of how the ruthless machinations of whiteness operate to subjugate those deemed inferior.

Sasria to get R3.9bn from Treasury to cover July unrest insurance claims