Why is the US chasing ‘Congolese rebels’ in the Northern Cape?

The arrival of United States army troops in South Africa for their third joint training military exercise in July sparked panic on social media: “What are they planning? Are they coming to invade us? This is what the ANC is warning us about!”

These were some of the reactions to early reports that an American C-17 Globemaster transport aircraft had entered South African airspace and was going to land at Upington.

But among South African National Defence Force (SANDF) generals and troops, there was a straightening of uniforms in anticipation of hosting the most powerful military in the world.

“It’s like having a cousin over that you don’t like. You accommodate them because you’re family, but you know you have to sleep with one eye open,” quipped a captain.

The US soldiers were here for the third joint training exercise between the US and South African militaries. The exercises offer the US military a window into Africa and help to establish relationships between commanders on both sides. South African troops are also exposed to cutting-edge training and equipment.

The joint programme, which includes preparations for kidnappings, riots, sniper engagements and search and attack operations, are also conducted with other African countries.

This year’s exercises took place at Lohatla, the South African army’s main training facility in the Northern Cape. It is a 2 600km2 area of bushveld between Upington and Anglo American’s Kumba iron ore mine in Sishen.

The US contingent of 300 troops came well prepared, bringing their own Humvee trucks — like those used in Iraq and Afghanistan — weapons, food and medical equipment. Generals from the US military’s Africa Command, based in Germany, were despatched to facilitate the training. Among the US troops was the elite 101st Airborne Division, which also conducted training in Somalia this year. 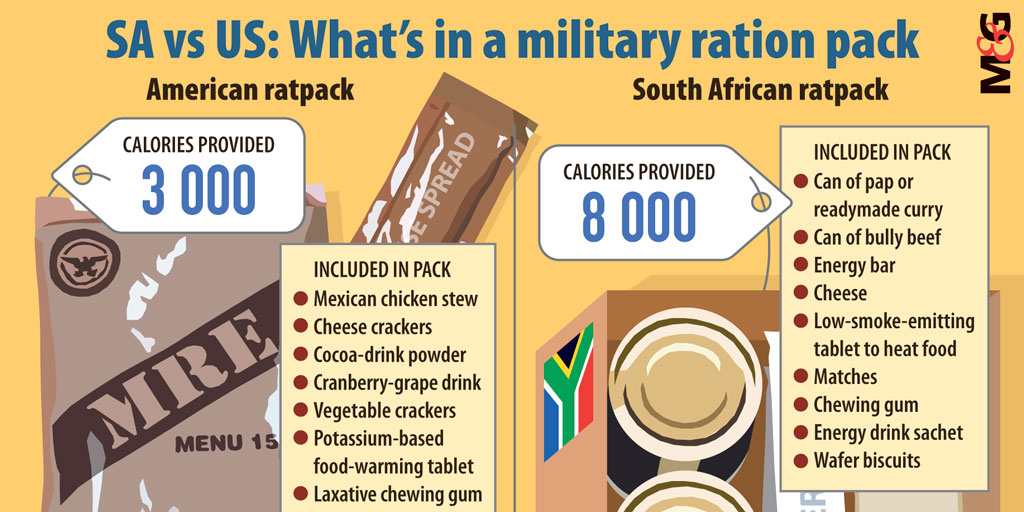 This particular exercise was meant to mimic the conditions in the Democratic Republic of Congo (DRC), where South African troops are stationed with those of other countries as part of a United Nations peacekeeping mission.

Peacekeeping is not necessarily the US’s strong suit. “The [US] are usually part of the intervention force. They will go into a country that’s got problems and stabilise the country. The UN then gets a peacekeeping force to stabilise and start with the peacebuilding process, which is far less focused on the military and more on the political and civilian situation,” SANDF General Gustav Lategan said.

The most dangerous operations include hunting down rebel leaders, or incursions into the “red triangle of death”, a heavily wooded section of the eastern Congo forest, where rebels are known to shelter after battle.

At Lohatla, the thick Kalahari grass, bright red sand and scattered trees don’t mimic the Congolese rainforest, but still provide some kind of cover. In these conditions, South African soldiers have much more experience than their US counterparts. For some of the fresher American faces, this was the first time they have stepped on to African soil.

The US’s most notable recent conflict deployments have been in Afghanistan and Iraq, where troops have been operating in a desolate environment with little shrubbery, as well as mountainous areas that make it difficult to find and fight rebels.

During the exercise, South African soldiers taught their US counterparts bushcraft — clever survival tips such as how to draw water from the leaves of a tree and how to manoeuvre through the veld undetected.

They also offered tips on how to deal with protests. In one training scenario, “villagers”, whose food had been taken by rebels during an invasion, marched on a US encampment, demanding help. 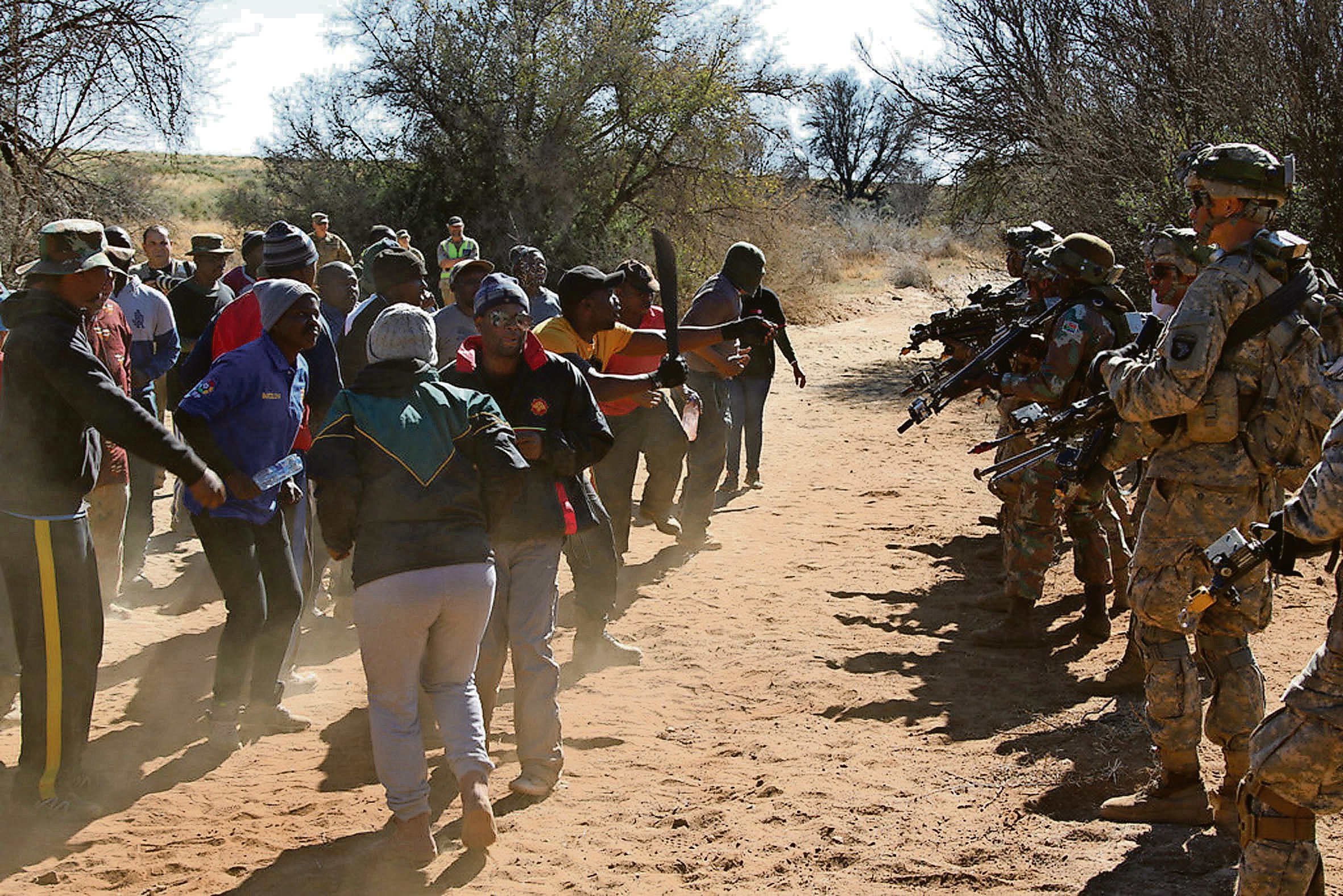 “Their first instinct was to point their guns,” admitted Sergeant Chris Bridson, a veteran of the Iraq war. “But the South African troops explained that the protocol was to sit down with the madala of the area and agree on how to proceed.”

When it came to firepower and equipment, the South Africans were outgunned. The M5 and M6 rifles used by the US Army are lighter than the SANDF’s R4s and R5s, and the US telescopes used for scouting and night fighting are light years ahead of South Africa’s.

“They have got night sights — it’s an optical sight on their helmets and they’ve got 50-50 vision at night. It’s good but these things cost $80 000 per set. We just don’t have that money, that’s the bottom line. It’s available on the open market, but we don’t have the cash,” Lategan said.

Getting two armies to work together isn’t always easy. Mismatched equipment as well as different rules and doctrines can make it hard to co-ordinate responses. “We have our own doctrine, which is mostly still the same as the one used before [during the apartheid era],” said Lategan.

“But of course we have learnt our own lessons from deployments to Sudan and Burundi. And internally, things like the Marikana incident between the police and civilians … that forced us to look at our doctrine, how would we have handled the situation.

“But it was agreed they leave their classified information and weapons at home and we do the same, and we work with what we have,” he added.

Although they both serve on the same peacekeeping mission in the DRC, the US and South African troops don’t often work alongside each other, because the US doesn’t have as many boots on the ground there. The SANDF maintains a contingent of up to 1 300 soldiers, mostly based in the east of the country. American personnel tend to occupy leadership positions.

“I know I’m safe if I’m with the South African or Guatemalan special forces. They are the only ones who can go into the red triangle of death,” said a South African soldier who has recently returned from a mission near Goma. “The US guys are mostly part of the command structure, doing targeting or sending out orders, along with the Belgians — they run the show there.”

In Lohatla, training wraps up with a live-fire demonstration in which the 101st Airborne raids a hut containing “rebel leaders”. Generals from both South Africa and the US watch the exercise from a nearby hilltop, through binoculars, while listening to a live broadcast of the communications between the troops.

Missiles fly overhead. A smoke bomb provides cover. The sound of gunfire and explosions continues for another 25 minutes before the “enemy” is neutralised with two anti-tank missiles.

“Their missile targeting is on the mark. They hardly miss … But look, they are moving slowly, some are walking,” said one SANDF general as he followed the exercise.

US platoon leader Jed Lee summed up his troops’ performance. “It wasn’t as fast as the last time, but definitely more precision this time round,” he told his commanding officer after the drill. He added that the joint training had been a success overall.

“Our engineers were able to teach [SANDF] troops how to form a  nine line, which is a procedure you go through when identifying an unexploded IED, then we integrated squads and went through the lanes, so it was a great learning experience and we definitely made friendships we’ll sustain after going home,” he said.

Officially, the United States’ armed forces don’t have all that much to do with Africa. The US Africa Command is not even based in Africa, operating instead from Stuttgart, Germany. And, with the exception of a few training missions, there are no official US deployments in Africa.

Unofficially, it’s a different story, according to investigative journalist Nick Turse. He has carefully documented a network of tiny US military bases spread throughout the continent: 36 bases in 24 countries, with more likely on the way. This has been accompanied by a surge in special forces activity.

“In 2006, just 1% of all US commandos deployed overseas were in Africa. In 2010, it was 3%. By 2016, that number had jumped to more than 17%. In fact, according to data supplied by US Special Operations Command, there are now more special operations personnel devoted to Africa than anywhere except the Middle East — 1 700 people spread out across 20 countries dedicated to assisting the US military’s African partners in their fight against terrorism and extremism,” Turse reported for online Vice News in May.

The US military’s interest in Africa is primarily related to counterterrorism concerns. “Today, transregional violent extremist organisations constitute the most direct security threat to the United States,” said General Thomas Waldhauser, speaking to the US Senate in March. “To address this threat, our military strategy articulates a long-term, regionally focused approach for a safe and stable Africa.

“Specifically, the strategy outlines an Africa in which regional organisations and states are willing and capable partners, addressing African security challenges, all while promoting US interests.”

Last month, one of the US’s secretive missions made headlines for all the wrong reasons. A report from Amnesty International revealed that suspected Boko Haram militants were being tortured and detained by Cameroonian special forces, without any due process. Most incidents occurred at the Salak air base — within hearing distance of a barracks set for up to 300 US soldiers.

“We can’t be 100% sure that Americans were aware of the torture, but our evidence demonstrates that at Salak these practices occur in places that are accessible and can be visible to US and other foreign personnel,” said Ilaria Allegrozzi, Amnesty International’s researcher on the report, titled Cameroon’s Secret Torture Chambers.

Architect and former general admit to graft at 1 Military Hospital