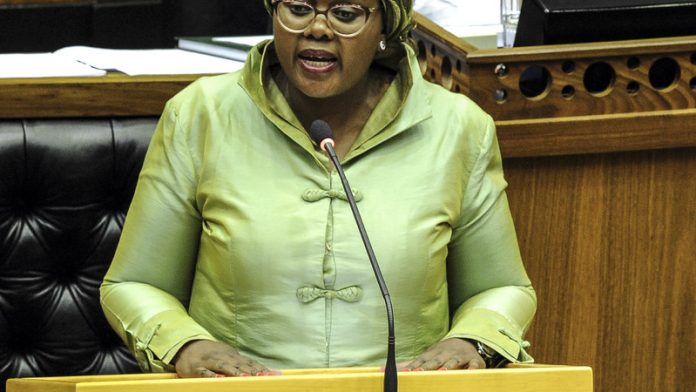 Minister of Energy Mmamoloko Kubayi is backtracking on the investigation into the sale of the country’s oil reserves, say highly placed sources. But the minister has denied this outright.

In May, Kubayi announced in Parliament that she would investigate the controversial sale by the Strategic Fuel Fund (SFF) of 10-million barrels of the country’s fuel reserve for a fraction of the market price. For months Kubayi spoke about the investigation and the possibility of criminal charges against those who are implicated.

Yet sources say Kubayi announced at a meeting that the investigation into the irregularities and corruption that occurred during the sale of the reserves would be put on ice.

Tuesday’s meeting — with officials from the department, the Central Energy Fund (CEF) and the SFF — was to discuss the minister’s new plan for restitution, which included the traders handing over the oil and the state paying back the money — at the price they paid.

Her about-turn shocked the meeting, with a highly placed source saying Kubayi made a unilateral decision that could destroy the CEF and the SFF. She raised concerns about the analysis done by KPMG, which had been appointed to review the financial implications of the sale. “She is talking about the KPMG report and its validity as if it’s the only source of the allegations and financial implications. Yet there is evidence of wrongdoing by officials who are still with the department and those who have left.”

The source said it doesn’t matter what Kubayi decides to do with the buyers of the stock; the most important thing is the investigation into those implicated.

But, in a response to questions by the Mail & Guardian, the minister said the allegation was incorrect. “There is no cancellation of the investigation.” Asked how far the investigation is, she said she would welcome any information “pointing to any wrongdoing on the part of government officials, including employees of any of its entities”.

According to Bloomberg, Kubayi said she wants assurances from the CEF about the report after KPMG’s corruption scandal became news.

But the legal opinions, which the M&G has seen, warn that the department and CEF must first speak to the buyers and ask the court to declare the contracts void before embarking on any plan. According to attendees, the minister has not done this.

“SFF should initiate an urgent and meaningful process with the buyers for purposes of assessing the extent of the SFF’s liability in the event of restitution. It is extremely important that there should be an urgent legal and financial analysis of the full extent of SFF’s exposure,” reads the legal opinion.

Another source at the meeting said it was “not that simple” to give the money back to the traders so they would return the oil.

“The traders have probably resold the stock and it now belongs to someone else. If we go after the traders by trying to force them to give back the oil, we could be suing the wrong people and we don’t know the SFF’s level of financial exposure. This could mean a complete financial meltdown of all the energy entities,” said the source.

Sources close to the minister say she was to have announced her new plan and dropping the investigation at a press conference on Wednesday, but the briefing was cancelled “due to unforeseen circumstances”.

The minister said she would “take the public into confidence once other processes have been concluded”. She was not in a position to discuss a course of action at present, she said.

Shell’s seismic survey will cause ‘irreparable harm’ to sea life, including migrating whales along the Wild Coast in December