Some men stare pointedly at their feet. They sit in silence, their shoulders stiff despite the warmth of the Saturday morning sun. Others crack jokes and talk too loudly.

They are the new ones, explains Joseph Moses, and are nervous. Moses knows how they feel. For a long time he was also afraid to come to the run-down building with the broken windows, he admits. Especially on Tuesdays, when health outreach workers draw women and children to the disused agricultural office and he fears he would be laughed at.

“It’s awkward to come on a Tuesday. One feels out of place,” he explains.

But now he talks quietly to the other men, easing their fears. And when loud honks signal the arrival of a four-wheel-drive vehicle in Mwanakhu village, on the green plains of Mulanje district in southeastern Malawi, on this Saturday morning, Moses rushes to greet the medical team from Blantyre, the country’s second-biggest city

Achy from the very early and bumpy two-hour drive, the clinical officer and two nurses quickly set up clinic in the building, partitioning the space off with old curtains to create consulting rooms, a laboratory and a pharmacy. Sixty-odd men are already waiting and up to 200 can come today.

Most wait to be tested for HIV and counselled or, in the case of Moses and the other regulars, for check-ups and to make sure they are keeping to their antiretroviral treatment.

The numbers of men attending the clinic are unusually high, explains Mphatso Phiri, the clinical officer. “Initially only six men — at most — would turn up,” he says. 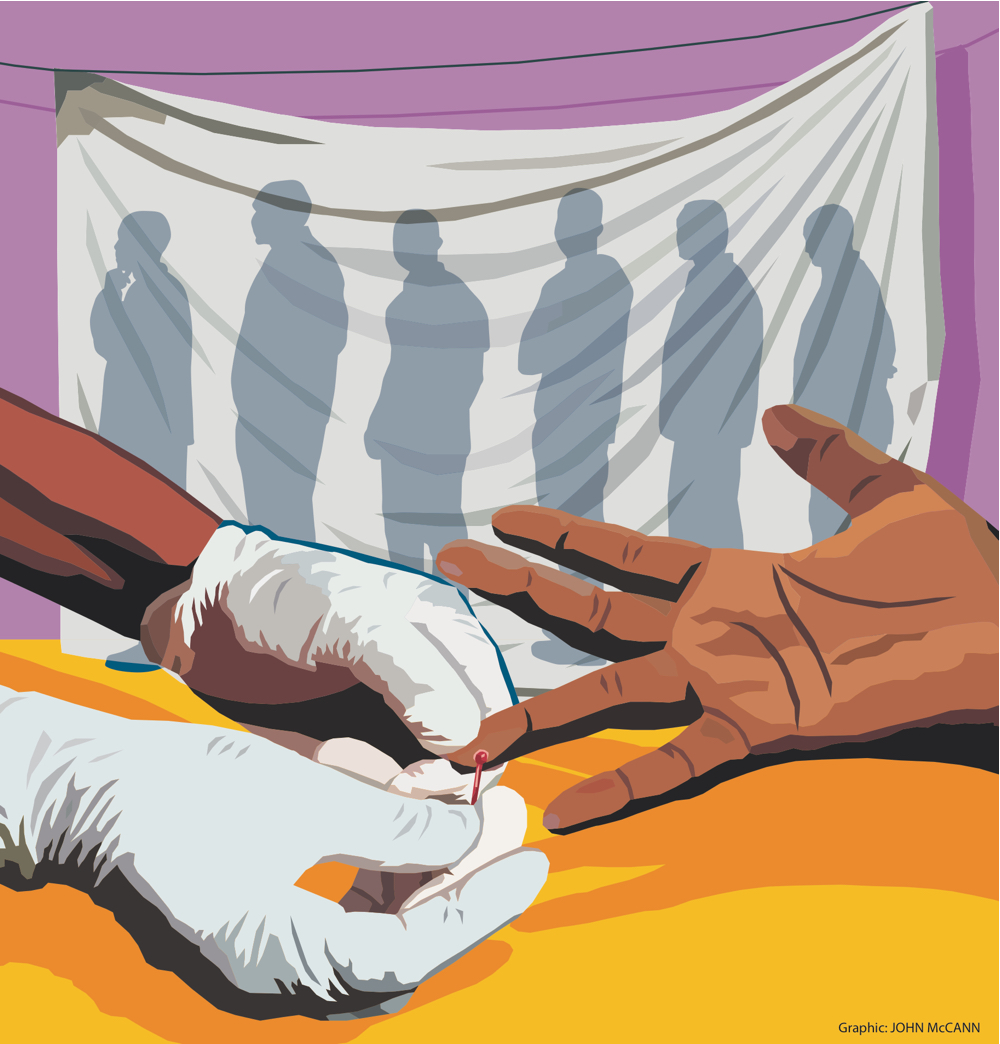 In Malawi, as in many other countries, men test for HIV at far lower rates than women. Only 17% of the country’s women have never been tested for HIV, according to the Malawi Demographic and Health Survey of 2015-2016.

This means that men are more likely to remain undiagnosed, says Joyce Jere, national director of the American non-profit organisation Global Aids Interfaith Alliance (Gaia) in Malawi. “[They] suffer more advanced stages of the disease, unknowingly transmit the infection, and experience a greater burden of Aids-related deaths and illnesses.”

In East and Southern Africa, more than half (54%) of people dying of Aids-related illnesses are men and boys, although they represent only 46% of those infected with HIV in the region, according to Unaids’ 2017 Global Aids update. And this trend isn’t confined to the region.

The report shows that, globally, in 2016, 60% of women of 15 years or older living with HIV were on treatment, whereas this was true for only 47% of men. As a result, 27% fewer women and girls had HIV-related illnesses than men and boys.

In Malawi even when clinics are easy to reach — which is unusual in a country where data shows the majority of people are poor, depend on subsistence farming and live in rural areas — many men tend to stay away.

Mulanje is no exception, despite having the highest HIV prevalence rate in Malawi. One in five people surveyed here are living with the virus, according to the Demographic and Health Survey.

Mobile clinics, such as the one visiting Mwanakhu, have changed healthcare in the past decade. In 2008 the Elizabeth Taylor Aids Foundation (Etaf), together with Gaia and the district health office in Mulanje, started the project with two four-wheel drive vehicles, driving medical teams to rotating sites such as churches or community buildings.

The teams, which have since grown to seven, arrive at a specific site on a specific day and offer family planning services, as well as care for conditions such as malaria and pneumonia. When they test for HIV and tuberculosis (TB), they arrange follow-up care at district clinics.

The mobile clinics conduct more than 200 000 consultations each year, putting about 1-million Malawians within an hour’s walk of healthcare, according to information on the Gaia website.

Women, eager to get care for their children and who have to attend for antenatal and under-five visits, have flocked to the clinics, says Phiri.

And that got the researchers at Etaf thinking that women could help to get the men to the clinics.

“Women have acted as our message carriers to their husbands,” Phiri explains. “Women have played an important role and we have made tremendous progress on getting men to test and starting them on treatment.”

Village chiefs, many deeply concerned about the effect of HIV on their communities, have pledged their support to the mobile clinics. The men who did come to the clinic have also become ambassadors.

Check out how Malawi is changing the HIV self-testing game

When Kennedy Kasela fell ill while working in South Africa, his relatives in Mwanukhu village were convinced he had been bewitched.

“There were allegations that some people were jealous that I was going to make lots of money,” he says. But when he became too ill to work, he returned to Malawi where he eventually — and reluctantly — got tested for HIV and TB at the mobile clinic. He was positive on both counts.

“I was immediately put on treatment and they have made sure I take my medicine and eat properly.”

Now Kasela is a volunteer, convincing men in the village to seek care earlier than he did and trying to dispel myths about testing.

But many men here work long hours on the nearby tea plantations and, with jobs scarce, can’t afford to take time off.

Says Phiri: “We considered that, in most households, men are breadwinners and couldn’t make it to this place during the week.”

Three years ago a new idea was piloted: men’s health days, held on Saturdays when they are not at work.

This has been so successful — Etaf states on its website the men’s health days have increased HIV testing by the mobile clinics by 92% — that there is now a men’s clinic every Saturday. Although they are mostly attended by men, couples can also come on these days.

Moses says the camaraderie among the men during the short but agonising waits for test results prevented him from leaving.

The good thing is I was not the only one who came for testing. There were many of us and we kept talking about the benefits of knowing one’s status. The time went by so fast,” says Moses — who got his results within an hour and was put on antiretroviral treatment within a week.

Last year the US President’s Emergency Plan for Aids Relief announced a $4-million partnership with Etaf to reach more men with HIV prevention and treatment services in Malawi. In addition to the men’s clinics, the programme will focus on door-to-door testing.

Moses says it will help other men who fear the stigma and being mocked. “It was a relief to know and to tell the other men. Nobody laughed at me.”