There’s a scene in the first episode of She’s Gotta Have It — the 10-episode remake of the original Spike Lee film — in which Mars Blackmon, having been allowed into Nola Darling’s Fort Greene brownstone for the first time, gawks at an unfinished portrait of Malcolm X.

She tells Mars that she and Malcolm share a birthday, May 19.

The scene serves as a reminder of the time that has passed between the 1986 film, Lee’s directorial debut, and now. The lovers discuss Denzel Washington’s portrayal of Malcolm X in the 1992 Lee-directed biopic and the actor being robbed of the Academy Award. “He was too black, too strong,” Nola says with an air of cultured confidence.

The portrait of Malcolm X looks back at the viewer throughout Nola’s new storyline, reflected at different points in a mirror that stands next to what she calls her “loving bed”.

The scene is ripped from the original and Mars, now played by Anthony Ramos, jarringly wears the exact same outfit as Lee did when he played Nola’s audacious courter. Though all these markers of the original exist — seducing you into the nostalgia that a remake like this hangs on — the art is recognisably changed.

It may seem like an unimportant detail in the precoital dance, but it’s kind of a big deal. Nola Darling is, after all, an artist.

The portrait in this new iteration, like most of this Nola’s work, is obsessive in its realism. But, on the wall of Nola’s 1986 apartment hangs an image of Malcolm X that is abstract and exaggerated, laid over with newspaper clippings.

Although it is made clear that 1986 Nola is an artist, her work isn’t exactly vital to her story.

For Nola today, played by the inimitable Dewanda Wise, her art is everything. It’s a fact that pulls her narrative beyond the plot of the love quadrangle — between her, Mars, Jamie Overstreet and Greer Childs — giving it the length and breadth it needs to sustain through this more protracted form.

But Nola isn’t as comfortably ensconced in the New York art scene as she might seem.

As viewers we watch her trade art for therapy and hustle to make rent in a borough that just isn’t for a carefree Nola anymore. She seemingly relies on the little she makes as an art teacher to preteens and from the art Jamie buys from her when she’s in a financial bind.

The promise of a prestigious arts grant, the Catlett prize, urges the storyline on. Named after the black feminist printmaker and sculptor, Elizabeth Catlett, the expectation that the prize represents bears down on an artistic tradition that Nola is desperately clawing at. Catlett’s work, political and abstract — informed by the Harlem Renaissance and the Black Arts Movement — is markedly different from the slick portraiture that Nola hangs her hat on.

In a later episode, Nola’s work, titled The Free Female Black Form, seems shrunken on the walls of Clorinda Bradford’s gallery next to the work of her contemporaries.

The exhibition is supposed to represent, as Clorinda — played by Margot Bingham — puts it, “a movement of forward-thinking Afrocentric artists — reaching across boundaries to fabulate, deconstruct, redefine, assert and expand the breadth and reach of the millennial voice of the people of the African diaspora”.

Though it’s clear that Lee isn’t totally serious about this depiction of the art world, an art critic’s appraisal of Nola’s work — as overshadowed by the “electrifying political perspectives of her peers” — doesn’t seem like too harsh a judgment. On Nola’s title for her selection, the critic appropriately asks, “How can one encapsulate the free female black form?” 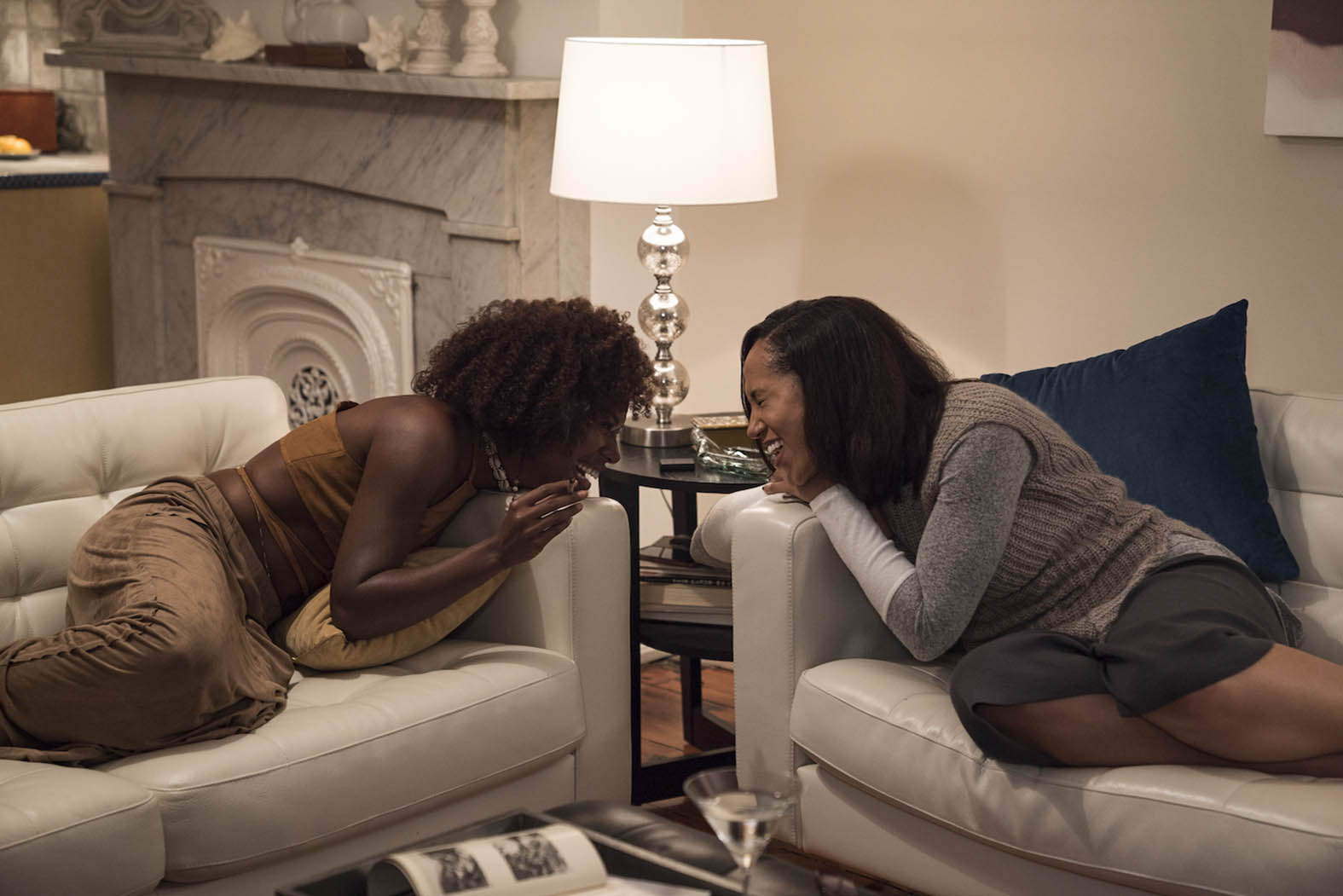 [The friends, Nola and Clorinda Bradford, after their fallout over Mars (David Lee)]

The scene in which Shemekka, played by Chyna Layne, poses for a painting Nola is working on for the Catlett Prize, betrays something in Nola that should make the viewer uncomfortable.

In the scheme of the narrative, Shemekka represents an other — supposedly less liberated — image of black womanhood that She’s Gotta Have It unrelentingly pokes fun at.

She is a single mother, working at a gentlemen’s club, who is obsessed with realising her Nicki Minaj booty goals to the point of farce. The plotline drags the didactic elements of Lee’s storytelling into the prickly sanctimoniousness that the director has been criticised for.

Nola and Shemekka have a spat over the painting because the artist hasn’t created the illusion of a bigger ass that the model desires. “I posed for you, that’s the least you could do,” Shemekka pouts.

“The least I could do is paint something realistic,” Nola responds, punctuating the word “re-a-lis-tic” with her paintbrush over the unfinished painting.

Nola brushes off Shemekka’s desires while at the same time insisting on her own ability to transcend these totally human feelings of body-consciousness.

Shemekka’s only remaining condition is that Nola paint in a long silky weave, which at the moment she can’t afford. At the end of the episode, Nola bestows on the image of Shemekka an Afro instead, while preaching to the viewer about the urgency of freeing the black female form.

Nola’s role as an artist gives her the power to mark out a “purified” figure of black womanhood, imagined by her to be now rescued from the corrupting force of masculinity.

The original Nola was imagined as a foil to heteronormative male sexuality. She would juggle three men and, like a man, she would have little interest in committing to any one of them. “It’s really about control, my body, my mind. Who was going to own it? Them? Or me? I’m not a one-man woman,” she proclaims. 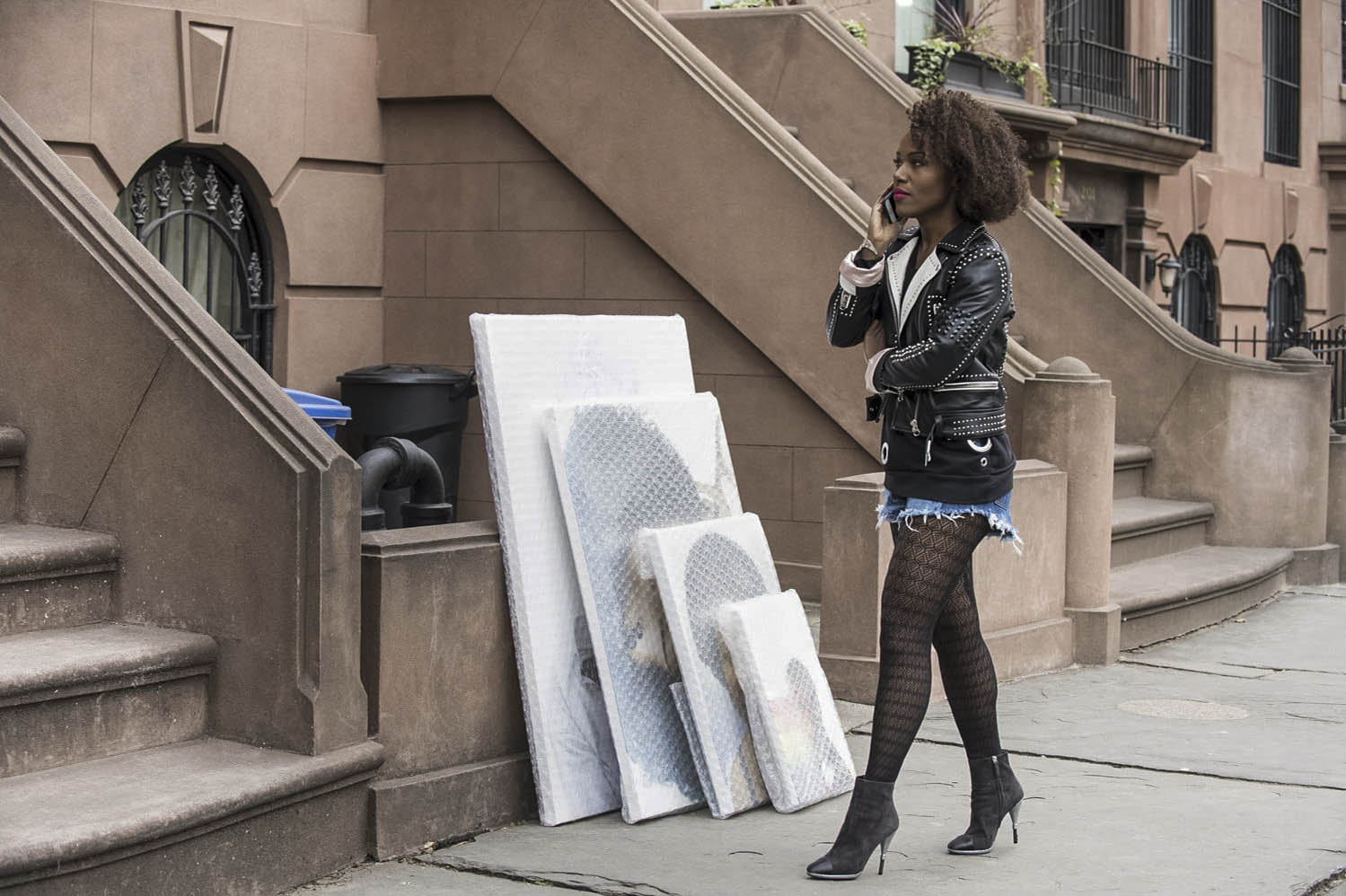 [Street art: Nola waits for Mars to pick up her paintings for the Diastopia groups show at Clorinda’s Gallery (David Lee)]

Each man makes their move to contain her sexuality and get her to drop the other two fools, all the while subtly diagnosing her as a sex fiend. Nola flounders against the sexism that makes its way into her loving bed — knowing full well that even her dressed body is being constantly surveilled.

Above all, She’s Gotta Have It has always been about the gaze — who has the power to wield it and how they use it to endow others with meaning. In a sense, the whole concept of the film is contingent on subverting the condition, as Laura Mulvey put it in her essay Visual Pleasure and Narrative Cinema, of the woman whose “desire is subjugated to her image … as bearer, not maker, of meaning.”

Nola’s desire to be carefree is constantly circumscribed by a male gaze that insists that her sexual liberation makes her a freak. After being assaulted, the artist reclaims the street — adorning it with black-and-white images of women wearing proclamations of self-definition in red; “My name isn’t Can I talk to you for a second?’’, “My name isn’t You should smile more’’, “My name sure ain’t no black bitch”, read posters with Nola’s and other women’s faces on them.

This different dimension to Nola’s art is borrowed from real-life artist Tatyana Fazlalizadeh’s 2012 Stop Telling Women to Smile campaign. Fazlalizadeh worked with Lee on the film and, if you don’t blink, she appears in a scene with Clorinda in the second to last episode.

Nola leans on Mars to protect her secret identity as the artist behind the stirring images. “It came out of my assault. That’s not who I am,” she later says to Clorinda.

Street art has always been a key aesthetic element in Lee’s work and here we have Nola furiously trying to avoid being called a street artist. Nola’s fear of being seen as standing outside of the sanctified spaces of the art world — a world that we see her visibly squirm in — discloses the character’s anxiety about slipping into the wretched class of the artist on the street.

Elvis Molasco’s character, Papo da Mayor, represents this fear. The fellow artist and Nola’s former classmate lives on her neighbour’s landing and follows the protagonist around like gentrification’s spectre.

It’s not clear whether Lee is also making fun of Nola, another archetype for the director to satirise. The character is, after all, perennially unlikeable and maybe that’s the point — to present a flawed black woman, struggling against fetishisation and so avoiding the meaning that redemption might represent.

Of the original, bell hooks wrote: “Men do not have to objectify Nola’s sexuality because she objectifies it. In so doing, her character becomes the projection of a stereotypical sexist notion of a sexually assertive woman — she is in fact not liberated.”

Lee and his fellow writers, four of whom are women — Radha Blank, Eisa Davis, Joie Lee and Lynn Nottage — seem intent on undoing this tethering of Nola’s identity to masculine subjectivity by making her voice, however hollowly, a political consciousness.

At the beginning of the closing scene, the lead sits in her loving bed. Through the elaborate headboard the finished painting of Malcolm X is illuminated for the viewer, an arresting backdrop. The mirror alongside reflects back to the viewer a self-portrait by one Nola Darling.

She delivers her final monologue, addressing the viewer’s critical gaze: “Whatever you feel about my own personal truths, that’s on you.”