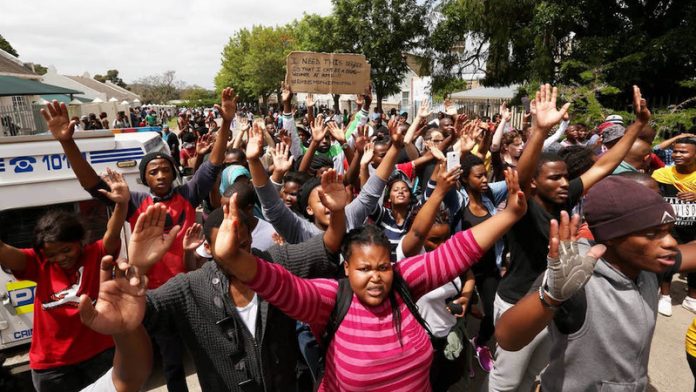 The decision to expel two anti-rape protesters from Rhodes University was made in the absence of one of the students and without hearing her side of the story after her postponement application was refused, documents from the disciplinary process reveal.

On the night of April 17 2016, a group of students banged on the doors of male residences in search of the men named on the #RUReferenceList — a list of men alleged to be rapists or sexual assaulters. Three men were forced from their rooms and were held by the group. Two escaped, but one was kept until the next day.

Yolanda Dyantyi, Dominique McFall and another student, Naledi Mashishi, were charged by the university for contravening the student disciplinary code, kidnapping and insubordination, and faced internal disciplinary action.

Mashishi deregistered from Rhodes before the judgment was made, but Dyantyi and McFall were found guilty of kidnapping and insubordination. Dyantyi was also found guilty of assaulting the student who had been held by the group and of defamation for calling another a “rapist” on social media.

According to the internal papers, which the Mail & Guardian has seen, the university drew up a draft order that proposed that the two be permanently expelled and that their academic transcripts be endorsed.

The draft order also stated that neither student would be allowed back on campus and that credits obtained at other institutions during the expulsion would not count towards their degrees from Rhodes. Both were due to graduate with bachelor of arts degrees in 2017 after three years of studies.

“It is unlikely that either of the students will return to the university after this academic year. In the absence of an endorsement, they will be able to rely on their untainted transcripts at different institutions or for any other purpose. Such a result would render this entire disciplinary process a wasted exercise. In these circumstances, we submit that it is imperative for the transcripts of the students to be endorsed to read ‘conduct unsatisfactory’ in the manner expressed in the draft order,” the university argued.

A few months earlier, in May, the university had resolved that a student found guilty of rape should be expelled for 10 years. When news of the permanent expulsion of the anti-rape activists broke earlier this week, a public outcry followed, comparing the severity of the two punishments in relation to the transgressions committed.

The saga has become known as #RhodesWar on social media. Views on the issue are polarised: some say the two female students deserve their lifetime suspension from Rhodes; others question the severity of sanctions meted out to perpetrators of sexual violence.

In separate cases, two other students have been permanently expelled for rape, the university said in a statement.

Almost all the evidence before the panel, chaired by advocate Wayne Hutchinson, agreed that Dyantyi was a student leader in the group. She was accused of calling one of the men on the list a “rapist” and spitting in his face. He testified that he had been pushed, kicked and hit by people in the group. He was held for at least 11 hours until police arrived. The National Prosecuting Authority later informed him that it had declined to prosecute him on charges of sexual assault.

But Hutchinson ruled on Dyantyi’s fate, without having heard her evidence and in her absence.

The hearing adjourned on October 11, and dates were discussed for when it should reconvene. Lawyers at the Socioeconomic Rights Institution (Seri), representing Dyantyi, said two of its counsel would be unable to proceed until November or December, a time that coincided with the university preparing to close for the year.

The university says that it instead offered to resume the hearing over weekends, but that Dyantyi’s legal team declined — “without any reasonable explanation”.

It was expected that the hearing would resume on October 26 and that between then and November, Dyantyi’s team would be given an opportunity to present their evidence.

Seri said it had, on October 20, asked for a postponement — because two members of the team would not be available and because Dyantyi was due to write exams while the hearing was under way.

The university told the M&G, however, that Dyantyi was “frequently absent” during the hearing without having obtained permission from the proctor.

Eventually Rhodes laid a complaint about her absenteeism, and Dyantyi was then instructed by Hutchinson to attend unless she applied for permission not to attend.

The university also argued that, because Dyantyi had four people in her legal team, the other two members could be made available to attend the hearings with her if the others were unavailable.

“We know of no reason why the remaining two members of the team and Ms Dyantyi herself did not attend the hearing. It was clearly because no such reason existed,” said the university in response to questions from the M&G.

Seri said that Dyantyi should be allowed a postponement because she was receiving pro bono legal help, and finding new lawyers to come in at this late stage would put her at a disadvantage.

The postponement was dismissed. When her team didn’t appear at the hearing on October 26, Hutchinson found they had “waived their right to further participation”.

“In light of the fact that Ms Dyantyi elected not to participate in the proceedings, I must accept the uncontested evidence of the university’s witnesses, unless it is inherently improbable,” Hutchinson said in his ruling.

Hutchinson told the M&G on Thursday he could not comment on the case because of his position as proctor.

Unlike Dyantyi, McFall was there for the hearing. During the proceedings, the university argued that McFall should receive the same sanction as Dyantyi because she had “openly challenged” the vice-chancellor, and the university could not “reasonably expect” to continue having a relationship with her.

Rhodes representatives also argued that McFall had “hurled abusive remarks” at the “victims” of the group. She was also, along with Dyantyi, accused by the university of leading “horrific acts” against one of the students on the list during the ordeal, including helping the group to keep him “hostage”.

She brought five witnesses to testify. One of them was Nicole Donalds, a philosophy lecturer, whom McFall had called out of concern when she saw the activity at the residences. McFall said she had been troubled by the group’s treatment of the student.

“He was being jostled to the end of the garden and someone hit him over the head with an empty plastic water bottle. She was disturbed by the incident and felt very scared for his safety. A violent campaign could not be condoned,” Hutchinson recounted McFall’s evidence in papers.

McFall’s team also launched an internal appeal against the sanction, but it was denied after a confusion about deadlines. Another appeal is set to be launched and, if that fails, McFall said she would approach the courts.

“We will do whatever it takes to have the expulsion overturned,” she told the M&G.

In its argument, Rhodes said the two students showed no remorse for their actions during the disciplinary proceedings. A Facebook comment made by McFall on April 17 showed she had doubts, however.

“Also not happy with the situation at all. We want the university to take him away and handle it internally but [vice-chancellor Dr Sizwe] Mabizela said no,” McFall wrote on Facebook in response to concerns raised by another student.  On April 18, McFall accompanied the student who had accused one of the students on the list of alleged sexual offenders to the police station so that she could open a case. McFall said that she had found out that morning about the allegation. She also did not know, she said, that  he was still being held by the students.

McFall was a member of Chapter 2.12, an organisation that lobbies against gender-based violence at Rhodes. She argued that she had come to the residences once she heard there was a meeting because she feared the #RUReferenceList would be attributed to Chapter 2.12.

She became involved in events the next morning, however, reading out a list of demands that had been drawn up by the group. It was then handed over to Mabizela, who had tried to persuade students to release the male student.

Hutchinson, however, dismissed McFall’s argument, saying that her claim of concern for the student who was held by the group was “patently false” and that because she had assisted a female student who had accused him of rape, it would “follow that she would be hostile to [him]”.

He also believed the male student’s version that McFall’s partner at the time, who testified at the hearings, was holding her hand on that morning. McFall said that she would not hold her partner’s hand in public because, as an openly gay student, she feared that public displays of affection would provoke discrimination. But Hutchinson found this to be unlikely.

“Ms McFall claimed that they did not hold hands in public because of the prejudice that certain people harboured. For a person to openly admit the relationship but to attempt to deny it in public is a contradiction and most unconvincing, especially in light of her activist role on gender rights.

“If anything, it was designed to shy away from [the student’s] incisive observations,” he said.

Nomzamo Zondo, Seri’s director of litigation, said that they would be filing court papers in January next year to challenge the sanctions and the findings.

Rhodes University has defended its sanctions on the two female students, saying they were expelled for violating the common law and not for protesting.