When the preternaturally gifted Nigerian symbolist poet Harry Garuba burst on to the literary scene in the late 1970s and early 1980s, few would have envisaged, then as now, that it would take a lifetime for this once-precocious talent to be triumphantly reunited with his creative muse.

Born in Akure, southwestern Nigeria, in 1958, at age 17, Garuba gained admission to the department of English at the University of Ibadan. The budding young scholar drew on his academic and intellectual formation at Ibadan to graduate with a BA honours and later with a master’s degree.

From there he obtained his PhD in 1988 and composed a work of scholarship, Mask and Meaning in Black Drama: Africa and the Diaspora, illustrating his groundbreaking thesis on genre and technique in African, Afro-Caribbean and African-American drama with a comparative study of the plays of Nigeria’s Wole Soyinka, St Lucian Derek Walcott and the American Amiri Baraka.

Ibadan, Nigeria’s premier university, offered the creative space within which his talent could flourish. Garuba was still a teenager when his one-act play, Pantomime for Saint Apartheid’s Day, appeared in the Festac Anthology of Nigerian New Writing (1977), compiled on the occasion of the 2nd World Black and African Festival of Arts and Culture, which took place in Lagos, Nigeria, from January 15 to February 12 1977.

But that was child’s play compared with what he achieved five years later. In 1982, New Horn Press, the Ibadan-based publishing house built by the late, great Nigerian literary scholar Professor F Abiola Irele, brought out Garuba’s first volume of poetry, Shadow and Dream and Other Poems, when the poet was only 24. It’s a relatively slim book but contains some of the greatest and most original poetry ever written. The first poem in Garuba’s distinguished debut comprises perhaps the most memorable opening lines in modern Nigerian poetry in English since The Passage in Christopher Okigbo’s debut Heavensgate (1962) published by Mbari, another Ibadan-based house, 20 years earlier:

I shall stand here alone

Through this long blighted night

I will neither sing nor

Dance but listening to

The murmur of the

Ebbing waters I shall

Weave my little web of

Dreams beneath the shadows

Cast by these dead iroko trees.

In this introductory nine-line lyric, Garuba deploys enjambment and evocative imagery to underline the nature and scope of his creative credo — the fluidity of his vision, the freedom of his artistic expression.

But only 35 years later does he weave another web of dreams! Animist Chants and Memorials, published last year by Kraft Books, yet another Ibadan-based house, is Garuba’s long-awaited second collection of poetry. Here, the lush cadences of Shadow and Dream give way to a stripped-down lyricism, initiating a subtle shift in style as much as in sensibility.

The new collection is divided into three parts — Past-Unto-Present, Chants, Spells and Memorials, and Past Present — which incorporate personal reflections, historical paradoxes, dialogues with or elegies for fellow writers, such as novelist Chinua Achebe.

In the book’s prelude, Garuba explains the collection’s title: “animist chant —/ a chant that wakens/ the souls of things/ animate and inanimate/ a spell that rouses the spirit/ that lives in bone and stone”.

The poet’s recurring motifs of animism, chants, memorials and spells may recall the title of a poem Animystic Spells from Soyinka’s collection A Shuttle in the Crypt (1972), even if the older writer exploits pun and poetic licence to spell the first word of that poem’s title unconventionally.

Nevertheless, in Garuba’s poetry, there is little of the ritualised myth-making for which Soyinka and Okigbo are renowned, although Garuba shares with them an affinity with modernism. From Soyinka, though, Garuba does learn something about structuring a collection of poetry. The last of the four sections of Shadow and Dream — Four Folk Figures — evokes Four Archetypes, the second section of Soyinka’s A Shuttle in the Crypt, although the title of Garuba’s first volume echoes that of Shadow and Act (1964), a collection of essays by Ralph Ellison, the American novelist best known for Invisible Man (1952).

Naming Day and No Names Survive, the first and last poems in Animist Chants and Memorials, are bookends exploring the ambiguity of naming and memory. Leaving Home at 10 is autobiographical in recalling the poet’s tearful rite of passage — “the departing son leaving the embrace of home and hearth” — as his father drives him to Government College, Ughelli, in midwestern Nigeria to begin his secondary education as a boarder in 1968.

In Running Poem Garuba, almost inevitably, tackles his 35-year silence head-on, recalling the struggle to find inspiration “on windy winter mornings” or “in the season of rains” and the final rediscovery of poetry, ready and waiting to take flight:

I kept running, running away from

from lines, verses, and songs, closing

until, this midnight hour, in a clasp

through a burst of fireflies, a verse

stabbed me in the gut,

piercing through flesh and marrow

and the blood flowed in lines,

in verses, in songs

running away from me …

The allusion to “a burst of fireflies” anticipates Death of a Poem (For Sesan), Garuba’s exquisite elegy for his friend, fellow poet and former student Sesan Ajayi (1959-94), author of a solitary volume of poetry, A Burst of Fireflies, published by Kraft Books in 1991:

there is a lie in every line that rhymes

a line in every rhyme that lies

to tell the tale of a boy who loved

so much he could not take the warts

that punctured the rhyming lyrics of

the flow of the river and the grace of

he couldn’t take it here

and one cloudless day

his spirit soared above the skies

leaving behind the lies in the rhymes

This dull, dull craft of words

Can it capture the dark delight of his

With its masterly alternation of stressed and unstressed syllables; its judicious use of alliteration and assonance, metonymy and synecdoche; the lucidity of its language and the luminosity of its vision; the affect of its sensuous appeal and symbolist strategy, the poetry of Harry Garuba is a wonder to savour.

Unnumbered mourns the anonymous dead learnt about in a newspaper report, and in Cryptic Chants: A Slave Memorial, a superb seven-part poem about slavery, the poet concludes that “meaning is all I seek tonight, the resurrection of love/ in an ageless memorial for all the restless dead”.

Garuba engages with the latter poet in A Young Boy in a Dry Season (after TS Eliot), which contains this italicised epigraph adapted from Eliot’s dramatic monologue Gerontion:

a young boy in a dry season

being chanted to by an old man

This evocative poem about the harmattan season in Benin, the major city of Nigeria’s midwest, celebrates youth and vitality, and only a poet with a keen sense of metaphor could perceive charcoal as “the black legacy of fire”.

My Body Sings evokes decay and decrepitude as the poet deploys alliteration and extended metaphor to register the merciless, relentless process of ageing or old age, lamenting that “my body sings now only in lower case”:

i grow old, one ache after the other,

of time congregate in the house posts

the territory of my body,

looting its temples, stealing the staff

of its strength and

rending asunder the ark of the covenant of body and spirit 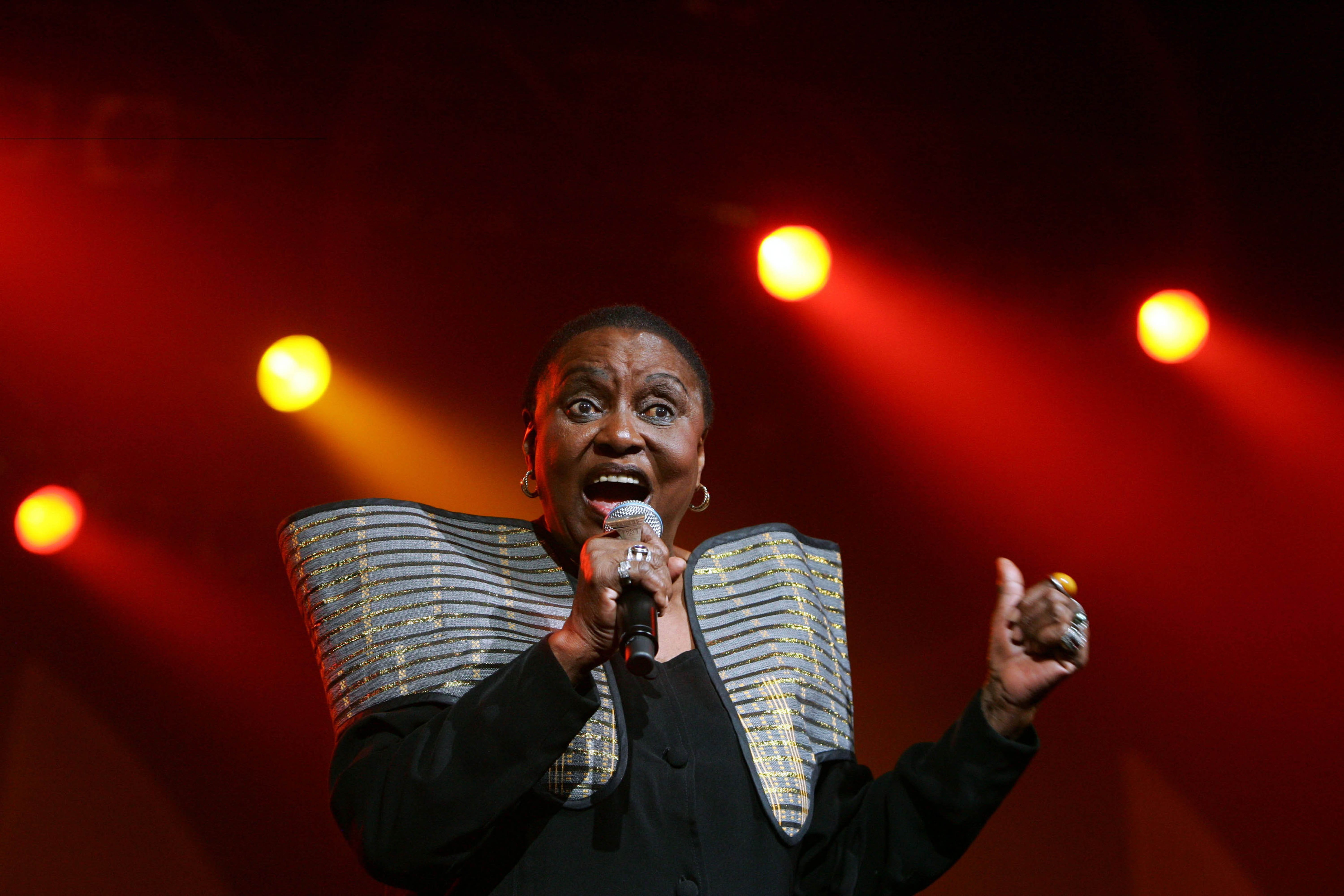 [Miriam Makeba seemingly provided some inspiration in ‘Girl and the Dancing Hoop’, one of the poems in his latest volume: (Mike Hutchings/M&G)]

The five-part poem Girl and the Dancing Hoop, inspired by the poet’s visit to the exhibition From Valongo to Favela: The Imaginary and the Periphery at the Rio Museum of Art, Brazil, where he sees Caeteno Dias’s video 0 Mundode Janiele/Janiele’s World, intersperses an anonymous acknowledgement of the South African singer Miriam Makeba, as the poet wonders:

What more is there to see?

What more stories do these eyes live?

Carrying her country, her continent

All around her aching heart, her

Garuba is a true original and one of the finest poets in English.