There are two ways to get to Hammanskraal if I am travelling in the evening. I could use what I have endearingly come to know as die ou pad or I could take the N1 highway.

The time each route takes is almost identical. Within an hour and a half I will arrive in Temba’s P Block, where my mother grew up, to kiss the cheeks of aunties.

Every driver has their preferred route. If we use the highway, the journey is smooth. Tyres roll over the tar with no effort, the scarcity of cars removes the stop-and-go traffic (which means fewer headaches) and the countless Apollo lights illuminate the ride.

Die ou pad offers an alternative experience, one filled with spontaneous ducking and swerving to avoid potholes and the odd source of light means drivers rely on their eyes to get to where we’re going.

And because die ou pad is known for facilitating collisions, there are popular rumours that ghosts guard the route.

Although I could go on about its liabilities, frequent commuters prefer die ou pad for two reasons: one, it’s what they know and, two, the highway costs money, with toll gates ranging from R23 to R87.

In the same way, there are various pathways to follow South Africa’s discourse on Africans and mysticism. A popular path portrays African mysticism as boloyi, witchcraft — a practice with malicious connotations where users benefit by harming their adversaries and spreading fear. This understanding bears talks of ditaba tsa lefifi, di tokoloshe, go romella motho tladi, go fufa le go tshwarega — news of darkness, tokoloshes, sending lightning to strike someone, flying and being stuck.

Growing up with a mother who was born and raised in Hammanskraal — a part of Pretoria shunned by people from other townships because of its association with witchcraft — this is what I know.

Late night conversations over tea with my mother and aunts need only a small trigger for the sisters to recall and exchange the witchcraft anecdotes they have collected over the years — such as the one that took place at Temba police station where one of my uncles worked.

A man in police custody claimed he had been wrongfully arrested. He tried to plead with the officers with no luck. He then threatened to show them who he really was. No one paid attention to him until he began levitating, David Blaine style, in an attempt to break through the ceiling of the prison cells. According to my mother and aunts, there were forces stronger than his protecting the police station. These caused him to hit his head against the ceiling and collapse on to the cell’s floor. Since then Temba has been dubbed “Ko go wa ha Satan” — “Where Satan fell”.

I carry the other stories like a package of resentment with no clear recipient. Recalling them on paper will not be as humorous because my mother and aunts have used them as comfort for the premature deaths of their parents. “Ke boloyi, they were in good health and had no reason to leave us so young.”

Like die ou pad, this view does not aim to serve the people the ideas are attached to. But we follow it because it’s easier to use and to shun if we do not understand it. Use of the less popular route, like the highway, requires an investment. And while this investment may seem non-serving, it serves us in the end.

This is the route 25-year-old Jonas Lekganyane has taken in his animated series The Adventures of Noko Mashaba. Based in Turfloop, Limpopo, the series follows the foolishly proud but humorous Noko Mashaba’s unusually exciting every day. In every episode, Mashaba has a mokapi, an escort, who will help him solve whatever problem he faces. 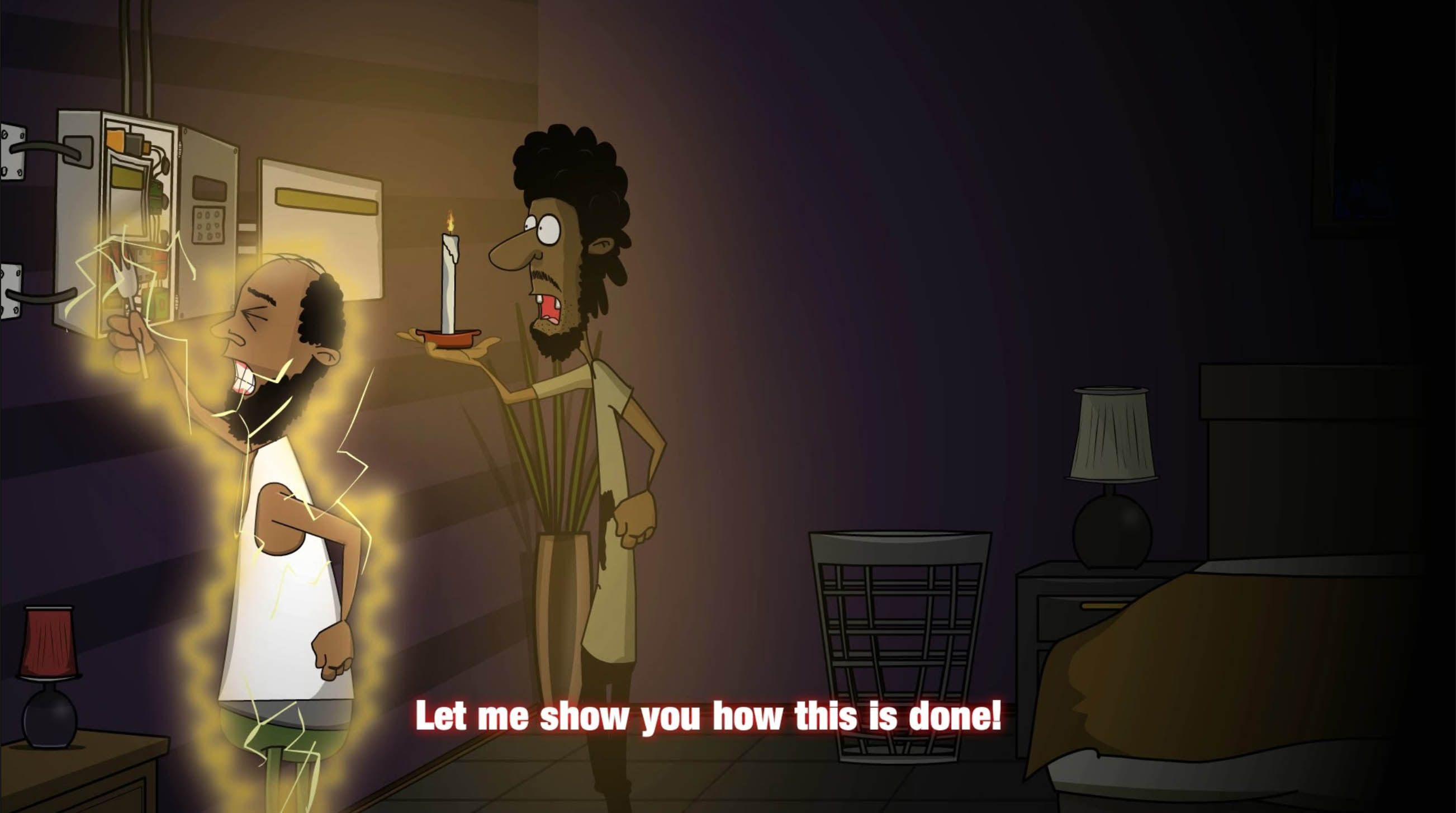 [Viral sensation: In every episode of The Adventures of Noko Mashaba, he has a mokapi or guide to help him navigate his problems]

Lekganyane created this character in an attempt to shift our understanding of the intricacies involved in boloyi. “I mean think about this, witchcraft mo makgoweng ke sorcery. It’s Harry Potter. It’s a good thing. It’s a celebrated thing. If you talk about Harry Potter, people love it but then with us if we’re trying to hide it so much that when it’s brought up it’s negative. I want it to be like bo Harry Potter. I want to say you guys don’t have this sorcery alone, le rona re nale.”

Phusu’s character is a hybrid in that he combines the art of dark sorcery, African spirituality and science — thanks to his triple major in engineering, wizardry and ubungoma — and assists his clients for the good. When asked to explain how he is able to do the supernatural, such as teleporting his clients from point A to B, he is able to explain the process in scientific terms.

“My bones are electronically connected to the ancestors. The atomic bond between the bones and ama-dlozi has an electromagnetic spectrum that is inconspicuous to the human retina.”

Phusu exists in a parallel world that primarily black people have easy access to. This is because the language, concepts and the verbal passing down of the stories keep this world alive.

Lekganyane takes a look at this world and the stereotypes that exist within it and challenges it through satire. And that is why we watch his work.

The series is relatable, hilarious and it gives imaginative explanations about a world that interacts with our everyday lives in ways we don’t necessarily understand but have relatively approximate accounts of.