Sitting on the sidelines of a football practice match feels a lot like being ringside at a sparring session. An amateur shows up pumped, equipped with lofty ambitions of landing a surprise knockout blow to the pro. The established fighter arrives calm and collected, knowing he’s not there to impress but rather to fine-tune, to identify his own weaknesses.

It’s no different for this particular set of players arriving at Balfour Park training ground in northeastern Johannesburg on a sunny Tuesday morning. They’re there as a litmus test for the runaway National First Division leaders —Highlands Park. 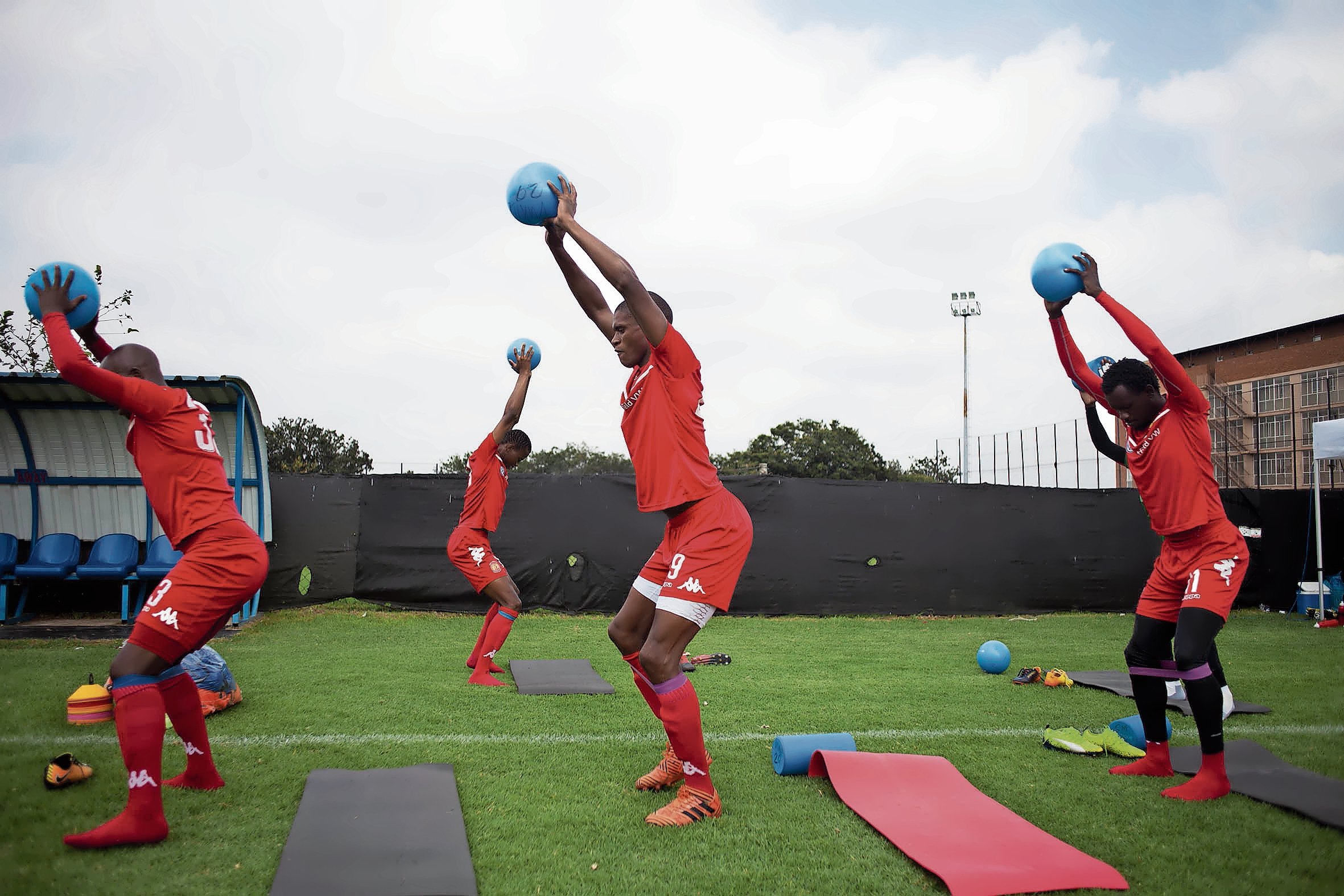 [The Lions of the North take their morning training session at Highlands Park in Johannesburg seriously. (Oupa Nkosi/M&G)]

Anybody who’s played the game, even at school level, would be able to tell the difference in an instant. The first touch, the split-second-faster reaction speed. There are certain attributes that distinguish a professional from the rest of the pack.

The amateurs are ambitious and play hard. The team even grab the first goal in the weird format of three 35-minute segments.

It will all be for nought, ultimately. The Lions of the North stand unfazed, effortlessly dispatching their opponents despite heavy rotation.

Coach Owen da Gama’s team are focused. Their drive is palpable, from the warm-up and the mock game to the way the players carry themselves to the lunch hall after practice. This is a group with a single-minded goal: to reach the Premier Soccer League and stay there.

They’re well on their way. A 4-0 mauling of Jomo Cosmos on Sunday propelled the division leaders to a commanding nine-point lead with nine games remaining.

The club has already been in a league of its own for most of the season. As top scorers with 36 goals, only nine have been shipped the other way. An astounding four of those have come since the man affectionately known as “Rubber Doll” during his playing days was announced as head coach in September. 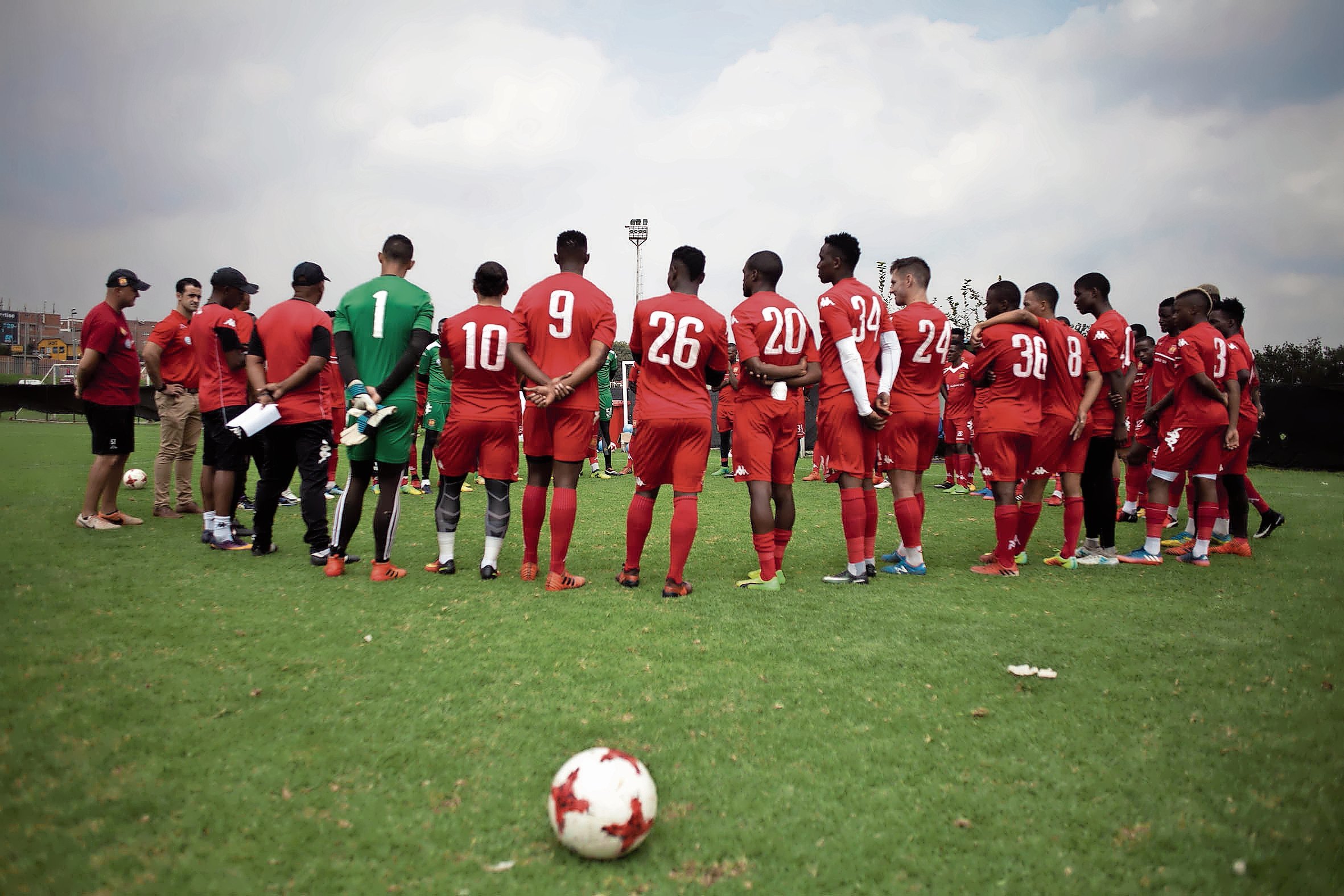 [The footballers and their club have been in a league of their own all season, a testament to their focus and determination. (Oupa Nkosi/M&G)]

His only loss to date came in the Nedbank Cup to Stellenbosch about a week ago. He fielded a far weaker team, seemingly unwilling to budge from the current league path.

Of course, he would never admit that the PSL sits just beyond the horizon. It’s seen as arrogant and unbecoming of a manager to declare victory before the fact. No matter the lurking dead-rubber status.

“We’re not even looking at wrapping up the league or PSL at this stage,” Da Gama says after training.

“It just distracts you from what you want to achieve. Our next game is the focus; we’re focusing on nothing else. We’re not even making plans for the PSL; we’re under no illusion that things can’t turn around very easily. We are very focused, we are very humble and entirely focused on the next game.”

Focus has been a theme of his tenure. When he took the reins, the future of the club was precarious. Still reeling from a swift relegation, the Lions of North are about to learn that the clutches of the National First Division are not easily escaped. It’s a hard lesson that far more established clubs such as Black Leopards and Jomo Cosmos have already learned.

The noises and actions of the club indicate that these teachings have been taken to heart.

Heading into the 2016-2017 season, they were disadvantaged by a short preparation time. Having gained promotion from the playoffs, Highlands had little time to identify targets for a survival bid in the top flight and were caught on the back foot.

This time around, their dominant position has allowed them to cast their eyes further ahead. Despite their top-of-the-league status, the club has brought in a host of January signings.

“We played well but the problem [last season] was that we were not scoring goals,” said star midfielder Mothobi Mvala. “We were unfortunate … as a team we were not compact, we were not together, the team spirit was not the same. That made us get relegated.”

What could they do differently? Mvala suggests they have the answer should they make it to the top flight. “We need to defend well and score the chances that we create. I think now we have people that can score goals, unlike last season, where we had only [Zambian legend Collins] Mbesuma. When he came here, we were depending only on him to score goals. Now we have lots of players that can score goals, we are not depending on one person. I think this season is going to be much, much better. And with the experience of coach Owen, I think that’s going to help us a lot in the PSL.”

Teammate and Namibian international Peter Shalulile agreed that the team must be confident in the game they have played this season if they are to survive in South Africa’s top league.

“We are doing the right things; we are working hard, working together as a team to accomplish the same thing,” he said. “We are an ambitious team. Going to the PSL will be something good, it will be big. We just have to go inside and do the same thing that we have been doing as a team and working together. We will go in with a mind-set of surviving and then take it from there.”

Although Da Gama, a former ‎Amaglug-glug and Orlando Pirates coach, would never admit to entertaining premature thoughts of playing in the PSL, he did provide some interesting insights about his reasons for joining a team in the NFD as well as the long-term goals of the club.

“When it became known that I could possibly be available, there were a few PSL teams that approached me, as well as NFD teams,” he revealed.

“I could have gone elsewhere for much more money … not that I’m not well paid here; I’m well looked after. It was three PSL clubs that offered me a job. But if you look at the history of those clubs, there’s not one coach that’s survived longer than one season. I’m not in this for the short term and to bolt out with money as quickly as possible. It’s all about longevity. It takes about two seasons to really get your claws into a team and to get it where you want it to be.”

Based on Da Gama’s words and the atmosphere around the club, there is an unshakable feeling that there is buy-in from the bottom of the club right to the boardroom.

“Before I could even come here, [technical director and cochairperson] Larry Brookstone made it clear: he wants Highlands Park to win the Champions League. That’s his long-term goal. Immediate goal is obviously to get to the PSL and establish yourself, to be competitive. We don’t want to go up and come down, come up and come down.”

Brookstone had earlier walked briskly through the training ground, presumably hard at work with club business. Da Gama claimed the buy-in from the directors extends far beyond platitudes and gestures.

“It is a very ambitious team,” he said. “The fact that [shareholder, director and cochairperson] Brad Kaftel can come and tell the players after they were relegated that you can keep the same salaries that you earned in the PSL [was significant].

“So we didn’t lose our top players like Mothobi. Mothobi is earning what he could be earning in a PSL team. [Charlton] Mashumba, all of them … they’re earning what they could be in the PSL. So credit must go to management for that.”