The Eastern Cape provincial government has lofty ambitions of turning the province into the breadbasket of the Southern African Development Community region.

Provincial premier Phumulo Masualle said the province — which currently leans on the automotive sector and government as its two biggest employers — should diversify its economy by expanding its agricultural sector.

Masualle was speaking in an event held at the Thobi Kula Indoor Sports Centre, in Mlungisi Location, Komani. It was attended by provincial MEC for rural development and agrarian reform Mlibo Qoboshiyane, as well as commercial farmers, co-operatives, small-scale farmers and subsistence farmers from Komani (formerly Queenstown). The event marked the kick-off of the premier’s post-state of the province address (Sopa) engagements.

The office of the premier said its engagement with farmers in the Chris Hani District Municipality was “to maximise on its potential and turn the province into a food basket of the country and the SADC region”.

Said Masualle: “The economy could thrive when we develop the agricultural potential that we have. Yes, we do have a well-established auto sector in the Eastern Cape. But we also have something that we can claim as our own in the agricultural sector, in which we can participate in numbers. We want to develop it and we want farmers to engage with us and make inputs so that we can see the Eastern Cape economy thriving and giving impetus to what we can achieve through livestock and crop farming.”

The ambitious goal of turning the province into the breadbasket of the SADC region is part of the Eastern Cape Agricultural Transformation Strategy, which, according to Qoboshiyane, the province has taken major steps towards achieving.

“Since we have launched the Agricultural Economic Transformation Strategy, we are forging ahead with efforts to maximise the use of land in communal areas. Chicory production in the Ndlambe Municipal area (around Port Alfred) has been increased and the communities have signed off-take agreements with Nestlé SA and Chicory SA. So as they plant, they know there is already a market.”

Qoboshiyane said Eastern Cape dairy farmers already supply about a third of the country’s milk requirements, and the provincial government intends to increase the province’s slice of the pie.

“As the provincial government we have built a dairy in Tsitsikamma, which was opened officially last year [2017]. It was built for black and smallholder farmers and in partnership with white commercial farmers, about 950 cows are milked there. Dairy is one of the areas in which black farmers can enter the value chain.”

“Now 60 000 litres of milk are produced per day from 10 000 litres previously … All irrigation schemes are working, and we need to increase our 30% milk production in the country,” he said. 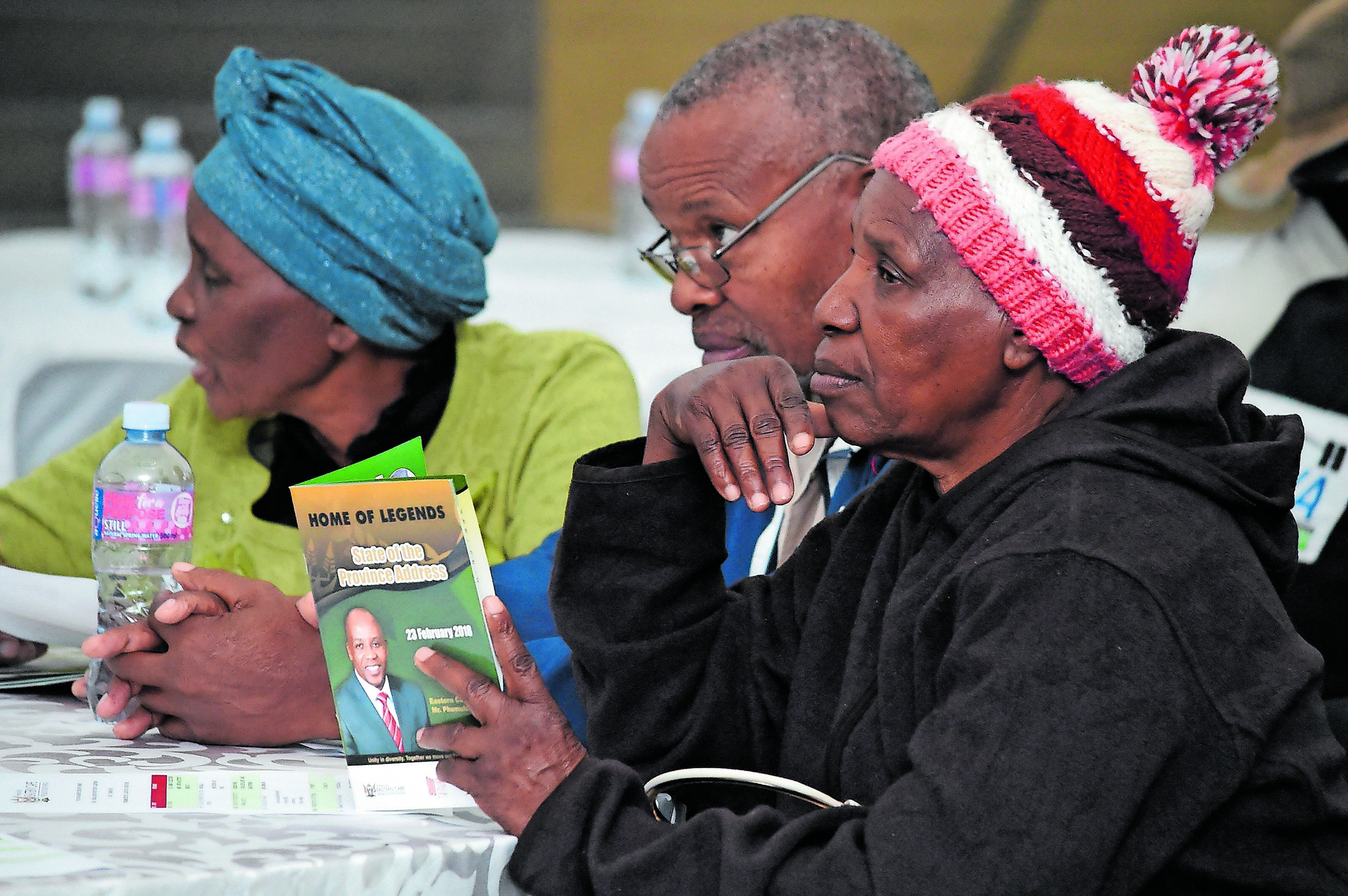 Eastern Cape premier Phumulo Massulle spoke at his post-state of the province address, an event attended by, among others, farmers from the local community

The province has also developed Rural Enterprise Development (RED) Hubs, where rural communities produce mainly maize on 2 000 hectares of land which is then milled locally, packaged and sold to retailers such as Spar in King William’s Town, for example.

“We then train the communities and create secondary co-operatives,” said Qoboshiyane.

The province is also expanding citrus industries and providing packing sheds in Ripplemead, near Peddie, of which the second phase will possibly be completed in July. Pineapple producers in Bhingqala, also in the Peddie area, have off-take agreements with the Summerpride Foods factory in East London, which produces concentrated juice.

“We can then become a major player in terms of commodity export, increase provincial revenue and ensure exports to boost our foreign exchange.”

Qoboshiyane said the Chris Hani District was strong in both commercial and communal farming. Feedlots have been set up for communal farmers, where cattle are fed for 50 days to prepare them to be taken to the market. In Komani, the government has spent R22-million on an abattoir.

Masualle added: “We came to Komani to engage with farmers of the Chris Hani district. We noted that there is a great skill among the farmers of this district. We are here to say that our province’s economy would do much better if we can focus on developing crop farming and livestock farming.

“We are fortunate because when the MEC for finance was delivering his budget speech, he said to encourage this dedication by farmers; we are going to develop agriculture in the province.”

Delivering the Eastern Cape budget speech earlier this month, provincial finance MEC Sakhumzi Somyo reiterated President Cyril Ramaphosa’s words, who said in his state of the nation address: “Agriculture presents one of the greatest opportunities we can use to significantly grow our economy and create jobs.”

Somyo allocated R2.3-billion in 2018/19 and R7.2-billion over the Medium-Term Expenditure Framework (MTEF) to the department of rural development and agrarian reform “to stimulate agricultural production in our province, with the aim of transforming the sector to benefit the majority of our people”.

Of this, R211.6-million in 2018/19 and R690.3-million over the MTEF was allocated for infrastructure support to farmers and communities.