#LifeEsidimeni: In six weeks we’ll know if Qedani Mahlangu will be prosecuted

The R135‑million in constitutional damages awarded to claimants in the Life Esidimeni tragedy this week — the largest award of its kind in South Africa’s history — could increase to 10 times that amount.

Constitutional damages of R1-million each were awarded to 135 claimants, in addition to funeral-related expenses and R180 000 for shock and psychological trauma.

Moseneke ruled that it was “appropriate relief and compensation for the government’s unjustifiable and reckless breaches” of at least six sections of the Constitution and “multiple contraventions” of the National Health Act and the Mental Health Care Act.

Between October 2015 and June 2016, 1 711 psychiatric patients in Gauteng were transferred from private Life Esidimeni health facilities, for which the state had paid, to largely ill-equipped community organisations with little to no experience in caring for mental health patients.

The move came after the provincial health department ended a 30-year contract with the Life Healthcare private hospital group.

The department ignored repeated warnings from families and civil society organisations that transferring patients to unqualified organisations, which Moseneke referred to as “death and torture traps” in his arbitration ruling, could lead to the death of psychiatric patients.

As a result, 144 patients died, and 1 418 were exposed to “trauma and morbidity” but survived, according to the arbitrator’s report.

Moseneke ruled the sites were “hand-picked” by senior Gauteng health department officials, such as then health MEC Qedani Mahlangu and her head of department, Dr Tiego “Barney” Selebano, with an “irrational and arrogant use of public power”.

All claimants received the same award, regardless of whether their loved ones died or survived.

But the number of claimants is now likely to increase from the original 135, after Moseneke invited those who hadn’t been part of the arbitration — at least 1 350 of those who survived didn’t join — to come forward.

“Not all have joined the process. When they find their voice or way, I trust that the government would choose to meet their claim in terms identical to the award than to set up new litigation of another arbitration process,” Moseneke said in his arbitration award.

Within a day after the ruling, 10 more families and patients had already contacted the arbitrator’s office. “I’ve taken down their details, and sent it through to the mental health director in the Gauteng health department to determine if they qualify for the award,” spokesperson Obakeng van Dyk said. 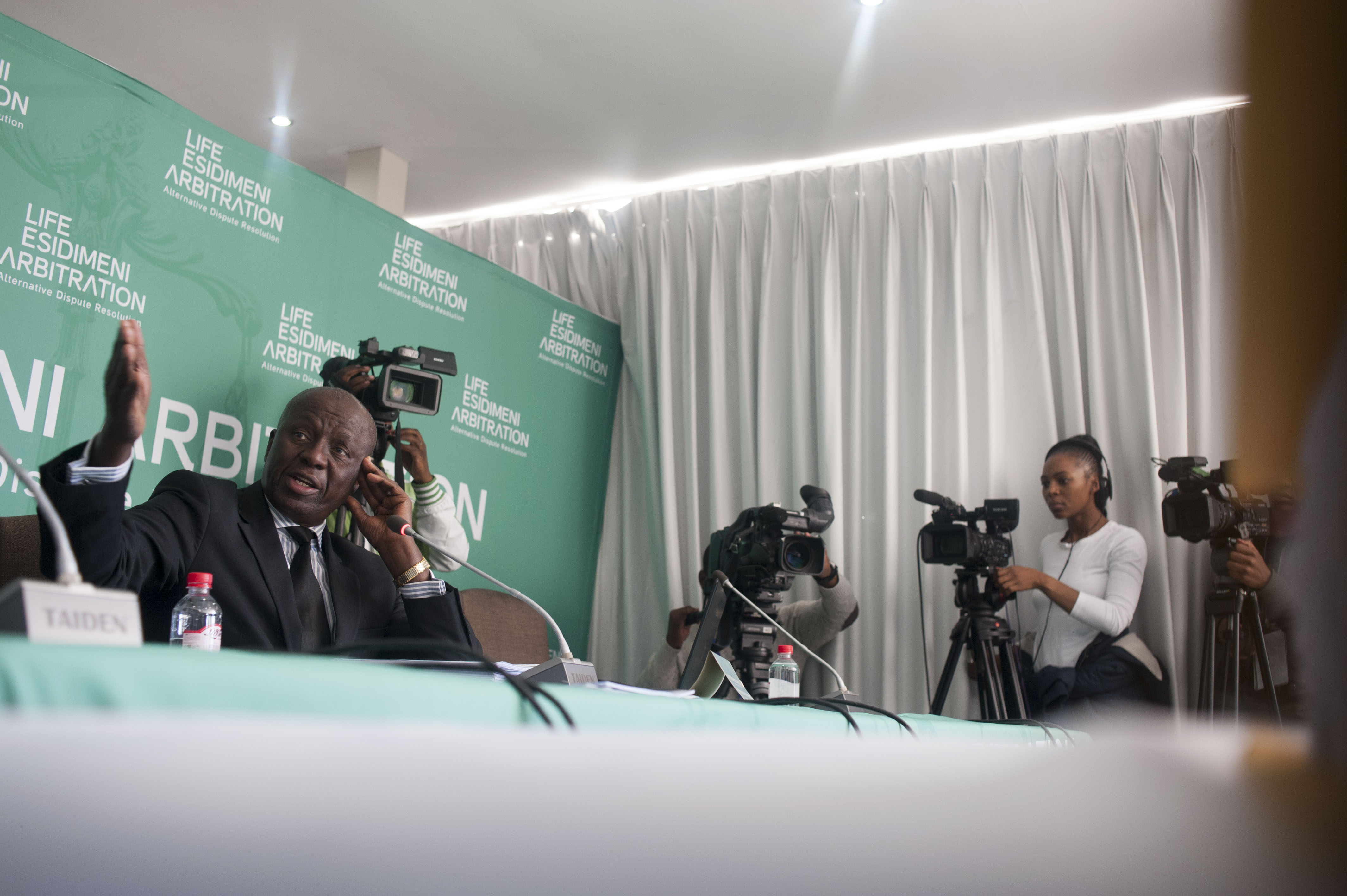 Historic ruling: Retired judge Dikgang Moseneke said that he hoped the families of affected mental health users, who were not part of the Life Esidimeni arbitration, would come forward and claim the compensation they were due. (Delwyn Verasamy)

In order to qualify, patients should have suffered trauma directly as a result of the transfers and should be able to prove that they or their loved ones were transferred between October 2015 and June 2016.

There have been two major constitutional damages awards in the past, but these were significantly smaller than the Life Esidimeni award and were made in court cases and not by arbitration agreement.

In 2006, the Eastern Cape high court ordered the welfare MEC in the province to pay “Mrs Kate” damages for failing to process and pay her disability grant within a reasonable period”, after the state had taken 40 months to do so.

And in 2005, the department of agriculture and land affairs had to pay constitutional damages to a private company in Benoni, Modderklip Boerdery, after the Constitutional Court ruled that the state had failed to protect Modderklip against the unlawful occupation of its property.

Although the size of the award wasn’t specified, the ruling stipulated that it could not exceed the property’s value, which was less than R1.8‑million.

Because the Life Esidimeni award is an arbitration award, which is a private agreement between two parties, it can’t set a legal precedent for courts.

But, it will undoubtedly “set a standard”, says advocate Adila Hassim, “because constitutional damages this high have never been awarded before”. Hassim was part of social justice organisation Section27’s legal team that represented 63 of the Life Esidimeni claimants.

Sasha Stevenson, who was also part of the team, agrees: “Because this is such an important and public matter that was decided by the former deputy chief justice, it will have persuasive value to those who are deciding other cases.”

The Life Esidimeni tragedy is also likely to end up in the criminal court. Two parallel criminal investigations — one by the South African Police Service and another by the Special Investigating Unit — have been opened.

Pindi Louw from the National Prosecuting Authority’s Gauteng office confirmed that the office had received 140 inquest dockets from the police for a decision on whether to prosecute.

Mahlangu, Selebano and the director of mental health services at the time of the Life Esidimeni patient transfers, Makgoba Manamela, could all potentially be implicated in charges including murder, attempted murder, culpable homicide, perjury and corruption.

“Deputy director of public prosecutions George Baloyi has assigned a team of prosecutors to work on those documents. They will take between four to six weeks … and will then announce their decision,” Louw said.

The families of Life Esidimeni patients walked out en masse after the testimony of former Qedani Mahlangu at the arbitration.

Moseneke labelled Mahlangu’s and Selebano’s testimonies during the arbitration hearings as “fabricated and patently false”. “All we can hope for is that, one day, the true reason for the conception and implementation of the Marathon Mental Health Project [of which the Life Esidimeni patient transfers formed part] will see the light of day,” he said.

The spokesperson for the Life Esidimeni families, Christine Nxumalo, said, although they accepted the compensation, they still wanted the department to be held accountable. “We see Qedani Mahlangu and her officials as proper traitors, because they didn’t provide us with the answers we asked for in the hearings,” she said.

“You don’t just forgive a traitor. We want to see that justice is done.”

Mia Malan
Mia Malan is the founding director and editor of the Bhekisisa Centre for Health Journalism at the Mail & Guardian. She heads up a team of fifteen permanent and freelance staff members. She loves drama, good wine and strong coffee, not necessarily in that order.
Facebook
Twitter
WhatsApp
Linkedin

We had no control over rushed and haphazard transfer of Life Esidimeni mental patients, former director tells inquest

An inquest into the Life Esidimeni tragedy will start in July