‘Her banishment, our blessing’

Apartheid’s racist spatial planning is evident in Brandfort in the Free State. Thick vegetation and a national highway separate town from township, and members of different races seldom interact. 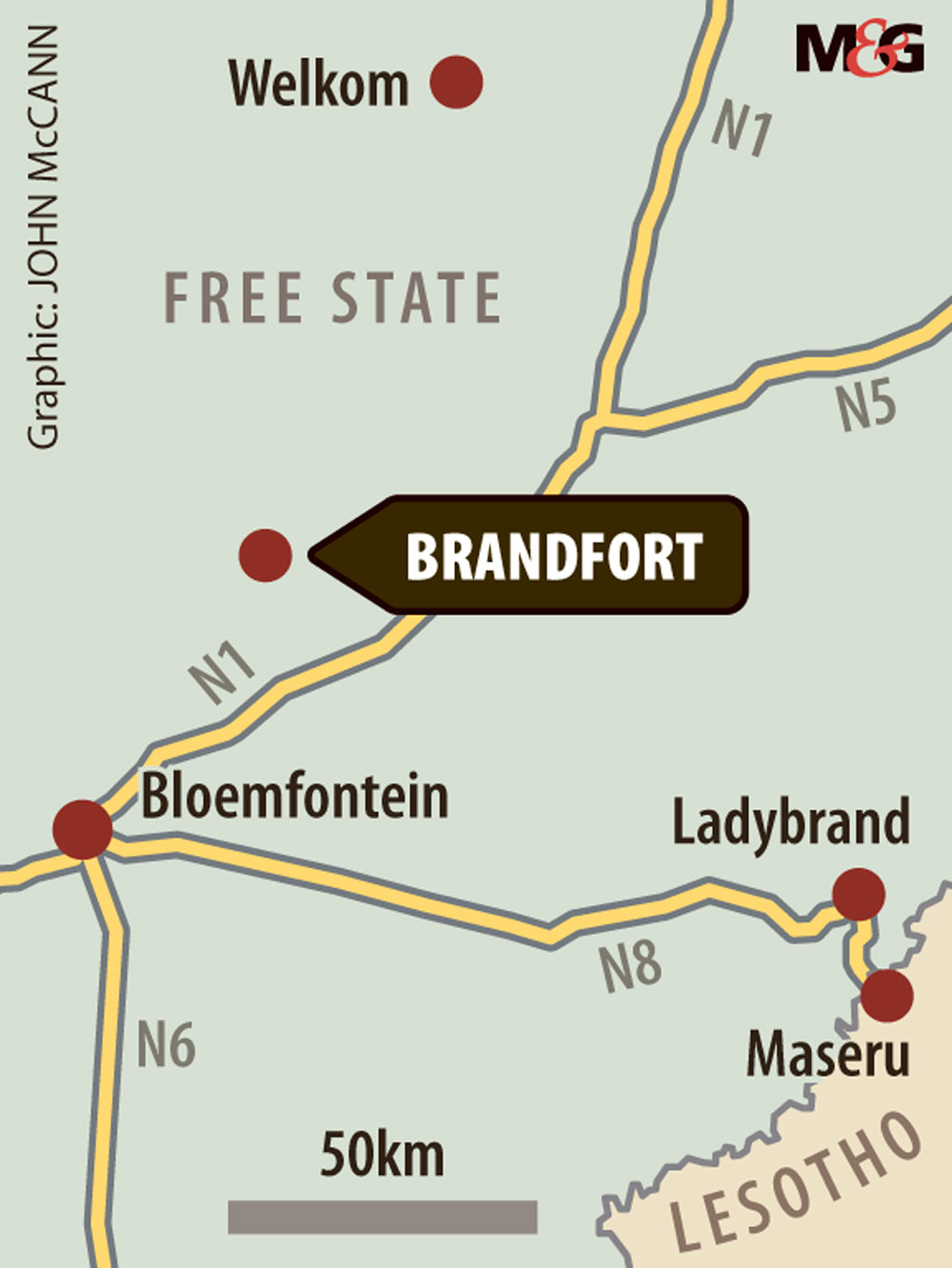 The banishment of Nomzamo Winnie Madikizela-Mandela to Brandfort’s Majwemasweu township from 1977 to 1984 by the regime sought to use this divide to silence one of the government’s most potent threats but instead ignited the resistance movement in the dusty town.

Before her arrival, the township’s Sesotho-, Setswana- and Afrikaans-speaking communities would seldom confront the racist system, residents told the Mail & Guardian this week, and when the Security Branch exiled the revered freedom fighter, it had no idea she would recruit dozens of activists to her cause.

“Nomzamo being here in Brandfort was a blessing in disguise,” 75-year-old Norah Moahloli said. “It was horrible for her because she used to not be able to speak to people freely and was stuck here, but for us, she woke us up. She made us care for each other.”

Moahloli, a retired primary school teacher, spent nearly all seven years of Madikizela-Mandela’s banishment with her and became her closest comrade in Brandfort, carrying out her instructions by setting up women’s and children’s organisations. 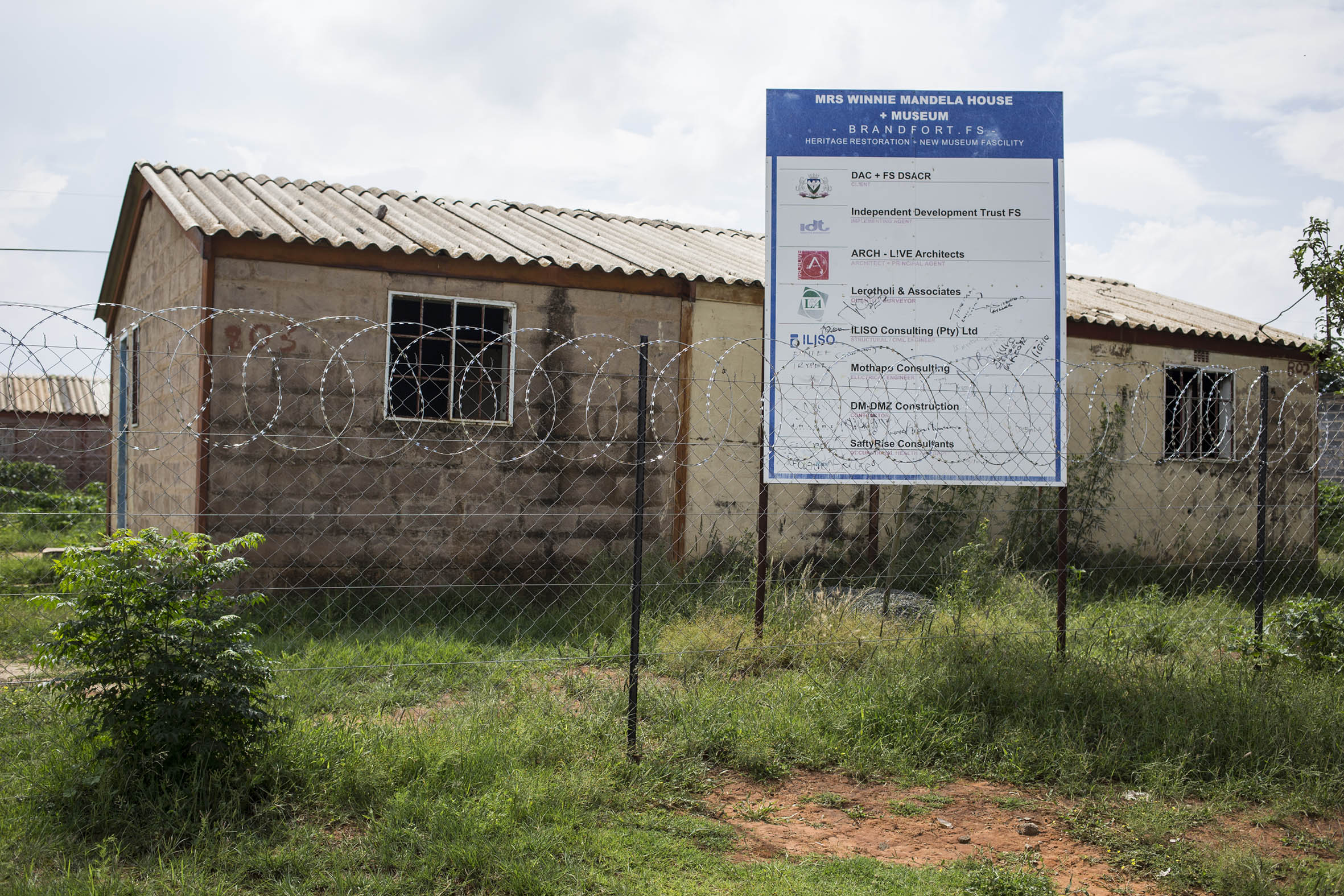 [Monument: The Winnie Mandela Museum in Brandfort is a reminder of Winnie Madikizela-Mandela’s banishment there from 1977 to 1984. (Wikus de Wet)]

Madikizela-Mandela arrived in Brandfort traumatised after 18 months of solitary confinement in the Women’s Jail in Johannesburg. She received no counselling after months of not being allowed to clean herself or speak to other prisoners.

At house 802 in Brandfort, the regime attempted to impose similar conditions on the liberation hero, confining her to a three-room house without water or electricity and warning the residents of Majwemasweu not to speak to her.

“The white people said, ‘There is a woman who was dumped in your location, a communist, be careful, do not speak to her.’ I was staying at house 806 and had to walk through her yard, and I was teaching isiXhosa at the school, so we ended up being close,” Moahloli said.

But Moahloli was also surveilled by the apartheid police. Raids became the norm at her house and at those of others who visited Madikizela-Mandela.

From atop the tallest koppie in Brandfort, the Security Branch commanded a base to monitor activity in Majwemasweu’s dusty streets and outside house 802, as well as the roads leading into the township.

“They would sit on that koppie and watch with binoculars. They were there every single day,” she said.

In the opposite direction, trees are scattered between buildings and churches in the town of Brandfort, reserved for whites only.

“There used to be this alarm that goes off at 6 o’clock every day. When we heard that we know we must not be found in the street. When we go to the shop, they only had a window where you must put the money down. They didn’t even take it from your hands,” Moahloli recalled.

“But after Nomzamo arrived, we began to demand that they treat us like humans. Now we would go in the shops and speak to the whites. Just the fact that she was in the town made them nervous. Her shadow was so powerful.”

Madikizela-Mandela wasted no time in emboldening Brandfort residents to fight apartheid, Moahloli said. In the same year she was exiled to Brandfort, she organised a protest.

“We didn’t think we should do anything about the Soweto killings in 1976 but Nomzamo made us observe that day on June 16 1977,” she said.

On her way home from town on June 16, police and army vans lined the street on the way to the township waiting for Madikizela-Mandela. “She was driving back with her fist out of the window shouting ‘Amandla!’ She had no fear of those police. That was the first time we saw someone challenging the whites like that,” Moahloli said.

“We organised women who were abused and raised the spirit of self-confidence in women. She was interested in making us courageous and making us activists,” said Brandfort women’s league founding member and current secretary, Gladys Mafa.

Madikizela-Mandela also used her skills as a qualified social worker and her connections in Johannesburg to groom young activists inspired by her presence. She started a crèche, helped young mothers, started an orphanage and set up ANC structures in the area.

“She was a very, very strong woman with a strong voice. She looked at the children without parents and said: ‘No man, just organise a crèche here in Brandfort. Go and organise the women to make the crèche.’ Nomzamo sent four women to Ntokozeni in Soweto to observe how to run a crèche,” Moahloli said.

Within just three years Madikizela-Mandela had established a network of allies in Brandfort despite being largely confined to her home. They included a preacher, Pastor Morgan, Moahloli and a number of young women who came to relate to her as their “godmother”. The crèche was eventually started at the Methodist church, which Pastor Morgan would also use to hold secret meetings for the anti-apartheid movement.

“She gave us the confidence to fight the system. The whole town was aware of her. In the township we were proud of her but in town the whites were so scared,” Mafa said.

Madikizela-Mandela herself reflected on these first three years in Brandfort in a letter she wrote to Moahloli in 1991. “I have reflected a great deal on those who made it possible for me to pull through this experience without a flinch, because I knew I had a pillar on which I could lean, pillars which gave me the necessary morale and strength to maintain one’s dignity in our blistering inferno of racial hatred.”

This week Madikizela-Mandela’s Brandfort comrades said they are disappointed by the state of house 802 and the orphanage she started. House 802 stands neglected with charred walls, wiring stripped from its frame and windows broken, and the orphanage’s houses still bear a muddy red colour but have broken windows and there’s no security. A tavern operates across the road. 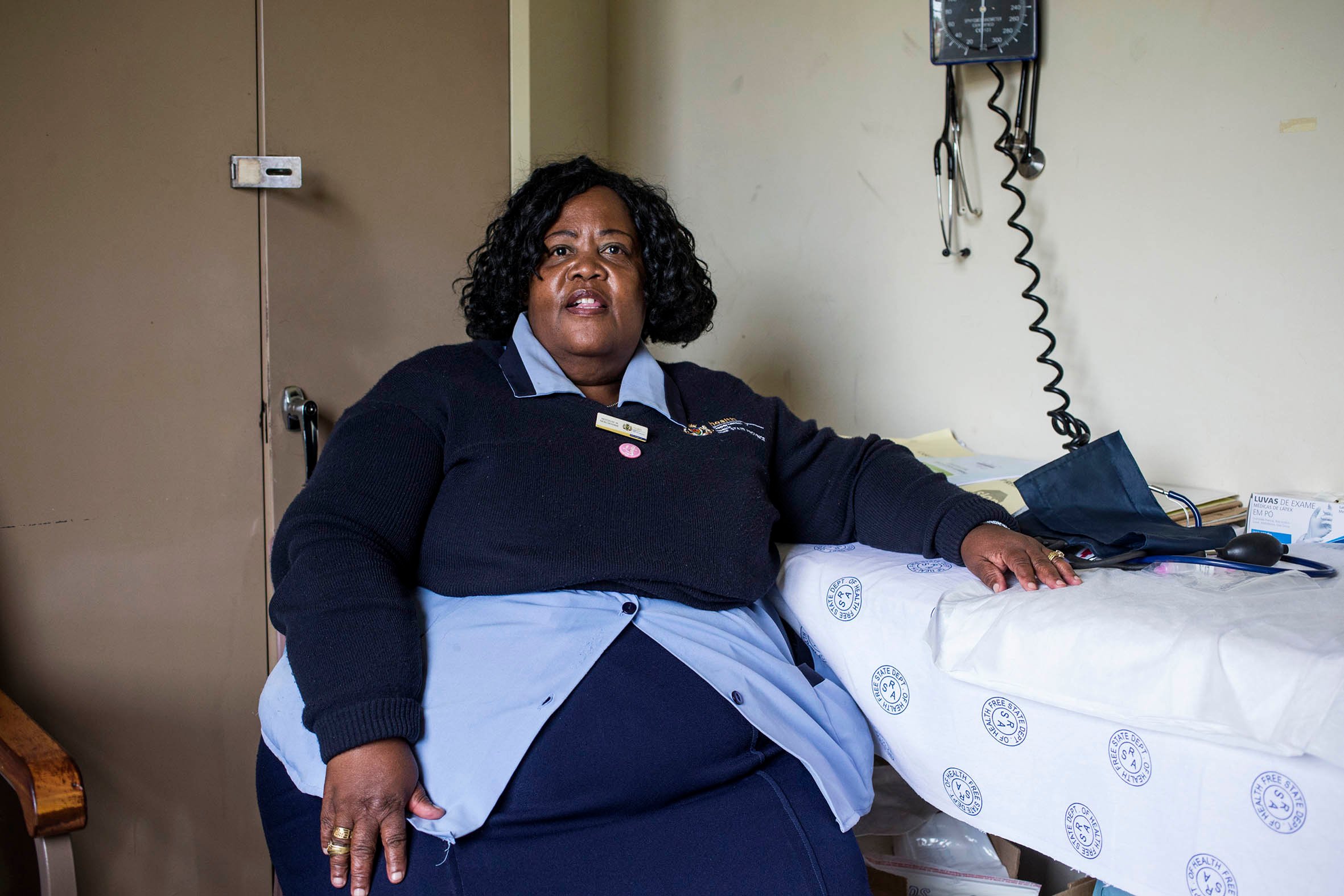 [Night shift: Motselisi Mokgwamme says young women met at house 802 at 2am, after the Security Police left their lookout, to learn from Winnie (Wikus de Wet)]

At the local clinic, Motselisi Mokgwamme works as a nurse and services a packed waiting room each day. Patients queue from outside. One was pushed in a wheelbarrow from the furthest corner of Majwemasweu.

Mokgwamme says her sense of duty to serve was awakened by Madikizela-Mandela. At the age of 24 in the early 1980s, Mokgwamme would join other young women and visit Madikizela-Mandela after the Security Branch left the koppie at 2am.

“We would learn about history and what we should do to help the black people in our community. Mama Winnie is someone who wanted us to use our skills and not wait for white people,” she said.

During these visits, the women would pack care packages for mothers who had just given birth. The supplies arrived in the middle of the night from Johannesburg and were stored at house 802. The next evening they were collected and distributed by Mokgwamme and her team.

Raids and arrests were common during Madikizela-Mandela’s banishment. A close friend in Brandfort, Godfrey Katola, recalled how the Security Branch pounced on activists who had gathered at the house for an impromptu meeting.

“That day more than seven vans came, man, I couldn’t believe it. They took everyone who was in the house early that morning and arrested them. But it never stopped anyone from seeing her again. By that time she had made us less scared of the police,” he said. 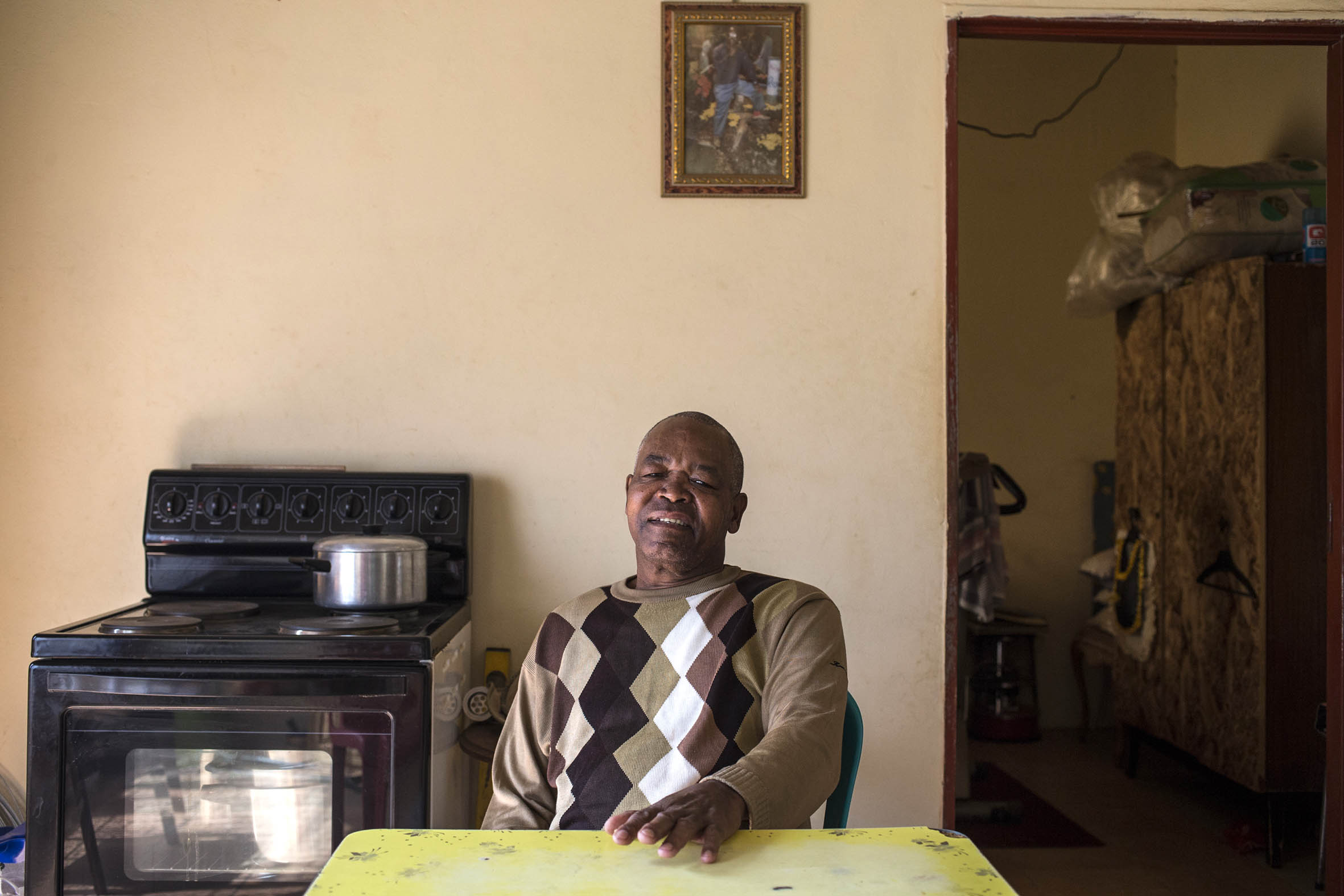 Katola bowed his head when asked about the state of the projects she championed in Brandfort, and said he was shocked and dismayed by her death.

For Moahloli, it was debilitating. Last Sunday, the day before Madikizela-Mandela died, Moahloli happened to be in Johannesburg and decided to visit her comrade in Soweto, only to find that she had been taken to hospital.

“So I left a note with the security guard, saying: ‘Hi Nomzamo, just to say hi and get well soon, your friend and comrade Norah.’

“When my son called me he first asked if I’m sitting down before telling me Nomzamo is no more,” Moahloli said.

“I was so bitter that I couldn’t do a thing.”