VAT not all bad news

The bad news, as we all know, is that value added tax (VAT) has gone up by a percentage point to 15% but the good news is that in today’s tough economic climate the full increase is unlikely to be passed on to the consumer.

Giant retailers such as Shoprite Checkers are reporting low internal inflation levels ­— “well below 1%”. The group noted that more than 5 280 of its 24 000 products are in deflation. Cake flour is one such item; it’s 10% cheaper now than a year ago. So even after the new VAT rate is applied it will still be cheaper than last year.

Shoprite said that in some cases it had asked suppliers not to increase their prices, “based on the fact that the rand is at 2.5-year lows and suppliers who import raw materials are in a 20% to 25% better position than last year”.

Shoprite, which owns subsidiaries such as Checkers and OK outlets, said, although some prices increased on April 1, it had not added one percentage point to all of the 24 000 products in its supermarkets. “We will be phasing them in and, where possible, absorbing the increase and wherever possible shielding customers sensitive to price increases as much as we can.

“For example, we do not want to push up the price of our R6.99 cans of baked beans as they are priced for affordability. We will absorb the VAT increase and keep the price at R6.99,” the company said.

The group is also running a VAT subsidy programme in April, with which it will absorb the VAT increase on 12 products, in addition to the 19 existing zero-rated products. These include Kellogg’s Corn Flakes, Rama margarine and Nestlé Ricoffy.

Mike Schussler, director and chief economist of economists.co.za, said retailers were trying to retain their customers.

“Businesses and retailers are trying to absorb some of the cost. They are trying to tide their customers over for a while. I don’t think it can be permanent as South African businesses don’t have that capacity,” he said. 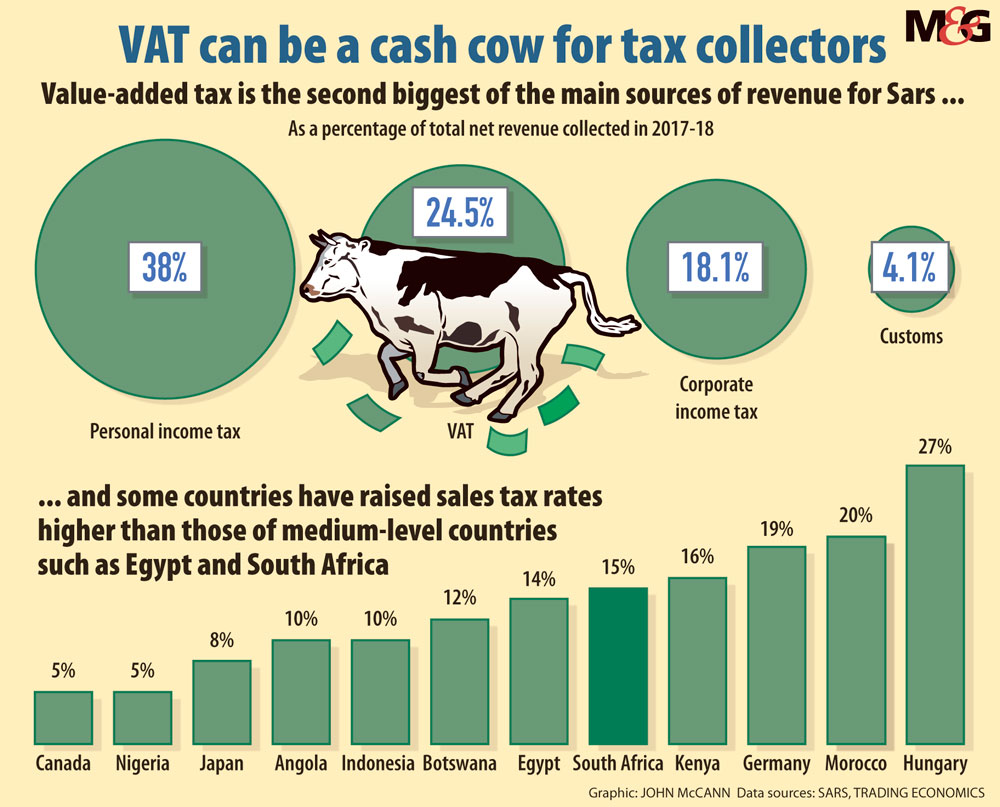 Schussler said South Africa had one of the highest tax burdens in the developing world but citizens did not benefit. In addition to VAT, consumers also had to pay other indirect taxes such as fuel levies and the sugar tax.

Merely comparing VAT tax rates internationally was not useful, he said, because the overall tax burden should be considered.

“In terms of VAT rates we’re certainly in the middle range but what we forget is that many countries have two, three or four VAT rates and they have more products which are either exempt or zero-rated.

“When I look at what we collect then the burden is a lot more. For example, in Belgium the top VAT rate is 21% but VAT on things such as food, schools, books, medicine and newspapers is only 6%. In the UK there’s zero-rating on educational books, newspapers and food,” said Schussler.

Treasury has asked the chairperson of the Davis tax committee, Judge Dennis Davis, to appoint a panel of experts to review the current basket of zero-rated products to see what can be done to mitigate the effect of the VAT increase on the poor.

Miyelani Maluleke, an economist at Absa, said, although the review was something to be welcomed, it was also important to note that increasing the number of zero-rated items was not the best way to protect the poor in a fiscally constrained environment “since the benefits of zero-rating would also flow to the wealthy”.

“More targeted interventions should be considered,” he said.

Spar was one of the first retailers to announce it was going to pay the 1% increase on some of its products — 1 700 Spar-branded products for the next three months to June 30.

David North, the group executive of strategy and corporate affairs at Pick n Pay, said the retailer wanted to implement VAT “smoothly” by ensuring that the increase was reflected at the tills and on the shelves. VAT increases on promotional items that ran for the Easter period were absorbed by Pick n Pay.

On Tuesday the South African Revenue Services announced it had collected R1.216-trillion in revenue for the previous financial year, missing treasury’s target of R1.217-trillion by 0.6%.

Finance Minister Nhlanhla Nene said a slow recovery in consumer confidence had resulted in lower domestic VAT collection as cash-strapped citizens worked to reduce their debt. “As a result, domestic VAT [collection] grew at a muted level of 4.5%, well below the 8.1% growth seen in the previous year.”

Overall VAT contributed R297.8-billion, or 24.5%, of the total revenue collected.

Maluleke said treasury’s ability to meet its VAT revenue target this year would be dependent on the overall strength of economic activity and household consumption expenditure in particular.