The prestigious Giro d’Italia cycling race plans to step into the second century of its esteemed history with a new cycle route through Israel — ensuring that it makes headlines for all the wrong reasons.

This is the first time in its 101-year existence that the race, which begins this weekend, has started outside Europe. Race organisers the RCS Media Group changed the route after a $32.4-million (R410-million) investment into the race by the Israeli government and Canadian-Israeli billionaire Sylvan Adams to bring the race to Israel.

“This will be a very special edition of the Giro,” said RCS’s race director, Mauro Vegni. “It’s a new starting point, not only for the Giro, but it’s historic because it takes the Giro out of Europe for the first time.”

In recent months, Israel has again been heavily criticised for the killing of unarmed Palestinian protesters who have been gathering at the border between Israel and Gaza in the build-up to the Nakbah, a day in mid-May marking the period in 1948 when more than 700 000 Palestinians fled or were forced from their homes. The day is also marked by Israel as Independence Day.

The Israeli government has made it clear that the race, which starts and completes its first three stages in Israel, has an agenda that goes beyond just sport. Israel’s minister for strategic affairs, Gilad Erdan, said that the start “is a huge achievement in and of itself that strengthens Israel’s legitimacy”. The Israeli press office did not respond to a request for comment. But human rights organisations believe the race will have the opposite effect.

“The authorities in Jerusalem may have thought that the glitz of the Giro d’Italia might have a sport-wash effect, removing some of the stain of Israel’s human rights record. Instead, it’s likely to bring it back into focus yet again,” Kate Allen, Amnesty International’s United Kingdom director, told the Guardian.

Since the announcement about the Israel start was made last year, 120 human rights organisations, boycott movements and trade unions — and 29 members of the European Parliament — have been calling for RCS to implement its “plan B” alternative route. They have called the race a blatant example of “sport-washing” Israel, or whitewashing its human rights violations by shifting the world’s focus to sport and using it to show the supposed normalcy of the country.

Stephanie Adam of the Palestinian Campaign for the Academic and Cultural Boycott of Israel said the organisation has reached out to the teams and riders in private letters and on social media, but has to date received no notice from any about teams boycotting the race.

Raffaele Spiga, from the Italian Boycott, Divestment and Sanctions movement, told the Mail & Guardian that riders have economic considerations: “The general trend for sportspeople is to try to stay away from any ‘political’ involvement. Teams are double-linked with organisers by contracts and are under threat of penalties or, worse, risk not being invited to further competition.” 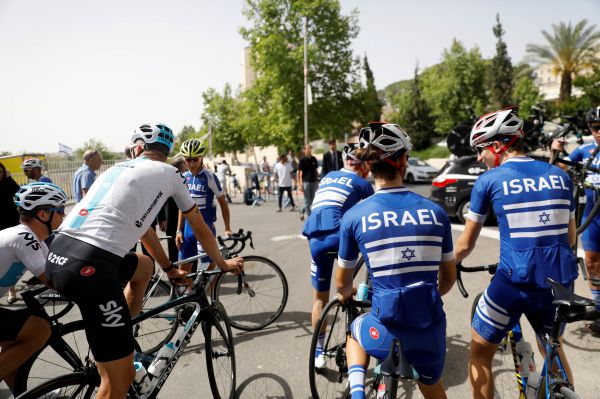 The South African team that will be riding is Team Dimension Data for Qhubeka.

When contacted for comment about the race’s routing through Israel, head of public relations Damian Murphy refused to be drawn on the matter. “As one of the 18 World Tour teams that has an automatic entry into the three annual Grand Tours — Giro d’Italia, Tour de France and Vuelta a España — the logistics of the race, including route, safety and host venues, is up to the organisers, in this instance RCS, and falls broadly under the auspices of UCI [the world governing body for sports cycling]. As such, any questions about the event should be directed to them,” wrote Murphy.

In March, popular DJ Black Coffee received sustained criticism for playing in Tel Aviv, prompting him to explain to his Twitter followers that he did it to feed his family.

However, the spokesperson for the department for international relations and co-operation, Ndivhuwo Mabaya, said: “On a government level, there is no sport or cultural boycott between South Africa and Israel.”

The route of the race and its terminology can also be seen as reinforcing Israel’s sovereignty over the entire city of Jerusalem, with the Israeli government insisting RCS change the public wording of the race start from “West Jerusalem” to “Jerusalem”.

Both Israel and the Palestinians claim Jerusalem as the site of their future capital.

According to Adam, “Italian groups are organising protests along the route from May 4 to 27 for the stages in Sicily, Campania, Emilia-Romagna, Friuli, Veneto, Piemonte and a week of actions prior to the arrival in Rome.”

In response to a letter in February from 29 members of the European Parliament to UCI, calling for the body to demand that the organisers move the race elsewhere, the race regulator said that it would “be extremely attentive to ensure that the race is not used for political means”.

Malak Hasan, a Ramallah-based Palestinian journalist and cofounder of Cycling Palestine, lives 10km from an Israeli settlement. She cannot cycle for more than a few kilometres without being blocked at an Israeli military checkpoint or an Israeli highway on which Palestinians are legally not allowed to travel, as has also happened in one of their tours of more than 3 000 cyclists. On Friday, they will be staging a protest from the centre of Ramallah to the Qalandiya checkpoint at the entrance to Jerusalem.

“People go crazy for sport,” said Hasan. “Israel has managed to put on this amazing event and the organisers know this will be used for political gain … By insisting that West Jerusalem is called Jerusalem, they are saying that Jerusalem will never be [Palestine’s]. This race is sending a clear political message.”