The testing ground: Could an experimental vaccine save the DRC from Ebola?

More than 4 000 doses of an experimental vaccine against Ebola have arrived in Kinshasa, the capital of the Democratic Republic of Congo, in a bid to check the spread of an outbreak that is alarming experts after it travelled from a remote rural area into a million-strong city.

DRC has successfully contained and ended two outbreaks in recent years, but this one looks different. Last year and in 2014, in contrast to the huge epidemic in West Africa, Ebola was swiftly extinguished by the Congolese who have experience of dealing with the disease.

There have been eight outbreaks since 1976 in DRC and 811 deaths. In the three West African countries where Ebola had been previously unknown before it took off in 2014-15, there were more than 11 000 deaths.

There have been 44 reported cases so far in DRC, according to the World Health Organization, whose director general, Tedros Adhanom Ghebreyesus, has already flown in to visit. The UN agency appears intent on being seen to be on top of this outbreak, having been heavily censured over its failures in West Africa.

Watch: Love in the time of Ebola

Tedros went to the rural epicentre in the Bikoro health zone, where there are few health facilities and villages are hard to reach in the current rainy season. But it is the confirmation of one case of the Ebola virus in Mbandaka, a city of more than 1-million people located 80 miles from Bikoro, that is now causing alarm.

Tedros said the spread to the city was “a concerning development”. So did Jeremy Farrar, head of the Wellcome Trust, which has made £2m (R34-million) available for the response to the outbreak. “Ebola spreads rapidly, and this outbreak is in an area where people connect, trade and travel – an environment ripe for spreading disease,” he said.

Both hope the vaccine, which was successfully trialled in Guinea in the last stages of the West African epidemic, can swiftly bring the outbreak under control. There are now two such vaccines – one made by Merck, another by Johnson & Johnson.

Ebola haemorrhagic virus spreads through contact with bodily fluids. Those who are very sick bleed copiously, so the family and carers, including hospital nursing staff and burial workers, are particularly at risk. In the dense populations of cities, the potential for spread is much greater than in villages. 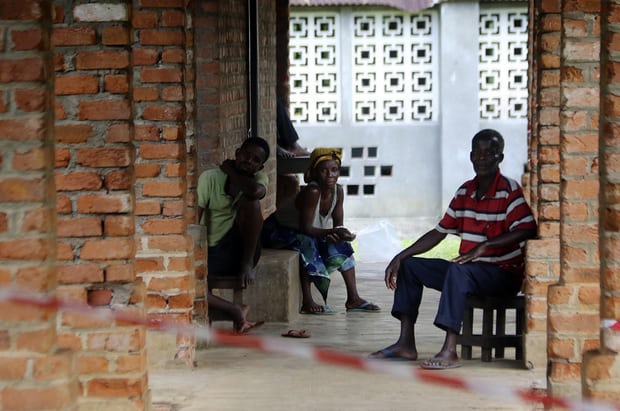 Tracing the contacts of the sick – and their contacts – is crucial to containing Ebola. In Sierra Leone, Guinea and Liberia, families were taken to isolation centres and whole villages were placed in quarantine. Such stringent measures, as well as the ban on burying the dead with traditional rites that included washing the body, caused much distress. Families hid the sick and the dead and the virus continued to spread.

Doctors Without Borders (MSF) is leading the response on the ground, as it did in West Africa. Luis Encinas, MSF’s emergency coordinator in Kinshasa, said that preparations were under way but that vaccination would not start before next week.

“It is not a simple mass vaccination campaign,” he said. Neither vaccine is yet licensed for use so this will be another clinical trial with a strict protocol. “We need to have consent from all the people who are eligible to be part of the study and let them withdraw from it any time they want,” he said.

This will be what is known as ring vaccination. Health workers and burial workers will be offered the vaccine first, but after that it will be available to all the immediate family and friends and others who have had contact with any person who has fallen ill.

Then it will be offered to all of their contacts. That will mean a “ring” of about 100 to 150 contacts for each person with Ebola. So the first shipment will be enough to vaccinate the contacts of 25 or 26 confirmed cases. More vaccine will be shipped in as needed. 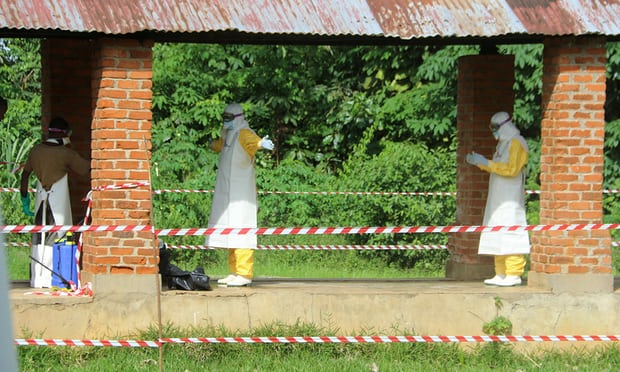 A health worker is sprayed with chlorine after visiting the isolation ward at Bikoro hospital. (Stringer, Reuters)

The logistics are also hard, said Encinas. They need to establish an “ultra-cold chain” – a way of transporting and keeping the vaccine at -80C until it is ready for use. It will be moved to Mbandaka by plane and then taken by road or possibly river to Bikoro – a long and difficult journey.

Peter Piot, director of the London School of Hygiene and Tropical Medicine and an Ebola expert, said the DRC had coped well with Ebola in the past. “They clearly have experience and know how to do it as long as it is in a rural area where it has been up to now,” he said. In the past, he added, “they got it under control in a couple of weeks without much outside assistance”.

But it is in the city that the vaccine would really have an important place in control, he said. The worst-case scenario is that somebody infected with the virus travels to Kinshasa, Piot explained.

“Then there would be a need for widespread vaccination.”