About a week ago, Beyoncé and Jay Z released their joint album, Everything is Love, while on stage during the European leg of their On the Run II tour. The release was accompanied by a video of the album’s first single, Ape Sh*t, a celebration of their triumphs, shot at the Louvre Museum in Paris, France.

Musée du Louvre is the world’s largest art museum and a historical monument. It is home to about 38 000 works of art that range from prehistory to the 21st century.

Its most famous works, used frequently in pop culture references, include the Mona Lisa, Venus de Milo and Liberty Leading the People.

Yet only a small portion of the art is by, about or from Africa and its diaspora. Although works from non-Western backgrounds are present, to many the Louvre continues to be attached to the eminence of Western art.

To prove this point, several sequences in the music video encourage the viewer to play a game of “spot the black figures” in paintings such as Paolo Veronese’s The Wedding at Cana and The Raft of the Medusa by Théodore Géricault. Brief close-up shots focus on shadow-like figures that may represent the artists’ depictions of black figures.

To counter this erasure, the Carters are filmed moving in opposition to the frozen stillness that the artworks embody.

In one scene, eight black women and Beyoncé face the camera, hand in hand, before The Consecration of the Emperor Napoleon and the Coronation of Empress Joséphine. When they begin to sashay in front of the painting, they divert attention from the image of relentless white extravagance to the union of black women. 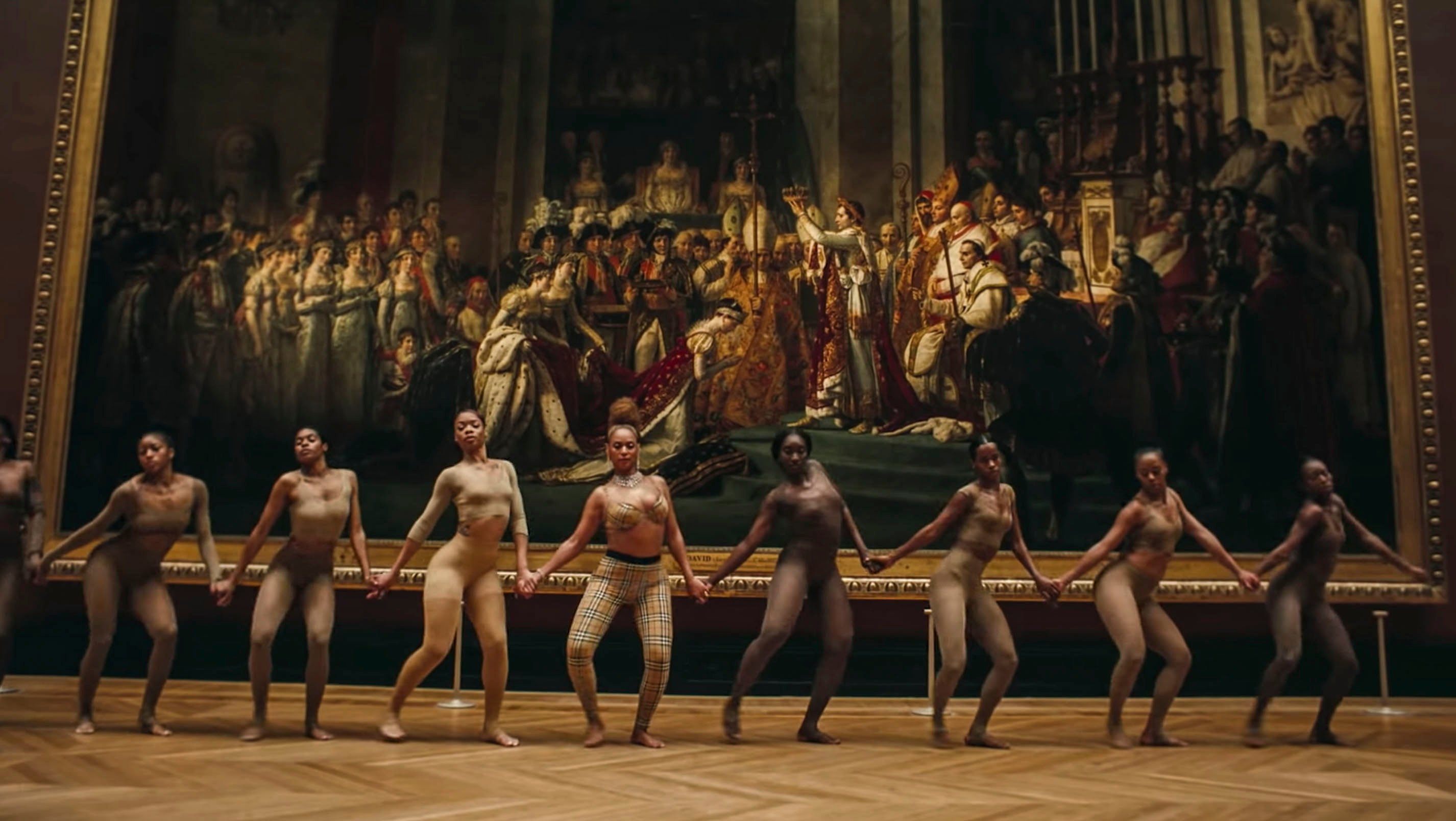 In another scene, the couple stand in front of the stationary and famously armless Venus de Milo statue. Although Beyoncé wears a leotard that mimics the white marble creation’s texture and silhouette, she interjects herself as the more superior being with her tall head wrap, her unwavering eye contact and being in perpetual fluid motion.

Despite being the music video’s central subject, Beyoncé does not eclipse the artwork on her own. On the stairs leading up to the Winged Victory of Samothrace statue, a dozen black women dressed in skintone leotards switch between lying lifelessly and sitting up in synchrony with the song’s Pharrell Williams-produced beat. Unlike the statue, they have the agency to shift between being still and taking action. 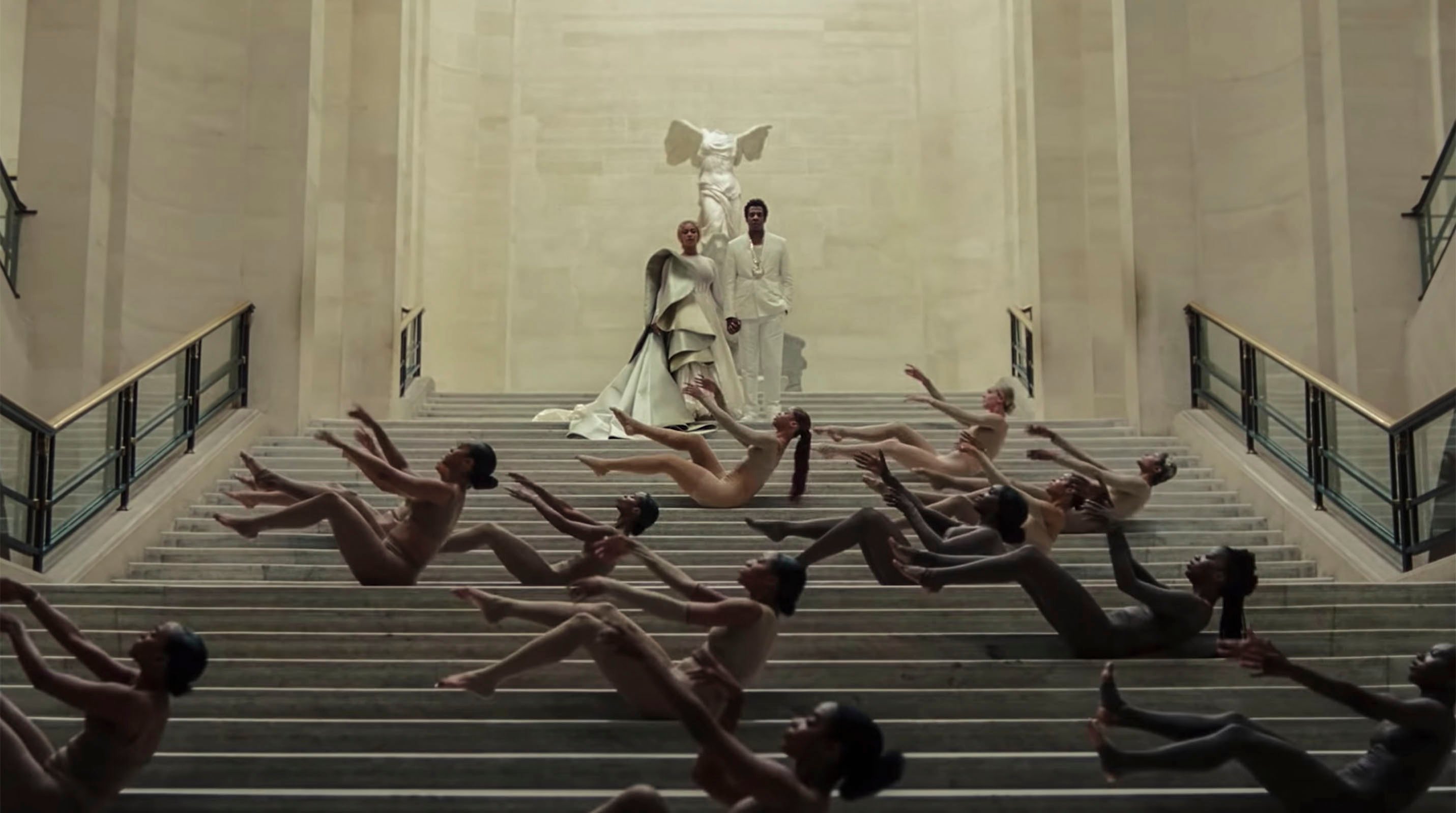 In addition to this, the album cover art for Everything is Love, in which a black woman tends to a black man’s German-cut Afro — whose expected backdrop might be a comfortable space such as one’s home or a barbershop — plays out in front of the Mona Lisa. And even though Jay Z may play a visual role in Ape Sh*t, he mainly exists as a lyrical auxiliary to his wife.

In these instances and others, the black figures occupy the space and fill the frame on their own terms. And the contrast between the art on the walls and the freely moving black women in the foreground on the museum floors cannot be ignored.

Ape Sh*t is directed by Ricky Saiz but Jenn Nkiru is responsible for shooting the video’s supplementary footage, which includes the establishing shots, inserts and cutaways that draw the viewer in. Nkiru is the British-Nigerian filmmaker behind the films Black Star: Rebirth is Necessary and En Vogue, which capture marginalised queer and/or African subjects through an unapologetic lens that sees them using the agency they are afforded. 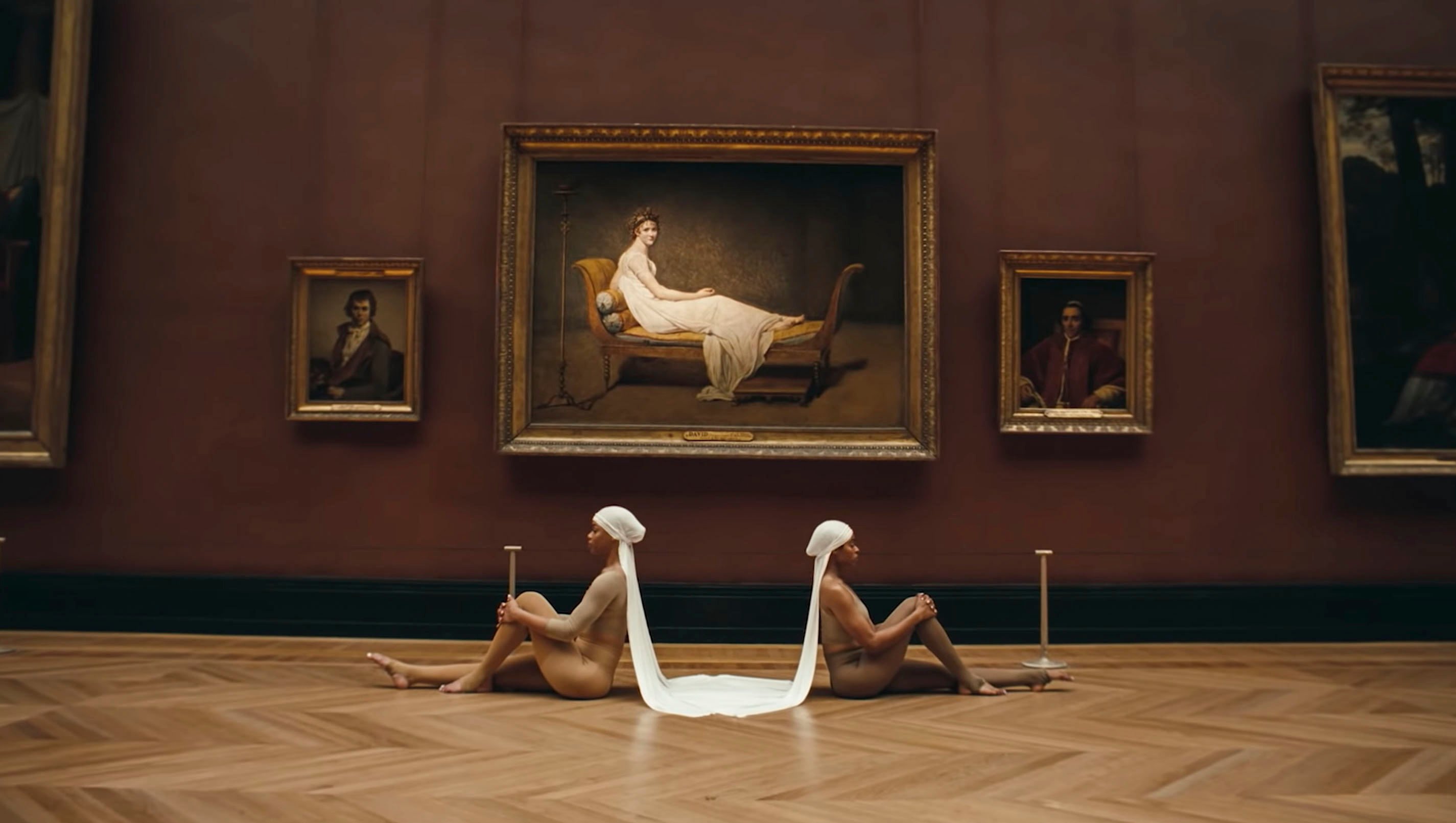 In the midst of the reclamation of space by black women, represented by Beyoncé and her dancers, the video cuts to a frame that focuses on the face of the subject of Marie-Guillemine Benoist’s Portrait d’une Négresse. Unlike other works of its time, the portrait depicts a guileless black woman in all her glory instead of in the role of a subjugated character.

The placement serves as an expression of gratitude to our foremothers who are often erased, misconstrued or forgotten.

Although the visual does well to claim one of the centrepieces of European culture in order to assert the couple’s black excellence and triumph over their recently publicised flaws, it remains within the confines of heteronormative black love. In addition to this, although they capture centre stage in a space that has historically made little room for nonwhite artists, I’m uncertain whether the multimillionaire Carters can be dubbed activists for this single piece of work.