Youth month reflections: where have all the voters gone?

June in South Africa is known as “youth month” and is meant to put the spotlight on the future of young Africans. On 16 June, Youth Day, the country is abuzz with events to showcase the talents of the youth and, in essence, give a glimpse of the future South Africa.

Youth month is also a month of reflection, and the Gauteng Provincial Legislature (GPL) took a moment to reflect on a disease threatening the democratic centre of South Africa: low youth voter turnout. The youth of the country, its highest population demographic, have been found to not be voting. The GPL has a constitutional mandate of ensuring that Citizens of Gauteng participate in democratic processes in the province and with ensuring pro-Gauteng laws are passed, while holding the Provincial Government accountable.

The GPL in partnership with the Mail & Guardian held a Critical Thinking Forum on Friday 15 June to examine the causes behind low youth voter turnout. This forum involved a panel discussion facilitated by Khaya Sithole, chartered accountant and corporate finance consultant and was opened by the GPL’s Chairperson of Committees Mike Madlala. “To vote or not to vote” was the topic of discussion, which took place under the hashtag #MyVoteMySignal.

Participants discussed how Nelson Mandela’s struggle for South African democratic equality did not begin with him as the heroic president leading South Africa out of the apartheid era. His heroism began with a decision, along with Walter Sisulu, to start the ANC Youth League, and of course to found uMkhonto we Sizwe, the ANC’s armed forces dedicated to fighting apartheid through military means. Mandela and Sisulu realised non-violent and non-militant protest was not moving the needle in terms of building an equal South Africa. Importantly, the struggle for South Africa was fought by many South Africans, even with different ideological beliefs. Robert Sobukwe and Dikgang Moseneke did not even have the same ideological beliefs as Mandela at the time, yet contributed to fighting apartheid. There were many civil society organisations which also got involved and, along with the collective effort of the youth (such as the 1976 Soweto uprising aimed at fighting the oppressive education system of the past), helped us enter democracy.

The new South Africa allows all South Africans over the age of 18 to vote and have access to democracy. Many South Africans now believe the current South African issue tearing at our soul is economic transformation. The government has tackled the issue from many angles, debating around land expropriation and policy documents such as the Broad-Based Black Economic Empowerment Codes of Good Practice to give all South Africans access to the economy.

South Africa’s population is youthful, with the highest demographic comprising the 18-29 age group. However, studies have shown that this population showed up the least to the polls. Sithole emphasised that if every single youth voted, their vote alone would remove the current party, or help amplify their victory.

Some of the pressing issues during the debate centred around voter education, innovation in the voting booth and whether young people feel heard by the government.

Part of the reason many youth do not vote is that, politics in itself, is not reflective of the youth. The average age of a parliamentarian in South Africa is 56 years. Parliament is only 6% youth. Thus, the decision-makers in parliament, do not reflect the majority age of the south African populace. It was even commented that the IEC’s attempts to wet the public’s appetite for voting was uninspired and not interesting to the youth. This call for a youthful political system was lauded with the slogan ‘Its our time.’ 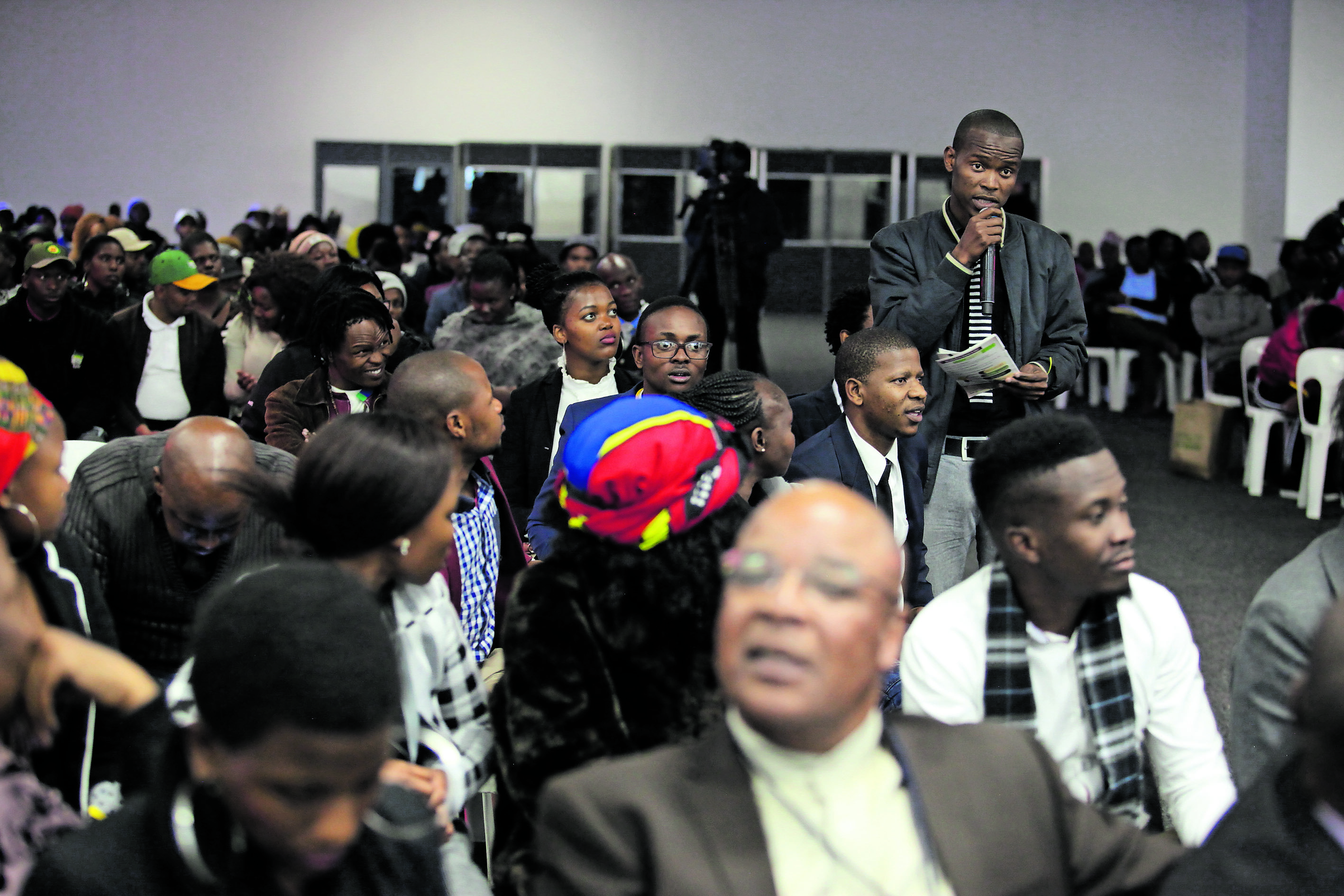 Furthermore, the call to action around voting was to consider voting as a 12th official language in South Africa, A powerful tool that could move the needle in the South African political arena. ‘ Young people have no idea how much power in communicating there is in voting, youth participation is so important, one of the panellists pointed out.’ This inability to realise their power through voting was also blamed on low voter education. This youth summit invited influential youth south africans making a change and debating the importance of voting.One of These speakers were the influential Nicolette Mashile, talk show host on SABC 1’s Daily Theta and host of the UJFM business show. After completing her qualifications in Sports Management, and in Human and Social studies, she is currently a Masters Candidate in 2018. Thato Sethe, President General of the SADC Lawyers Association and Founding Director of Educate SA, Pontsho Pilane a TEDx Johannesburg fellow and health Reporter at Mail & Guardian’s Bhekisisa where she wrote vehemently on issues of gender equality and race. Pilane has also covered prominent youth issues such as access to education, through her coverage of the #FeesMustFall protests. She has attained a Master’s Degree in Journalism and Media from Wits University. Bujy Bikwa, no stranger to the limelight as he was a contestant on Dance your butt off and the Dark N Lovely hairstyle competition, sat on the panel. Bujy Bikwa has the ear of the youth with over 9000 followers on facebook, over 30 000 on Instagram.

Voter education was cited a hinderance as many youth cannot make the connection between solving pertinent issues such as youth unemployment and access to higher education, to voting for the political party of their choice. The panellist especially Nicollete Mashile called for better voter education and more consistent conversations around the importance of voting. Nicolette mentioned ‘give us education that helps us connect voting and its value’. Part of voter education was also around making the education appealing and consumable to the youth. Pontsho Pilane cited social media such as whatsapp as an instrumental tool to communicating to the youth in large numbers. Whatsapp would also be cost effective but highly impactful in calling the youth to the voting booth.

Mashile and Bikwa also called for innovating by automating certain offering such as ensuring voter registration from the comfort of their own homes.

Bujy Bikwa was a self confessed non-voter in the previous municipal elections and and cited his lack of knowledge around municipal and national elections as a hinderance. He called on the youth to get the education they required in order to find themselves in the voting booth. He insisted that the youth also needed to take responsibility for gaining knowledge around elections. His notable words were ‘ If you understand your purpose in life, you will understand why you need to vote’

The youth on the floor spoke up around being co opted to vote and they were quite outspoken about feeling used. A comment from the floor complained that celebrities were being used to influence them to vote. The youth felt unheard and there were passionate comments such as ‘ promise after promise, no delivery’. A palpable anger and frustration electrified the room, however, the panellists and facilitators were instrumental in steering the youth to speak out through progressive channels.

There was anger over the lack of service delivery. Pontsho Pilane said that the anger was warranted and that not voting was a clear protest in itself. She cited a quote by Arundhati Roy “There’s really no such thing as the ‘voiceless’. There are only the deliberately silenced, or the preferably unheard.” Pilane established that the youth are active in the country and in politics. The youth are politically aware, ‘the problem is not that the youth are not politically active, the problem is a low voter turnout in the youth.’Pilane believes that lack of voting is clear communication in itself.

One of the strongest take homes was from Nicollete Mashile who cautioned the youth that ‘If you don’t vote, life will go on, and we will get the same results. If you don’t want to vote, be ok with the status quo remaining the same.”

One of the more informed delegates explained that political parties received more funding based on the influence they had in parliament and the number of seats they held. It demonstrated how funding had a profound effect on how the electorate were exposed to different parties. This was a call to rethink how parties are funded for elections and was an explanation of why all 140 parties on the ballot of the previous election were not fully known, only the top 5 or 6 parties.

In conclusion, the struggle for south Africa’s soul has shifted, but the youth are at the power of the solution. Go and vote, to make a difference in the country. The GPL was pleased to host an event where young South Africans spoke out but called for the youth to find progressive ways to address their issues, one of the strongest being, to vote.