I recently came across a concept called optimism bias. Ever heard of it? It’s also referred to as the “illusion of invulnerability”. Simply put, it’s the idea that bad things happen to other people, not to you.

It’s a coping mechanism employed by our brains, and I suspect it’s the very thing that high-fee-charging fund managers tap into when they sell you a retirement plan.

You sign up for a retirement annuity and gloss over the fees because you’re sure it won’t make that much difference. Or, you’re confident that your actively managed fund will sufficiently outperform the market and more than make up for the fees in the long run. But when you compare the performance of active and passive investments over time, it turns out that it’s often not the case.

The Standard & Poor’s Indices versus Active Management (Spiva) scorecard compares the performance of actively managed funds, in which managers make specific investment decisions with the goal of outperforming the investment benchmark index, and passive funds, which aim to track rather than beat the market, usually by mimicking an existing index.

The latest scorecard showed that an overwhelming majority of active fund managers underperform the market. In other words, they do worse than their passive counterparts. 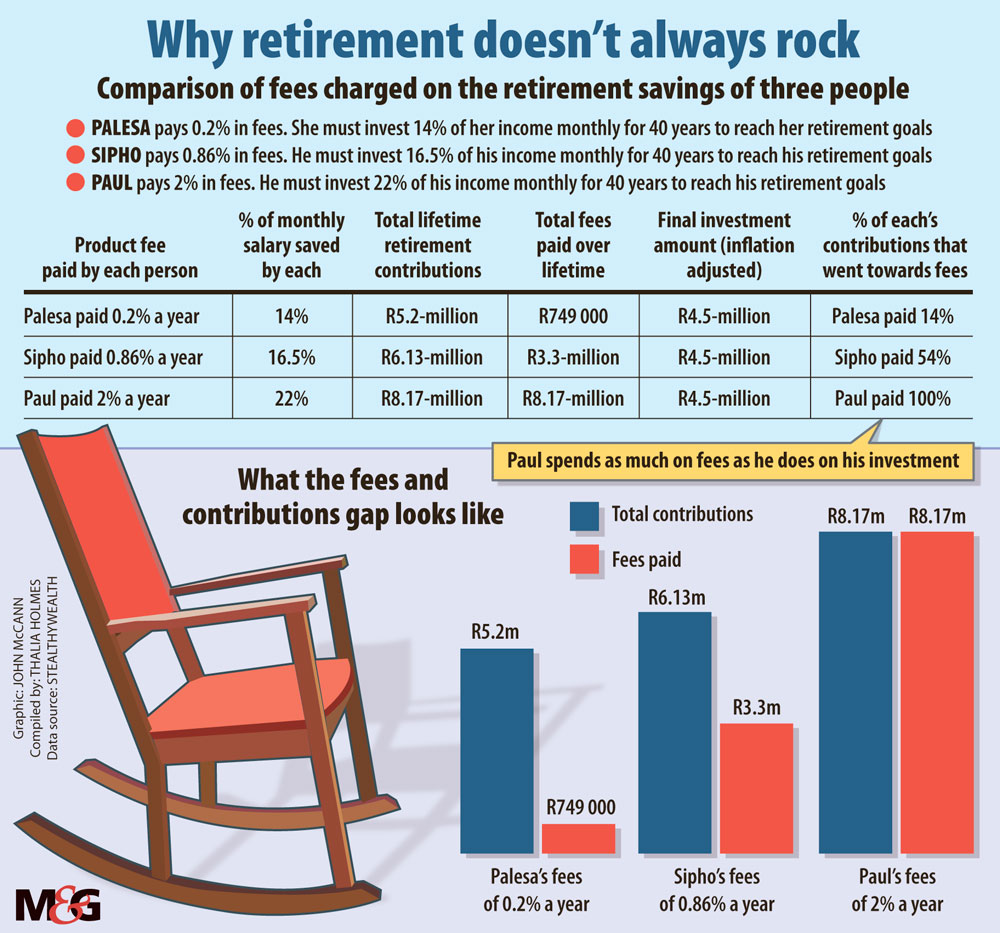 Over a five-year period, “84% of large-cap managers, 85% of mid-cap managers, and 91% of small-cap managers lagged their respective benchmarks”, according to the scorecard.

A 15-year outlook showed that active fund managers are even less likely to perform well, with only eight out of 100 large-cap managers and only four out of 100 small-cap managers outperforming the benchmark.

When you consider that active fund managers generally charge higher fees than passive funds, and that there’s a good chance that they will perform worse than the market, you start to realise the risk you’re taking when investing in active funds over the very long term.

“The risk is that the high fee may actually underperform, making for [doubly] worse [outcomes],” said Simon Brown, the founder of investment company Just One Lap.

Of course, you could pick an active fund that does really well. The problem is identifying it.

“There will always be active managers that perform well relative to passive, and this is the temptation for investors,” said Chris Rule, the head of product and client solutions at CoreShares, an investment firm that advocates passive investments.

“However, the challenge is selecting them in advance. Investors take on significant manager selection risk when doing so,” he said.

Looking at the statistics, the chances are much more likely that you’ll pick one that underperforms rather than beats the market.

Predicting the future performance of a fund is impossible. But according to the Morningstar Research Service, which published its 2018 Active/Passive Barometer in June, there’s one pre-eminent indicator — fees.

“The single largest determinant of a fund’s future success is the costs it charges,” according to Morningstar.

This seems to be a strong argument to invest in passive rather than actively managed funds. Because passive funds aim to track the market rather than beat it, your fees don’t go towards paying an active fund manager and so they’re generally lower than their active counterparts.

We have taken three scenarios — hypothetical savers currently earning R20 000 a month and saving part of their salary each month for 40 years.

We have used two rules of thumb to work out how much money our savers would need to retire comfortably. First, we used the “rule of 300”, which assumes that a person needs to save 300 times their monthly expenses to retire comfortably. Second, we assumed that our savers would draw down a monthly amount of 75% of their current salaries in retirement. (See “What the calculations were based on” regarding projected escalations)

Working on these figures, Ben Collins* from stealthywealth.co.za did some serious maths for us, and the outcomes were significant.

Palesa saves part of her salary every month for retirement. She puts her money into a passive exchange-traded fund (ETF). This tracks an index, similar to an index fund, but can be bought and sold like a share on the JSE. Palesa has shopped around and found a fund that charges 0.2%, one of the cheapest on the market. (To check out the fees charged by each ETF, visit etfsa.co.za).

Paying a fee of 0.2%, Palesa needs to invest about 14% of her income every month for the next four decades to retire comfortably, which at the start is R2 800 a month.

Like Palesa, Sipho puts his money into an ETF. But he has unwittingly opted for one of the most expensive options on the market. He pays fees of 0.86%.

To reach his retirement goals and overcome the additional fees, he will need to invest 16.5% of his income each month for 40 years. That would initially amount to R3 300.

Paul has opted to put his cash into an actively managed investment vehicle. His asset managers have assured him that the 2% fees would be more than made up for by the fund’s performance. Unfortunately, the fund only tracks the market (which means its performance is still better than most actively managed funds over the long term).

In these scenarios, our low-fee ETF investor has emerged the clear winner. But, as always, it’s not as simple as that. There are extra costs attached to ETFs that haven’t been included in our calculations. Shaun Duddy, the product development manager of Allan Gray, said: “While ETFs are generally cheaper than active funds, a number of them are not as cheap as you would think once you account for the investment management fee, transaction costs within the ETF, transaction costs to buy and sell the ETF, and other administration costs.” (See “What the calculations were based on”).

But Brown said the effect of these extra fees is relatively modest. “Passive [investment] is cheap and lower risk. You have market risk but you don’t have manager risk, and a manager underperforming the market by even just a percent or two after fees will mean a significant reduction in returns at retirement. Why take the risk? This is our retirement we’re talking about, not a bottle of wine where we can move on from one to another.”

* Ben Collins operates under this pseudonym when talking to the press

What the calculations were based on

To keep things simple, we have made several assumptions in the scenarios of Palesa, Sipho and Paul.

We assumed: inflation of 6% over a 40-year period; a return of 12% a year, compounded monthly; and that monthly salaries would increase by inflation each year and monthly contributions would be adjusted accordingly over the 40-year period.

We also assumed that each saver needed to save 300 times their monthly salary to determine the total lump sum needed.

We didn’t take the effect of tax and tax rebates into consideration. We also excluded some extra fees that are attached to exchange-traded funds (ETFs).

“The transaction costs associated with buying and selling an ETF also vary depending on the brokerage you use. As an example, the SatrixNow platform charges 0.25% (before value-added tax) to buy and 0.25% to sell, which is 0.1% per annum if invested for five years,” he said.

The EFF is not xenophobic