Both physical presence, and authenticity

How does one present a show that is expansive and yet retains coherence and intimacy? How does one curate a group show that affords each individual artist a platform that enables each artist their most authentic artistic expression? How can group shows provide space for the works to converse with each other? And how do you not fall into the trappings of lazy labelling through the stratification of artists by gender, race or geography, thereby failing to capture the depth of the work and what it seeks to communicate?

These questions are precursors to any group show.

In its own take, Stevenson Gallery is currently exhibiting Both, and, a show that opened at both gallery locations in Cape Town and Johannesburg, and will remain open until August 22 and 24 in each city respectively.

Both, and presents the work of over 50 artists represented by the gallery over a 15-year period: a montage, as it relates to the putting together of seemingly unrelated works and subjects. It is a visual representation of different artists’ respective journeys, as well as the gallery’s 15th anniversary celebration.

The exhibition is resonant — showcasing the conceptual and experimental, the abstract and the alternative, the mystic and the hyper-detailed, allowing us to contemplate works through the passage of time.

In a world that accentuates difference and honours absolutes and dichotomies, a sensitivity towards transience and non-dualism is refreshing.

In explaining their reasoning behind the title, on its website, the gallery asserts that: “The title positions this exhibition as an alternative to an ‘either/or’ way of thinking, making room for a point of view that is multiple, mutable and inclusive.”

Both, and ideologically echoes in the work of Father Richard Rohr, a celebrated ecumenical teacher who is known for his work around non-dualism.

According to Rohr, a dualistic mind cannot process complex aspects such as infinity, mystery, grace, suffering, sexuality, death or love. In Dualistic and Nondual Thinking, he writes that “non-dual consciousness is a much more holistic knowing, where your mind, heart, soul and senses are open and receptive to the moment just as it is, which allows you to love things in themselves and as themselves”.

Curators of the show, Sisipho Ngodwana and Alexander Richards — Stevenson’s newest additions to its group of directors — are further challenging the notion of a gallery having to choose between positioning itself in the global discourse (with a commitment to art history) vis-à-vis its place in the market. Both, and attunes us towards complexity and a patience for nuance. It reminds us to leave behind notions of white and black and reach towards wholeness.

Stevenson Gallery is revered for representing strong conceptual artists, valuing ideas over conventional and conservative aesthetics. The gallery’s assemblage of artists includes such iconic names as Steven Cohen, Wangechi Mutu, Penny Siopis, Wim Botha, Meschac Gaba, David Goldblatt, Dada Khanyisa, Nandipha Mntambo, Meleko Mokgosi, Zanele Muholi and more, all of whom are represented in this exhibition. A show of this magnitude triggers a profound emotional response, by pure virtue of its astonishing scope. 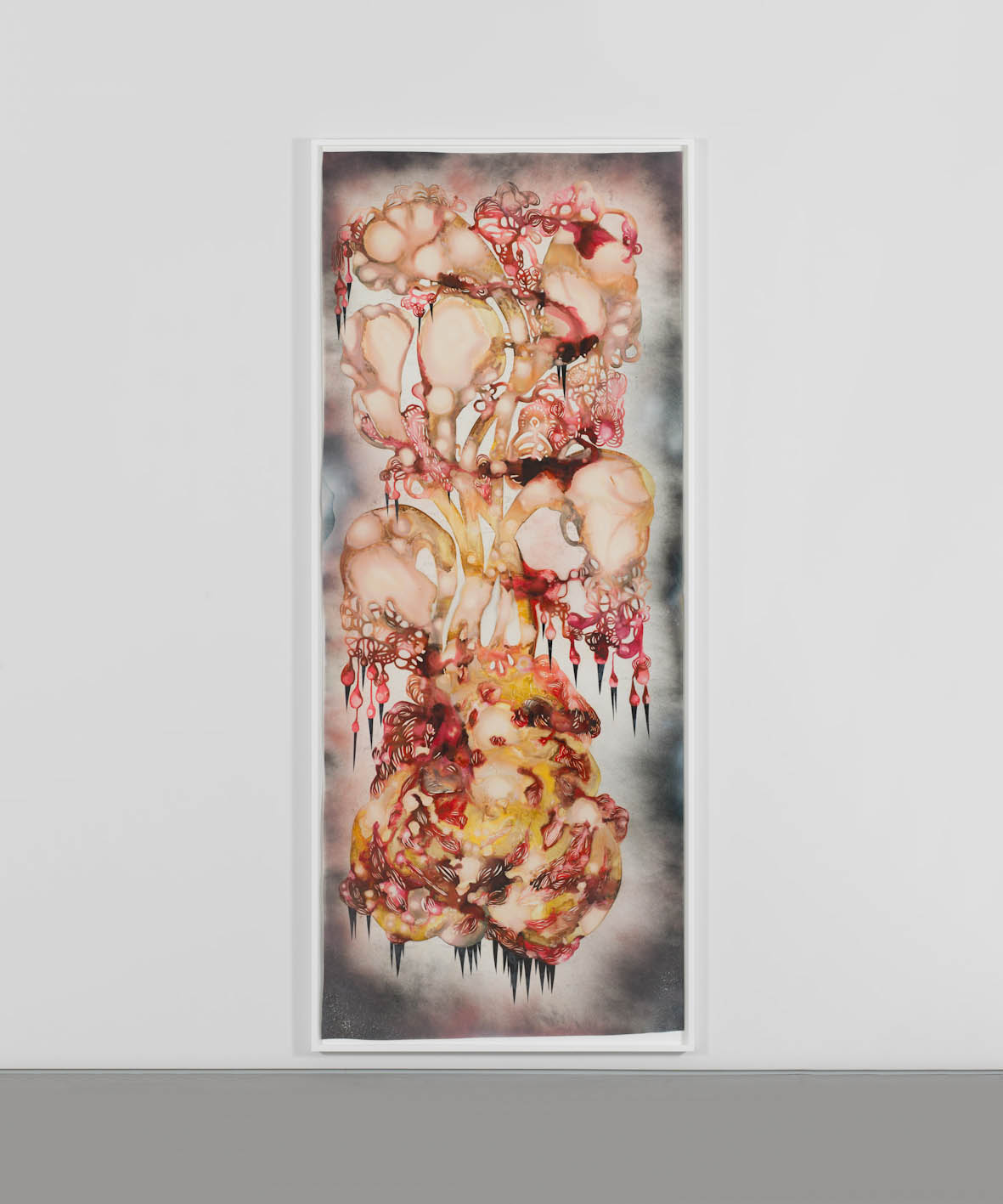 [Enigmatic: Wangechi Mutu is one of the featured artists in the group exhibition. Mutu’s collages examine identity and representation]

When a show is large and powerful, it can be overwhelming. One is always fearful of having to confront the politics of hierarchies (or perceived hierarchies) of techniques, mediums and even hierarchies assigned to artists.

In this show, the visual relationships and contrasts between each artist’s works are stark and direct. In the show’s Cape Town iteration, Muholi’s intimate portraits pull you in, and as you turn the corner, Goldblatt’s sharp photographs documenting apartheid South Africa call for your attention. Both, and flirts with these politics and therefore opens up an intriguing conversation.

We See Mama, Mummy and Mamma (Predecessor #2), an acrylic, pencil and charcoal work by Njideka Akunyili Crosby, hangs in one corner. Across the room is Kemang Wa Lehulere’s installation from his 2017 show, History Will Break Your Heart. Although seemingly unattached, both works force us to confront ideas about collective stories, memories and “at homeness”’. They are made to converse with one another. 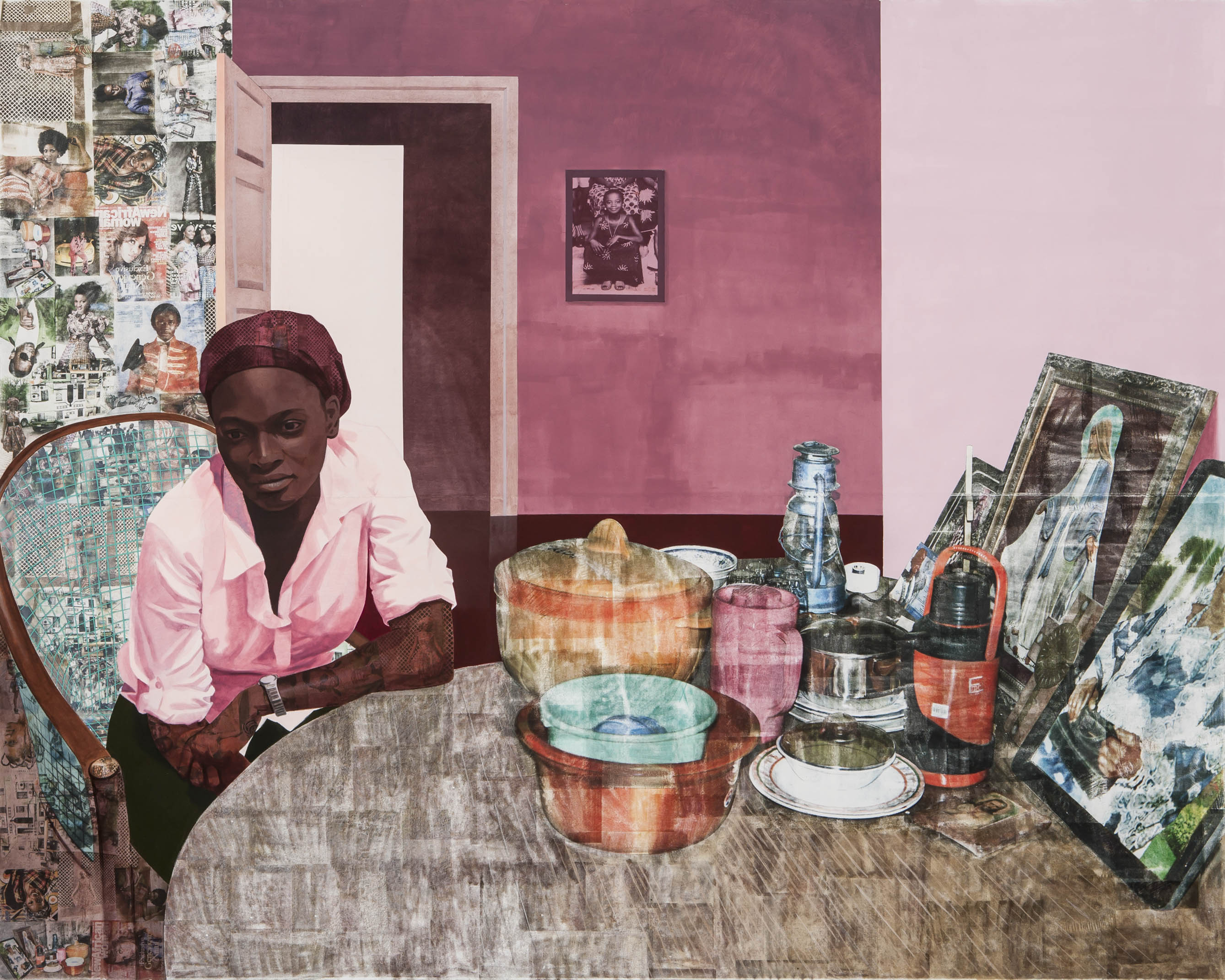 [We See Mama, Mummy and Mamma (Predecessor #2) by Njideka Akunyili Crosby (above) sits in conversation with Kemang Wa Lehulere’s installation from ‘History Will Break Your Heart’ (below)] 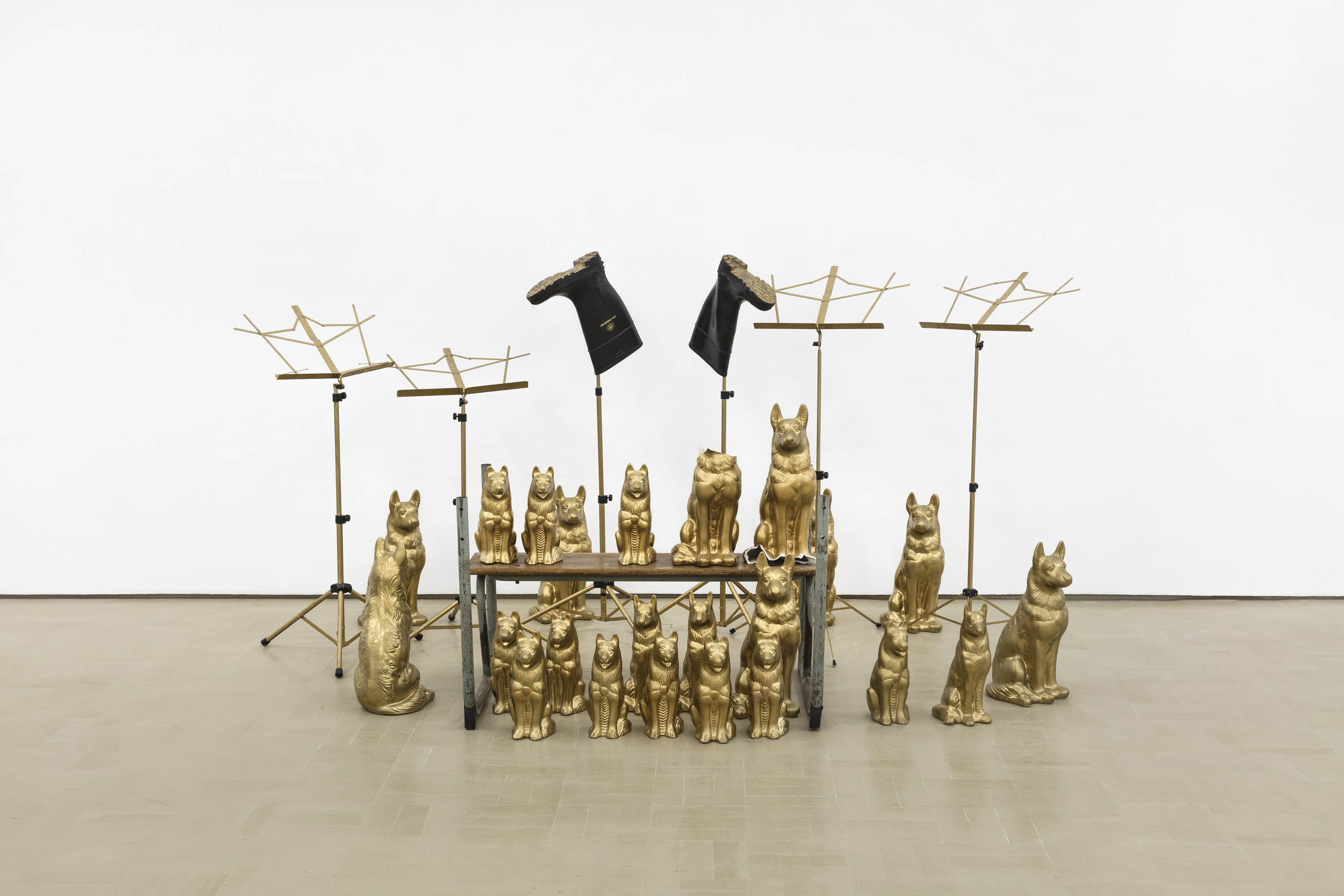 It is questionable, and hotly debated in many circles, whether white gallery walls can ever become truly inclusive and evolved. The question of whether they can become spaces that transform people’s attitudes hangs in the air. And yet within this question, and perhaps despite this question, when one sees the works of the likes of Muholi, one’s spirit lifts.

The Dark Lioness, as she is fondly known in multiple art spaces (a name inherited after her 2015 series of self- portraiture with the same name; Somnyama Ngonyama: Hail the Dark Lioness) provokes, disrupts and comforts from differing vantage points.

The installation view of the works spanning from 2003 to 2017 is enough to inspire — reminding you that the positioning of the work is not only about the potency of the images but also what they represent. With an entire room dedicated to these works, the Dark Lioness grabs you by the ankles and refuses to let go.

Muholi’s intimacy plays a game of contrasts, both from a technical aspect with the darkened images from Somnyama Ngonyama, and with the lyrical and commanding documentation of lesbian, gay, bisexual, transgender and intersex people in her ongoing project, Faces and Phases. 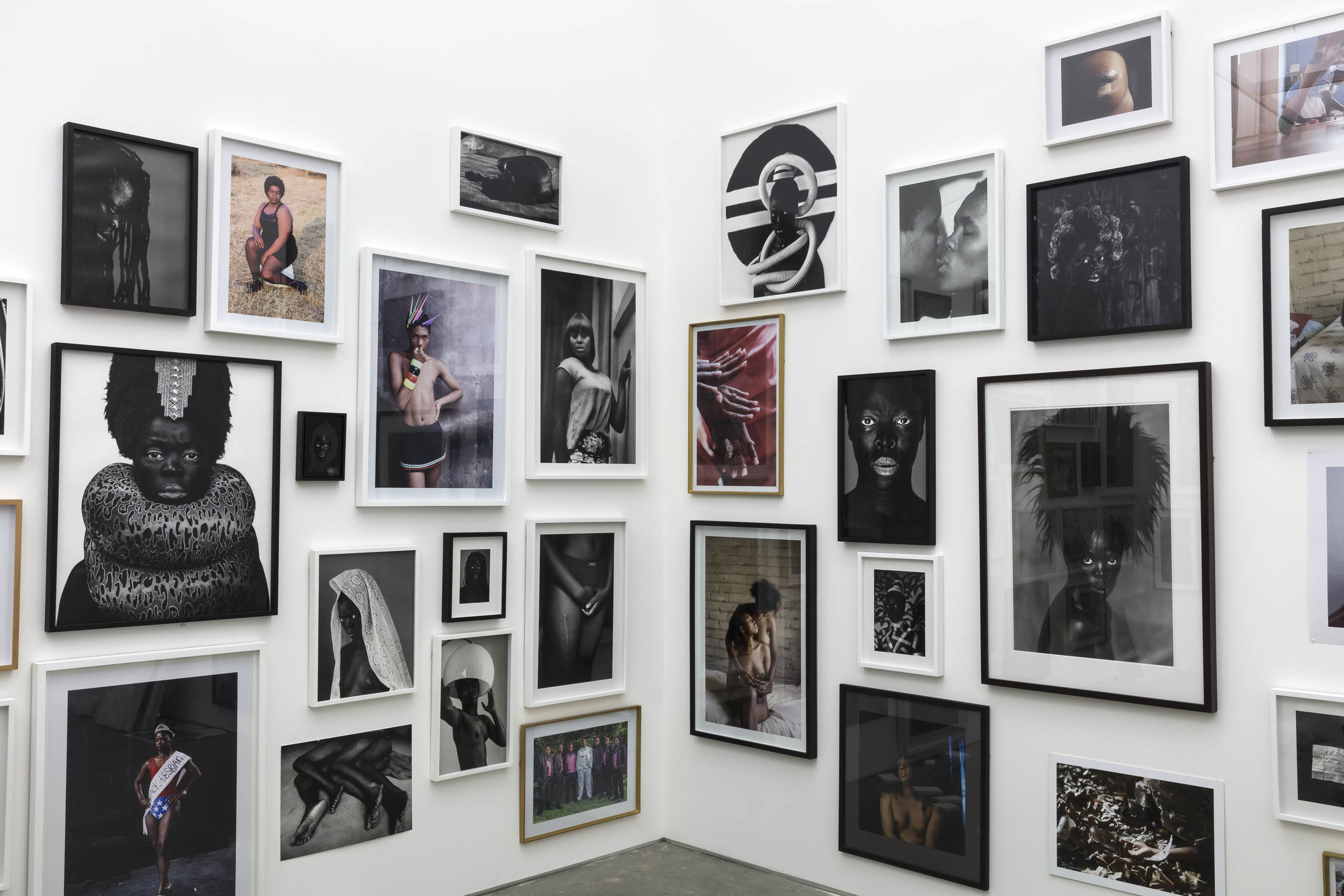 One is confronted with choices: How far or close should one stand?

The success of this show is underpinned by its diversity, a presentation of a range of artists over a multitude of media and techniques. It is held together by the strength of concepts rooted in very dense and particular voices. Bold and strong voices like that of Lerato Shadi, who, in her video project Motlhaba wa re ke namile, performs the suicidal act of eating soil — a form of resistance by slaves and ancestors.

Mysterious voices such as that of Wangechi Mutu, who grapples with identity and representation in her morphed and visceral collages, add to the exhibition’s overall feel. Confrontational and provocative voices such as that of Cohen, who, with his heartbreaking meditation on loss and absence in put your heart under your feet … and walk! asks deeply uncomfortable questions.

Both, and reminds visitors about the interconnectedness of human struggles. It is a wealth of diverse narratives distilled into one show.

One feels a spark of recognition somewhere deep within — a sense of familiarity with the work.

The show captures one’s imagination and deepens the feeling of wonder and awe. Above all, it is a celebration of narrative hybridity, complexity and multiplicity.

Both, and is on at Stevenson Cape Town and Stevenson Johannesburg until August 22 and 24 respectively.