A queer quandary: What to call kin

Moddy, Maddy, Mimi, Momo, Mumdad, Nibi or even the Japanese word for parent, Oya, were some of the gender-neutral options Thandi* and Lerato* had to refer to Chris Verster, their non binary parent. But the girls chose something more organic.

“They mostly made up their own name. They call me ‘Kiggie’,” Verster laughs. “My partner is a cisgendered female, so she is called ‘Mom’ or ‘Mamma’. But Chris is a bit of a difficult name for kids, so they just started calling me ‘Kig’, which then turned into ‘Kiggie’.”

The British-based queer rights organisation LGBT Foundation defines nonbinary people as those who “identify as either having a gender which is in-between or beyond the two categories ‘man’ and ‘woman’, as fluctuating between ‘man’ and ‘woman’, or as having no gender, either permanently or some of the time”.

Coined in the 1990s, non binary is a relatively new inclusion in our lexicon. And although the accepted pronouns for non binary people — they, them, their — have been established,it’s something of a challenge when it comes to the creation of familial terms that are gender neutral. These include mother, father, brother, sister, aunt, uncle, niece, nephew and grandparents.

“Because the existing words are largely derogatory, you would often hear people say things like, ‘If I can’t name it in isiZulu, it’s not African’. Even people who aren’t homophobic will use words like ‘isitabane’ simply because there are no other words,” says Mpumlwana.

When asked whether there has been any discussion about finding terms for nonbinary family members, Mpumlwana laughs: “Oh my gosh, you’re right. This is not something we have explored yet.”

Offering some possible terms in isiXhosa, however, Mpumlwana suggests umntana wase khaya (a child from home) — also colloquially used as mntase or mntasekhaya — as a gender-neutral option for sibling.

Mpumlwana adds that searching for gender-neutral family names is “definitely something [Find New Words] will be tackling”.

“We will start engaging people on this and hopefully find some solution to this,” she says.

Although the search for terms in African languages might only just be kicking off, numerous websites and chat forums have been thrashing out possible English suggestions.

“Pibling” and “parling” (conflations of parent and sibling), “arntul”, “auncle” and “uncee” are being put forward as gender-neutral options for aunt or uncle. For those who have non binary siblings, “nibling” or “quibling” (queer and sibling) are possible options.

Nonbinary grandparents are not left out in the linguistic cold either, with “grandy” being one of the comparatively few suggestions.

The options for grandparents may be limited but some young parents are hoping to ensure that future generations are not forced into gender binaries they may later not feel comfortable with.

Published in July this year, an NBC News report brought attention to an increasing, albeit still relatively small, number of parents choosing to raise “theybies” — “children … brought up without gender designation from birth”.

Parents who raise “theybies” do not disclose the biological sex of their children to anyone — including the children, who “are not taught to associate those body parts with being a boy or girl”.

“If no one knows a child’s sex, these parents theorise, the child can’t be pigeonholed into gender stereotypes,” the article notes, adding: “[These] parents want to foster an environment of openness where the [children] feel loved whether they grow up to identify as LGBTQ [lesbian, gay, bisexual, transgender and queer] or not.”

Although Verster identifies as non binary, raising theybies was not the route they chose to take.

“We were more traditional, in fact,” they say. “We kind of just went with what the doctors identified at birth. We weren’t very into the idea of them wearing a certain colour or playing with certain toys, but we saw them both as girls. They’re really young so we don’t want to have to go into the politics of all that with them. I don’t think it would be good for them.”

Verster adds, however, that one of their daughters has started questioning her gender.

“She was about three at the time when she started identifying at times as a boy, at times as a girl. But I think it was more about how she sees herself and how she lives out her gender in the world. We just allowed that … to give my child the space to figure out for herself who she wants to be, so that when she is old enough, she can make up her own mind.” 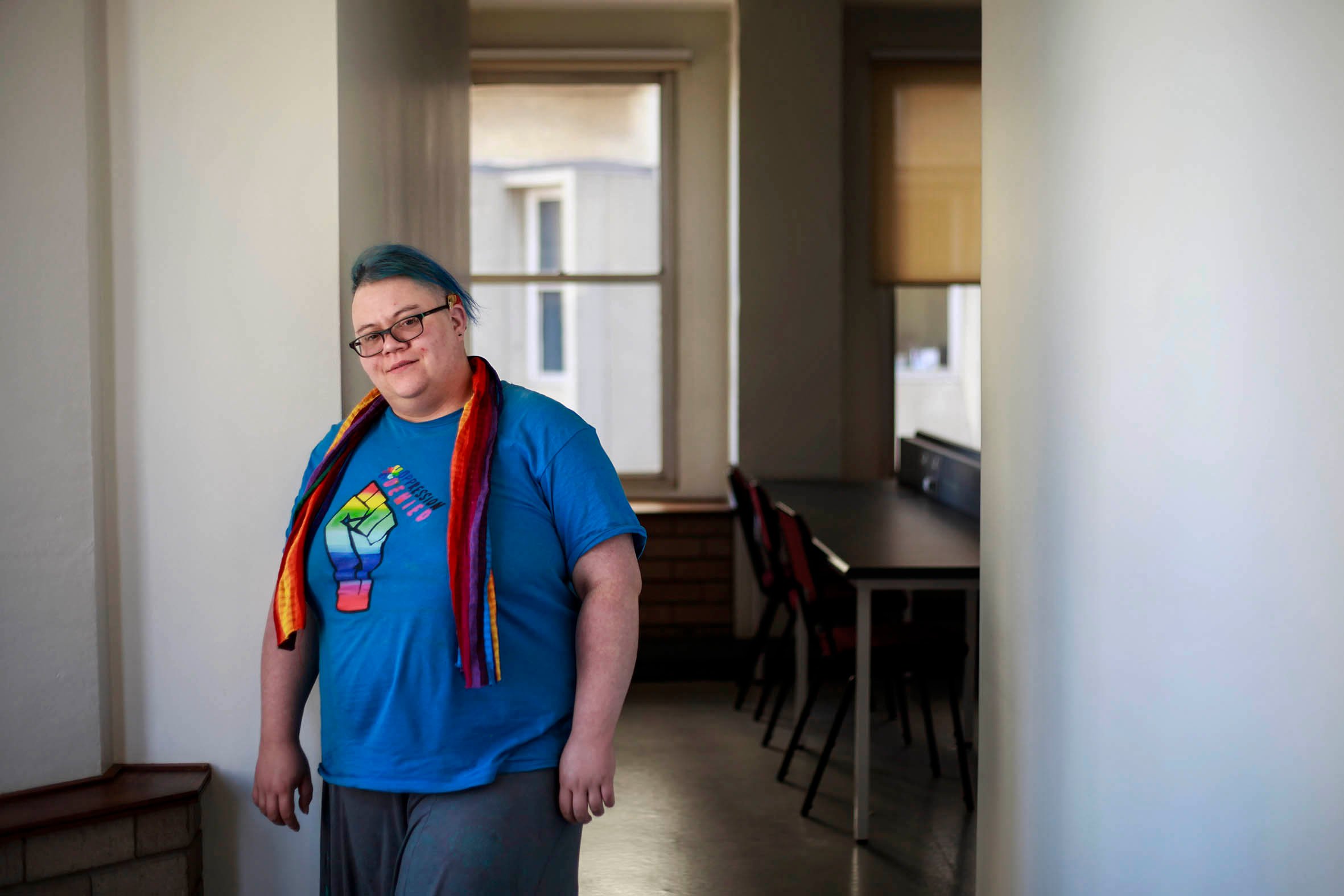 [Activist Tish Lumos says it is ‘not fun’ to be called by the wrong pronoun or name and that the search for new words is an opportunity to accommodate all types of families. (Oupa Nkosi/M&G)]

“I have friends who have struggled a lot with family acceptance. Many of them have been disowned by families, kicked out of home, treated like garbage and cut off financially and socially. In our circle, we have this kinship — because we have all faced the same kinds of discrimination — and one of the things we do is refer to each other as ‘siblings’. Or ‘sibs’ for short,” says Lumos.

For Lumos, the search for new words is “an opportunity to say, ‘Well, gender binaries don’t work, so let’s find new ways to discuss the people we care about in our lives’.”

“There are some lovely combinations of words,” they add. “In Spanish, for example, ‘tía’ is aunt and ‘tío’ is uncle. Those collide and become ‘títí’. There are many really, really awesome intersections.”

For Mpumlwana, finding gender-neutral ways with which to refer to non binary family members is “very, very necessary”.

“Society is pretty much a construction of families, so we really need to have these words in our family structures. It’s all good and well to find inoffensive words for gay and lesbian, but if you are non binary, you also need to find words for your family to relate to you without dehumanising you by misgendering you,” she says.

Lumos agrees. “It’s something that [to others] might seem silly or funny but for somebody who is nonbinary, I can honestly say that every time you get called by the wrong pronoun or the wrong name or misgendered, it’s not something that is fun. It’s really important for queer people to find spaces in which we bend the constraints of things like language to accommodate people who don’t fit into those binaries. It’s affirming to be in spaces where those kinds of phrases and language and terms are used.”

An affirming space is what Verster is hoping to create for their daughter.

“If one day, she came to me and said she is gender nonconforming, I would ask them what they would prefer to be called. It is not for me to identify them. For myself, if somebody wants to understand my gender identity, rather ask me and I can explain where I am coming from and the words I feel comfortable with. So I dare not impose anything on others, if I don’t want to be imposed on. I need to have respect for my child.”

As to whether their daughter knows that they identify as non binary, Verster says: “When she started sometimes identifying as a boy, she would say, ‘I’m a girl and a boy.’Later, she came up to me and asked me if I am a boy or a girl — or a boy and a girl. I just said, ‘I am a boy and a girl; I don’t really mind. In the end I’m just your Kiggie.’”

* Not their real names.
Carl Collison is the Other Foundation’s Rainbow Fellow at the Mail & Guardian

Shining a light on lesbian experiences in Nigeria