The boy who walked again

Bangui — ‘I was in a church, and then it all happened. It was a rocket,” says Jeovahni Mongounou.

The attack he is describing took place in March 2014, when Jeovahni was 10 years old. His country, the Central African Republic (CAR), was entering the second year of a civil war that is still being fought today. Much of the violence manifested along religious lines; churches and mosques have frequently been targeted by armed groups.

This time, it was Jeovahni’s church in the capital Bangui under attack. Several people died in the explosion. He blacked out. “I fell unconscious, and I don’t remember anything.” When he finally regained consciousness, he’d lost both his legs.

He had no reason to think he would ever walk again.

The health system of the CAR has never been great and the conflict has left it in ruins. The few doctors and nurses who remain at their posts are rarely trained or paid, hospitals struggle to get basic supplies and facilities run by international nongovernmental organisations can only treat the most basic complaints and the most urgent cases. There was no facility that could give Jeovahni the specialist treatment he needed.

“I felt really helpless,” says his mother Danly Lydie. “I saw him crawling on the floor. We had no money to help him.”

The family live in a one-room house made of mud bricks and corrugated iron, in a village on the outskirts of Bangui. The dirt road to get there is pot-holed and treacherous, and it took hours to push Jeovahni in his wheelchair to the nearby school. Inevitably, his education suffered, as did his social life — it was difficult to visit his friends and it’s hard to play football with no legs.

He is far from being the only amputee suffering because of inadequate medical care, although no one knows exactly how many people in the CAR are missing limbs because reliable statistics are almost impossible to come by.

“It’s a huge number,” says Guenther Schuelein, a German specialist who has spent his career managing prosthetics centres all over the world, including Ethiopia, Saudi Arabia, Pakistan, Morocco, Azerbaijan, Angola, Bolivia and Guatemala. He says the CAR is among the most difficult environments in which he has worked.

Schuelein arrived in Bangui last year to set up the Physical Rehabilitation Project, which specialises in prosthetics and orthotics. It occupies small premises in central Bangui, in what was previously a mechanic’s workshop. Staff members are trained to make prostheses — the first time that artificial limbs have been manufactured in the CAR. Trained
technicians measure and shape artificial limbs from sheets of olive-green polyethylene. 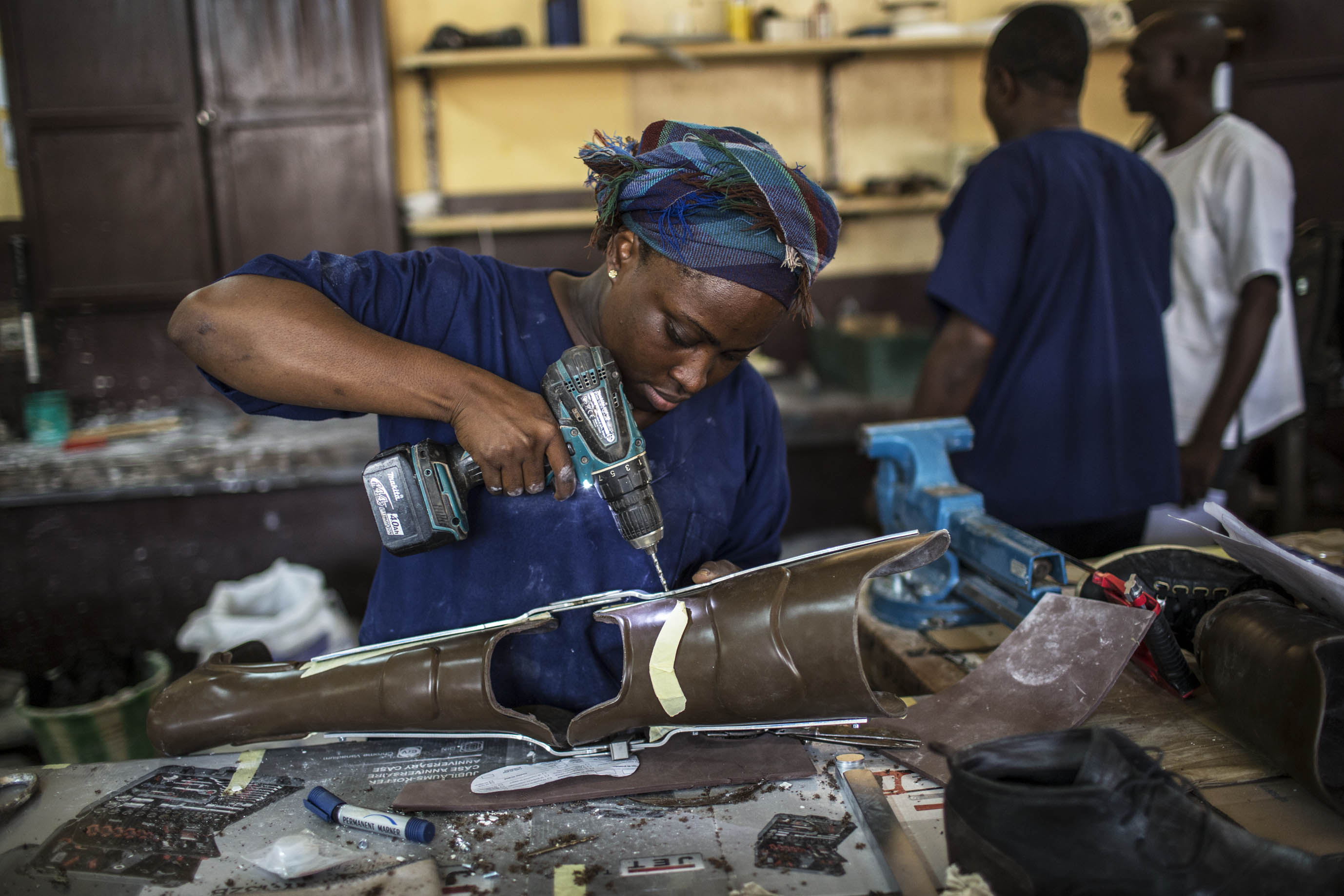 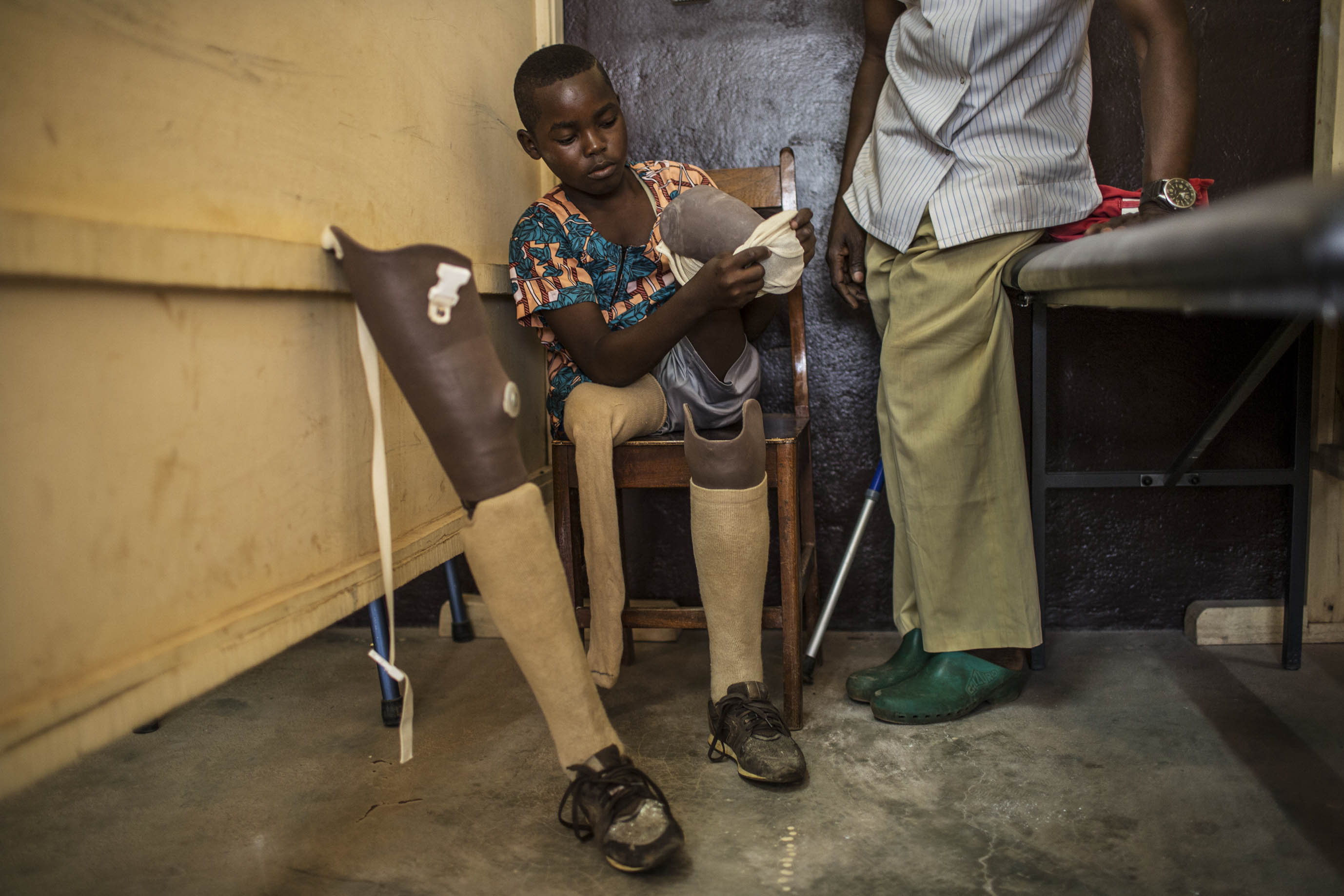 “It’s amazing how technology has changed over the years. It used to be artisanal; we would make foot joints, knee joints ourselves. Now you get the prefabricated joints. We can produce a lot of limbs with that technology,” says Schuelein.

The project is officially the government’s but is run by the International Committee of the Red Cross. This year, 212 patients received physical rehabilitation services, including the delivery of 65 prostheses and 44 orthoses. “We actually try to keep a low profile; we can’t have thousands of people descend on us. We can’t have more than five people here at once,” says Schuelein. There are plans to move the project to a larger site. Jeovahni was among the patients treated this year. Three operations prepared his body for the prosthetics; everything went smoothly.

He can now attach his new legs by himself, and can walk without crutches — though he’s still a little wobbly. “I’m so happy. I thank God for keeping me in his view, so I can go on and study and work like everyone else,” he says.

Juvenal Baganito (29) knows what Jeovahni is going through. He lost a leg in a car accident when he was 12. It was another decade before he was able to receive a prosthetic.

The experience of receiving a new leg was so transformational for him that he decided to dedicate his life to helping others in the same situation. He now works at the Physical Rehabilitation Project, helping to manufacture the prosthetics, and providing support to patients like Jeovahni.

He’s got some advice for Jeovahni: “At first it hurts a little; you have to adapt. But struggle on because it allows you to have a life and do everything. Being physically handicapped does not mean you are mentally handicapped. Now you have to live life to the full.”

That’s exactly what Jeovahni wants to do. He’s going to return to school and would like one day to become a doctor — but only if his first choice of career doesn’t pan out. “I want to be Messi.” he says.

This story was written as part of Uncovering Security, a media skills development programme run by the Thomson Reuters Foundation, Stanley Foundation and Gerda Henkel Stiftung. Photography by Will Baxter commissioned by the Stanley Foundation.