Political parties in South Africa share a few distinct features and policy similarities. They might emphasise different aspects of it, based on their manifestos, but they are essentially variants offering more of the same.

They share other features too. They are internally divided, have weak leadership and their internal divisions affect their external relations. The overriding commonality, however, is the pursuit of power for its own sake, or the use of public power as a means to serve private ends.

Is this uniform elite-driven dynamic coincidental, or can it be explained?

In part, parties have not kept pace with changes in society. The immediate post-apartheid consensus has evaporated and parties are struggling to grasp the new realities and to forge something that appeals to voters.

After a period of stabilisation and transition (1990-1994), democratisation and state building (1998-2000), and consolidation, development and delivery (2000-2008), they appear to offer a series of oft-repeated but anachronistic platitudes. The period since then, with the election of Jacob Zuma to the presidency of the ANC in 2007 and, in 2009, to that of the country, was ostensibly meant to fill the gap inherited from previous post-democratic dispensations and usher in a period of “adaptive autonomy”. This would have required all the bureaucratic power, developmental policy and democratic praxis of the first democratic decade aligning with appropriate policy and public service practice to execute solutions to society’s challenges.

The old political mantras have become staid as the electorate’s demographic base has shifted from older to younger people. There has been some upward social mobility and the class structure has changed, but this has happened along with economic decline and de-industrialisation. The legacy of poverty, inequality, unemployment — especially among the youth — and civic immorality (such as criminality and overt racism) persists. But it is articulated differently, animating new forms under changed conditions.

Political parties intuit rather than actually comprehend these changes and, therefore, appear incapable of offering appropriate solutions. Existing factions in parties are further overlaid by groupings in parties experimenting with new ideas and policy proposals, which exacerbate existing tensions and lead to new inter-party rivalries. This experimental phase heightens tensions and might explain the party’s realignments, as they seek common ground to shore up each other’s immediate and narrow political interests.

Some people in the parties might be seeking solutions to complex problems, but they are in a minority. This explains the fragile and fluid coalitions in the post-2016 local government elections era and the political fission as they begin to compete for support in the lead up to the 2019 elections.

These dynamics are aggravated by the breakdown of hitherto natural constituencies now pursuing diverse and divergent interests. The old predictable constituencies and bases of support can no longer be relied upon. As voting behaviour is changing and new social interests have formed, parties appear ambiguous in their appeal to these new interest groups, who have new and different needs and demands.

Since parties are in the business of pursuing power, and because they are failing to capture power with clichés appealing to old constituencies, the uncertainty they spawn is what they exploit in order to exercise influence. This politicised uncertainty is problematic because it does not grasp the nature of social realities and it operates in the sphere of self-manufactured crises, proposing imagined solutions to self-defined social realities rather than objective ones.

This cycle of self-defined problems and imaginary solutions to socioeconomic challenges further isolates parties from society and voters. Worse still, parties import this self-referential mode of operation and the echo chambers that accompany them into the institutional realm. This affects government and policy implementation, since policy is removed from actual citizen needs.

In this morass, parties pursue multiple and sometimes incongruous aims in order to remain relevant. In doing so, they have unpredictable internal battles over ideology and identity, manifesting in contradictory mixed messages and platitudes that are offered to citizens. These myopic policy precepts start to inhabit institutions, rendering them dysfunctional.

To wit, the Democratic Alliance’s prevarication and inconsistency on policy with respect to black economic empowerment (BEE), race-based redress, the nature and shape of the economy and policy on municipal entities. 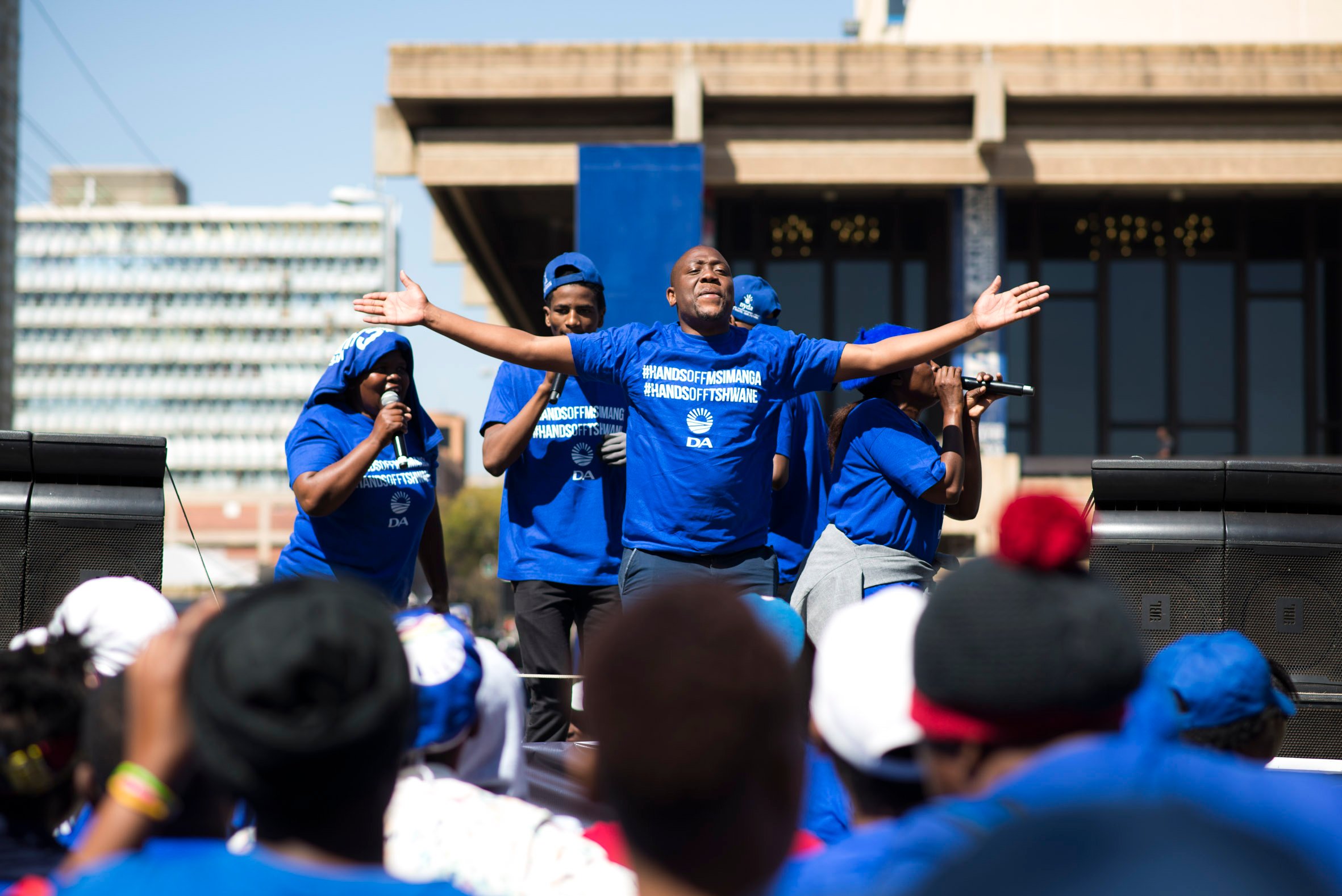 This extends to the DA’s inconsistency in the application of its own internal rules, procedures and disciplinary processes. It frequently disciplines and dismisses members who do not toe the party line at local level, while protecting high-profile party members who are equally guilty of ill-discipline and political indiscretion. This is a manifest betrayal of its own liberal pedigree.

Furthermore, these dynamics expose an indecisive leadership style that vacillates between populist and principled factions in the party. The DA is characterised by a style of leadership that tries to build support by being inoffensive to any of the power blocs and brokers in its ranks.

In its approach to partnership and coalitions, the DA tries to subsume its partners and consolidate its hold on power.

Other parties fare no better.

With no discernible political strategy, besides a hodge-podge ensemble of ideology, the Economic Freedom Fighters flip-flop from issue to issue and often proffer inchoate and rhetorical demands rather than policies.

On the land issue, the party offers the absurdity of state ownership with privately held title to buildings. Depending on who the EFF is speaking to, and depending on who speaks on its behalf, it either wishes to change the Constitution or protect it, or it resorts to crude racial stereotypes, either vilifying whites and Indians, or defending them. Its race-baiting politics serves only to further polarise a society already riven by cleavage.

Worse still is its approach to institutions, in which it exists, it appears, merely to destabilise them under the guise of providing “leadership”. It, in effect, mimics a colonial mentality, which divides society through fear and undermines finely crafted post-apartheid democratic indigenous institutions and their rules and procedures.

The EFF’s approach to partnerships at municipal level betrays its political promiscuity and the naked desire for the spoils of power and influence.

The ANC is not immune from any of these modes of political behaviour. It lacks a fidelity to its own founding principles, rules and policies, as well as its members. More importantly, the ANC lacks fidelity to the citizenry on behalf of whom it governs. Everyone exercising state power and involved in state capture on behalf of the ANC is curiously disowned by the ANC but happens to be a deployee of the same party.

In all cases of state corruption and state capture, there has not been a single internal disciplinary process and no activation of its own integrity commission to enforce accountability. Because of the factional dynamics in the ANC, its leadership is unable to discipline perpetrators of malfeasance and provide the ANC with a clear vision going into the 2019 elections.

Despite having an elaborate policy-making regime, the ANC appears at sixes and sevens over crafting a coherent policy path going forward. Examples of this are its ambivalence over amendments to section 25 of the Constitution and the extent of land expropriation without compensation.

It is also unable to take responsibility for a quarter century of policy weaknesses and state failure because of its inappropriate and unethical political and policy strategy and public service management.

Even micro-parties like Bantu Holomisa’s United Democratic Movement are not immune from this political syndrome —nor, it would appear, are the other small, niche and special-interest parties. They exist in a whimsical relation of dependence on any one of the larger parties.

The implications of this for democratic and inclusive development are overwhelmingly negative in that schizophrenic parties, pursuing self-referential policies in detached institutions, are not responsive to citizen needs. As citizens withdraw from political and public life, they create their own survival mechanisms in alternative service provision organisations, which, in turn, give rise to other forms of politics.

This leads to greater informalisation where power and authority are exercised in novel, but increasingly coercive and destructive, modes.

The proliferation of spaza shops, informal traders and informal markets, stokvels and vigilantism demonstrates how the informalisation of the economy renders public institutions and public governance hollow.

Public institutions and the parties that populate them must reinvent themselves in a way that captures the social imagination of citizens and responds to their aspirations. After all, public power and public office ought not to be pursued for its own sake.

Unless parties reform and stabilise, politicised uncertainty will expand and greater informalisation and ungovernability will take root. Associational life will likely retreat into primordial identity social formations, with competition and conflict based on the aggregation of informal power and authority, and the influence of criminal organisation.

Political trends globally, in Africa in particular, are replete with examples of this. The popular adage, “You will fall for anything if you don’t stand for something”, has never been truer.

If parties follow the trajectory they are on —that of fickle, shifting identities and ideology —they will end up aggregating narrow interests rather than social ones. The ensuing political fragmentation, social fracture and state predation will ultimately rob citizens of an effective choice and the establishment of a legitimate popular will.

Ebrahim Fakir
Ebrahim Fakir is the director of programmes at the Auwal Socio Economic Research Institute (ASRI), and member of the board of directors of Afesis-corplan, a nongovernmental organisation in the Eastern Cape. He is also a member of the advisory council of the Council for the Advancement of the South African Constitution
Facebook
Twitter
WhatsApp
Linkedin