‘Can I just call it a space? Perhaps it’s a mixture of a gallery, a studio and a project space. I don’t know the actual answer to this question yet.”

It is just after 09:30 on a Thursday morning and this is the first thing fine artist Banele Khoza says when asked what he would call his new creative space.

At the beginning of August, the artist opened BKhz in the former home of design company Dokter and Misses at 68 Juta Street in Braamfontein, suddenly becoming neighbours with the Stevenson contemporary art gallery. In turn, Dokter and Misses moved to a design precinct down the road at 99 Juta.

In the six weeks since Khoza moved in to 68 Juta Street,BKhz has become part gallery, part studio and a meeting place where the door is open to all those curious enough to come inside, look at the work and make friends.

From Hlatikulu to the world

For the first half of his life, Khoza lived in Hlatikulu, a small town in eSwatiniwith a population of about 2748 people. While flipping through fashion magazines in his teens, he developed a liking for fashion and began eyeing it as his career of choice. In 2008 he moved to South Africa and completed his schooling in Pretoria. After that he enrolled at the then London International School of Fashion in Pretoria, now called Leaders in the Science of Fashion.Heleft after a year and registeredfor a fine arts degree at the Tshwane University of Technology (TUT) in 2012, where the spectrum of his creativity was widened and nourished by exposure to more diverse forms of thearts. After completing his BTech, Khoza lectureddrawing and art theory at TUT from 2016 to2017.

The 24-year-old’s most established mode of art is painting —mostly a mixture of watercolour, ink or charcoal and digital painting to draw the abstract figures in his works. 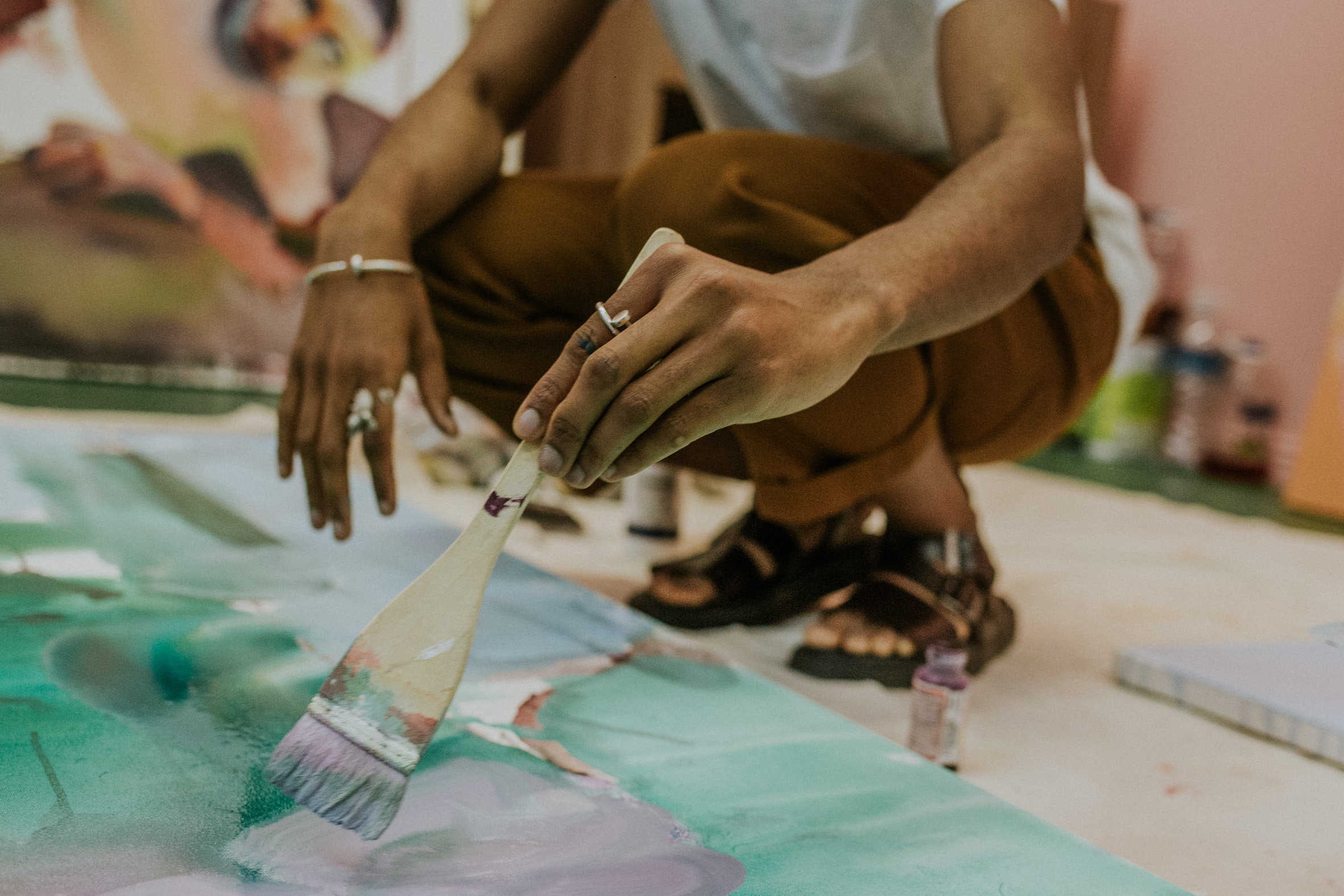 BKhz is fitted with Khoza’s paintings and collages. The canvases sit on walls painted in tones of blush and coral pink, turquoise and violet that gently encourage people to look inside, almost as if it’s a storefront. Although art is showcased throughout BKhz, it does not feel like a conventional gallery. 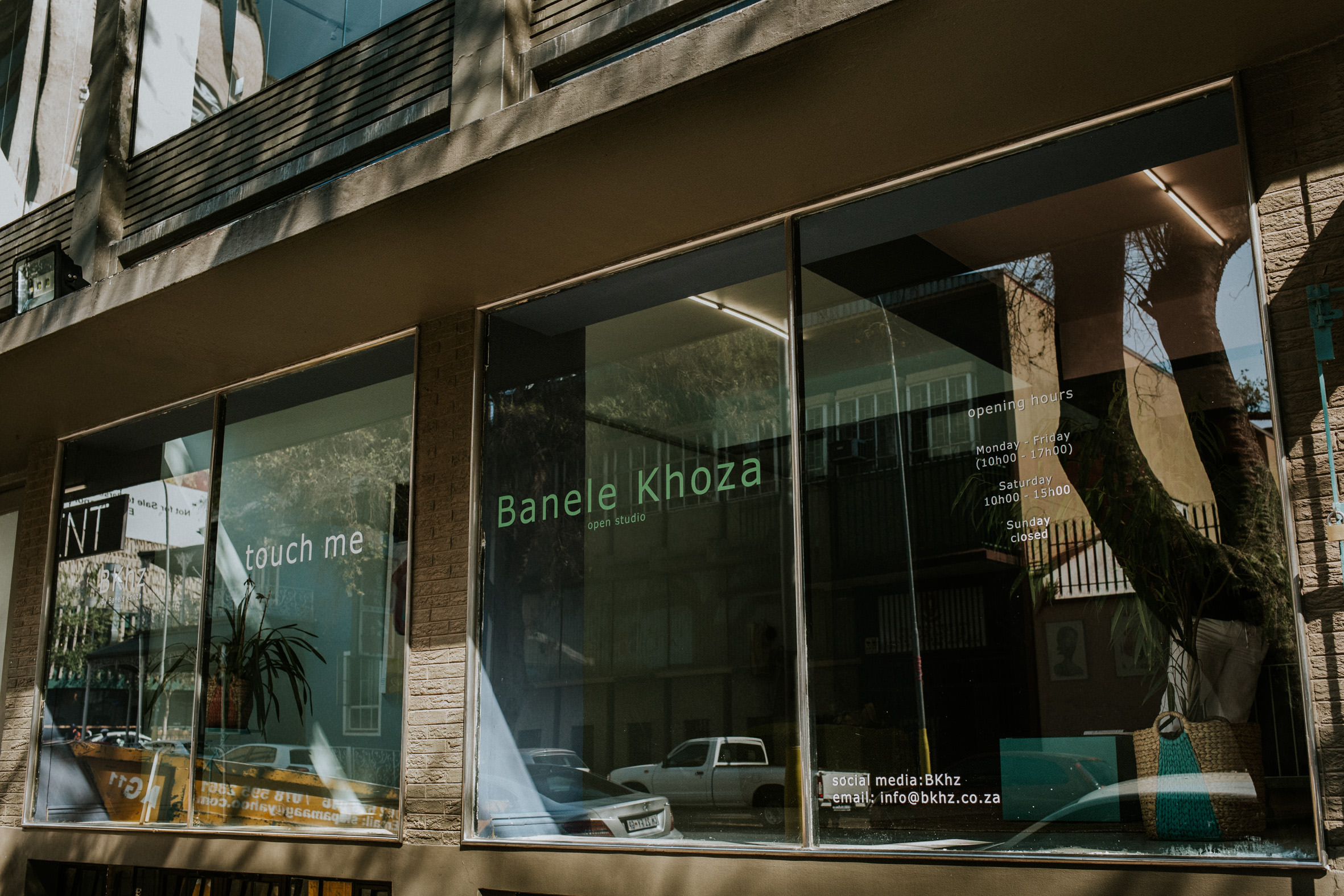 His artwork includes the series Temporary Feelings (2016) and Lonely Nights, which were exhibited at arts fairs in South Africa, the Pretoria Art Museum, Zeitz MOCAA and the Galerie des Galeries in Paris. In Third Party, from the series Love? (2017), water-like figures exist in a context where they have room to sensually bleed into their surroundings with minimal inhibitions. In Note Making (2017) he uses cutoffs from handwritten letters to lovers and notes from his journals. His uninhibited drawing style collides beautifully with ideas of sexual agency, vulnerability and the continued building and reconstruing of character of a person in their twenties. 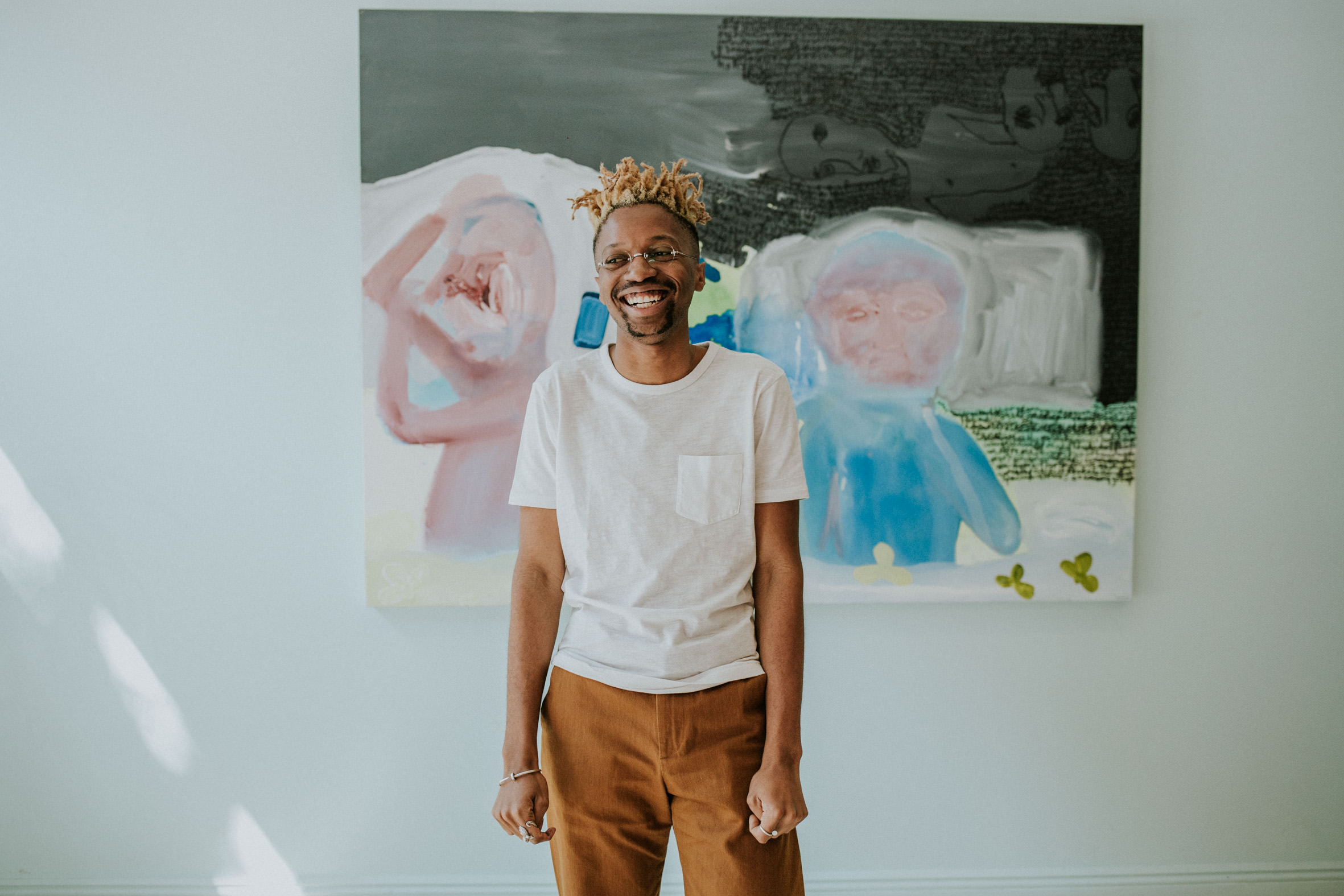 [Third Party is one of the works on display at BKhz (Photo: Renata Larroyd)]

His work has won him several awards and grants such as ascholarship from the Reserve Bank of South Africaand the Gerard Sekoto Foundation award. The latter afforded him a three-month residency at theCité Internationale des Arts in Paris during 2018.

While juggling living abroad and painting vociferously while studying and teaching, Khoza was sketching the idea of having a more concrete creative home.

“I have been saving for the past five years. This is a God-given space. It is a place of love before it is a gallery or a studio. It is a home for myself and everyone who walks into it. People come first.”

BKhz fulfills Khoza’s need to create at his own pace while opening up the process to the public as a way of giving back what he was given by his encounters in the art world — opportunities that aren’t necessarily available to all his peers.

I spend most of my morning on a forest green leather couch, in the open plan area, with Khoza. Behind us are multiple frames with excerpts from Khoza’s journals surrounding a television monitor displaying his work.

The open plan area also has a reception section, a bookshelf where he keeps custom-made tote bags and a large green bean bag. This space will be used to exhibit other artists’ work alongside Khoza’s as well as to host formal and informal talks and gatherings.

Behind this clean facade is the more dynamic studio space where canvases are on the floor, against the walls, hung on the walls and one on a stand. There are several palettes, jars with cloudy water, brushes and a vase with five wilting sunflowers. Khoza also has a studio at his home in Queenswood, Pretoria, but his work space at BKhz brings a new meaning to the idea of an open studio — it gives visitors and audiences more access to the art, the artist and the process of making art making than is usual.

So far, so good

In terms of staying afloat Khoza says:“I think I was lucky with rent because it isn’t too high. I don’t have that pressure to always be selling. Plus my work has enough interest to attract buyers through my social media presence. I’m handling the sales of my works right now. I also work with galleries on a project basis. For example, I’m working with Absa gallery for my next travelling exhibition and curatorial project.”

Khoza says his dream is coming to life; since its opening last month, BKhz has not gone a day without curious foot traffic. “People come in to visit almost everyday. I realised that it’s almost an escape for them because they can just hang out.”

As if to prove this, a person walks past the window twice. The second time he has a puzzled look on his face and asks what this space is before Khoza beckons him to come in. The curious stranger hesitates before coming in and speaking to the artist.He is followed by two more visitors.

“I think people are visiting for several reasons. It’s because I’m an artist [who is] also being relatable and because of how relaxed it is. We’re not just trying to sell people art. We’re trying to make friends,”says Khoza.

Is it safe to have your art and space so accessible to anybody? In contrast, the neighbouring Stevenson is gated and there is a security guard at the entrance. Visitors have to declare themselves to an intercom before the buzzing gate allows them to enter the gallery.

Khoza’s open-door policy contrasts that of conventional studio practices. Unlike other artists, who hand-pick who can come into their studios, Khoza’s is open to everyone.

Given the debate in the art world about increasing people’s access to artists’ works and excludingthe middlemen, why hasn’t a model such as Khoza’s been used by more established local artists? Or has it? And is being concerned about the institutional survival of this space a case of looking a gift horse in the mouth?