Angola: The fall of the Dos Santos clan

The news hit like a bomb in Luanda: Jose Filomeno dos Santos, the son of former president Jose Eduardo dos Santos, was arrested on Monday in Luanda and is now in custody. The list of allegations against him is long: among other things, it includes the formation of a criminal organisation, illegal enrichment, money laundering and corruption, according to the Angolan prosecutor.

The authorities are also examining whether overseas transfers of $500-million were lawful, as instructed by President dos Santos during his time as Chairman of the Fundo Soberano de Angola (FSDEA), the country’s sovereign wealth fund. ‘Zenu,’ as Jose Filomeno dos Santos is known in Angola, has fallen deeply from favour.

Only three years ago, he was positioned as a possible successor to his father as president. However this so-called “dynastic solution” did not materialise. Instead, former Defence Minister João Lourenço prevailed over the committee of the ruling People’s Movement for the Liberation of Angola (MPLA). On September 26, 2017, Lourenço took over as president of Angola, as well as president of the MPLA.

During his first year in office, it already became apparent that Lourenço was serious about fighting Angola’s susceptibility towards personality cults, nepotism and corruption. He swiftly replaced several provincial governors, ministers and senior officials, as well as positions in state enterprises which were largely filled by close confidants or family members of his predecessor. One of his first notable acts as president was to dismiss the former president’s daughter, Isabel dos Santos, as head of state oil company, Sonangol.

Lourenço also announced the termination of a number of contracts the Angolan state had with companies linked to the Dos Santos clan. Zenu dos Santos was dismissed in January this year as head of the $5-billion government oil fund. Shortly afterwards the prosecutor began investigations and a formal indictment and remand eventually followed.

How serious is Lourenço?

“It’s crazy. A year ago a development like this would not have been considered possible,” Angolan lawyer Nelson Domingos told DW. And it’s not just the Dos Santos family who are being held to account, stresses Domingos. Last week, the former president of the Angolan central bank, Valter Filipe, was formally charged with money laundering. Domingos believes Lourenço and his people are determined to break apart Angola’s old, corrupt structures and go about re-building it strategically, step-by-step.

But political analyst and journalist Alexandre Solombe thinks only time will tell whether or not they’re successful. “It’s still too early to reach a final conclusion,” he told DW. It’s important to remember that the fight against corruption in Angola is nothing new.

“In the 1990s, during the second party congress, [the issue of corruption] was put on the agenda of the MPLA party, which was then under the leadership of Dos Santos,” says Solombe. “But the whole thing turned out to be just a flash in the pan.” Solombe believes the recent arrest of Zenu dos Santos does not mean the fight against corruption has been won.

Many other members of Angolan civil society share his scepticism. Human rights lawyer Zola Bambi fears that Lourenço might be tempted to replace the so-called “Dos Santos Kleptocracy” with a new one of his own making. 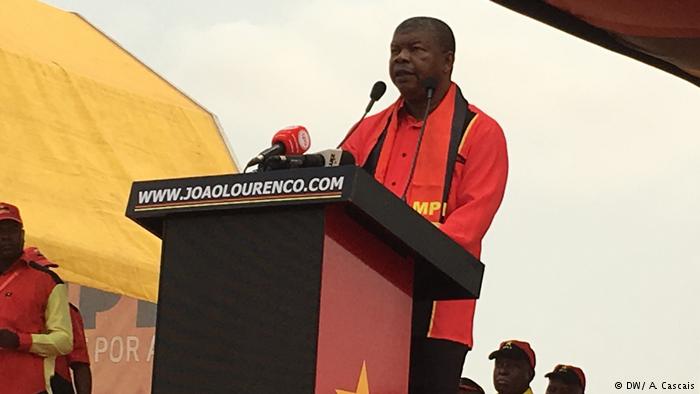 “Our constitutional system transfers too much power to the executive, that is, the president and his government,” Bambi told DW. “In Angola, the president is almost on the same level as an emperor.” Bambi believes there is a very real danger that Lourenço will employ the same methods of governance as his predecessor did.

For almost four decades, the Dos Santos family determined the political and economic destinies of Angola. Son Zenu dos Santos, born in 1978, launched his career under his father’s reign. In 2008 he founded Angola’s first private investment bank, Banco Kwanza Invest. At the same time, he also set up the African Innovation Foundation based in Zurich, which claims to “promote and support projects for the sustainable development of countries on the African continent.” The foundation quickly found itself in the crosshairs of the Swiss public prosecutors office: it began an investigation based on suspicion of money laundering, but ended the investigation shortly after.

In 2013 — at the age of 35 — Zenu’s father entrusted him with the management of the FSDEA, the state-owned wealth fund. Half of the money — approximately $2.5-billion — was transferred to financial services provider, Quantum Global, for management. The company was founded by Swiss-Angolan Jean-Claude Bastos de Morais, who also has a close personal relationship with Zenu dos Santos. The former president of the Deutsche Bundesbank, Ernst Welteke, was also a business partner of Zenu’s for many years.

The eldest daughter of the former president, Isabel dos Santos, was able to build a huge corporate empire in just a few short years and rose up the ranks to become the “richest woman in Africa,” according to Forbes. She has interests in hundreds of companies in various sectors, including telecommunications, the diamond trade, tourism, real estate — in Angola, Portugal and a number of other countries.

Shortly after her father left office, Isabel dos Santos was removed as chairwoman of the state oil company Sonangol by Lourenço. Its business relationships with many private companies within the state were subsequently examined, leading to the cancellation of several contracts by the Angolan government.

Isabel dos Santos has now found herself in the firing line of the Angolan judiciary. The Angolan Procuratorate is now investigating whether the lucrative contracts it concluded with the state during the reign of her father were appropriately transparent.

Incidentally, Isabel dos Santos has been spending more and more time abroad in recent months. More recently, she has been flying back and forth between Lisbon and London — though she claims it is purely for business reasons.

“After the arrest of Zenu dos Santos, she will probably think twice before she flies back to Luanda,” says Solombe. — Additional reporting by Nadia Issufo