Catch Jo’burg Pride before it falls

There were safety concerns, says ­Nozipho Polly Poswayo. “We were so nervous. Truly, let me tell you. It was nerve-wracking.”

Still, the members of Glow — the Gay and Lesbian Organisation of the Witwatersrand — together with other activists organised what was to be the first Johannesburg Pride march. “We were really driven by the vision to go out there and make our footprint in the fight for our rights,” she says of Glow, its much loved “commander-in-chief”, Simon Nkoli, and the rest of the organisers.

That day, in October 1990, Poswayo donned her black and pink Glow T-shirt, a pair of tight jeans, an enormous headpiece made of ­balloons (“it was so huge and so flamboyant”) and high-heels (“I always march in heels”) and took to the streets of the city centre.

Along with nearly 800 other people — some covering their heads so as not to be identified — Poswayo proceeded through the streets of Hillbrow, eventually ending at Pieter Roos Park, all the while defiantly holding aloft her “Homophobia Must Go” poster.

“That march was very historic for all of us,” she says. “Then, it was a political struggle for LGBTI [lesbian, gay, bisexual, transgender, and intersex] people. Also, we were protesting legal discrimination against LGBTI people. Equality before the law was the key thing.”

Close on three decades later, queer rights are by now firmly enshrined in South Africa’s Constitution. Although Poswayo should be proud of the annual queer rights event she is disillusioned.

“Johannesburg Pride has lost its way. I don’t believe it is inclusive. For example, the event doesn’t ­target certain people. The location is important, because you want everybody to participate,” says the 49-year-old.

Poswayo is speaking of Melrose Arch, the affluent residential and shopping district where, for the past four years, Johannesburg Pride has taken place.

But Kaye Ally, Johannesburg Pride chairperson, says that, because “Johannesburg Pride remains an unfunded NPC [nonprofit company], Melrose Arch has been ­generous for four years in a row with a venue sponsorship”.

Countering Poswayo, Ally adds: “Pride at Melrose was attended by people from all walks of life, with a message of no barrier to entry and aspirations.”

Kicking off this year’s march, an emcee shouts: “We are not afraid to be our authentic selves” from the stage, competing with the thumping, if cheesy, beats of a remix of Queen’s I Want to Break Free.

Participants are lining up to walk the few blocks out of the precinct, on to the main road, and back in. The march lasts no longer than 30 minutes. In and among the dizzying number of rainbow flag outfits and accessories — bow ties, balloons, tutus, umbrellas — one can occasionally spot someone wearing an African print something. The event is, after all, often billed as “the Pride of Africa”.

Originally from Zimbabwe, Thandeka Mukuku has been ­living in Johannesburg for just on two years. This is her first time at Johannesburg Pride.

“I can’t help but feel relieved to be walking in a march like this and know that I am not going to be arrested,” she says, comparing South Africa’s stance with her home country’s on queer rights. “I feel very privileged right now. It’s like I have to keep reminding myself that it’s okay to keep marching. Because the people back home I am representing by walking here … they don’t have this,” she says as a marcher slinks past us, his Instagram handle printed on the back of his T-shirt.

Photo-op frivolity becomes apparent when, at one point, marshalls stop the march, shouting: “It’s time for pictures.” A few minutes later, pictures having been snapped and uploaded on to various social media platforms, the march continues. 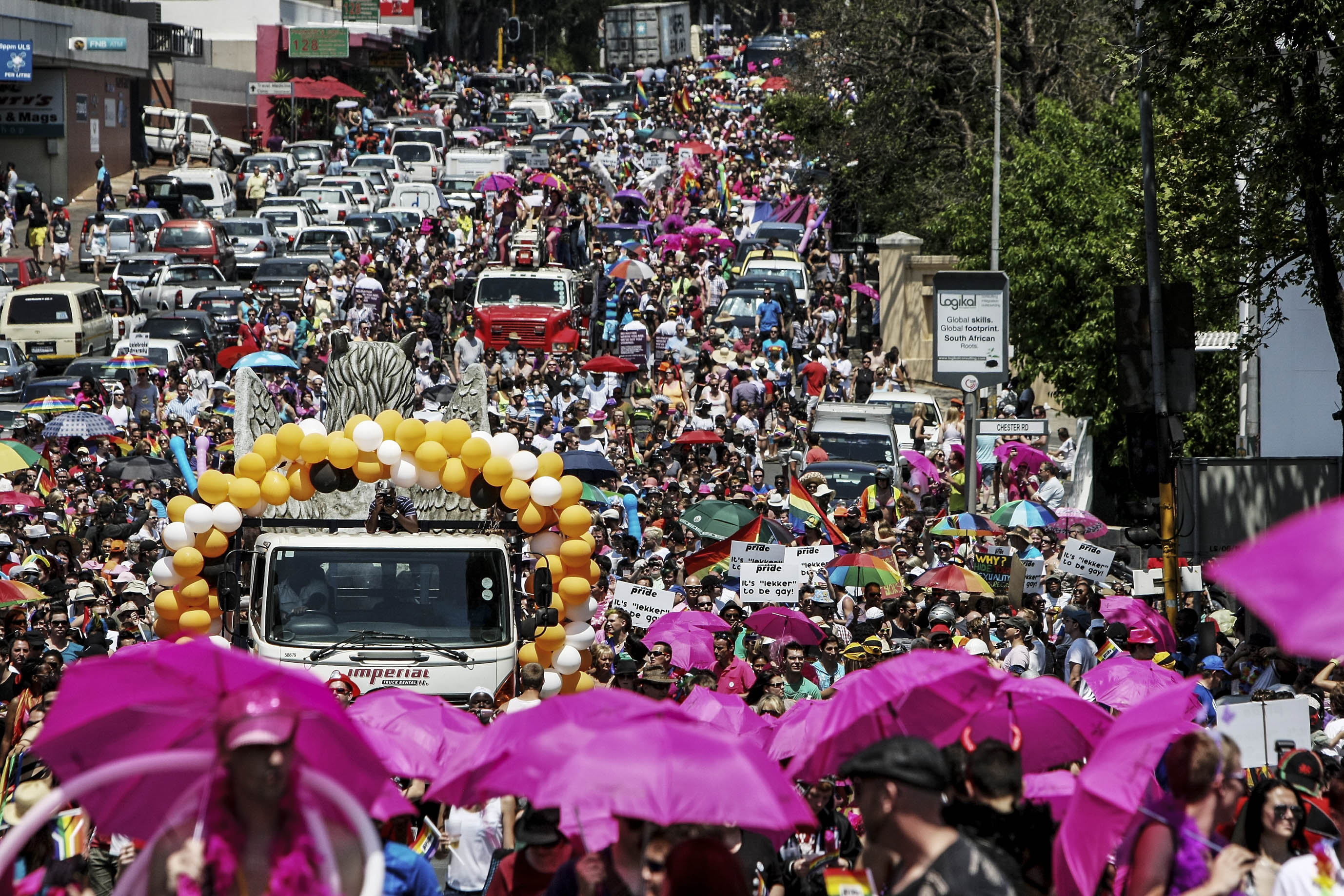 There is irony in this pause for pics. In 2012, activists mobilised by the One in Nine Campaign demanded the procession pause for a minute of silence to highlight the increasing number of lesbians, particularly in townships, being murdered and falling victim to what is called “corrective rape”. Not only was their demand not met, but violence ensued.

Human rights activist Thokozani Ndaba was among the group of protesters. “The organisers started beating us up, hitting us and telling us we must go back to the townships. ‘Go back to Soweto, where you belong,’ they were saying. It was painful because Pride was one of the things that’s supposed to unite us.”

Luiz de Barros is the editor of the queer publication Mamba Online. He was also there on the day Jo’burg’s queer community came to blows with itself.

Although he admits: “I don’t really know what happened there on the day or behind the scenes,” in the run-up to the clash, he says that what played a part was civil society organisations criticising from the sidelines. 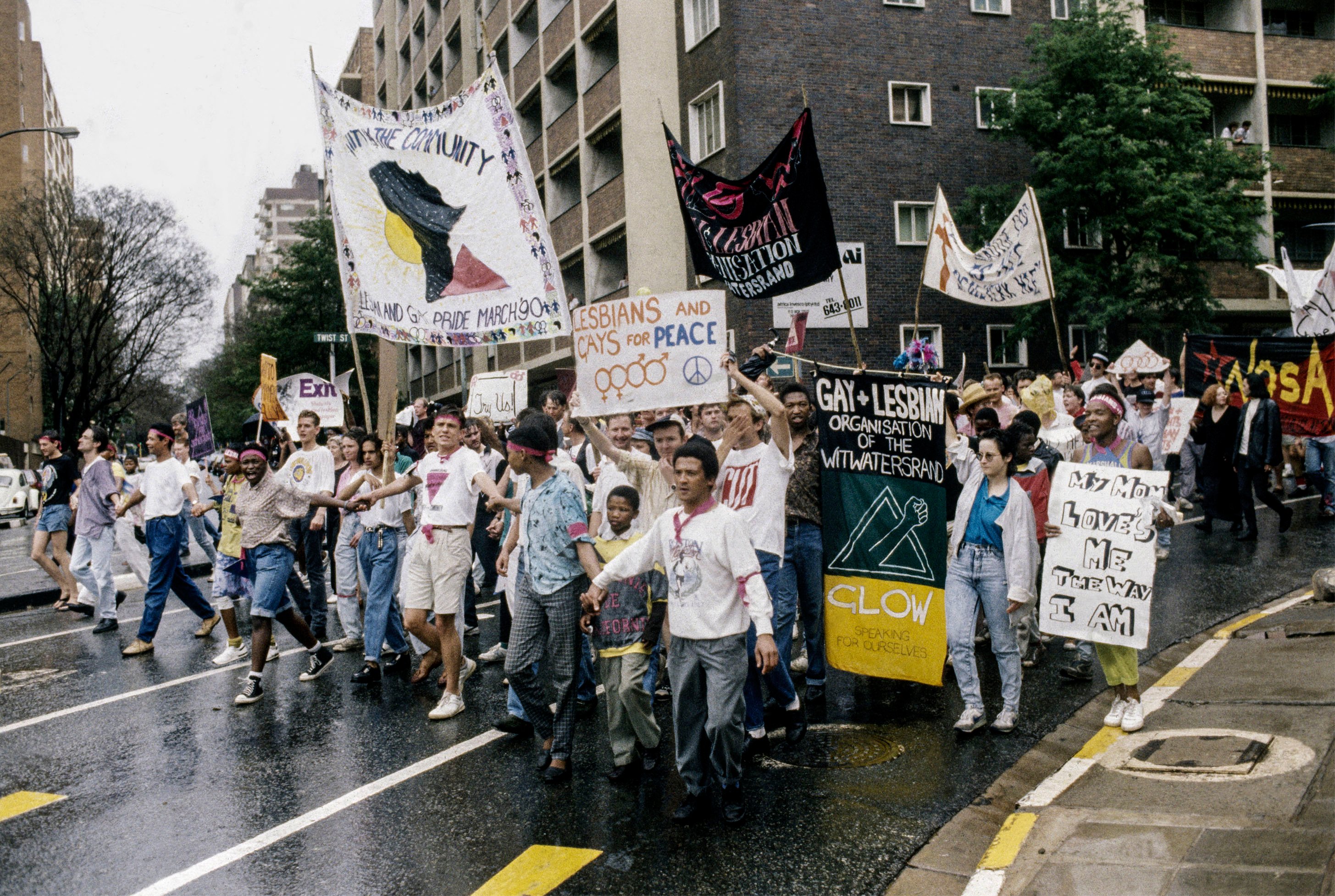 From 2006 to 2010, De Barros was part of the Pride board, half of which was then made up of members of civil society. But, he says, “the NGOs [nongovernmental organisations]were just not coming to the party. They would not come to meetings and were not really contributing. And for me that is what lead to the decline of that board. And I blame civil society for this. I felt that they were being armchair critics.”

By the time he left the board in 2010, there were no civil society representatives on it. “The people who remained, their focus was on putting the event together. That was their strength and what they were focusing on, because Pride became a behemoth. It was massive, so it was a full-time thing managing this thing. I think there was also growing resentment [among them] that the community was being very ­critical all the time, yet they weren’t participating.”

He says that Pride “still has a place”, but adds: “What is lacking for me is purpose and a political stance on issues. There are so many issues to be raised, from everyday discrimination to hate crimes to religious intolerance. The march has become a weak shadow of its former self.”

De Barros also takes issue with political messages being ­“woefully neglected” and the seemingly increasing corporatisation of the event.

“Look, I don’t have a problem with corporate entities playing a part and showing support. The reality is that LGBTI people work in those companies. But it needs to be balanced. It is problematic to have a corporate entity at the front of the parade.”

He is referring to the march’s lead banner, sponsored by global management consulting company Accenture.

Jarred Daniels is the head of the company’s South African division of the Pride Network.

“Johannesburg Pride presents us with an opportunity to reach out and show that at Accenture we do value inclusivity and diversity. So, we wanted to use the platform to say that we are supporting Pride and that we are here to assist any clients that would like to mature their LGBT practices. Also, to show that we are proud to be an organisation that is so inclusive,” says Daniels.

Countering criticism of the prominence of such corporate messaging, Daniels says: “A lot of [the] LGBT community work for corporates. Also, a lot of our time is spent in working environments. Also, a lot of the events that took place over the past couple of days were sponsored by corporates. I don’t think they would have been as enabled if the corporates didn’t sponsor them. There is a lot of value we all bring — individuals, civil society, corporates — in working together. I don’t think anything works in isolation.”

Ally holds firm that the event has “a policy of inclusion that transcends into the corporates as well as political parties and service-based NGOs, but more the community. The communities reached goes far beyond political messaging.”

READ MORE: Whiteness on the march: An open letter to Cape Town Pride

Poswayo is not convinced. “For me, Jo’burg Pride today is like people just wanting their businesses to be known. I feel we should go back to the basics, you know? Like,

what is Pride for? What is the meaning of Pride? How should it be embodied?”

For De Barros, the reimagining of this almost three-decades-old institution can only come about if “we all take responsibility. It seems that we, as a community, are not too interested in marching and making statements. Many of us have the capacity to create a placard or have, I don’t know, a piece of fucking cardboard with a message on it. And to be more aggressive in terms of the issues we want to raise, but we’re not really doing it.

“Most of us are not marching at Pride events — all the Prides are reflecting this. As a community, what we seem to want to do is party. So we all play a part in this. My feeling is that we all need to take collective responsibility for where Pride is and what we want it to be.”