The discreet sham of Justin Trudeau

“The world is a very dangerous place,” quipped the pre-eminent US Philosopher-King of the Twitter age, Donald J Trump, in a recent encomium in which he managed to exonerate Saudi Arabia for butchering one of their dissident journalists and blame Iran for everything evil in this world.

I could not agree more with President Trump. The world is indeed a very dangerous place — all the more so for being ruled by clinically delusional psychopaths.

But are these psychopaths, ranging from Donald Trump to Benjamin Netanyahu to Mohammed bin Salman to Rodrigo Duterte to many others, the causes or the consequences of the historical maladies we now live through?

For this not to become the proverbial chicken-and-egg question but actually help us decipher our time, we need to compare world sociopaths like Donald Trump with their supposed opposites like Barack Obama or — now that he is gone — the newest sweetheart poster boy of neoliberal politics, Canadian Prime Minister Justin Trudeau.

The purpose of the exercise is not to judge who is better or who is worse. The point is to place both sides of the majority’s political preferences in a larger, more, urgent, frame of reference and see how we are actually at the mercy of their similarities rather than the beneficiary of their differences.

Whitewashing one crime with another

One quick look at Justin Trudeau’s recent pronouncements on the Boycott Divestment Sanctions (BDS) movement, for example, shows how the twisted fact and fantasy of Zionism and its settler colony have driven liberal world leaders like him utterly incoherent if not, in fact, insane.

Recently, Justin Trudeau made an effort to apologise on behalf of Canadians for the atrocious fact that Canada rejected a ship carrying some 900 Jewish refugees running away from the murderous Nazis in 1939. Historians believe, “more than 250 of these passengers were later killed in Nazi death camps after the MS St Louis was forced to return to Europe.”

“We apologise to the 907 German Jews aboard the St Louis, as well as their families,” Trudeau said. “We are sorry for the callousness of Canada’s response. We are sorry for not apologising sooner.” This was a necessary apology, though slightly too little and much too late for the victims and survivors of the callous act that cost the lives of so many innocent people.

Such politically motivated “apologies” ring entirely vacuous and hollow. Nevertheless, they contribute to the collective awareness and documentation of the murderous course of Europe’s Holocaust and the refusal of other “Western” countries to act as a haven for those running away from it.

But this was not where Trudeau’s disingenuous apology ended. His true colours as a career opportunist politician soon emerged when he said: “Anti-Semitism is far too present. Jewish students still feel unwelcomed and uncomfortable on some of our colleges and university campuses because of BDS-related intimidation.” This is where he exposed the dishonest roots of his sham apology, where one atrocity was committed to whitewash another.

What is BDS and what does it have to do with the murderous act of Canada aiding and abetting the Nazis by refusing entry to desperate Jews running away from genocide in Germany and the rest of Europe? The BDS movement for Palestinian human rights was launched by dozens of Palestinian civil society groups in 2005. It calls for a non-violent act of civil disobedience – on the model of a similar movement in South Africa – seeking to pressure the Israeli settler colony to end its prolonged, sustained and expanding occupation of Palestine so Palestinian refugees can return to their homeland.

What sane human being would see any connection whatsoever between that peaceful, modest, gesture to restore the most basic human rights of a nation against a gargantuan military colony and the genocidal act of the European Holocaust and the Canadian racist refusal of sanctuary to Jews running away from that genocide?

Trudeau paid the price of his dishonest and disingenuous apology with the inalienable rights of yet another people at the receiving end of yet another egregious criminal act, this time perpetrated not by the Nazis against Jews but by Israelis against Palestinians.

What decent human being would try to whitewash one criminal act with another criminal act? Justin Trudeau did: the cute and cuddly sweetheart of North American liberal neo-colonialism.

A true apology for the Canadian refusal to help Jews escape from the Nazis would be helping Palestinians sustain their non-violent BDS movement to regain the dignity of their place in their own homeland.

As in all other cases, there is a consistency with the political charlatanism of politicians like Trudeau. “The Canadian prime minister presents himself as a climate hero,” we learn from an article in the Guardian by Bill McKibben, but “by promising to nationalise the Kinder Morgan pipeline, he reveals his true self.”

McKibben’s wording is precise: “In case anyone wondered, this is how the world ends: with the cutest, progressivest, boybandiest leader in the world going fully in the tank for the oil industry.”

I am no longer sure what the word “progressive” means any more in the context of North American politics. But in McKibben’s words, Justin Trudeau is indeed “the boybandiest” boy this side of the Atlantic. And yet, we are coaxed to turn a blind eye to his terrorising politics by looking at his handsome smile.

At issue here is Trudeau’s plan to “nationalise the Kinder Morgan pipeline running from the tar sands of Alberta to the tidewater of British Columbia,” a project that First Nations and environmentalists oppose for the obvious catastrophic dangers it poses to human life. Trudeau takes the same liberty with the environment that he takes with Palestinians as human beings entitled to their liberty.

Let us consider a bit of math that McKibben offers and keep it in mind next time we seeTrudeau running half naked in the streets for his morning jog and we are tempted to tell ourselves that it’s not just a publicity stunt: 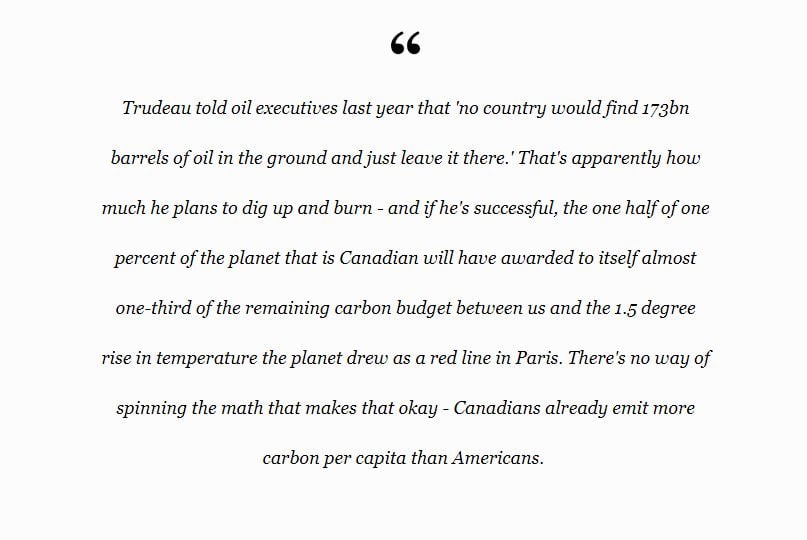 We are rightly concerned about the possible role of Mohammed bin Salman in the murder of Jamal Khashoggi — as we should be. But next to the calamitous consequences of Trudeau’s environmental policy, that gang of assassins at the Saudi consulate in Istanbul look like a clowder of street kittens.

Such disingenuous and barefaced hypocrisies are not accidental but are, in fact, definitive to characters like Trudeau. “Justin Trudeau is all talk and no action on First Nations Rights,” we read in a pointed piece by Ryan Khurana on HuffPost Canada.

While Trudeau is good at making vacuous promises with fake sentiments, his actual record is far less rosy than he wishes to project. More specifically, Trudeau’s government has “neglected the rights of First Nations in pushing pipeline projects through Squamish territory, raising concerns for the environmental damage to the land. Trudeau’s proposals may result in the replacement of the nearly 150-year-old Indian Act, weakening even further the land rights of First Nations communities.”

This is after a whole electioneering song and dance about being truly apologetic for the terror white European settler colonialists had unleashed upon the First Nations, similar to the one Trudeau’s favourite Zionists have practised upon Palestinians. His lies about his commitment to the rights of the First Nations, in other words, become transparent by his racist position against the Palestinians.

Such shameless behaviours are not accidental but in fact definitive to Trudeau’s politic. “First Nations leaders want Prime Minister Justin Trudeau to know their schools still can’t afford science labs, sports equipment or Indigenous language programs.” This accurate assessment of this duplicitous politician is despite the fact that he has promised them $2.6-billion in support more than two years ago when he wanted their votes.

Both Palestinians in their homeland and First Nations in Canada are nuisances for Trudeau — exposing his lies, underlining his hypocrisy, marking his sleek racism.

“We are a people, Mr Prime Minister, who love life, stability and prosperity” — Palestinian official Basem Naim recently wrote in an open letter to Trudeau as if he listens, reads, or cares. “We do not desire death or foment war. We are not attacking anyone. We are not violating the borders of anyone. On the contrary, we are banging on the gates of a giant prison, demanding our freedom and a decent life.”

This is not of course accidental. When it comes to the basic human rights of Palestinians, and excusing and protecting the racist apartheid state of Israel, as those who follow Canadian politics closely know, “Trudeau is Harper’s pupil.” For Canadians who have voted for Trudeau, he may appear as the polar opposite of the notorious Zionist Harper. But when it comes to Palestine, and consistently siding with Israel at the UN, there is not much difference between the two.

“Canada’s silence on Israel’s crimes isn’t surprising,” Andrew Mitrovica recently wrote in an op-ed for Al Jazeera, “Canada has always been silent when Israel decides to kill as many Palestinians as it wants to, for any reason.

“Canada remains silent while Israeli snipers continue to shoot Palestinian children in the head and legs with “butterfly” bullets —PA meant to kill instantly and disfigure irrevocably — for waving Palestinian flags on what remains of Palestinian soil.”

What’s Hecuba to him or he to Hecuba?

One could go on with the examples exposing Trudeau’s hypocrisy carefully hidden under the veneer of progressive politics, handsome smiles and bogus liberal rhetoric. One could also scream in frustration like Bill McKibben: “Stop swooning over Justin Trudeau. The man is a disaster for the planet.”

But the point here is not to pick on one Canadian politician as opposed to scores of other creatures equally if not even more dangerous to sustainable human life on this planet. The point rather is to see how, while obnoxious loud-mouths like Trump or Netanyahu may demand and exact more than their share of global attention, those who are passing as more decent and trustworthy politicians are in fact more dangerous to decent human life on earth.

What matters are the basic issues of human decency and planetary sustainability of life; and, on such crucial scores, Justin Trudeau is as an existential threat as Trump if not more so. I say even more not as a matter of rhetorical device but simply to mark how the velvety surface of Trudeau’s demeanour and the likes of him successfully conceal their ugly characters detrimental to human decency on this earth.

The manufactured binaries between charlatans like Trump on one side and Trudeau on the other are a trap within which the calamitous collapse of neoliberal politics is chasing after its own tail and, dizzy with that chase, it denies our future any meaningful choice that lies way beyond such false options. — Al Jazeera