Do you remember the Three Course Dinner chewing gum from Willy Wonka? How about Bertie Bott’s Every Flavour Beans in Harry Potter?

Packing such enormous flavour into a tiny morsel sounds like the work of fiction, but intensely flavoured microgreens are real ingredients now appearing on the tables of Jo’burg’s trendy bistros and fine dining restaurants.

Urban gardener and chef Elisha Madzivadondo first started growing microgreens in 2013. After more than 10 years of working as a butler in the affluent Cape Town suburb of Camps Bay, Madzivadondo resigned to follow his true ambition.

“I loved working as a butler,” he says, “but I wanted to follow my passion for food and keeping people healthy.”

Madzivadondo grows microgreens and sprouts in a small urban garden in Pinelands, Cape Town. He believes that conventional farming uses too many fertilisers and insecticides, which consumers need to be careful of, especially when eating raw food.

“The idea to grow microgreens was to stay away from conventional vegetables, and to grow food free from pesticides, herbicides and fertilisers.

“Farmers have let us down,” he adds. “The only way to trust is to grow your own.”

When planting, Madzivadondo uses his own homemade compost because he distrusts store-bought topsoil.

“Microgreens are the future,” he says. “We need to teach kids about it in schools.”

He first started selling food at markets from his food stall, the Sunshine Food Co. The vegan food stall quickly grew in popularity and attracted the attention of a Sea Point doctor who helped Madzivadondo to start his own restaurant in 2017. The small restaurant, in the Three Anchor Bay Medical Centre in Cape Town, boasts vegan burgers, which are 80% microgreens and sprouts. The other 20% consists of butternut and sweet potato.

Microgreens are not only delicious and packed full of flavour, they’re also rich in nutrients. Lauren Roodt, founder of the garden consulting service the Urban Farmher, first started growing broccoli microgreens after her girlfriend fell ill when a bacteria called Helicobacter pylori entered her stomach. Roodt discovered that the broccoli microgreens help to kill off the bacteria.

“A handful of broccoli microgreens has the same density of nutrients as a whole head of broccoli,” Roodt explains. “Because of their rapid growth, microgreens are a concentrated nutrient source and are packed with beneficial enzymes, vitamins and minerals.”

She is a kitchen-garden coach who helps people to start the journey of growing their own food. She offers consultations at people’s homes, helping to tailor their gardens to suit the space and light. The product she’s developed, Grow-It-Yourself Microgreens Kits, is useful for a gardener with a black thumb.

“I started the business with the intention to encourage people to start growing their own food, educate [them] about the health benefits, and also the therapeutic benefits of growing their own garden,” says Roodt.

The easy-to-grow kits have proven popular with dieticians, who buy them for their clients. In many instances, clients with an aversion to greens are advised to try eating microgreens because they’re less intimidating than a plate of veggies, yet contain the same quantity of nutrients.

Shaun Miller, co-founder of Urban Microgreens, is a Johannesburg-based producer of microgreens. The organic urban farm grows 16 varieties of microgreens and supplies more than 300 shops, chef schools, hotels and restaurants. On a tiny plot of land, smaller than the average suburban backyard, 2 000 punnets are harvested a week. The microgreens are grown indoors vertically under monitored conditions. This method redefines the term farm-to-table because, from seed to harvest, the microgreens reach the restaurant within five days. 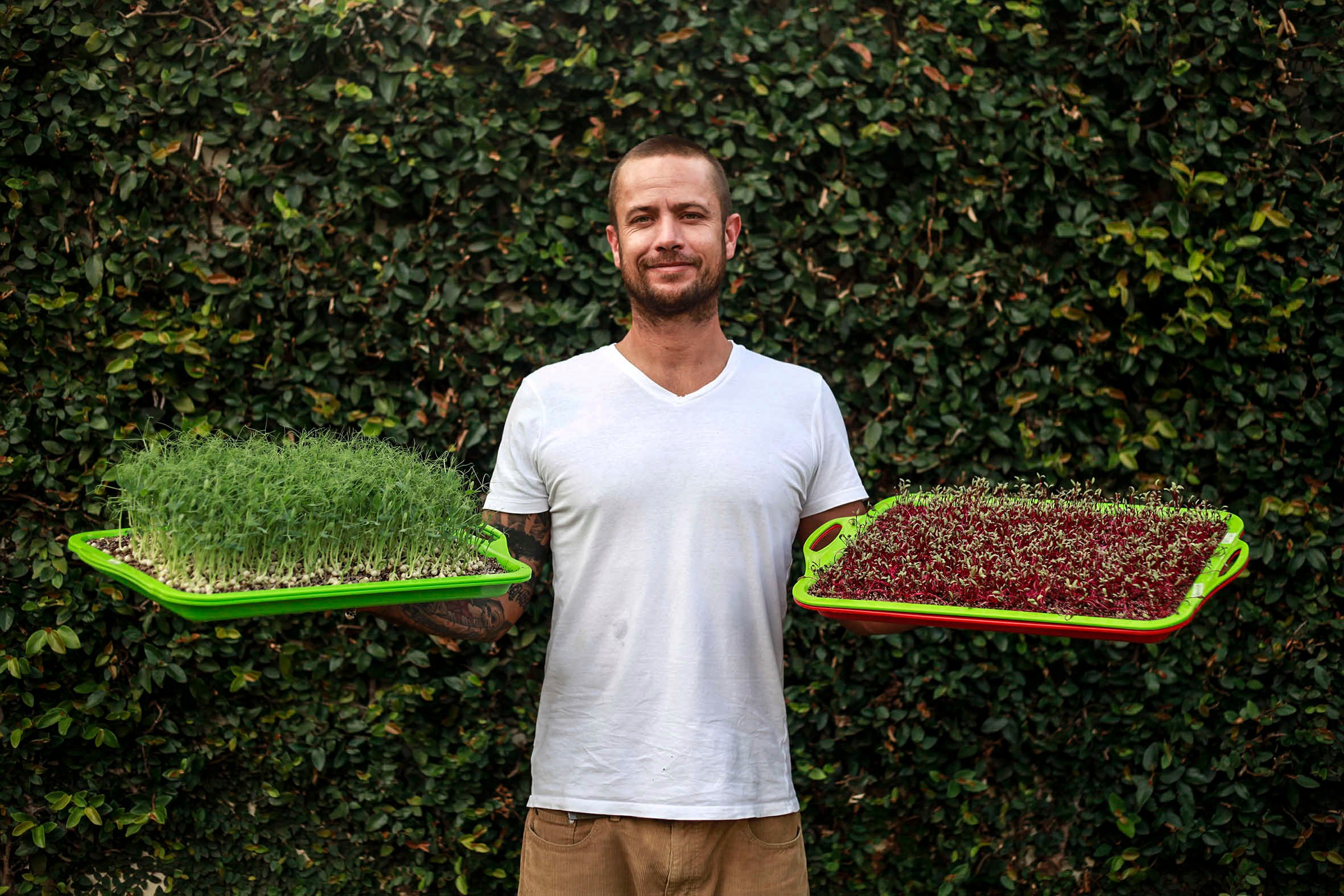 Shaun Miller grows microgreens such as carrots and amaranth in Johannesburg. (Oupa Nkosi/M&G)

To be considered a true microgreen, the plant’s shoots must be harvested before they become baby greens. Once they grow further, they lose some of their nutritional benefits.

Microgreen farming and retail is new in South Africa, so the industry is not yet properly regulated. Miller has seen baby leaves being sold as microgreens. The extra leaves add weight and the producer can therefore reduce their sale price per kilogram. Miller says producers are getting away with this because the industry is inadequately monitored.

Microgreens farming is an effective method of growing and harvesting produce for farmers who do not have adequate land or resources for large-scale farming.

Nonhlanhla Mokoena-Chimhandamba, who is with the urban-farming team Urban Grow, started growing microgreens in hydroponic tunnels in 2016. At the time, the market for microgreens was small and people wouldn’t buy in bulk. Once the team acquired land in Midrand, they stopped producing microgreens and started growing spinach and baby marrow because of a higher demand from hotels and big retail chains.

Mokoena-Chimhandamba says that microgreens farming is more predictable than outdoor farming. Unlike microgreen farming, where the climate, light, and water can be controlled , outdoor crops are susceptible to weather damage such as hail and strong winds.

Until recently, microgreens were only used as garnish — much like the dreaded curly parsley of the 1970s. Now that people understand the flavour and benefits of microgreens, they’ve become the hero of the dish rather a pretty touch that’s pushed to the side.

Miller’s very first harvest of microgreens was used in a sandwich. He made a steak roll filled with black mustard microgreens. “It was the best steak roll I’ve ever had in my life,” says Miller. “The mustard greens taste like dijon.”

Chefs love the flavours and textures of microgreens and have started to custom order for their restaurants. “They’ll say they’ve heard about a certain bush or flower and ask if we can grow it,” says Miller. 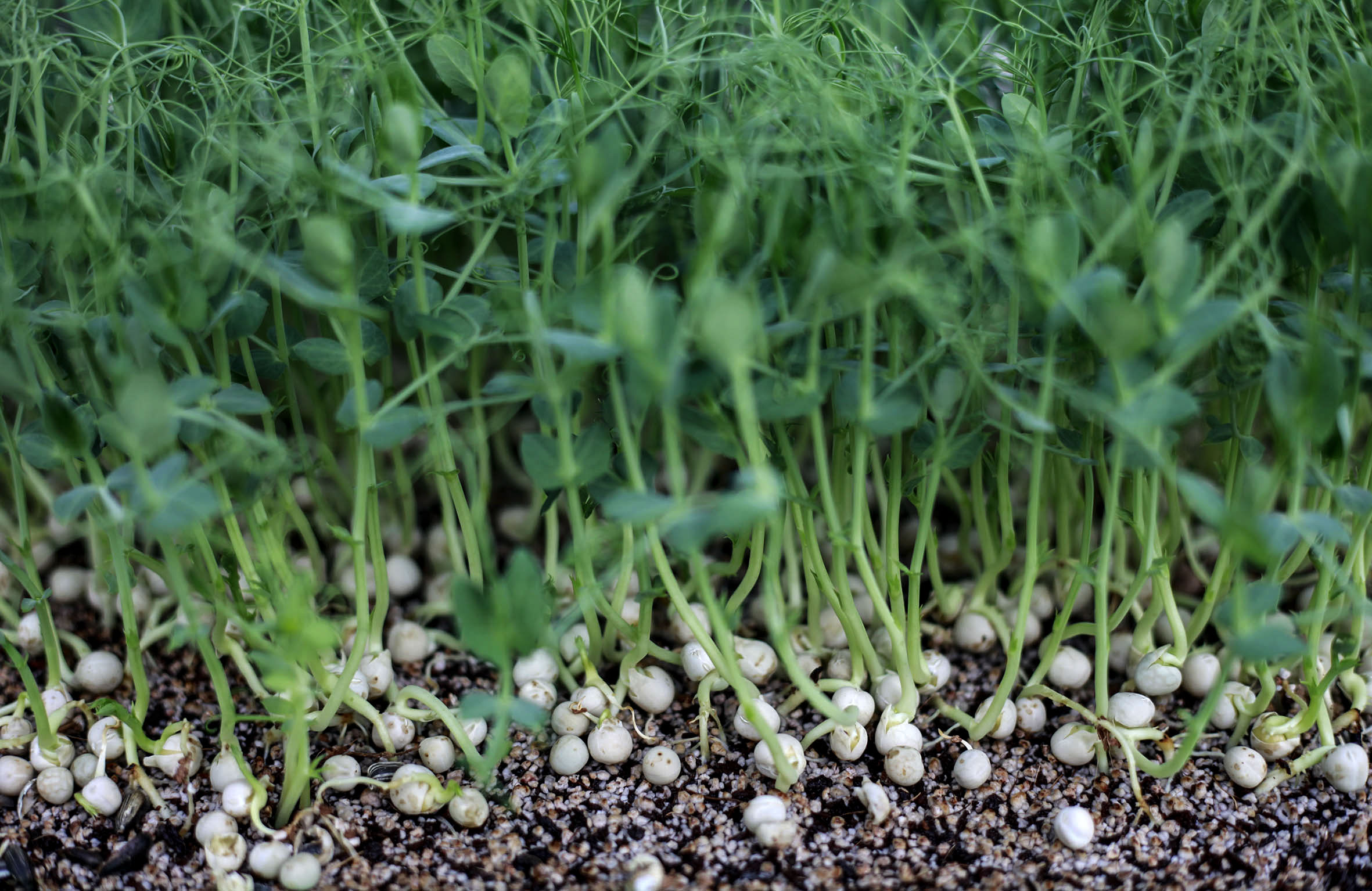 Microgreens, which are harvested after sprouting, aren’t just pretty, they’re concentrated nutrients filled with flavour. This includes amaranth, which is commonly known as pigweed. (Oupa Nkosi/M&G)

Urban Microgreens have received requests for greens such as oyster leaf and opal basil. Another chef asked them to grow Alaskan nasturtiums, a plant with red, orange and yellow flowers and variegated leaves. They are considered highly nutritious because of their concentration of vitamin C. Miller says that, after four harvests, the team knows the product is consistent and can start supplying to the restaurant.

Chefs are using microgreens in dishes throughout the day — on avocado toast for breakfast, in wraps and salads for lunch, and in burgers for dinner.

“We choose to work with microgreens as it elevates the flavour of dishes due to its freshness and flavour intensity,” says chef Andrew McKinnon from fine dining restaurant DW Eleven-13 in Dunkeld West, Johannesburg.

Greig Walker, the owner and head chef of Cnr Cafe in Craighall Park, Johannesburg, says he uses microgreens for their flavour, aesthetic beauty and their nutrient concentration. “Their flavour is amazing and texturally they enhance any dish,” he says. “Their size allows all the above without compromising the dish.”

Gourmet street-food team Sumting Fresh has used edible flowers and microgreens since serving their first dish, Gujon Chicken. Andrew Leeuw, co-owner and chef, says they started at the Arts on Main market in 2012. Since then, they’ve been serving at corporate functions, events and other markets and have opened a restaurant in Norwood, Johannesburg.

With a growing market among chefs and foodies, microgreens in different varieties are going to become more readily available in South Africa. With an abundance of flavour and big health benefits in a tiny package, they seem to be way more than a passing foodie trend.