Following President Cyril Ramaphosa delivering his State of the Nation address (Sona), the Mail & Guardian — in partnership with Rosa Luxemburg Stiftung — held a critical thinking forum at Workshop 17 in Cape Town to unpack the speech.

Leading the discussion was Lester Kiewit, the head of the Mail & Guardian’s Cape Town bureau. He also hosts the nighttime talk show Tonight with Lester Kiewit on 567 Cape Talk. Lester has been plying his trade as a journalist for more than 15 years. Kiewit was joined by editor-in-chief of the M&G, Khadija Patel. Patel is also a co-founder of the The Daily Vox and vice chairperson of the Vienna-based International Press Institute (IPI).

Joining them was Angelo Fick, the director of research at the Auwal Socio-economic Research Institute (ASRI). Before joining ASRI, Fick spent nearly half a decade as a resident current affairs and news analyst in broadcast television. He also spent 20 years teaching across a variety of disciplines in the Humanities, Sciences, and Applied Sciences in universities in South Africa and Europe. His research is informed by critical ‘race’ theory, feminism, and poststructuralism. He has written widely on post-millennial post-apartheid South Africa’s political economy, and remains interested in broader issues of democracy, justice, and equality. To represent “the youth” the panel was rounded off by Pearl Pillay who is the managing director of Youth Lab, a national youth-led think tank that aims to mainstream youth participation in community development and policy making. Pillay is also an activist and youth development practitioner.

In her welcome address, Patel began by thanking those gathered and issued a call-to-action. She noted her surprise at President Ramaphosa saying he was horrified by some of the revelations which have emerged from the Zondo commission of inquiry into state capture. Ramaphosa was a member of that administration and journalists in South Africa have been uncovering malfeasance over the years. She asked those assembled to support independent journalism and to actively continue to question the powers that be.

To kick off the discussion, Fick noted Ramaphosa quoted Lady Macbeth’s “milk of humanity” quote, quipping that in a few months he would be more inclined switch to ‘Julius Caesar’ because he is yet to weed out the Brutuses in his party. The discussion focused primarily on the year since Ramaphosa assumed power and his seeming inaction in appealing to young people, corruption and what appears to be a consideration towards business and not education. 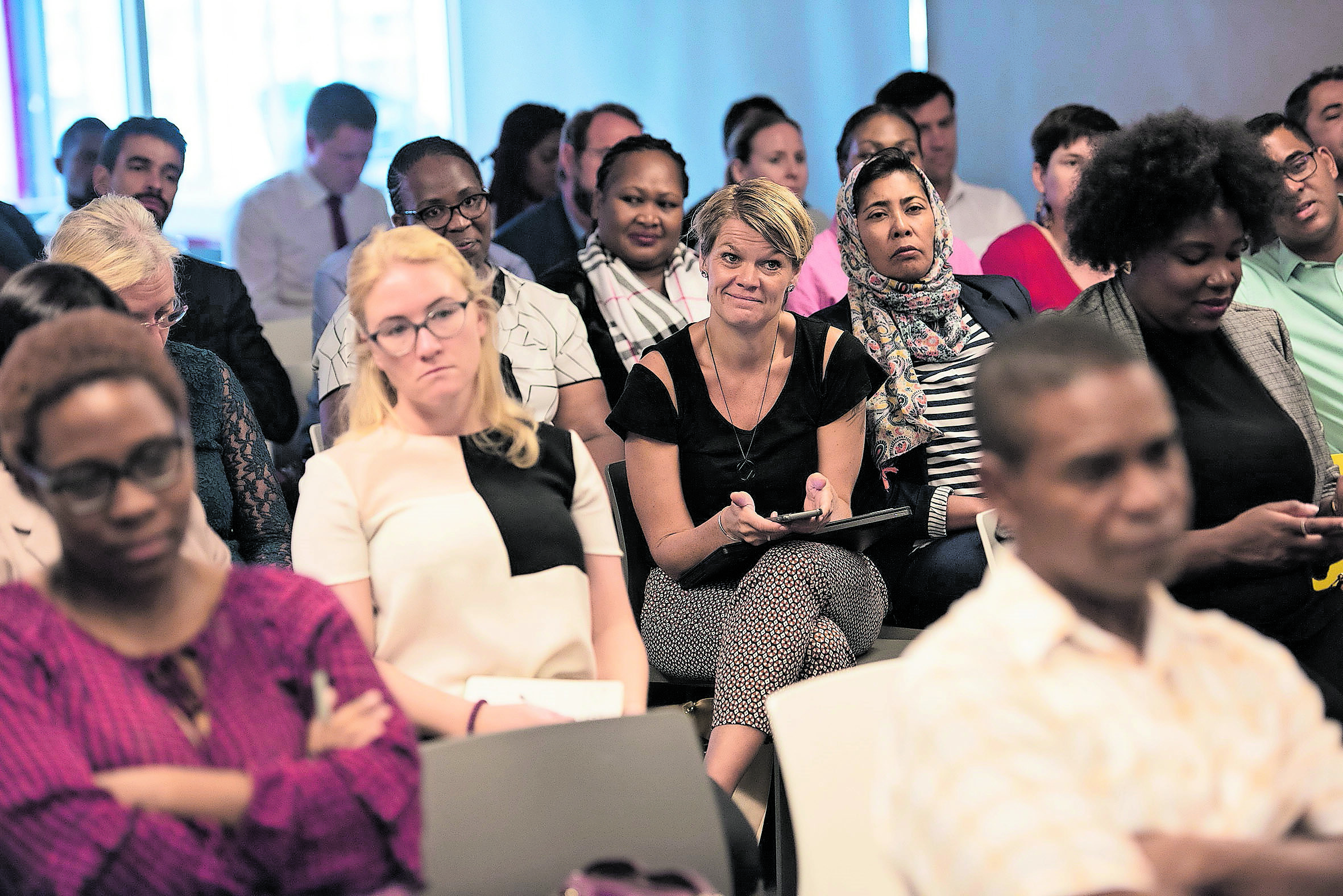 The announcement of May 8 being the date of the national elections prompted Pillay to explain why she — like many other young people — are not going to vote. She believes there is not one party in South Africa that has effectively appealed to youth voters who feel it is more of the same until it’s time to campaign. Though Ramaphosa is a man who has made it: being that he is from Soweto who now occupies the highest office in the country, young people’s aspirations go further than making a billion rand. Fick was of the opinion that people should vote but if no political party was appealing, he suggested that voters spoil their ballot in order for South Africa’s politicians to see how dissatisfied citizens are.

Fick and Patel were in agreement that the number of commissions of inquiry and panels currently underway give the sense that the president is running the country by committee. Though it is a welcome deviation from his predecessor’s unilateral decision-making style, there is a perception that he may need to take more control in leading.

And while there were many key takeaways from the event regarding Ramaphosa cosying up to business and foreign investors, one of the key points we are left with is: Ramaphosa has his hands full uniting an increasingly intolerant country led by an ANC that has not passed muster.

To close off the discussion, Rosa Luxemburg Stiftung’s Graham Robert Pote explained the reason why the foundation supports this type of event to foster political debate and discourse. He noted that Patel’s opening address seeking support for independent journalism is especially important. If we are expected to have the right to freedom of speech, we need to have a reliable source of information otherwise what is the value of that speech, Pote asked. He believes South Africans are seasoned political debaters, but urged that as we near the elections, not lose our humanity and sense of responsibility to be fair and respectful towards each other’s opinions.