The Investec Cape Town Art Fair (ICTAF) has most certainly seen an expansion in its layout, with the two most impactful creative labours being delivered outside of the main venue of the Cape Town International Convention Centre. One was a quick bike ride away in the CBD at WhatIfTheWorld, the other a lengthy car ride around the mountain at the Norval Foundation.

The flesh, the self and the word have the power to mediate histories of unique localities. For multidisciplinary artist Thania Petersen, the word to begin with is Iqra, which means “to read” in Arabic. Petersen is serving us educational tea in her first solo show at WhatIfTheWorld gallery, in the way your aunty or godmother would. Brewed with immaculate detail, and soothing with its vivid colours, Iqra invites the audience to begin again and open up.

Petersen’s new body of work is composed of a short film titled Baqa, photographs, embroidered prayer mats and an instillation trailing from the entrance of the gallery space – a thread of contestation pulling you out of the darkness.

At a walkabout during the art fair, Petersen recounted the brightly coloured days when she picked up her grandmother from the airport as she returned home from Mecca, the holy city according to the Islamic faith. Fast forward two generations, and Petersen has noticed a loss of colour, as families at the airport fetch their loved ones from an integral journey in the Islamic faith, dressed in black. This fading to black represents for Petersen a mourning for the loss of love, which coincides with a rise in extremism across all religious groups. The prayer mat is the most intimate space of the Islamic faith, and Petersen warns that the infiltration of this space by politics exported through literature and education, is dangerous. She worked through a process of photography and embroidery, capturing images of her spiritual community’s prayer mats from their homes, along with some antiques. In her use of embroidery as a tool for cultural preservation, Petersen has weaved together diasporic maps which reflect her mixed Afro-Asian heritage. As a South African woman grounded in the Islamic faith, Petersen’s point of departure is not a space of absolute otherness.

A compelling negotiation of knowledge, faith and grace is the artwork Al Hurra which means, Women Who Bow To No One. Of course, I found myself immersed in this tapestry which features bejewelled women in all shades of melanin, women who are underrepresented in our history books. Petersen not only embodies but also exhibits that the geographies of women’s struggles open up new perspectives on geo-political and religious contexts. In what felt like gazing into a newly discovered past connected to mine, I learnt of some powerful apparitions of the Divine Feminine. One of them is Sayyida al Hurra whose family was exiled from Granada (Spain) to Morocco as a consequence of Spanish and Portuguese conquest and the spread of Catholicism. Al Hurra later became a Queen of Tétouan in Morocco and as an act of vengeance against her enemies on the other side of the Mediterranean, the most notorious pirate of the 16th century. 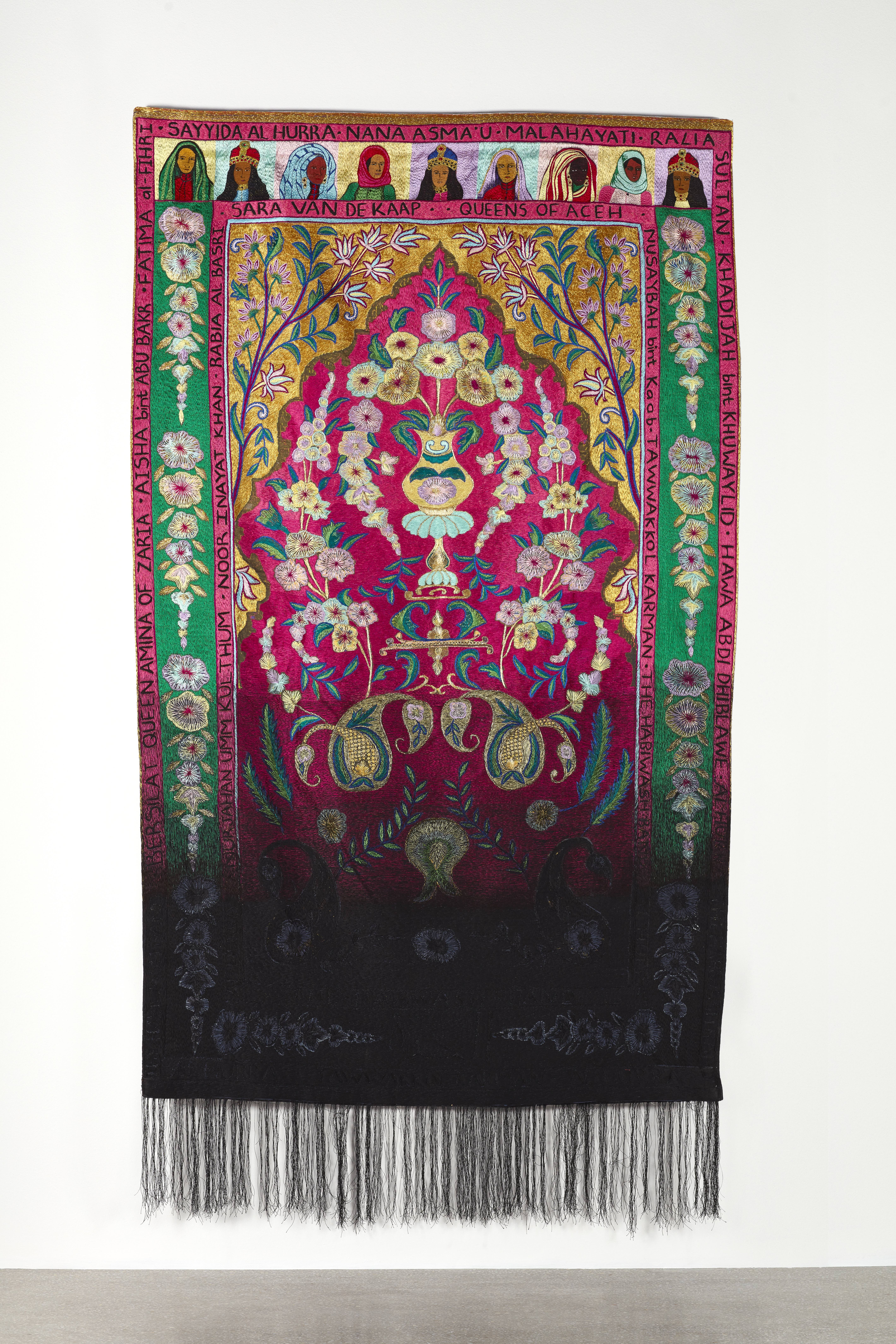 The conditions of being human give rise to the complex feelings and legacies of people on the African continent. Indeed, the word carries burdens of what the flesh endures in times of political rupture. Even though Kwame Nkrumah proclaimed during the ensuing years of Ghana’s independence, that “We face neither East nor West; we face Forward,” it is clear that both the West and the East continue to gaze upon Africa and influence the continent’s position in the global economy. It materialises that the production of commodities in Africa is reflected in the production of art. For Ibrahim Mahama, the 20th century was a time when museums, to a very large extent, determined how artists and forms of art were produced. Presently, we are forging a new era where “it is very important within the 21st century to create forms which do not exist yet,” he says.

Currently installed at the Norval Foundation is Ibrahim Mahama’s Labour of Many. For Mahama, scale and attitude is determined by the world around us, not by the confines of the art world. Making work outside of the institutional context adds integrity to the artistic praxis because it is not created for human consumption. In the case of Labour of Many, the commodities which were once contained in the jute sacks and later consumed, become part of the experience. The memories of the objects themselves serve to bring new conversations into art institutions. 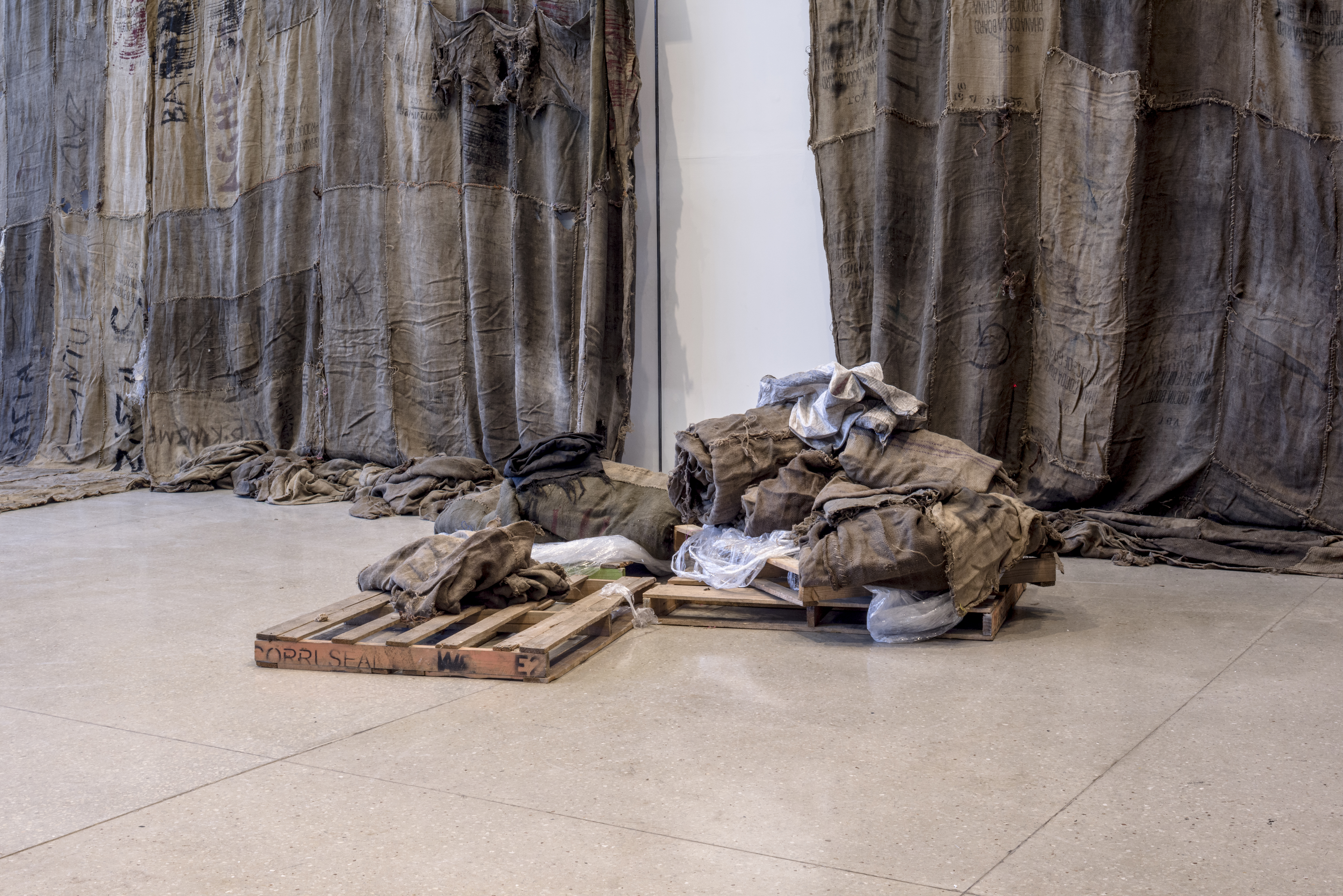 Labour of Many by Ibrahim Mahama. Photo: Dave Southwood courtesy of the Norval Foundation

Labour of Many is a multisensory experience. The walls of the Norval Foundation’s largest gallery space (reaching nine metres tall) have been veiled, along with the floor, in the stitched together jute sacks. One of the effects of this is an encompassing smell which activates different memories.

“It triggers other things just aside the visual. So if someone who is maybe visually impaired, comes across this kind of installation, maybe the smell of it alone and the texture and the tactile nature of it… it’s a different experience or a different way of getting pulled into the work” says Mahama. 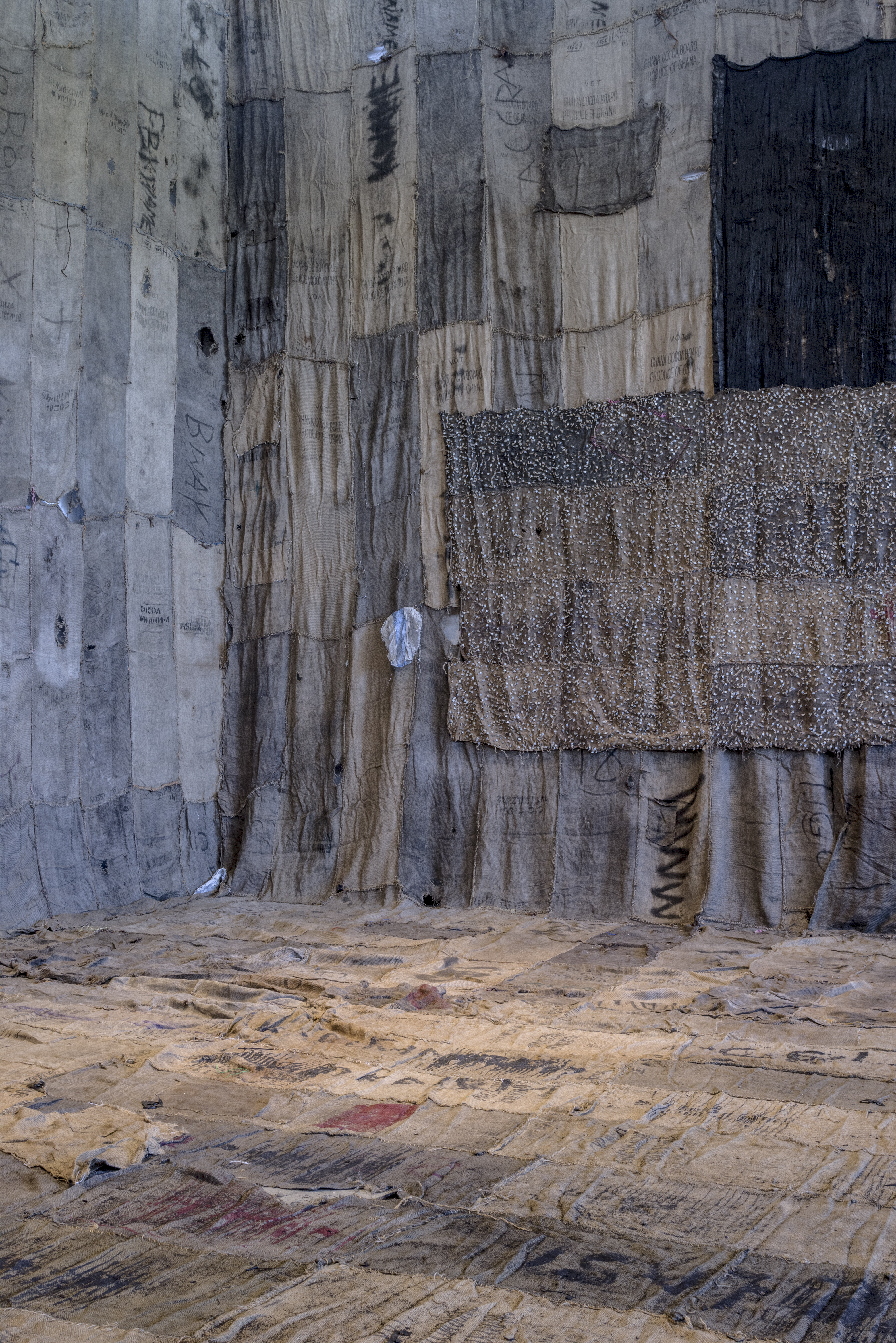 A view of Ibrahim Mahama’s Labour of Many. Photo: Dave Southwood courtesy of the Norval Foundation

The memories that Labour of Many triggered in me were excitement bursting right above my ribcage as I hopped along in a sack race at school in Maputo, which was coincidentally the peak of my chocolate addiction. The jute sacks, imported from India or Bangladesh by the Ghana Cocoa Board, are used only once in the transportation of cocoa within Ghana. The sacks are then repurposed, finding afterlives to transport maize, rice, yams, charcoal and, even further down in the timeline, to cover car engines.

One section of the installation employs black material stained by charcoal which still has pieces of metal attached to it. When touched, it leaves grease on your fingers. Interspersed with the section of black is a section of quality control tags which come from single jute sacks. There are many of them, threaded with rope and then stitched to the sacks. This painstaking detail in the work is made possible with the help of Mahama’s many collaborators, including Francis Djiwornu, who was integral to the installation set-up, and many other collaborators from his artistic community located in both Tamale and Accra in Ghana. The traces of the collaborators are also apparent on some of the sacks, marked with their names. The labour process is intensive and carries the bulk of the meaning beyond the finished installation. Mahama explains that as his artistic praxis evolved, he wanted to use “objects which have painterly qualities as a way of a new expression… but some of [the jute sacks] I just wanted to leave them as they are but focus on the labour and the people that I work with to somehow determine the composition.” Details of Ibrahim Mahama’s Labour of Many. Photo: Dave Southwood courtesy of the Norval Foundation

“Mahama’s singular practice makes the everyday monumental, honouring and remembering people who are rarely commemorated in the visual arts,” says Owen Martin, chief curator at the Norval Foundation. Monumental is a word that will frequently be attached to Mahama’s practice, his previous work being a testament to this, having draped the exteriors of the National Theatre of Ghana in Accra, the Kunsthal Charlottenborg in Copenhagen, and the Former Food Distribution Corporation in Accra. The relationship between the buildings and the commodities that the jute sacks have carried is not immediately obvious, and yet Mahama and his collaborators find ways to poetically convey the relationship.

Mahama borrows from history from an architectural point of view and is intrigued by new spatial dimensions. There are formal, political and aesthetic motivations behind the choice of buildings which Mahama works within and around. “Although you are covering the thing, when you take the cover away, it allows you to relook at it from another perspective. But at the same time when you are covering it, it brings out certain specific forms that ordinarily we wouldn’t have paid attention to,” he says.

Mahama started his practice off as a painter, and still understands his praxis as a form of painting. During an Artists in Dialogue talk on Saturday afternoon (February 16) during the ICTAF, chief curator at Zeitz MOCAA, Azu Nwagbogu, connected Mahama’s praxis to “the future of painting.” With the installation at the Norval Foundation in particular, “the principles and the history of art begin to change in a way that you can view certain aspects of [the works] almost as if they are paintings,” says Mahama.

Reminding us that material culture is made of memories and techniques of creative labour which can also serve as a knowledge system to be passed on through collaboration, Mahama, along with Petersen and many other artists at ICTAF, are urging us towards the hopeful futures.

We can now recall the Mediterranean as the site of women’s struggles for emancipation. It goes deeper than the Black Atlantic. We can also recall the humility and lifespan of materials which serve infinite purpose in our lives.

Art and the heirs of redness