Rhoda Mulaudzi and Refiloe Jane wandered into wonderland last year. They found a place where thousands routinely flock to support women’s football games, where its stars struggle to walk through the streets without being recognised.

It hurts a South African to give any sporting credit to Australia, but we can’t deny they’re doing this part right. It’s where the two Banyana Banyana players have found a home.

Looking back on their maiden season Down Under, neither can fault their decision to take the plunge — despite finishing eighth out of nine teams in the W-League.

“We had a good season with Canberra United,” Jane says. “Even though we didn’t end up where we would have liked, we have clear positives to take out of the league. When we went there we didn’t know if we were going to be regulars or not. For us to go out there and start each and every game, it clearly shows that we were working very hard and adding value to the team.”

Months after the fact, the story of how the move came about still seems improbable. An admirer of the duo, Tshepo Vhafuwhi Makananise, inundated United coach Heather Garriock with YouTube links of them. Garriock eventually acquiesced and offered a trial to the South Africans in August. The catch was that the club would not pay for their visit.

Flights, accommodation and food are hardly negligible expenses when someone visits Australia with rands in their pockets, and the decision to go was not automatic.Fortunately for Mulaudzi, Jane approached her Banyana teammates, who collected enough money to tide her over for two weeks. At the time Mulaudzi had not been involved in the national setup since 2017.

Passing the trial and impressing Garriock — who emphatically said they did so — was only the prelude to their journey. Chapter one would see them having to acclimatise to an uncharted environment.

“When you’re playing professionally, it’s not the same as playing in the amateur league,” reflects Mulaudzi. “There you have to work hard. It’s not just about standing there and thinking things will come easy. Technically, and going forward as a striker, I think I’ve learned a lot. I’ve also grown up a lot mentally on the field. Unlike when you are here, you don’t have that opportunity to showcase your God-given talent, but that aside, you can [still] make it. When you’re playing with the likes of best-in-the-world Sam Kerr, you can see that you’re doing something better and learning every day.”

The forward is alluding to the fact that South Africa does not have a professional women’s league. 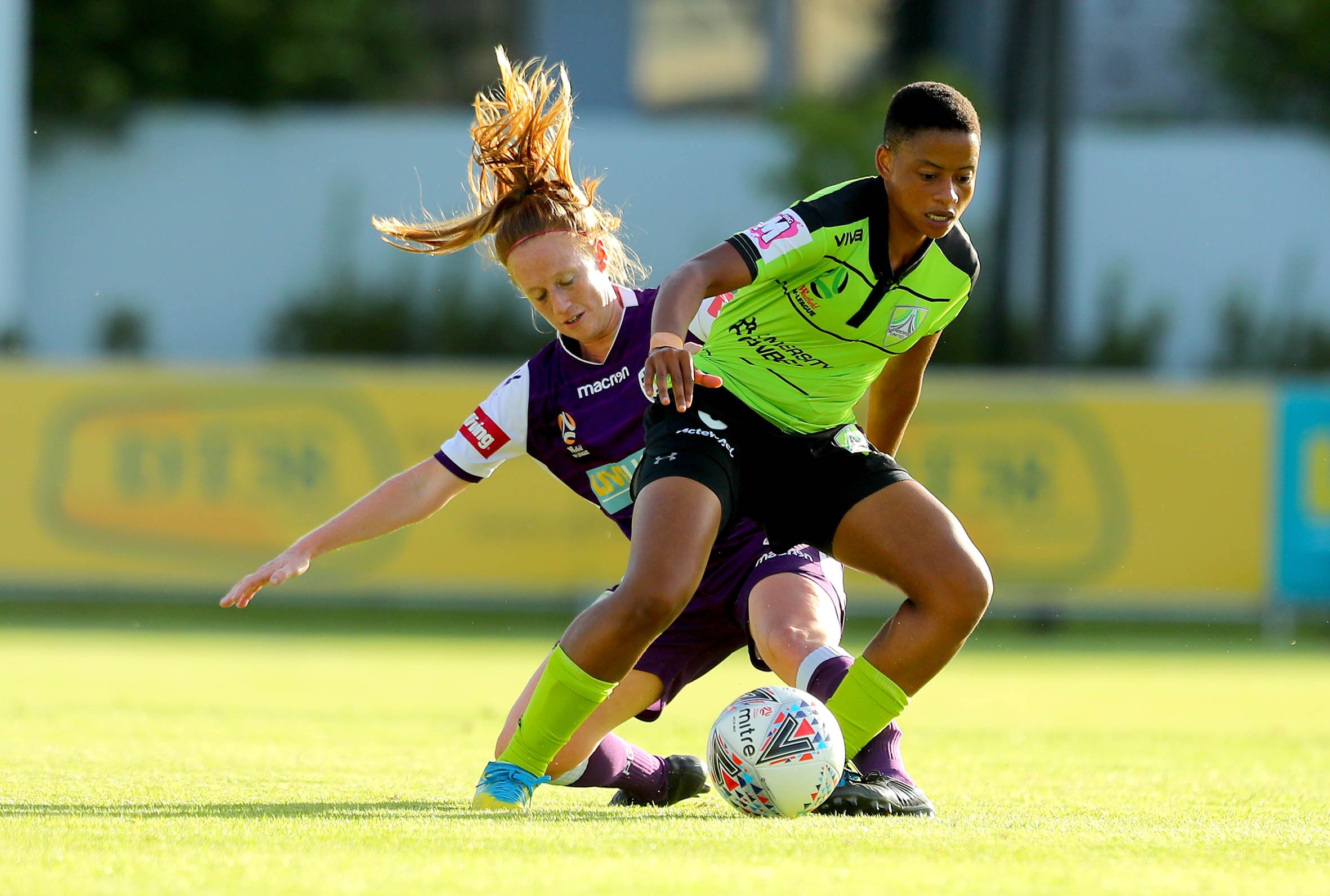 It’s hard to understand the shock to their system that the Australian visit presented. When their male counterparts earn an overseas move, they go having at least played in packed stadiums. They’ve experienced fan scrutiny and felt the weight of being a professional. The women went with none of that. They were in a foreign land and asked to perform regularly at standards they’d never had to reach.

Softening the blow for Jane and Mulaudzi was the privilege of going to Australia together. Friends for 13 years, the two have shared multiple clubs over their careers and neither could have picked a more suitable travel partner. Off the pitch, they regularly hung out in Canberra, enjoying more introspective pleasures such as quiet dinners and going to the movies.

Once they settled in, it was time to soak up the perks of playing in a nation that takes the game seriously.

“The fans are passionate about women’s football,” Mulaudzi says. “Normally when we’re playing at our home ground, McKellar Park, it’s always packed. The first time playing when there’s a lot of supporters, it gave us courage. If you check, in all of our home games we’ve never lost. They are very passionate. I remember the time I went there to watch their women’s national team. It was packed with 30 000 fans. You can tell those people are serious about following women’s football.

“Everything there is professional. Media … everything is professional. When you are walking down the street or at the mall, people recognise you. People treat you like their star. They appreciate what you’re doing for them.”

Hearing about the pair’s experiences, it’s apparent that we could never replicate them without the full buy-in of everyone from ticket holders to management structures. Although the South African Football Association should be chastised for their dilly-dallying in establishing a full-time women’s league, no single entity has the power to snap their fingers and transport us to where we’d like to be.

When Canberra United players climb into their cars they’re greeted by the radio retelling their latest exploits. Driving down the highway, their images stare down at them from billboards advertising their next game. Picking up The Canberra Times at the local store will yield an in-depth feature on one of the players — “Canberra United star Mulaudzi the granddaughter of South African king”, read a recent headline, for example. Social media feeds offer no escape.

That is professional football. Such a climate can only be fostered from long-term, widespread commitment.

“We always call out to the media to profile women in sport, because people can’t support what they don’t know,” Jane says. “If people can
go out in numbers to support women’s football, then we can play our best and know that we have what it takes to compete at the highest levels.”

Australia’s deliberate efforts to pour attention and funds into the game are reflected in the Fifa Women’s World Rankings. They sit sixth — a position completely out of whack with their historical footballing pedigree (the men’s side are 42nd).

Banyana were unable to hide the contrast in progress this month. They could only muster one draw alongside their three losses in the Cyprus Cup. It’s a terrible return for the team that were hoping to use the competition to prove their readiness for June’s World Cup.

We have seen huge improvements over the past year but they have still not taken us close to the elites.

That can only come with time and a collective decision to embark on this path together. We rightly celebrated when Jane and Mulaudzi became the first South African women to play in Australia, but real success would be removing the need for our players to go anywhere at all.

The rise of SA players abroad is good for Banyana